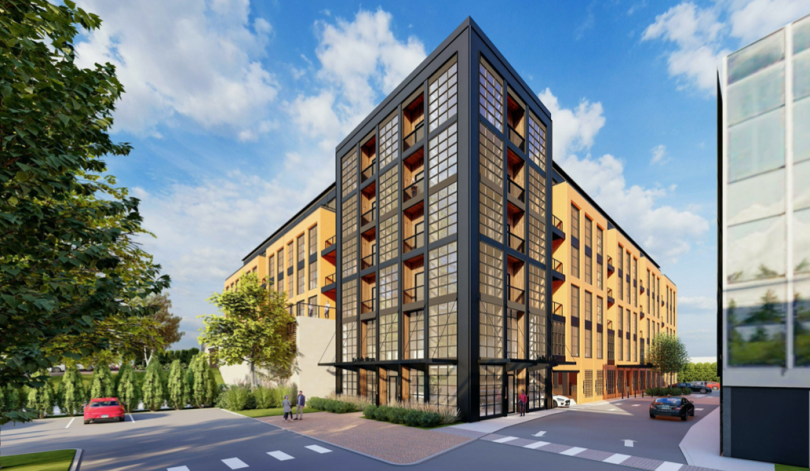 An application that will be submitted to the West Hartford Town Council includes a building with luxury condominiums and garage parking, and another mixed use building to include a significant number of workforce housing units. 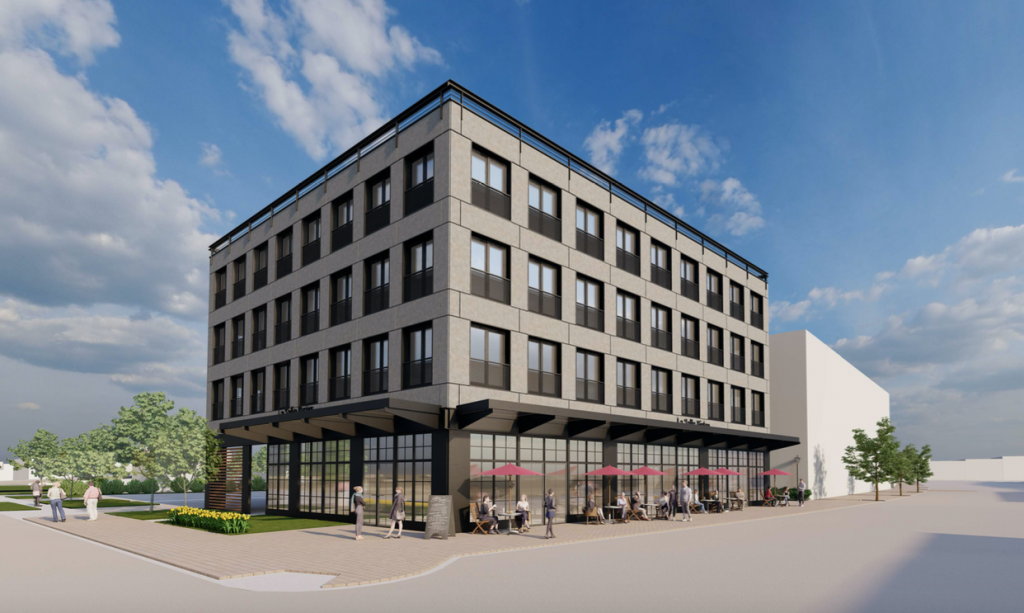 The Arapahoe Group LLC is is planning to submit an application for consideration to the Town Council which would create more than 80 residential units that includes high-end condominiums, workforce housing, commercial space, and garage parking in West Hartford Center.

“People are eager to live in West Hartford Center and we’re excited to bring this luxury residential development to the town,” said Marc Lewis, principal of Lexham LaSalle Development LLC – one of the partners of The Arapahoe Group, LLC, which will be submitting the application. The project to be submitted includes two separate buildings – Center Park Place and 75 LaSalle Road.

“Encourage infill development on vacant and underutilized lots,” is one of the goals of West Hartford’s 2020-2030 Plan of Conservation and Development, and Lewis said this project does exactly that, while also adding to the town’s grand list and affordable housing stock.

“The location of the project is currently an assemblage of old asphalt parking lots. Center Park Place and 75 LaSalle will complete the streetscape and add to the vibrancy of West Hartford Center,” Lewis said.

The project would be constructed in what is now the parking lot for 65 LaSalle Road (Webster Bank building) as well as in the lots behind the buildings on the west side of LaSalle Road and north of Arapahoe Road. 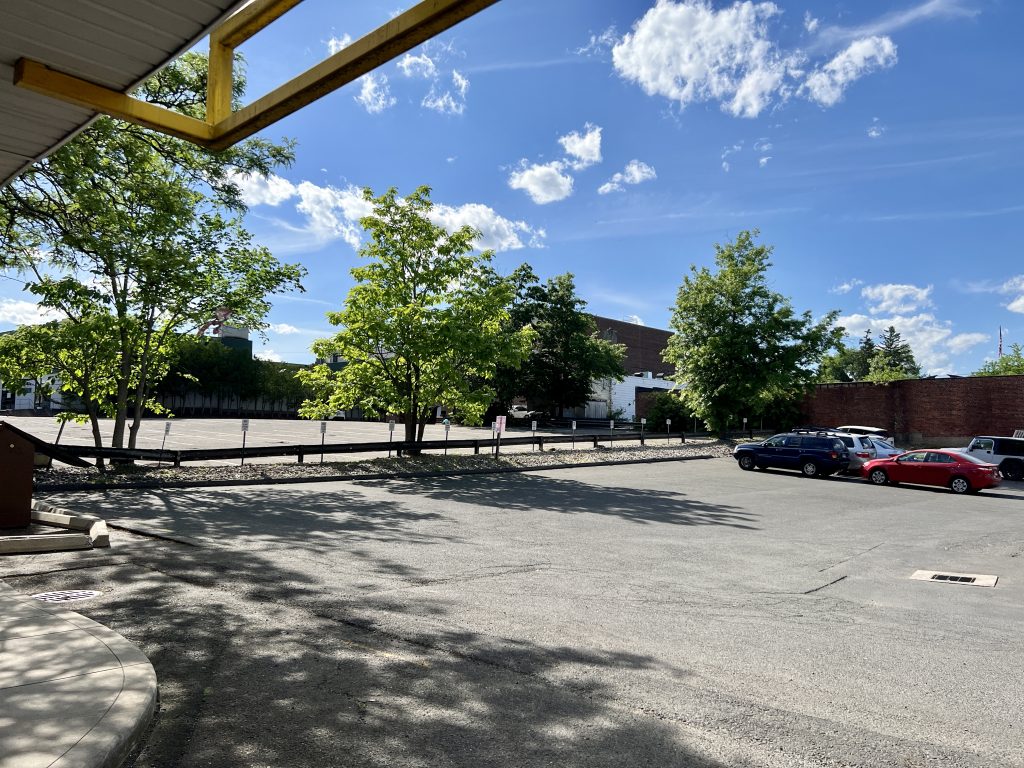 The project will be submitted as a Special Development District, and will be the first to utilize the incentive zoning ordinance adopted by the Town Council in 2017.

“The significant level of investment being proposed with this project is welcomed,” said Kristen Gorski, West Hartford’s economic development coordinator. “It will help to support the continued vibrancy of our center.” 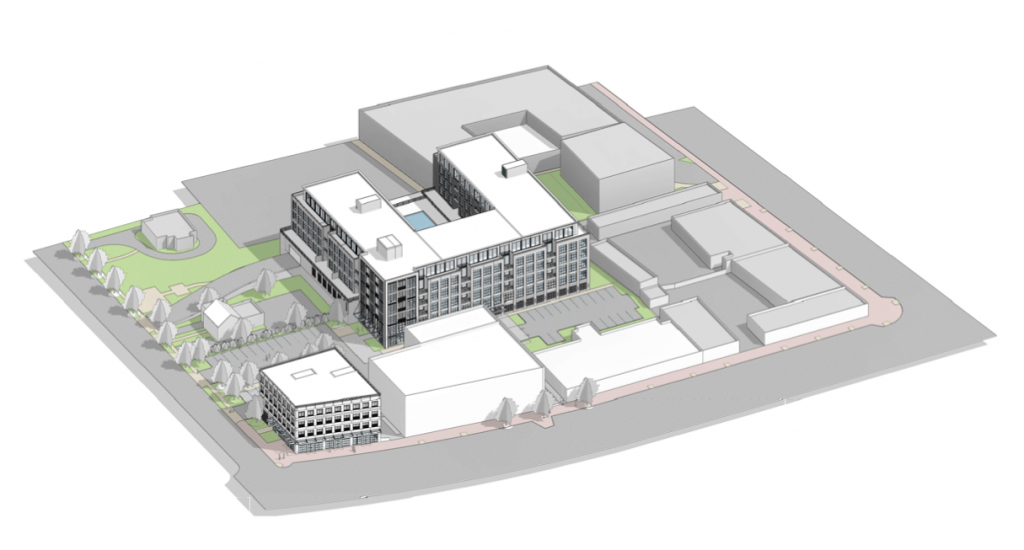 The development will be proposed in place of roughly 200 existing surface parking spaces but will replace all of them and add as many as 100 additional spaces to the Center.

New spaces would be in the two levels of garage parking in Center Park Place – one of which is below grade and the other which is fully screened – and will be for the residents of the 64 condominiums at Center Park Place and the 18-20 apartments at 75 LaSalle, tenants that currently use the surface lots, and the general public.

A drive-through, as well as surface parking for Webster Bank customers, will remain according to the plans. Lexham purchased 8 Arapahoe in 2017, and that property will be incorporated in the parking area.

Vehicle access, as shown in the schematic below, would be from Arapahoe. 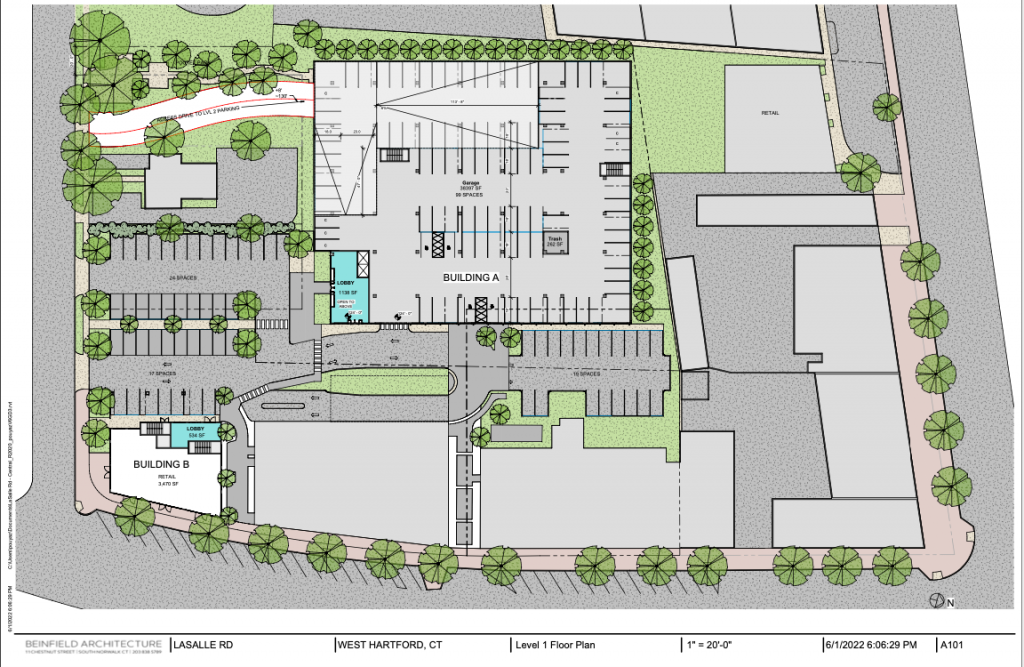 Lewis said the four stories of condominium units will be a mix of one- and two-bedroom units, as well as larger units that include a den that could also be a third bedroom. The project will include green space a pool, roof-top deck, and other amenities.

The condominium building will be type 1 high-end poured concrete construction. Both buildings will have high ceilings and modern appliances and finishes.

The apartments will also be of various sizes, and four will be deed-restricted as workforce housing, available to individuals with incomes at or below 80% of the area mean income (AMI). The four-story 75 LaSalle will include three floors of residential occupancy, with the ground floor reserved as commercial space.

Price points for the condominiums and rental rates have not yet been set, and will in part be dependent on the ultimate costs of construction. The proposal will be to construct the development in phases.

The overall investment is expected to exceed $50 million, Lewis said, and could be much more. The presence of additional residents in the Center will also be of great benefit to area businesses, he said.

“An independent study on the economic impact of the project is currently being conducted,” Lewis said. “The project will have an extraordinary and significant economic benefit to the existing merchants and businesses in the Center as well as a substantial positive impact on the town’s tax base, which helps every West Hartford taxpayer.”

Lewis’ Arapahoe Group LLC and his team, which includes partners Manafort WHC, LLC and West Hartford Arapahoe, LLC (the Simons family, which owns the Town Center Building, residential buildings in Bishops Corner, and other West Hartford properties), as well as Beinfield Architecture of South Norwalk, have had four informal meetings with the town’s Design Review Advisory Committee (DRAC) since January 2022. They have submitted multiple renderings and analyses, obtaining DRAC’s input and refining a plan that Lewis has envisioned for more than six years, and have been working within the parameters of an incentive zoning ordinance that the Town Council passed in 2017.

In 2016, Lewis was looking to submit a project proposal that would have required a “floor area ratio” (FAR) – the ratio of a building’s size to the size of the piece of land it’s on – greater than the current limit of 1.25, but according to the preliminary plans, and taking into account the incentives, this proposal would come in with a FAR of 1.243.

The incentives, which can be combined in a proposed project, include:

Lewis, also the managing principal of Lexham Private Investors LLC, is already an owner of a significant number of commercial properties in town, and owns all of the property where he will propose to build Center Park Place and 75 LaSalle. His other investments include 65 LaSalle Rd. (Webster Bank, Becker’s Jewelers); 25-55 LaSalle (Union Kitchen, Wurst Haus, Ávert, Central Optica); the Central Building, 1001 Farmington Ave., 1253 New Britain Ave. (DORO Marketplace), and other buildings on Farmington Avenue, North Main Street, and South Main Street. 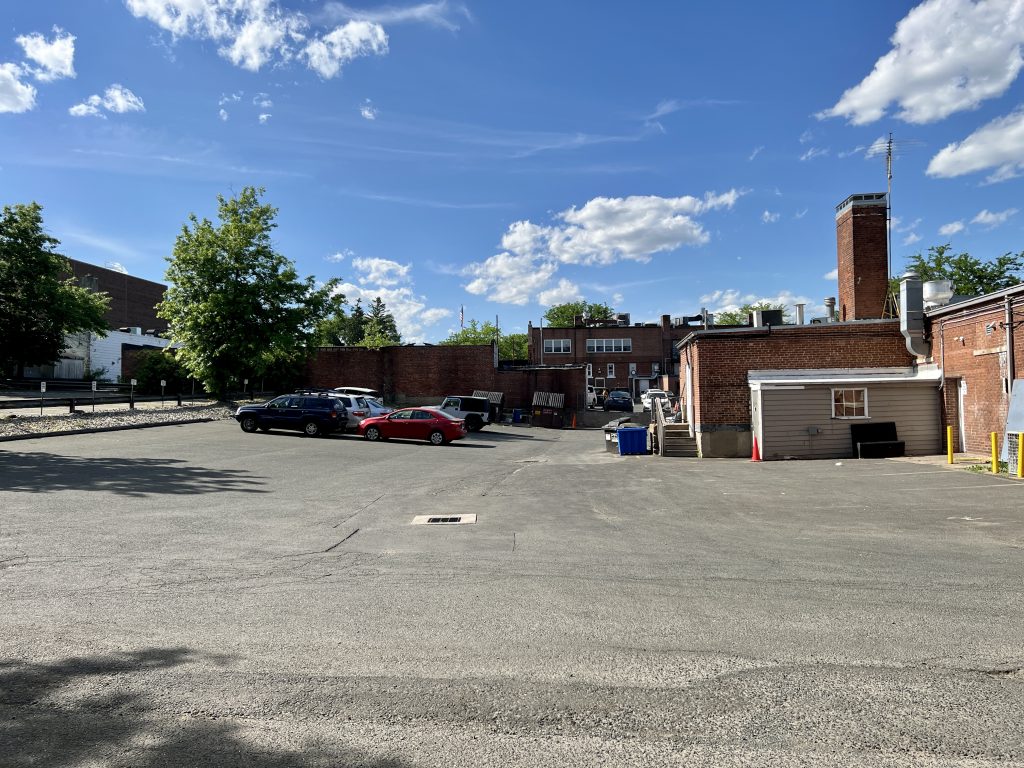 Existing parking behind Union Kitchen and Wurst Haus would be incorporated into Center Park Place under a proposal to be submitted to the Town Council. Photo credit: Ronni Newton