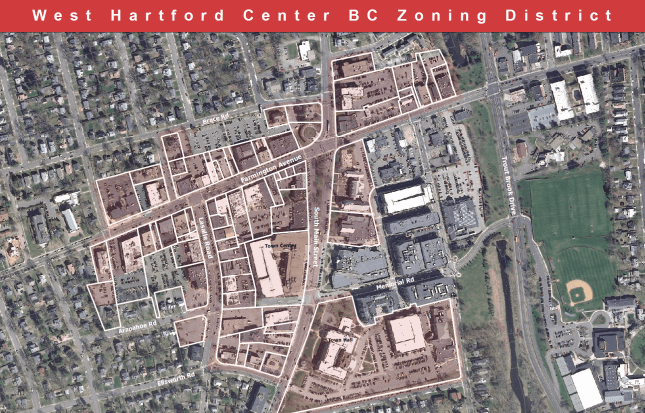 The Town of West Hartford made several zoning changes Tuesday night, passing two new ordinances and modifying another in an effort to modernize regulations and spur appropriate development.

Several zoning changes were approved unanimously by the West Hartford Town Council Tuesday night, giving property owners a method of using incentives to develop projects with greater density in the Central Business District (BC zone) and allowing “experiential” recreation and restaurant facilities to operate in certain parts of town.

“We’ve been grappling with the issue of density for a couple of years now,” Community Development Director Mark McGovern told the Town Council at the public hearing that preceded Tuesday night’s meeting and vote.

Two zoning ordinance changes that the Town Council considered in 2016 had failed to pass, McGovern said. Both had to do with density and requested an increase from the current 1.25  maximum allowed floor area ratio (FAR) as part of a special development district application.

After months of working group meetings, public outreach and surveys to gather feedback, the Town Planning and Zoning Department presented its findings regarding public opinion of future development in the Center to the community planning committee in May. In June, the Town Council formally adopted a Vision Statement and Guiding Principles for the Central Business Zoning District intended to be used when evaluating future development in the BC zone.

The next task was crafting an ordinance to spur additional development in the Center that would be consistent with the the vision and guiding principles, McGovern said.

The incentive zoning ordinance proposal that ultimately was brought to the Town Council, which provides an opportunity for increased density if certain amenities are incorporated into a project, “is consistent with those guidelines and consistent with feedback” that was received. It does not eliminate the 1.25 FAR as a base, nor does it allow for buildings taller than four stories.

Any proposed development under this ordinance must be submitted as a Special Development District, and Corporation Counsel Pat Alair noted that the terms of approval are not “as of right.” The application process will likely be lengthy, and include review by Town Planning and Zoning Commission (TPZ), Design Review and Advisory Committee (DRAC), formal staff review, and a Town Council public hearing before being considered for a vote.

In addition, before even being considered under the incentive zoning ordinance, proposed developments must also meet certain “findings,” Alair said. They must be contextually appropriate scale, have adequate parking, be in harmony with the open feeling and natural light of the district, allow for adequate street capacity, and provide appropriate bicycle and pedestrian amenities.

The incentives, which can be combined in a proposed project, include:

A half-dozen residents spoke at the public hearing, with some expressing concerns that additional development would exacerbate traffic and parking problems.

David Meehan, a Woodrow Street resident, was part of the working group and said the experience provided for good dialogue and collaboration. “The vision statement that came out from it … I think really hit it perfectly. I’m pretty proud. It really encompasses the feedback that was part of this process.”

While he agrees that the town needs to grow its Grand List, Meehan said he was concerned about the possible stacking of incentives, as well as the “unintended consequences” of additional development.

What the Center really needs is “feet on the street,” said Anna Boelitz, who lives on Arapahoe Road, but she expressed concern that the Center is already dense. “We want light, we want air, we want the atmosphere that we have to continue,” she said.

Mountain Road resident Chris Vargas said that adding residents will result in more residents who can walk or bicycle to patronize the businesses in the Center. “Increasing the density in the Center is important and we want to get there,” he said. While the ordinance may not be the best, it’s a good first step, he said.

“Growing our grand list is an important issue for us but we are not just seeking any development,” Town Manager Matt Hart told the Town Council.

West Hartford is largely built out and although we want to grow, it needs to be in a way that’s compatible with the community. “The Center presents another area of possibility. Many of those buildings are older, some are historic, and there are real challenges to development,” but incentive zoning, with the high level of discretion and control afforded to the Town Council, will allow redevelopment in a way that’s consistent with the community,” said Hart.

Ben Wenograd, who chairs the Town Council’s Community Planning and Physical Services Committee, said this topic has been discussed in committee for a long time, and is a modern ordinance that provides flexibility and is worth passing.

The fears of stacking incentives are misplaced, Wenograd said, because “none of us are going to make this into something dreadful.” Although the economics of it may not work in the Center, he said he also appreciated the affordable housing incentive, which may be something to consider in other parts of town.

“I trust the staff with their vision that this is going to be a model to pursue,” Council member Chris Williams said in voicing his approval for the ordinance.

“We talk a lot about smart growth, smart economic development,” Councilor Dallas Dodge said, and this does that, adding that he appreciates the Council’s control and that the ordinance is not “as of right.”

Council member Chris Barnes praised the the process of developing the ordinance.

“This is an example of the Council giving full consideration to the concerns of public residents.” he said. The ordinance brought to the Council will allow them to weigh different considerations of proposed projects and determine what to approve in conjunction with the criteria that need to be met.

Minority Leader Denise Hall said that issues about late night activities, expressed as concerns by some residents, really don’t have anything to do with a business proposal to increase FAR. Land in the Center is a scarce commodity, she said.  “We have to find ways to increase our grand list. I think we’re beyond calling this an affordable town.”

Hall noted that she particularly liked the infill incentive, and said the ordinance will provide a way to revitalize a lot of the buildings in the Center.

Deputy Mayor Leon Davidoff said he was initially reluctant to support the ordinance because he did not want to negatively impact quality of life issues for people who live close to the Center. But the end result, following input from the working group’s vision statement and guiding principles, resulted in an ordinance that took into account those concerns.

The ordinance is not perfect, Davidoff said, “but it is a step in the right direction” and he anticipates projects applications will be submitted in the near future.

Mayor Shari Cantor said she was sorry that Town Planner Todd Dumais was not able to attend the meeting because his hard work was critical to the ultimate drafting of the ordinance.

“All of us have a pretty good understanding of what we want to protect in the Center,” Cantor said. With the discretion allowed through incentive zoning, “we actually have more control than an ordinance that would have just increased the FAR,” while supporting retail establishments and maximizing benefit for the community.

The ordinance will open the door and spur appropriate development, Cantor said. “This is one of the ways to protect our precious Center.”

Also unanimously approved Tuesday night was an “experiential zoning” ordinance, a modernization of West Hartford’s regulations that will permit restaurant and recreational activities in certain zones to operate out of the same space.

Before voting and citing concerns from neighbors, the Town Council amended the proposed ordinance so it would apply only in zones CDBG and IG – Blue Back Square and the industrial zone in the New Park Avenue corridor and other parts of the southeast area of town. Originally the ordinance would have also applied to zone BG – Bishops Corner, parts of Park Road, and Corbin’s Corner.

Deputy Corporation Counsel Kimberly Boneham outlined the terms of the ordinance: a special use permit will be required, in order for alcohol to be served the space must be at least 5,000 square feet and also serve hot food, there cannot be any age restrictions, the business must close at midnight, and dance halls or dance clubs are specifically excluded. DJ entertainment will not be permitted.

Two people spoke at the public hearing that preceded the vote.

Attorney Elliot Pollack spoke on behalf of a West Hartford resident, noting that there are plenty of experiential businesses in other nearby towns. “Why is it necessary for the Town of West Hartford to replicate those uses here?” he asked.

Jim Chapdelaine, a local musician, praised the proposal as a way to augment the arts. “I strongly encourage you to really consider your relationship with music in this town,” he said. “West Hartford needs music as well as good restaurants.”

Wenograd said the experiential zoning ordinance is a way to help the town’s commercial establishments. “We can’t stay steady … this is a newer trend and we don’t want our zoning rules to be stuck in the past.”

Barnes said he was “excited about the options and the opportunity.”

Davidoff said West Hartford is not treading on unfamiliar territory and this type of business is permitted in communities throughout the country. “It’s really good that we’re joining this bandwagon, really good that our [Community Planning and Physical Services] committee worked really diligently to get us to this point.” It provides economic value as well as a social component, and signals that we want property owners to succeed in West Hartford, he said.

Cantor said that it was a lot of work to determine the “right mix and right limits” of the ordinance. “This is something that I think is going to put us in a different place,” she said, opening spaces and adding to the vibrancy of the town.