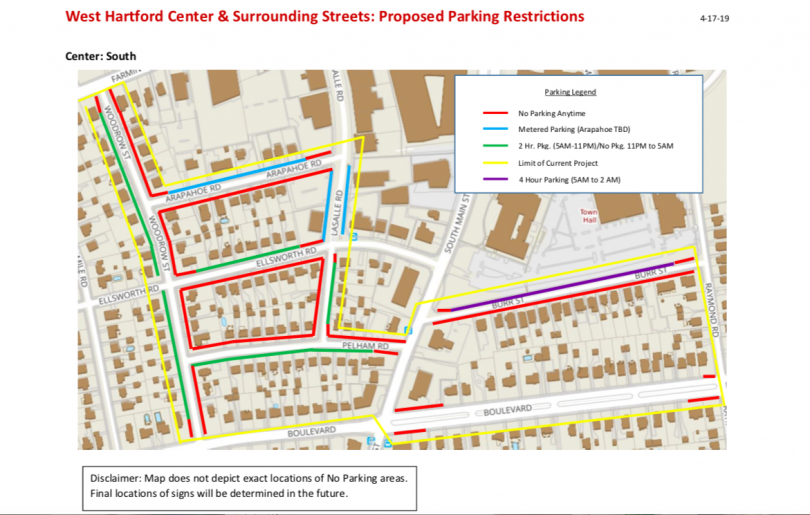 The Town Council approved a plan to restrict parking on portions of streets west of West Hartford Center. 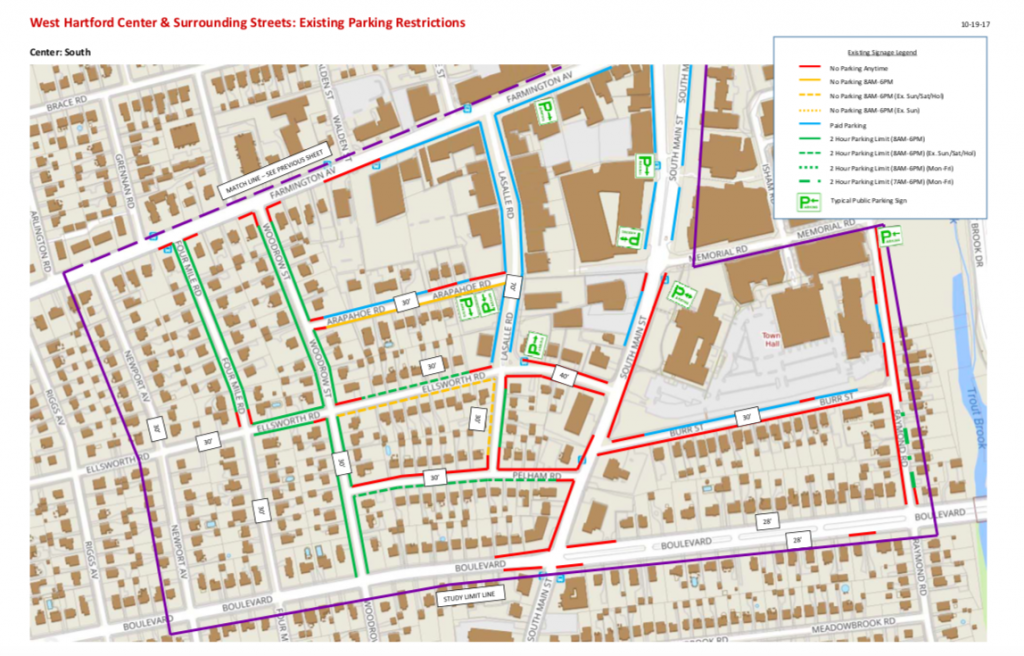 The Town Council held a public hearing and then voted unanimously Monday night on an ordinance restricting parking on certain streets in the southwestern part of West Hartford Center – an effort to address residents’ concerns about noise and other activities associated with late-night parking in neighborhoods.

Parking will be prohibited at all times on one side of streets designated by Town Manager Matt Hart, who serves as the town’s “legal parking authority,” and certain designated streets will now have overnight parking prohibited for a longer period of time – expanded from the current 2-5 a.m. to between the hours of 11 p.m. and 5 a.m. – unless an omit has been obtained from the West Hartford Police Department.

The proposed ordinance initially included a clause that would codify the omit process, but after concerns raised by several Council members and lengthy discussion, the Council amended it to remove that clause and will address it separately at a later date. In the interim, the omit process will continue to operate without change.

The streets impacted by Monday’s vote, as shown on the map at the top, are west of South Main Street and south of Farmington Avenue, and include Woodrow, Arapahoe, Ellsworth, and Pelham. Signage will be installed in the next 45-60 days, indicating the new parking regulations.

Director of Community Development Mark McGovern told We-Ha.com previously that this initiative stemmed from a discussions with residents of the area southwest of the Center following the Council’s discussion in the fall of 2016 of a “Resolution Concerning Zoning in the Central Business Zone.”

At Monday night’s public hearing, McGovern said that while two proposed ordinances amending density were withdrawn in 2016, town staff began a dialogue with the neighborhood regarding ways to manage traffic and on-street and late-night parking. An incentive zoning ordinance ultimately passed in 2017, and the dialogue with a working group of residents and town staff continued.

After “a lot of compromise about what would work for them,” McGovern said, the ordinance considered by the Council Monday was drafted and discussed by the Community Planning and Physical Services and Public Safety committees.

Following zoning discussions, town staff continued to work with a committee of about eight residents who were concerned about late night issues in their neighborhoods west of the Center, including “noise, crowded streets, reduction of site lines, and sometimes property damage,” McGovern said.

The resolution considered by the Council Monday was the outcome of those discussions, and included input from residents as well as the West Hartford Police Department. According to McGovern, the plan has been looked at holistically, so that if parking is restricted on one road it would be available on an adjoining block.

Parking counts were conducted, McGovern said, and there are vacant spaces available in the Arapahoe, Brace Road, and Farmington Avenue lots after 10 p.m., which should be able to accommodate those who would otherwise park on neighborhood streets late at night, when it creates the most concern for residents.

“In general there is a good consensus that this is a good step to take,” McGovern previously told We-Ha.com. In addition to the parking restrictions, McGovern said that there have been improvements made to sight lines by the removal of vegetation and marking of certain areas to eliminate parking, for example at the intersection of Woodrow and Farmington Avenue.

“We relied on the working group to talk to neighbors and get feedback,” McGovern said. That was part of the consensus building, he said.

“Our feeling is this is a good first step addressing the issues brought to the town by this neighborhood,” McGovern said at Monday night’s public hearing. He added that the restrictions are being looked at as a “pilot,” with the understanding that the town manager would be able to tweak things if needed.

A similar plan might be considered for other neighborhoods surrounding the Center, like the area north of Brace Road, he said.

“We admit that this is a unique approach to what we see as a unique challenge,” McGovern said. There were no other examples of a comparable community in the state facing the same issues as in West Hartford.

Town staff was tasked with working with residents to develop a plan to address concerns, and while West Hartford Center business owners were not part of the committee, Economic Development Specialist Kristen Gorski did go door-to-door to speak to shop and restaurant owners and managers who had mixed reactions to the proposal.

There were previously 21 businesses signed up for employee parking at the Town Center Garage, and Gorski said that three more signed up after her outreach. The program provides them with a stamp that allows employees discounted rates to park at the garage, which is accessible from South Main Street. There are also 30-40 individuals who have purchased monthly parking in the Town Center Garage through a program established by the Community Development Department.

The town uses the parking money to maintain the Center, for daily cleaning, snow removal, and other maintenance.

Christine Fichera, who lives on Arapahoe, said there are “many wonderful things about the neighborhood I live in … we all love being able to walk to pretty much anywhere we need to go” while being part of a tight-knit community. However, she said residents also must deal with cars parked bumper-to-bumper and crashes, and she has seen drunk drivers who “vomit on the sidewalks, and on two other occasions I witnessed lewd acts in parked cars.”

Fichera said she is pleased that the town worked to find solutions. “I support the recommendations that came out of the Center parking committee,” she said, and they will not result in a shortage of parking but rather will “help our neighborhoods be a saner, safer place to live,” and will send more revenue to the town.

Rebecca London, a Four Mile Road resident, said that although parking restrictions on her street will not change, “I was very much happy to be a part of this process, and I support it. While I do have some concerns, I am very happy to support this knowing that it sets a precedent that the citizens of the neighborhood that borders the Center are listened to.

“There is no way to meet 100 percent of everyone’s needs,” London said. “It’s not the employees – it’s the patrons walking by and behaving badly. If they can pay a $200 bar bill at Barcelona they can pay $5 for parking,” she said.

Woodrow resident David Meehan said this is just a first step, and one the town can learn from. He said that 11 p.m. was determined to be the “restaurant/bar break point,” and is glad that there is capacity in safe and well-lit locations to handle late night parking.

Council member Liam Sweeney expressed concern that 11 p.m. seemed an arbitrary time to begin the overnight parking ban, and Hart said that while it wasn’t scientific, it seemed to be the time that the restaurant crowd converted to the late night crowd.

Sweeney also raised concerns with the wording for codifying the omit process, but after that clause was removed, he joined fellow Council members in supporting the ordinance.

Councilor Chris Williams called the ordinance “a thoughtful approach to a difficult issue.”

Council member Mary Fay said she thinks West Hartford has a “good livable, breathable parking system. … It’s really a quality of life issue … need to have a balance between businesses and residents,” Fay said, adding that the ordinance can be amended if it doesn’t work.

The Town Council passed the incentive zoning with the neighborhood’s support, Council member Ben Wenograd said, and he thinks the approach is appropriate. There have not been any letters of opposition, he said.

This has been a “great collaborative process, and let’s hope it works,” said Wenograd.

This has been under discussion since 2016, Councilor Leon Davidoff said, “which illustrates how slow the wheels of government work,” but it does work to try to make solutions that make sense.

If the Center weren’t vibrant this would not be an issue, Davidoff said, but it’s important to protect the quality of life  from behavior that “puts a blemish” on the community. “If we’re not getting it right we’ll fix it again,” he said, and this process shows that the Council is listening to our residents.

“It’s a quality of life” issue, not a parking issue, said Deputy Mayor Beth Kerrigan. Residents should not have to live with front yards that are “like being in a college dorm.”

Cantor thanked everyone for their time and patience, and also noted that this is a quality of life, not a parking issue. It will be important to remain in tune with how this will impact our businesses, she said.

We want to treasure and preserve the Center, Cantor said, and residents “took a step back and allowed us to keep moving forward with our vision” when the incentive zoning ordinance was approved.

West Hartford “might be slow but we think it’s right,” she said, and a way to manage the success of the Center with the balance  of our whole community’s quality of life. 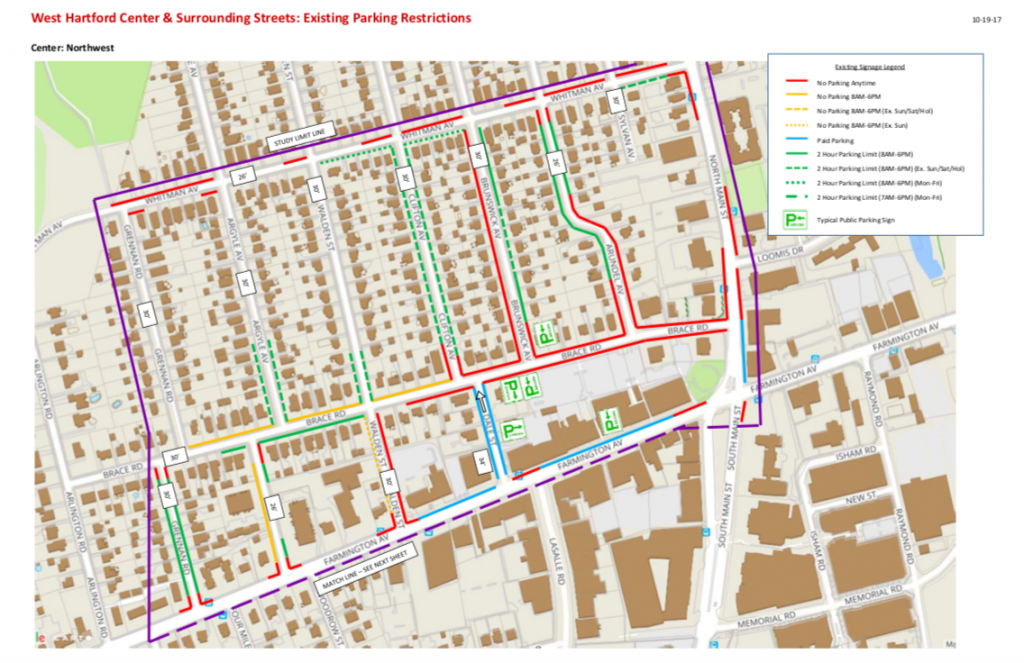 Existing parking restriction in the northwest area of the Center, which are not being changed by the ordinance passed Monday. Town of West Hartford