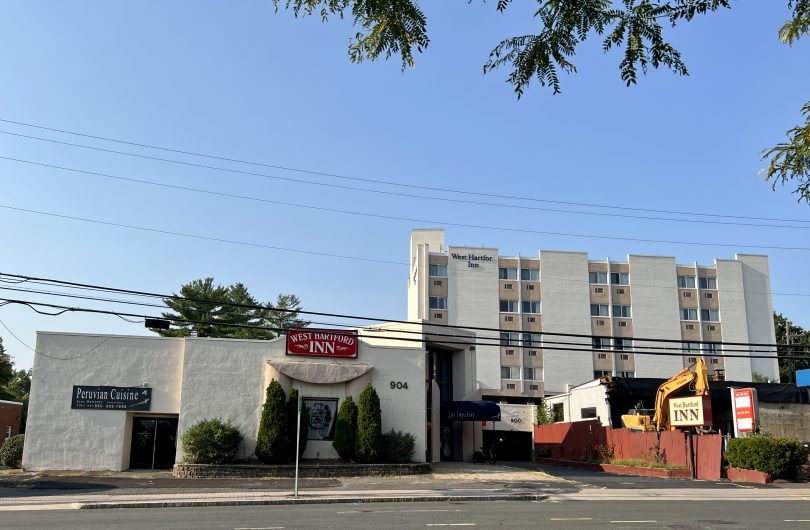 The Town of West Hartford plans to apply for a grant to remediate the property at 900 Farmington Avenue, which a developer would like to transform into affordable housing. [Updated, Sept. 13, 2022]

A developer has signed a purchase agreement for the property at 900-904 Farmington Ave., currently occupied by the West Hartford Inn and formerly also occupied by Los Imperios, with the hopes of transforming it into deed-restricted affordable housing units.

The West Hartford Town Council voted Tuesday night and unanimously approved a resolution to allow the town to participate in the Connecticut Department of Economic and Community Development’s the Municipal Brownfield Grant Program. If the project is accepted, the program will provide $998,000 to assist with the remediation and environmental rehabilitation of the site. The application for the grant is due on Sept. 23, 2022, and grants are expected to be awarded in December 2022.

“The Town of West Hartford is excited about the potential for having affordable housing so close to the Center and Blue Back Square, providing residents with access to a vibrant part of town and access to transportation,” Town Manager Rick Ledwith told We-Ha.com on Monday. “This would further enhance our economic development throughout town,” he added.

Ledwith told Council members on Tuesday night that Economic Development Coordinator Kristen Gorski has been working with the developer to complete the application before the deadline.

The existing structures on the 0.67-acre property were constructed in 1967, and include a five-story hotel building with 22,142 square feet above ground as well as a parking garage, and a 7,146 square foot restaurant building. Los Imperios, which was the scene of signifiant police activity and cited for multiple zoning and other infractions, lost its liquor license in late 2017 following a remonstrance hearing, and closed for good shortly thereafter. The space has remained vacant.

According to documents on the town’s website, the developer WHI Camelot LLC, would like to renovate the existing building and also construct an addition, for the creation of a total of 44 units of mixed-income housing, with a minimum of 80% of the. units as deed-restricted for varying income eligibility.

“This project is critical to supporting diversity of housing stock, specifically in an area of town that is experiencing significant increased market rate and luxury units through approved and proposed developments,” Ledwith wrote in in an introduction to the resolution for participation in the brownfield program that he submitted to the Town Council. He noted that not only does the property have access to the amenities throughout West Hartford Center and Blue Back Square, but it “is also located on a major bus line, and has access to the Trout Brook Trail that provides a direct connection to the CTfastrak Elmwood Station and the Hartford Rail Line less than two and a half miles away.”

The brownfield program allows municipalities, regional development authorities, or land banks – not businesses – to apply for grants that would assist with brownfield redevelopment projects that could then result in significant economic impact to the community. The town applied for a $953,646 grant last fall for property at 1051-1061 New Britain Ave., and learned in January that the grant had been awarded. Sami Abunasra, who purchased those parcels, totaling 2.97 acres, in 2020, plans to pursue construction of a $34 million mixed-use residential and commercial development where the Ashley HomeStore Outlet – and previously Puritan Furniture – was located. The Ashley HomeStore is now closed, but plans for the redevelopment have not yet been submitted to the Town Council.

According to the resolution the Town Council approved on Tuesday, in order for 900 Farmington Ave. project to proceed, the developer will also need to secure adequate financing from the State of Connecticut Department of Housing and the Connecticut Housing Finance Authority.

The principals of WHI Camelot LLC have not been disclosed.