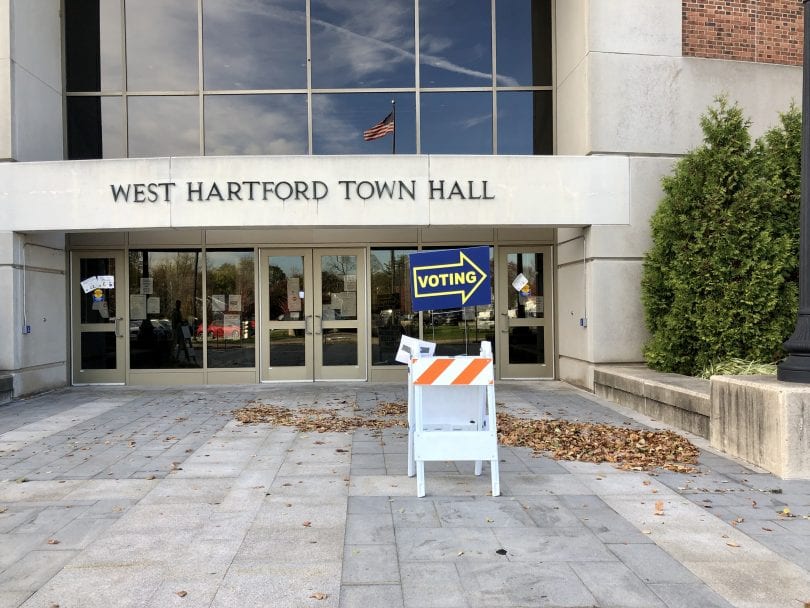 [Updated 6:50 p.m.] Early morning voters at West Hartford’s polling places were met with long lines on Election Day 2020, but by late morning the lines had subsided dramatically. This article will be updated throughout the day. 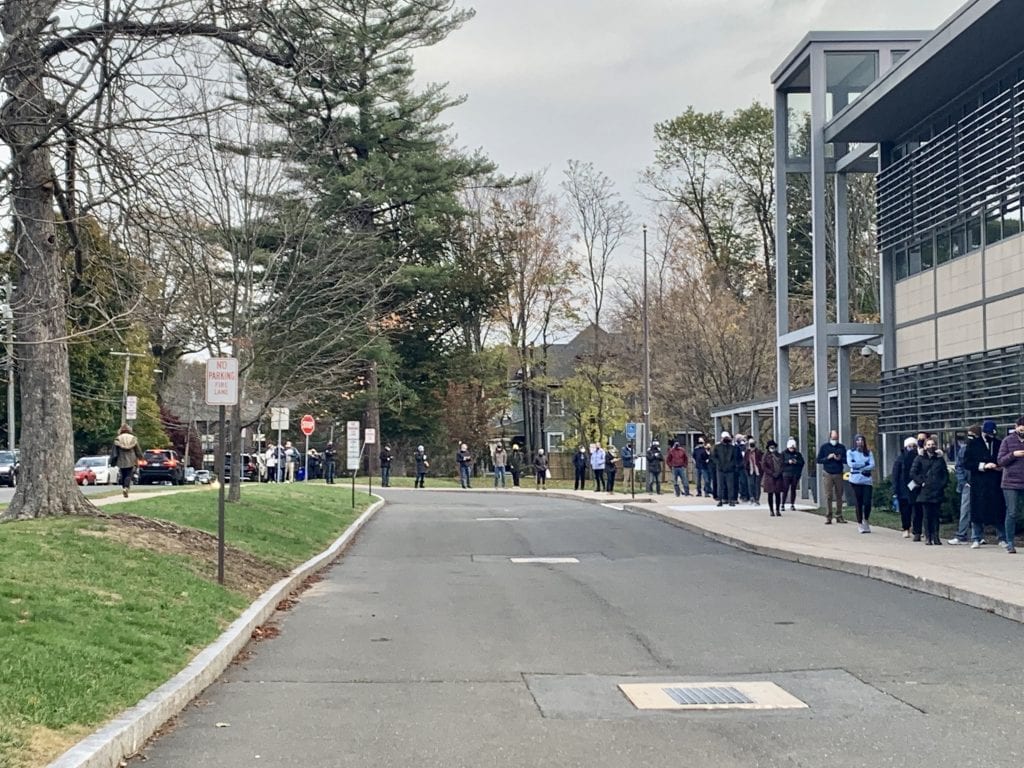 With two hours of voting time remaining, and the rest of the day’s absentee ballots left to be counted, West Hartford voter turnout had already exceeded 84%. 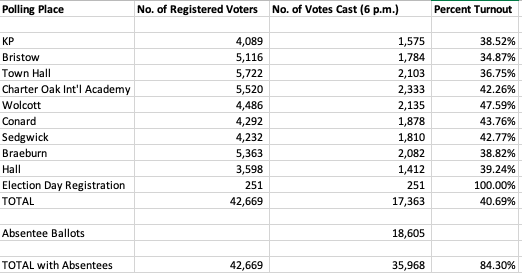 Even before the after-work rush, West Hartford voter turnout Tuesday was close to 80%.

Residents turned out in droves to vote in-person – many of them first thing in the morning, but also a steady stream throughout the day.

Charter Oak International Academy remained the busiest polling place, but the line was significantly faster than it had been in the morning. Braeburn Elementary School, also one of the town’s largest and traditionally busiest polling places, did not have any line during the afternoon hours.

By 4 p.m., nearly 36% of registered voters, 15,349 people, had cast their ballots at one of the town’s nine polling places. That figure includes the 251 residents who utilized the Election Day registration (EDR) system and then voted at the West Hartford Senior Center in Bishops Corner.

Town Clerk Essie Labrot said that 18,605 absentee ballots had been returned as of 2 p.m. – representing 93% of all absentee ballots requested. Additional pick-ups will be made from the drop boxes at Town Hall and the Faxon Library at 8 p.m. 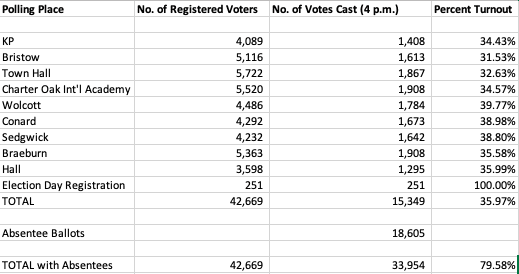 Republican Registrar of Voters Beth Kyle was thrilled with the turnout thus far, and said that while there had been lines in the morning, there have not been any problems reported at any of the town’s polling places.

“Everyone is abiding by social distancing and mask-wearing,” Kyle said. 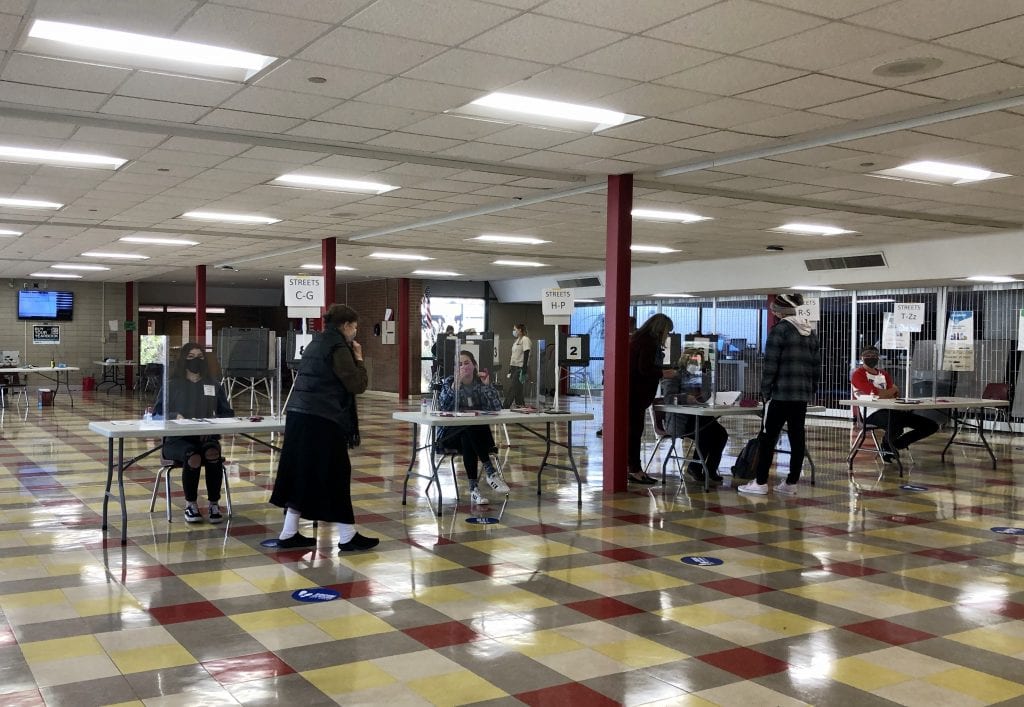 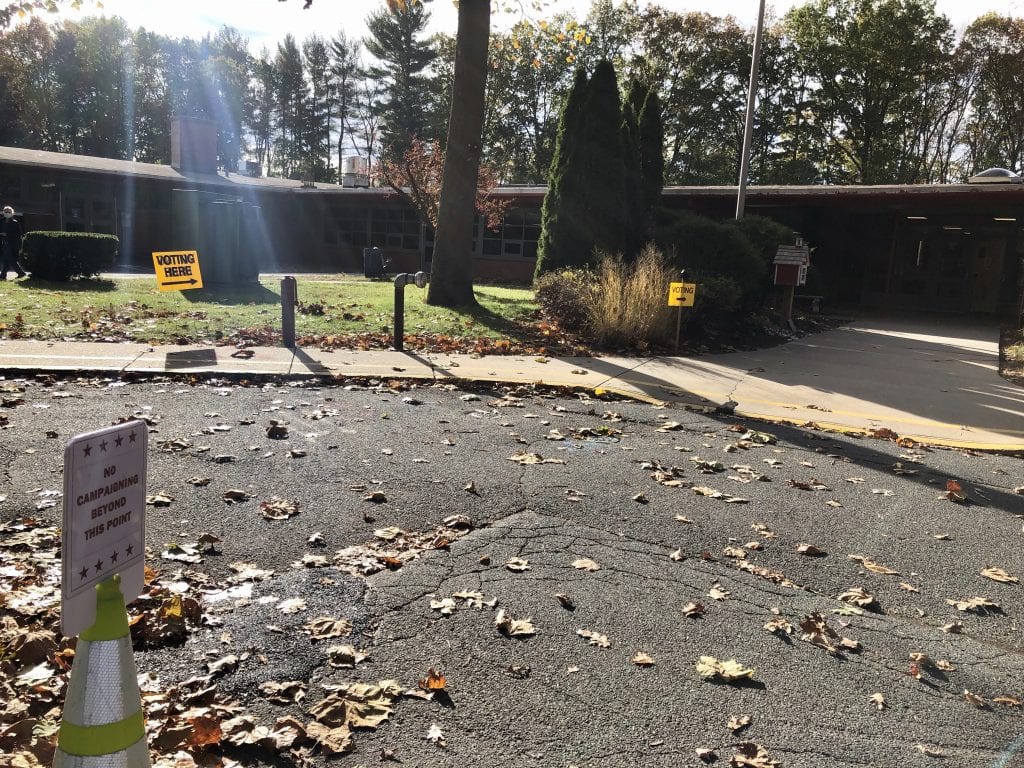 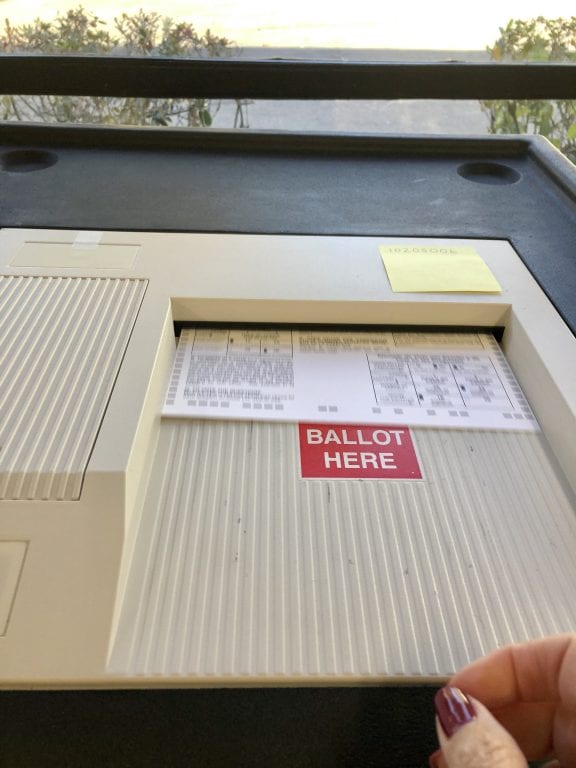 Such a great feeling to feed my ballot into the machine! Photo credit: Ronni Newton 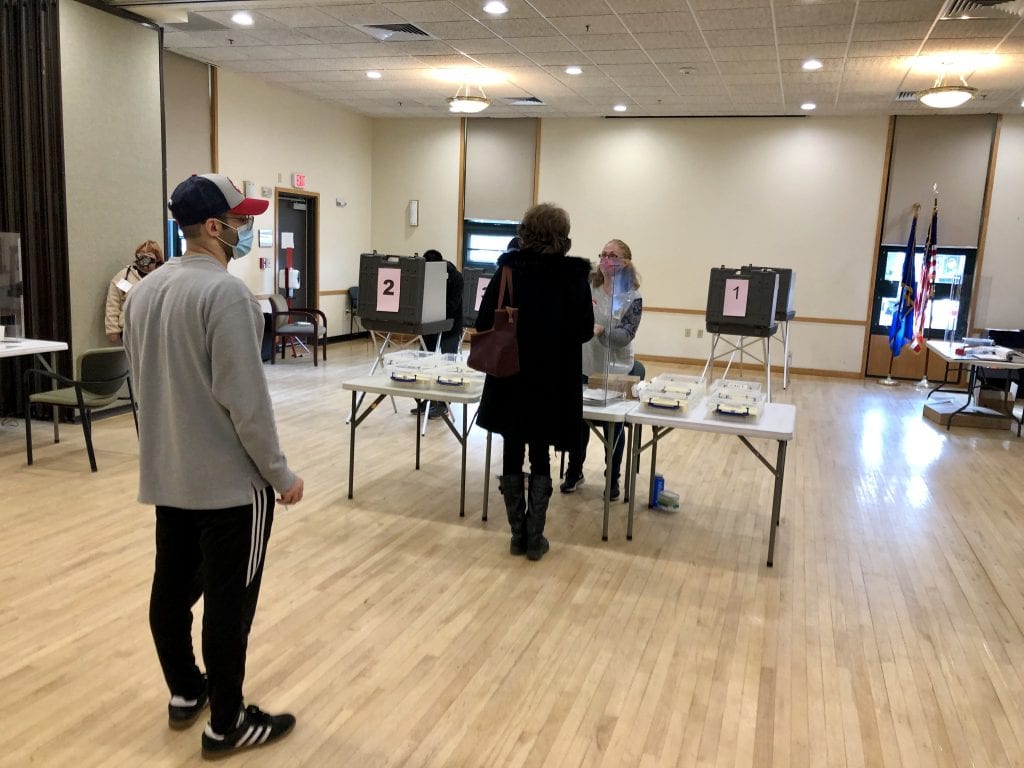 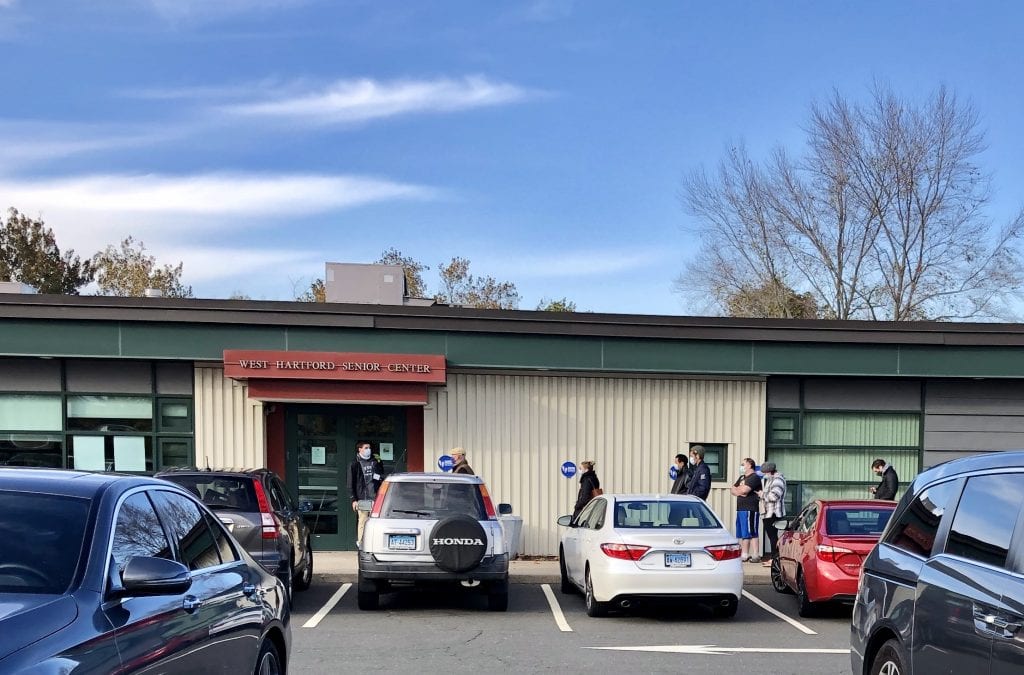 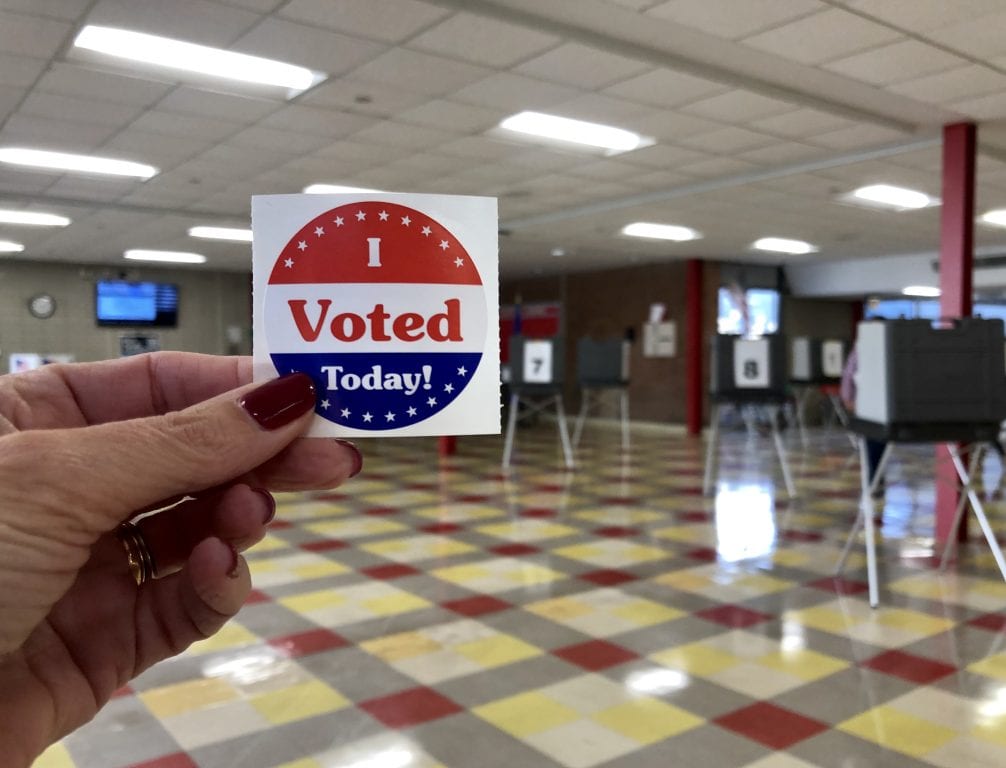 As the initial frenzy of early morning voting subsided, most of West Hartford’s polling places had short, if any, lines.

Charter Oak International Academy, which has more registered voters than any other polling place in town, had a wait of more than an hour first thing in the morning. By 10:45 a.m. there was still a wait of about 40 minutes. 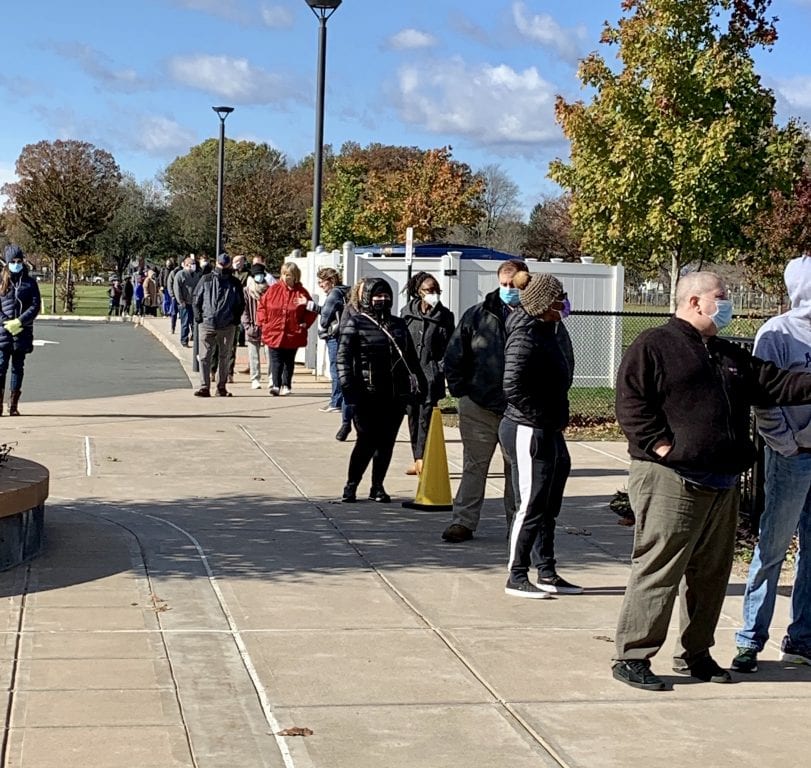 More than half of the expected number of votes in West Hartford were cast by absentee ballot in advance of Election Day.

By 10:30 a.m. information provided by Republican Registrar of Voters Beth Kyle indicated that another roughly 18% of all registered voters had voted in-person. 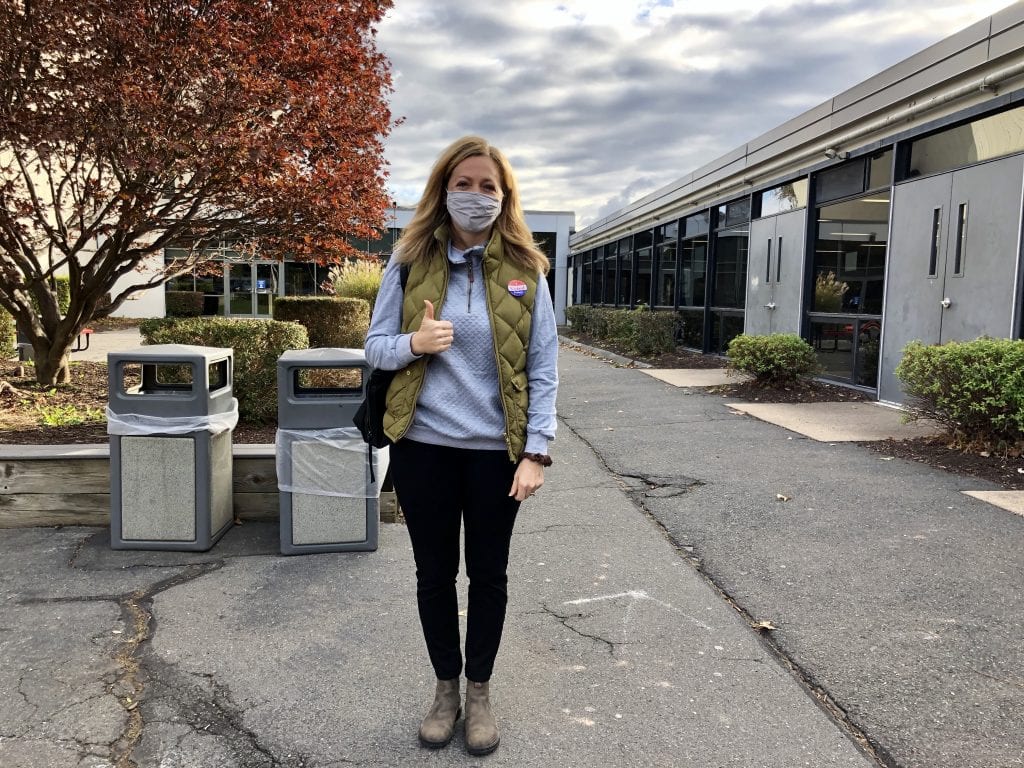 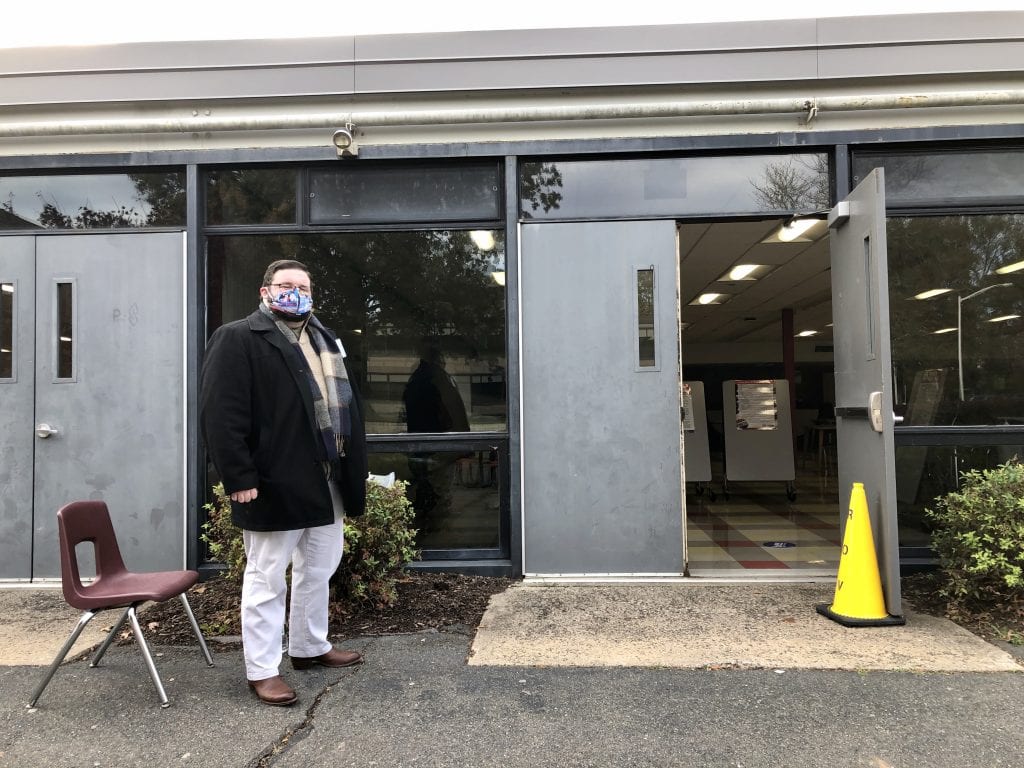 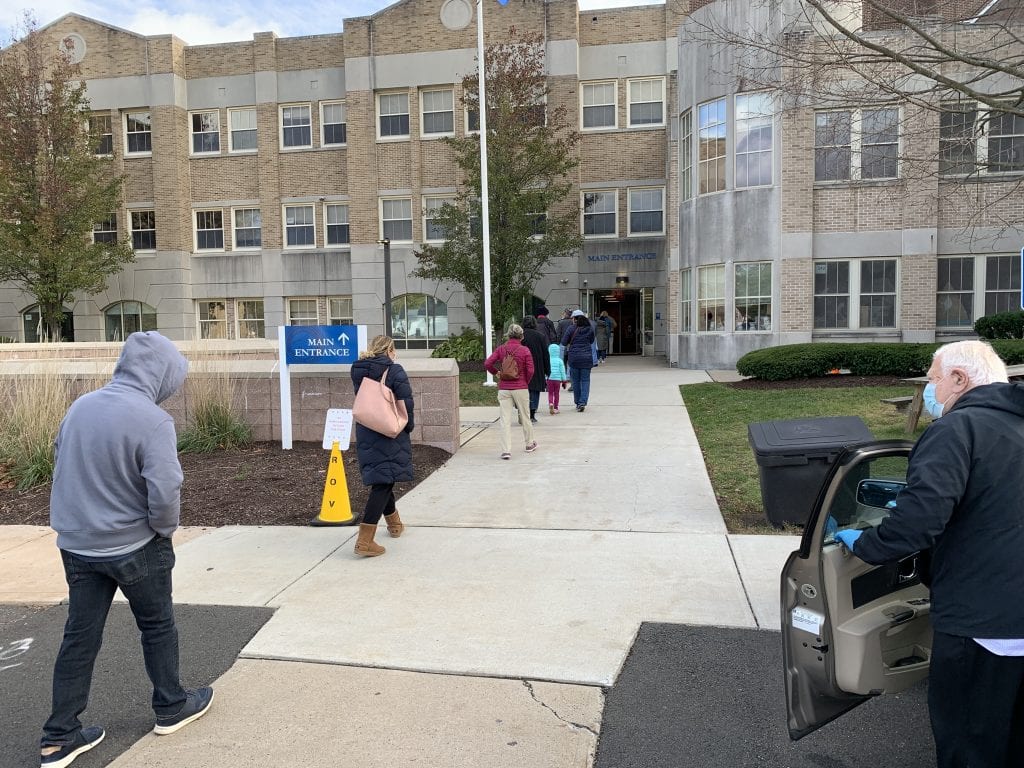 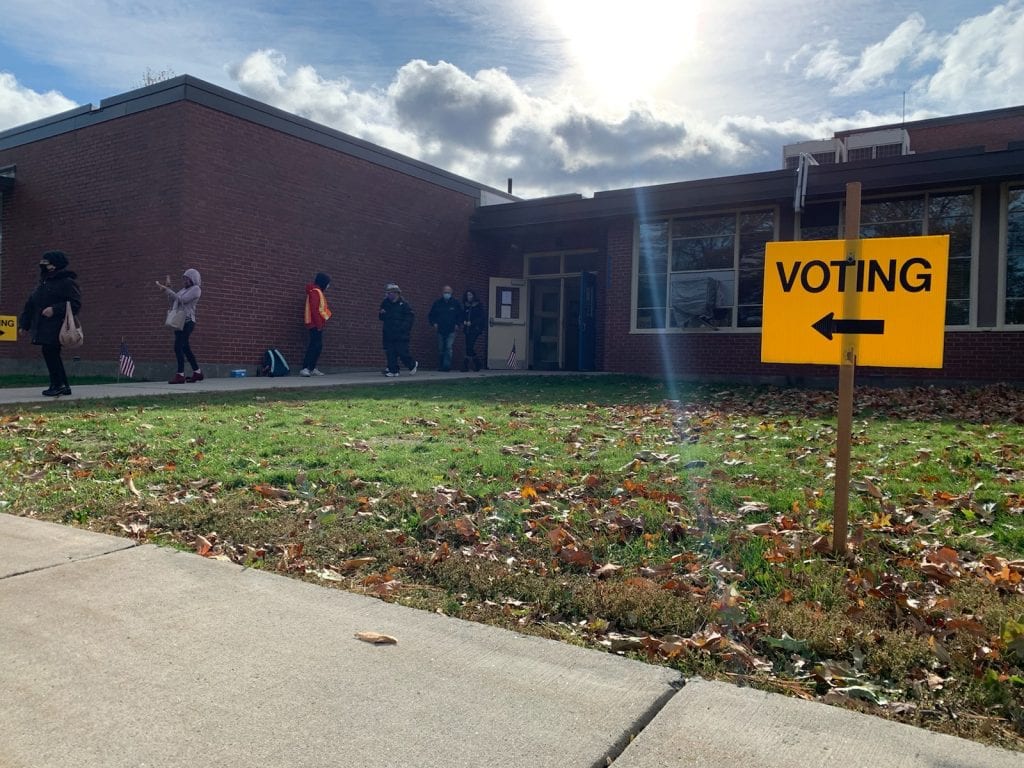 People started arriving as early as 5 a.m. to get a good place in line to vote in West Hartford, and while those residents expected to have to wait an hour until the 6 a.m. opening of the polls, the lines continued to build throughout the early morning.

At Charter Oak International Academy, resident Keith Griffin arrived at 6 a.m., and said there were at least 200 people already waiting in line. He cast his ballot and exited just after 7 a.m.

Lots of people showing up early to vote in #WestHartford. @indepthauto said about 200 people in line at Charter Oak when he arrived at 6am, and the line stretches almost all the way around the track. One group handing out snacks and hand warmers! #weha #ElectionDay pic.twitter.com/U9taz5AOyM 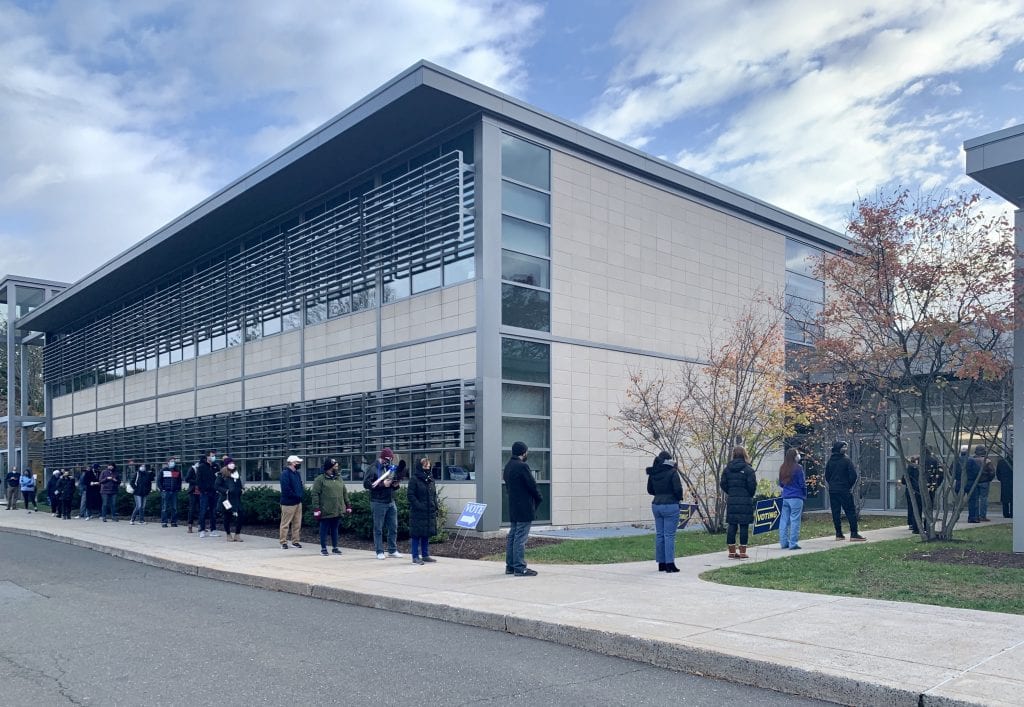 Republican Registrar of Voters Beth Kyle said the lines are not because there are too few people staffing the polls.

“[It’s] because of the safe polls plan that we were required to file with the Secretary of the State’s Office, and the plans for social distancing. We have a capacity limit on how many people we are allowed to have at the polls,” she said.

After each voter uses a booth to fill out their ballot, that booth has to be sanitized by the custodial staff. The solution needs to dry completely before the next voter can enter the booth because the ballot can’t be put down on a wet surface. Wet ballots will clog the tabulating machine, Kyle said.

Adding more booths won’t solve the problem because only a certain number of people are allowed inside at the same time.

“It’s really a function of COVID,” she said.

“Safety and integrity are the most important,” said Kyle. Election officials are making sure that voting proceeds in a reasonable, orderly, and safe manner, and won’t lead to a COVID surge.

Kyle said she is thrilled that so many residents are voting.

“This could be one of the best turnouts we have ever had,” said Kyle. “I’m very proud of the people of West Hartford for coming out and showing their support for the electoral process.”

Some of the longest lines in West Hartford were at Charter Oak, Bristow, Wolcott, and Town Hall. Anyone who votes at those locations who can wait until later in the morning may want to consider delaying.

This article will be updated throughout the day.