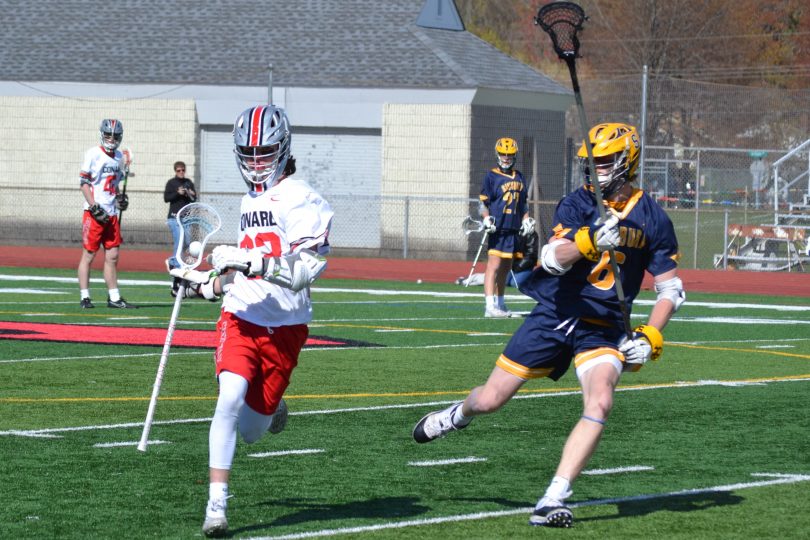 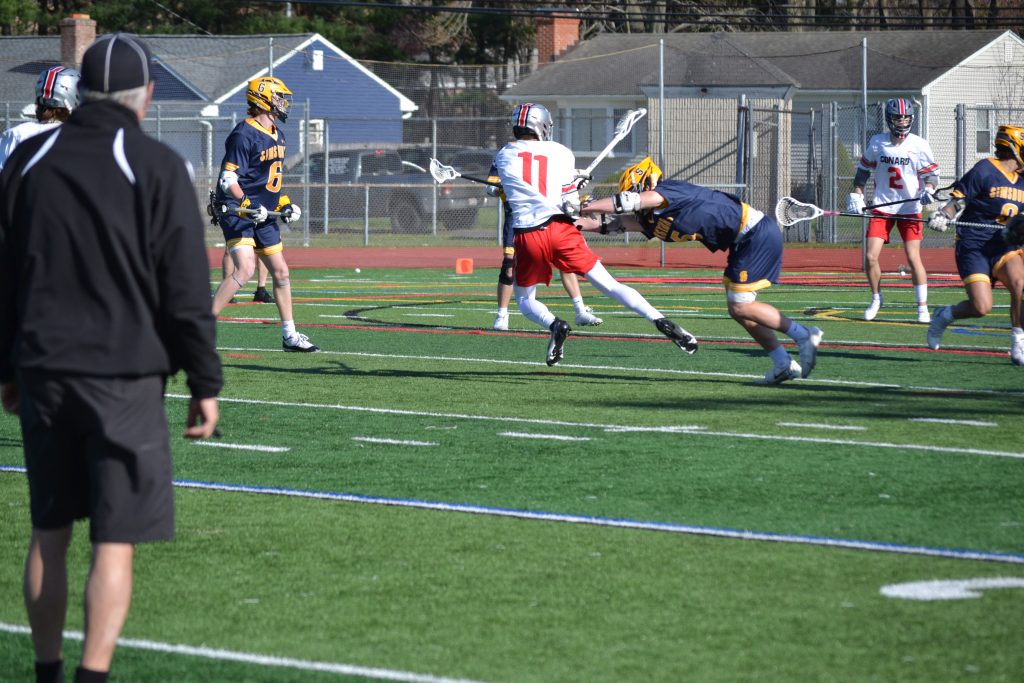 Will Tousignant takes the hit to get off the shot on goal. Conard vs. Simsbury boys lacrosse. April 28, 2022. Photo credit: Paul Palmer

It was not just a gusty wind that blew through McKee Stadium at Conard High School on Thursday. It was also an ill wind – this one supplied by the Simsbury lacrosse team – that saw the Chieftains drop a 13-6 decision.

The Trojans came out fast, and they came out strong in the opening 12 minutes. With the visitors having the better of possession, senior James Rogers got the scoring started when he came around the left side of the cage and bounced his shot past Conard goalie Trevor Dalton at 6:17. A minute later it was Reid Bulger beating his defenseman before his sidearm shot went in. 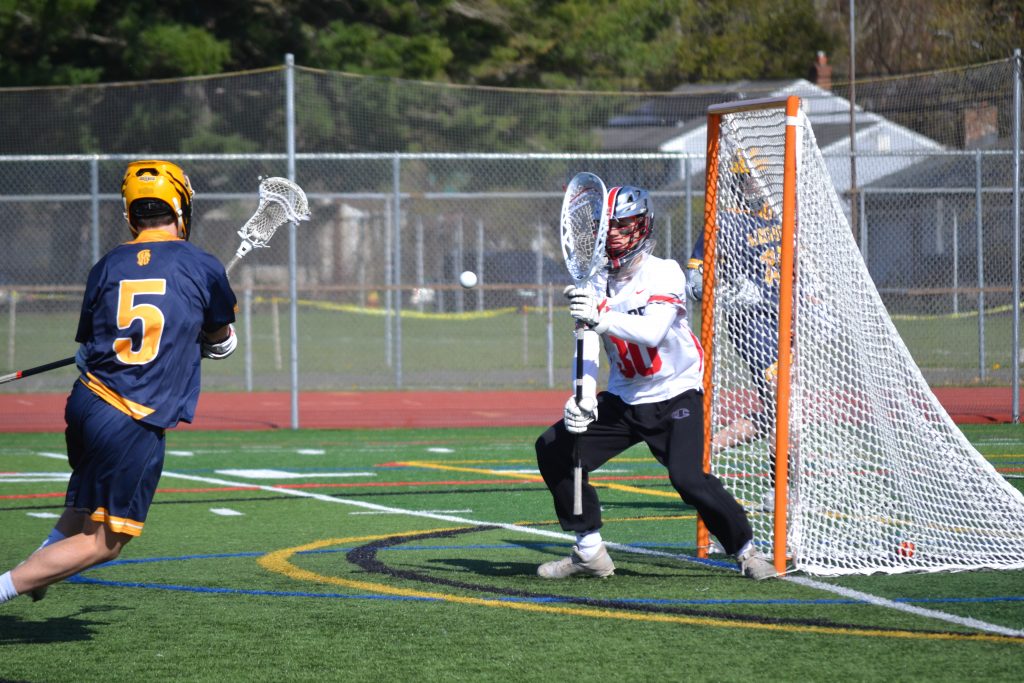 Bulger got his second of the game from nearly the same spot on the field two and a half minutes later. Simsbury would add one more before the first quarter was over for a 4-0 lead.

The Trojans (3-4) kept the pressure up as the second quarter began. After a strong save by Dalton, Simsbury worked the ball behind the net, then found the cutting player for the team’s fifth goal just 90 seconds into the second. As Conard struggled to mount any sustained pressure on the Simsbury goal, the visitors took advantage of their ball control and their ability to dig out loose balls to push the score to 8-0 with just 2:04 to play in the first half.

With time running out in the half, Conard finally got on the board when Will Keever found Will Tousignant with his pass, and  the senior captain beat Simsbury goalie Justin Loveland for the first Chieftain goal of the day. Overall, Simsbury had the better of things in the first 24 minutes – dominating in faceoffs, and loose balls and forcing Conard into 10 turnovers. 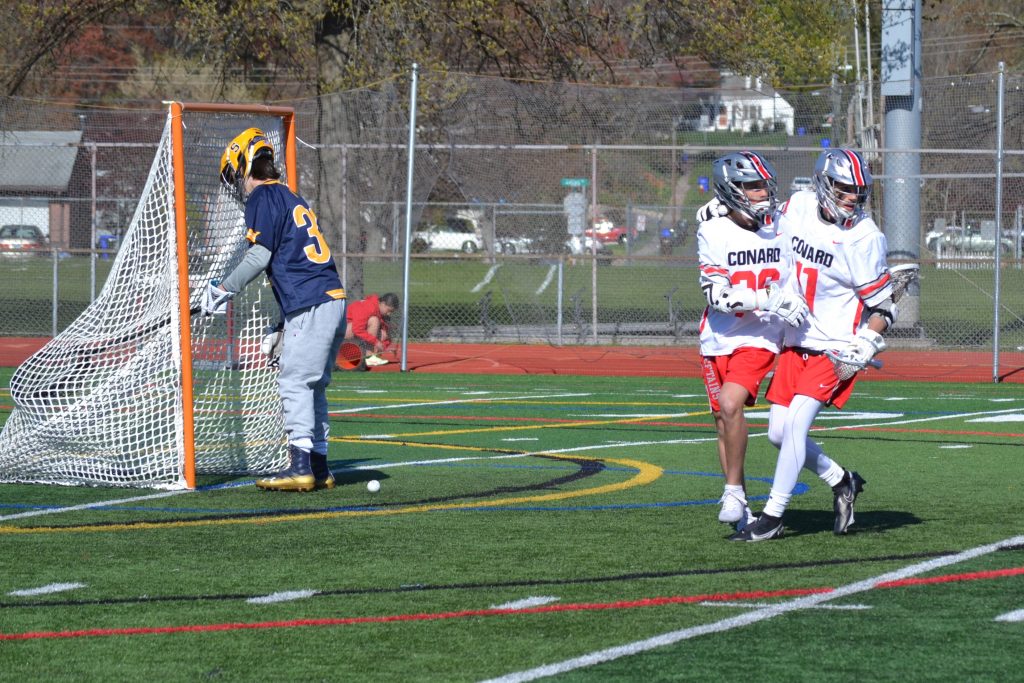 The late goal seemed to be a pick-up for the hosts, who came out of the break with a quick goal. Once again it was Tousignant scoring for Conard. But Simsbury responded with another long possession – this one nearly three minutes – before scoring again.

Both Dalton and Loveland came up with some big saves for their teams as the play opened up as the third period wound down. Dalton’s best came when he stopped Zach Truting from in close and covered the ball for possession. But the Trojans were  not done scoring yet, as Bulger out-muscled his defender and fired a rocket to the upper left side of the goal to make it 10-2.

Twenty-one seconds later, it was Simsbury scoring again capitalizing on a turnover by Conard’s defense in its own zone.

Just over two minutes into the final quarter, Conard went down a man on a foul and 40 seconds in, Simsbury scored to make it 11-2.

Conard (5-4) got its third goal of the game when Tousignant scored just 40 seconds after the Sims bury score. Tousignant nearly got his fourth goal at the 7:15 mark, but Loveland was equal to the hard shot. Conard went down a man again in the fourth and once again Simsbury made them pay the price. With 12 seconds remaining in the penalty, the Trojans scored their 13th goal of the game, and the Trojans coaching staff began subbing in players. Loveland – who was the difference-maker in the game – made way for the backup goalie. 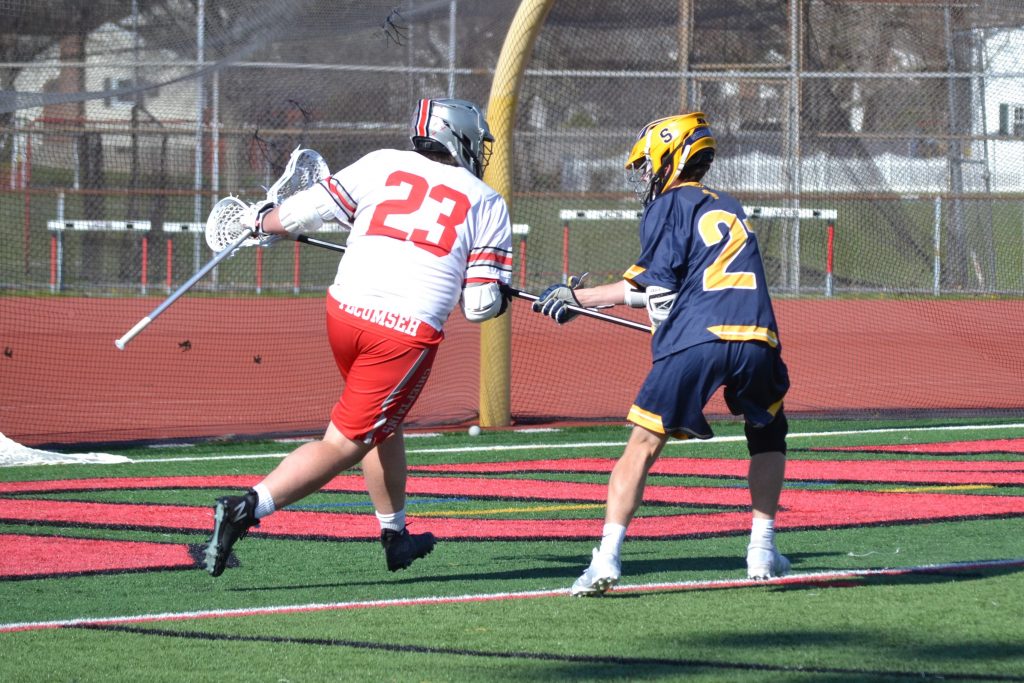 As the clock wound down, Conard kept working and was rewarded with three more goals over the final three minutes of play. After a long clear from Dalton, Luke Shaffer found Brayden Grainger crashing to the net, and Grainger scored Conard’s fourth goal. Fifty-four seconds later, Tousignant scored his fourth of the game on a solid individual effort. After getting ball out high, he maneuvered his way through and around a series of defenders before firing off his shot.

With just eight seconds remaining, Shaffer ran at the right side of the net, drawing the goalie and Simsbury defenders towards him. He found Casden Parker coming around the other side of the cage and fed him a great pass that Parker converted for the games final goal.

The Chieftains are back in action on Monday when they host 2-4 Rocky Hill at McKee Stadium. 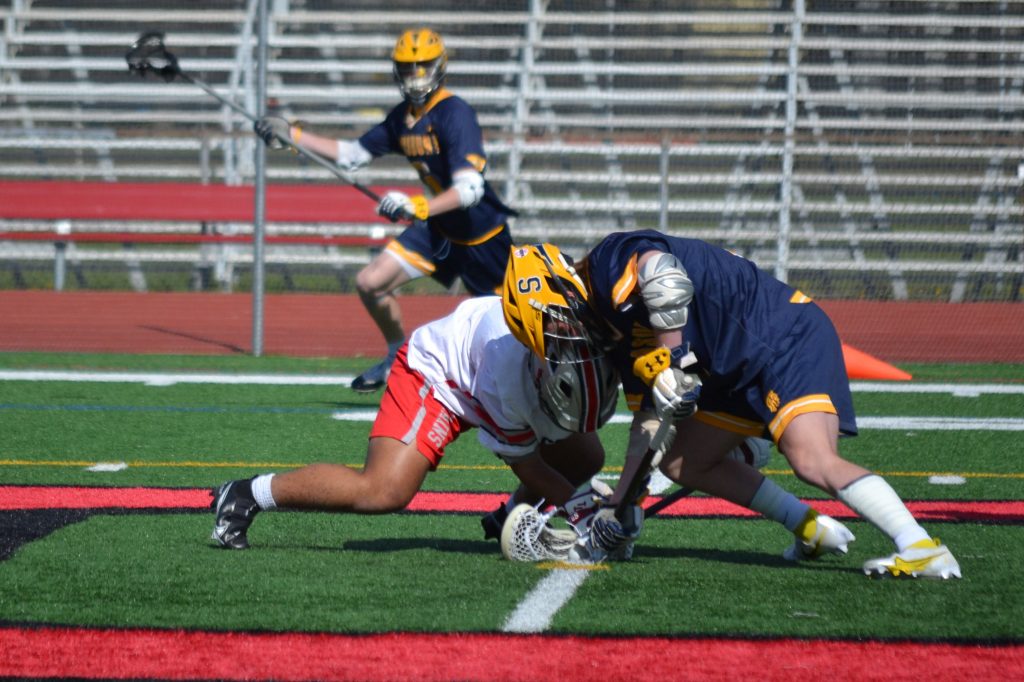