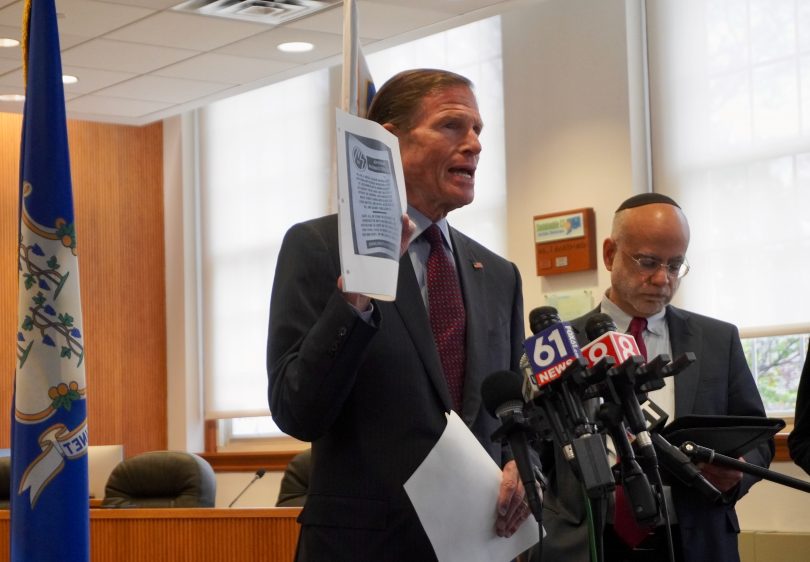 U.S. Sen. Richard Blumenthal (left) at a press conference in West Hartford Monday, holds up a copy of a neo-Nazi flyer that was distributed in town last week. At right is Jewish Federation of Greater Hartford President David Waren. Photo credit: Ronni Newton 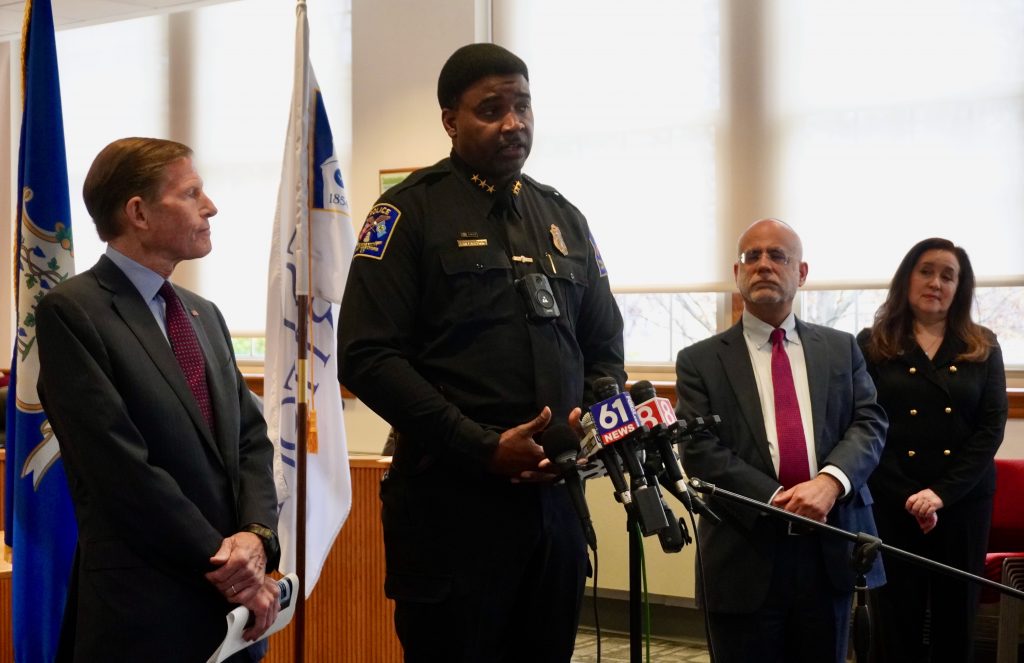 Blumenthal, who led the passage of the bipartisan and strongly-supported Jabara-Heyer NO HATE Act, said the measure will provide $26 million in federal funding, including $5 million in grants that will be available for states and municipalities. The funds can be used to establish better data collection and reporting systems for incidents including hotlines, and can also be used to connect victims to support services and educate law enforcement on techniques to identify and investigate hate crimes.

The purpose of the Jabara-Heyer NO HATE Act, named in commemoration of hate crime victims Khalid Jabara and Heather Heyer, is to educate and enforce, and can make a difference, the senator said.

Funding is available now, Blumenthal said, and Riddick said West Hartford Police will be applying for grants as soon as possible.

“We’re here to support the police in their effort against hate crimes, and hate violence, and discrimination,” Blumenthal said. “The police are the tip of the sphere in this effort to counter the kind of hatred that we see not only continuing but rising.”

The investigation into the most recent incident is ongoing in West Hartford, and Riddick praised the collaboration and communication with other agencies including federal law enforcement. Those who distributed the flyers want to work in the darkness. “We need the public’s help with this. This is the epitome of community policing, is the law enforcement, public safety, and the community working together. You have to notify us,” he said.

The flyers distributed in West Hartford last week – which state that the New England Nationalist Social Club is “building a network of like-minded men and women defending their lands and their people” and that the group stands for “the security and prosperity of white New Englanders,” – encourage violence and are the most visible and recent of “the kind of vicious, insidious virus that continues to exist and spread in our society,” Blumenthal said.

“Beyond these most heinous crimes are the rise in anti-Semitism, the rise in anti-Muslim violence. … We want to make sure action is taken,” said Blumenthal, to support police to “track down and crack down” with remedies that include making those who commit hate crimes work in support of the group that had been their target. A prime example of the success of that approach took place recently in Meriden, CT, where a man convicted of firing shots into a mosque sat down with its leaders and now considers himself a changed man who promotes the Ahmadiyya Baitul Aman Mosque’s message. 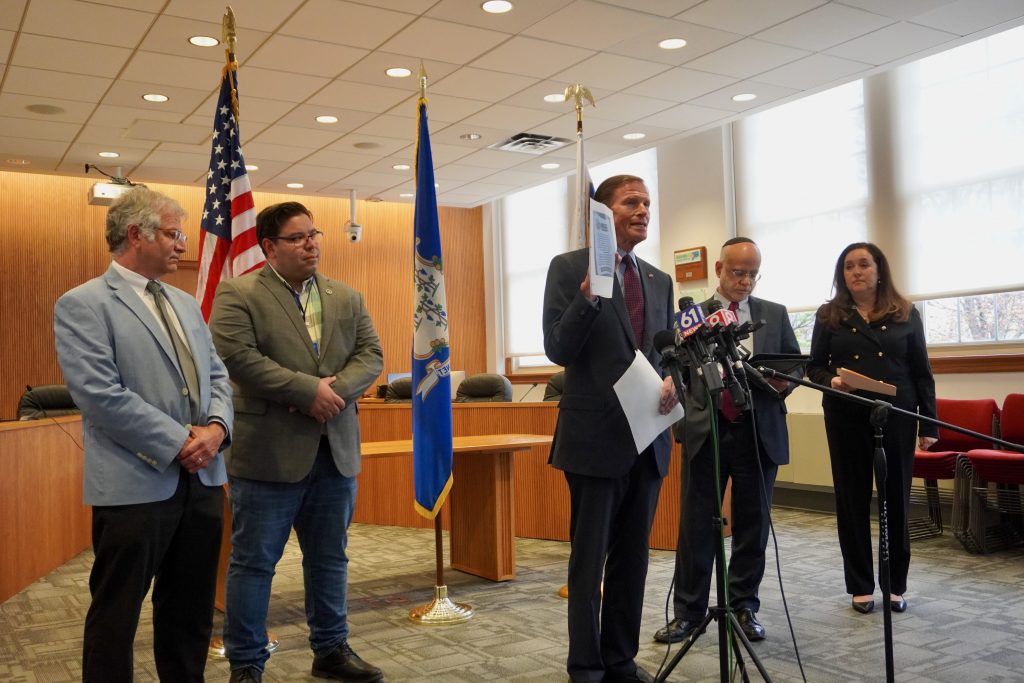 Sobel, recently named Connecticut regional director of the Anti-Defamation League, said there is fear in Connecticut as she noted incidents that include a middle school student giving a “Heil Hitler” salute, a student with two moms being targeted with a Molotov cocktail, worshipers at a synagogue being pelted with rocks, and bomb threats at a local Jewish Community Center.

“And when West Hartford woke up last week to find the white supremacist propaganda flyers that this senator held up strewn around this beautiful town, there is fear,” Sobel said. 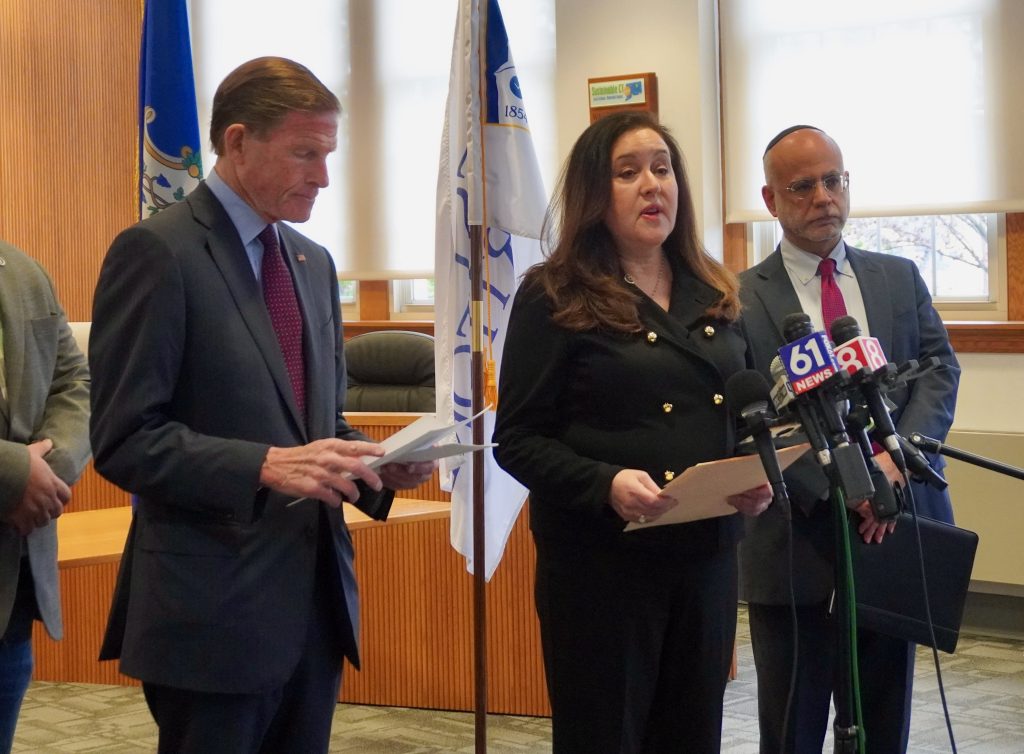 The NO HATE Act will improve funding for tracking and monitoring, Sobel said. “As the NO HATE Act states, we must first have complete and accurate data to understand the full scope and scale of hate-motivated violence.” She urged reporting of incidents to ADL – which can be done anonymously – and said the organization will continue to work with law enforcement and “doggedly and tiredly pursue our mission of fighting hate for good.”

The ADL’s “H.E.A.T. Map” (hate, extremism, anti-Semitism, and terrorism) is a visual document detailing incidents, and can be drilled down by town. It indicates that there have been three reported hate incidents in West Hartford in the past year, including two incidents of flyer distribution and another act of anti-Semitism.

Hate crimes are chronically under-reported Blumenthal said, and the NO HATE Act includes incentives for police to establish their own reporting. 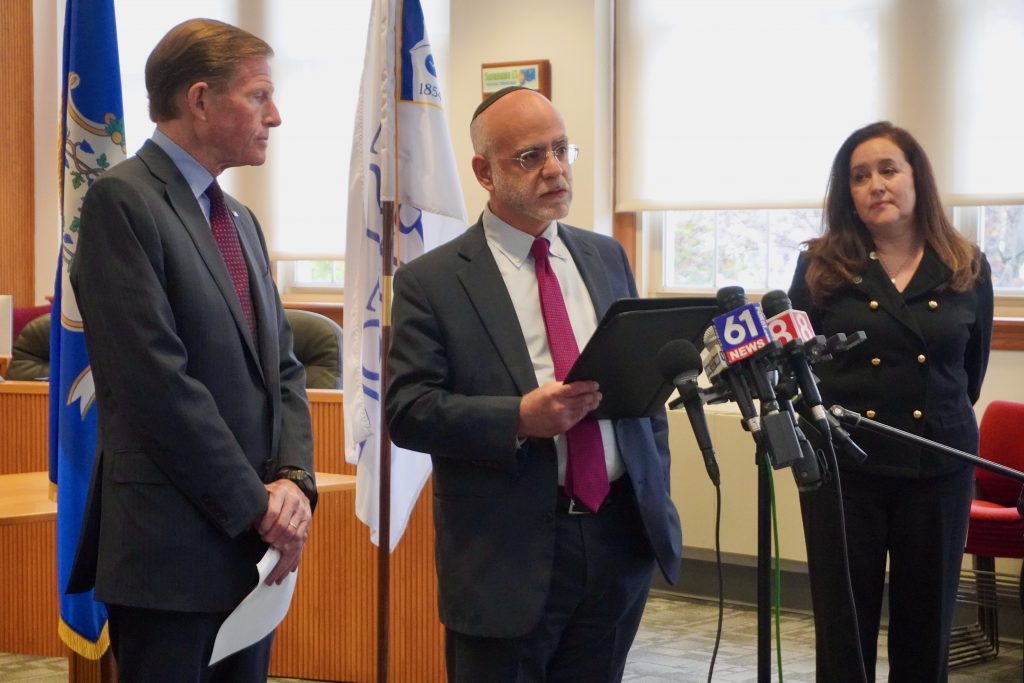 Waren said he’s been standing with Sen. Blumenthal at press conferences regarding hate crimes for nearly three decades. “Never did we imagine the level of bigotry, the expansion of hate groups … and the explosion of hate crimes that we are now witnessing.”

Laws, leadership, and education, all components of the NO HATE Act, are keys to effectively combat the trends – improving reporting and assistance to victims, providing training and education to law enforcement, and utilizing education and community service for rehabilitation, Waren said.

“It also expands the role of the Department of Justice’s Community Relations Service Division. I’ve personally worked over many years with CRS personnel. Their leadership in fostering dialogue, mediation, and assistance to communities facing discrimination-based conflict is invaluable.”

The resources that will be supported by the NO HATE Act will bolster the ability “to combat extremism, to protect our institutions, stand up for each other and with each other,” to ensure the community “remains inclusive, respectful, and united in our opposition to all forms of bigotry and hate,” Waren said.

Blumenthal told reporters that it didn’t matter which streets in West Hartford were chosen for distribution of the neo-Nazi flyers last week, or whether they were tossed from cars or hand-dropped on porches and stoops, but what matters is that they “degrade and desecrate anyone who is different,” over-appeal to prejudice and bias, and are a sign of spreading the COVID-like virus of violence and extremism.

The flyer, “is the very tip of the iceberg,” Blumenthal said, enlisting membership, intended to “ignite, encourage, embolden, and eventually mobilize” the group promoting white supremacy.

For every one of the flyers distributed, there are thousands more incidents of hate on the internet, Waren said.

The Anti-Defamation League describes the New England Nationalist Social Club as a neo-Nazi group espousing racism, antisemitism, and intolerance in online posts, and said members see themselves “as soldiers at war with a hostile, Jewish-controlled system that is deliberately plotting the extinction of the white race.” Sometimes these types of groups require their members to pass out leaflets as a rite of membership, Sobel said, an activity which in itself may not be a “hate crime,” but is certainly a “hate incident.”

While sometimes there can be a reluctance to make hate incidents public, thinking that’s exactly what the perpetrators are looking for, Blumenthal said it’s important to report, to take it seriously, to understand that it’s not a prank, to condemn.

Monday’s press conference was held in West Hartford not only because of the recent incident of flyer distribution, Blumenthal said, “but also West Hartford and its police are really the epitome of acting responsibly, and responsibly to investigating and apprehending, and trying to deter and prosecute.”

Collecting information is key, and the distribution of the flyers could be a precursor to a crime, Riddick said. He said the New England Social Club may be recruiting, and police and their partners are carefully looking for any social media and other reactions to the incident.

“We are going to jump on this,” Riddick told We-Ha.com regarding available grant funds from the NO HATE Act. He said the town would use any funds received for data collection, including software, perhaps establishment of a hotline, and education of staff and the public.