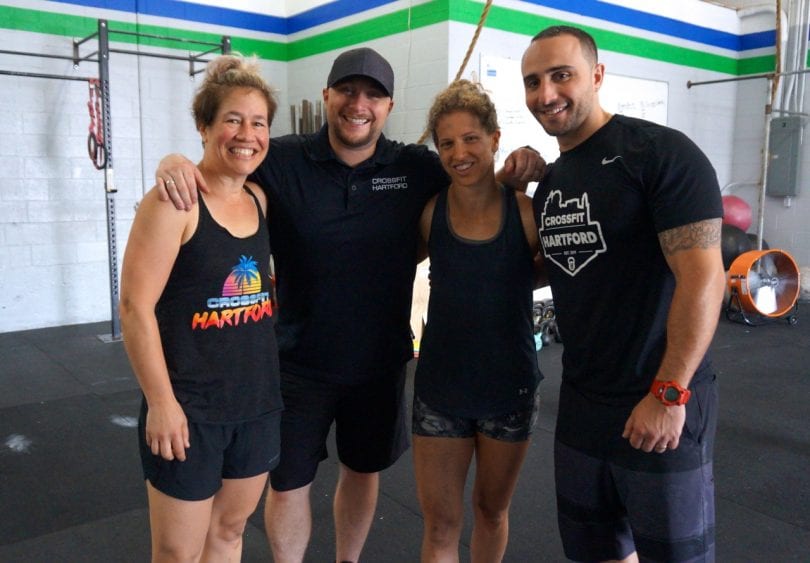 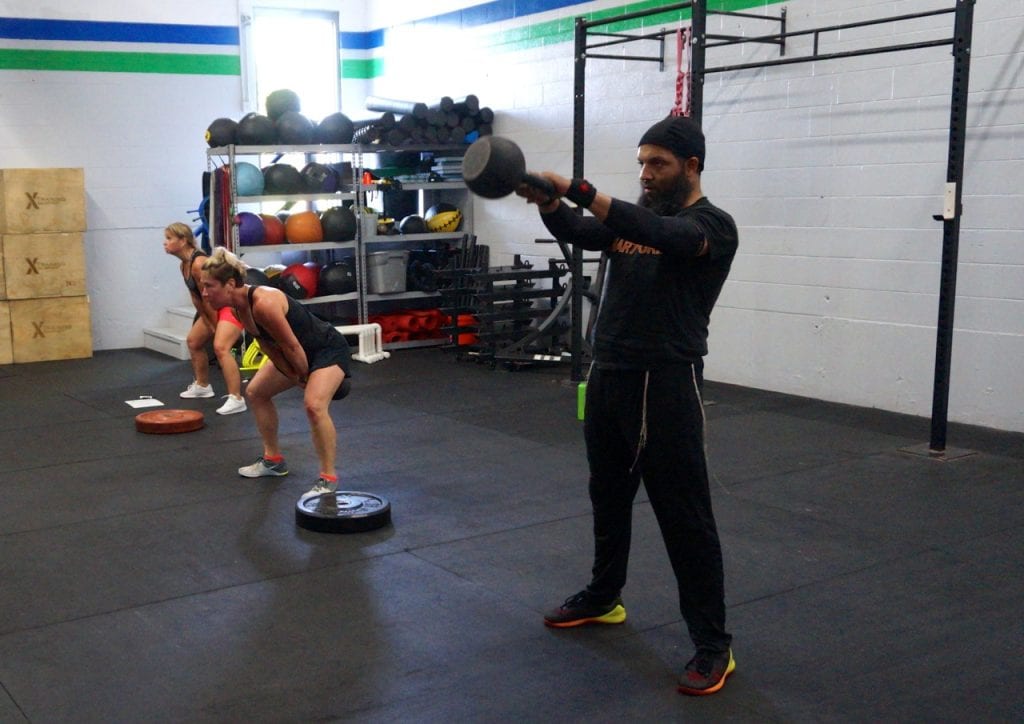 Many runners think the only way to become a better runner is to push their bodies to run faster or farther, by running more miles or by doing interval training to increase speed.

Many runners think that CrossFit is only for people who want to build muscle mass, and that it only involves hurling large truck tires and other heavy objects, or navigating X Games-type obstacle courses, or doing pull-ups or handstand push-ups. 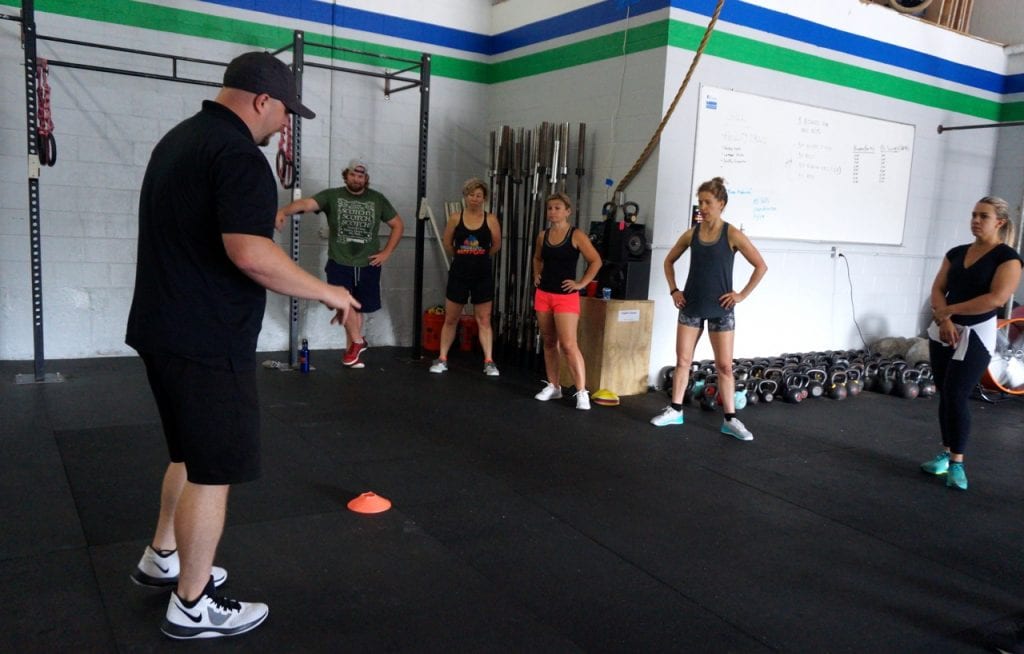 Both of those assumptions are essentially false, but sometimes “do as I say” isn’t a strong enough message.

Several years ago her daughter, now 8, was diagnosed with autism. “I needed something to make me tough,” Udal said. She had received a Groupon for CrossFit, and decided to try it out.

Udal wanted to run a half marathon, and said that her CrossFit coach, Kevin Doyle, said, “Let me train you with CrossFit.” Her previous PR (personal record) was 1:53. Training exclusively through CrossFit workouts, with only a few long-ish runs, Udal ran 1:44.

“When I hit the wall [during the race], the retraining of my brain [from the challenges of CrossFit] kicked in,” she said.

Blozy is a runner, and she owns a running store. Running is her lifeblood. But she saw what CrossFit had done for Udal, and gave it a try.

“When you get older you get slower, but you don’t have to get as slow,” Blozy said.

Blozy signed up for CrossFit, and she got stronger. And when she decided to run a half marathon, she agreed to let Doyle train her. After 12 weeks of training, she was shocked when she dropped her average per mile pace from 9:30 to 8 minutes. She ran the last mile of the Flying Pig Half Marathon in 7:45. Click here to read more of her story.

Two weeks ago, Udal, her husband, both of their children (ages 6 and 8), Blozy, and several others went for a hike. From the base to the top of Mt. Washington. Udal and Blozy said the CrossFit training was the difference maker. After the hike, when Udal carried one of her kids to the car, she really appreciated her strength.

Doyle, who lives in Hartford, played football at Assumption College. He coached several sports at Northwest Catholic High School in West Hartford, and then was the head strength and conditioning coach at Trinity College.

Balkun, a West Hartford native who still lives in town, is also a former football player (Endicott College) and former professional boxer. He and Doyle met when both became trainers at New York Sports Club in Blue Back Square.

A workout Tuesday morning started with running several warm-up laps in the parking lot. No one complained about the heat or humidity.

The age range in the class was probably mid-20s to mid-50s. One woman had just given birth six weeks ago, and her baby slept in a carrier in the corner. 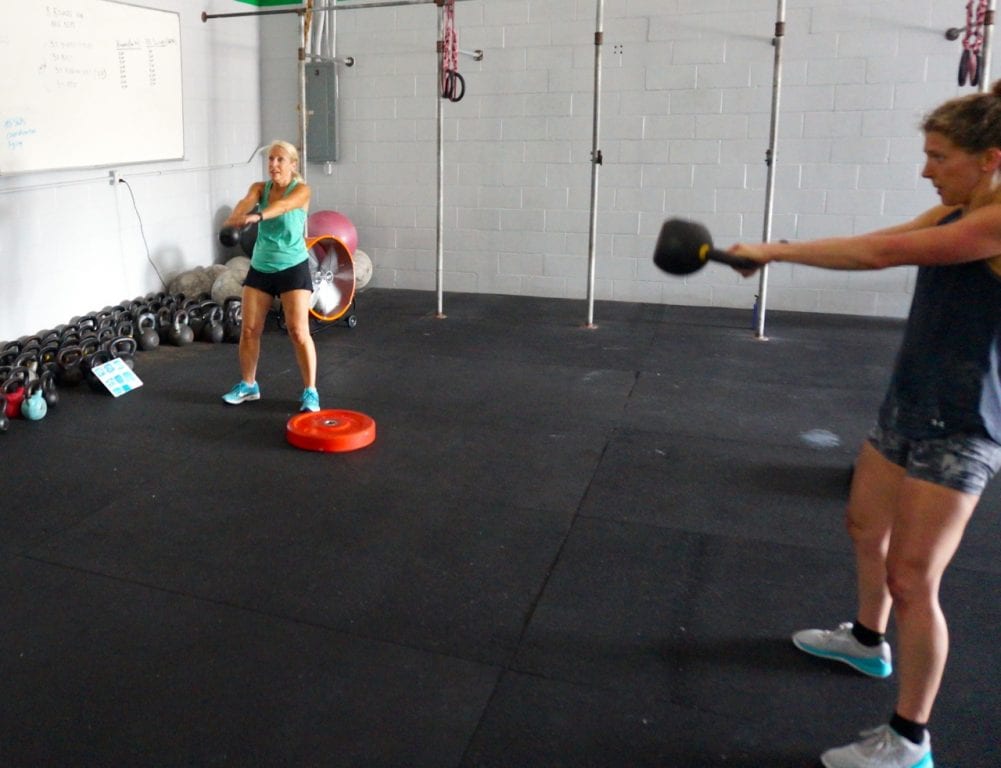 Tuesday’s class also included a We-Ha.com editor who was happy that she would not have to hurl truck tires or attempt a handstand.

Back indoors there was more warm-up, some sprints that some would call “suicides,” and agility drills. Doyle, who was leading the class, was encouraging as he watched everyone’s form carefully.

Everyone worked at their own pace, at their own level. Everyone was tired at the end. [Editor’s note: I’m a longtime runner who has completed more than a dozen half marathons, and I do strength classes at a local gym about three times a week. I’ve done burpees before, but probably never more than 10 in a single day. I think I managed just over 50 during the session. And this was the first time I had ever touched a kettlebell. I was tired at the end, but felt empowered. I would definitely do it again.]

“Full body movement yields much better results,” Doyle said. “Runners exist so much in one modality, but we can increase endurance, increase metabolic pathways.” 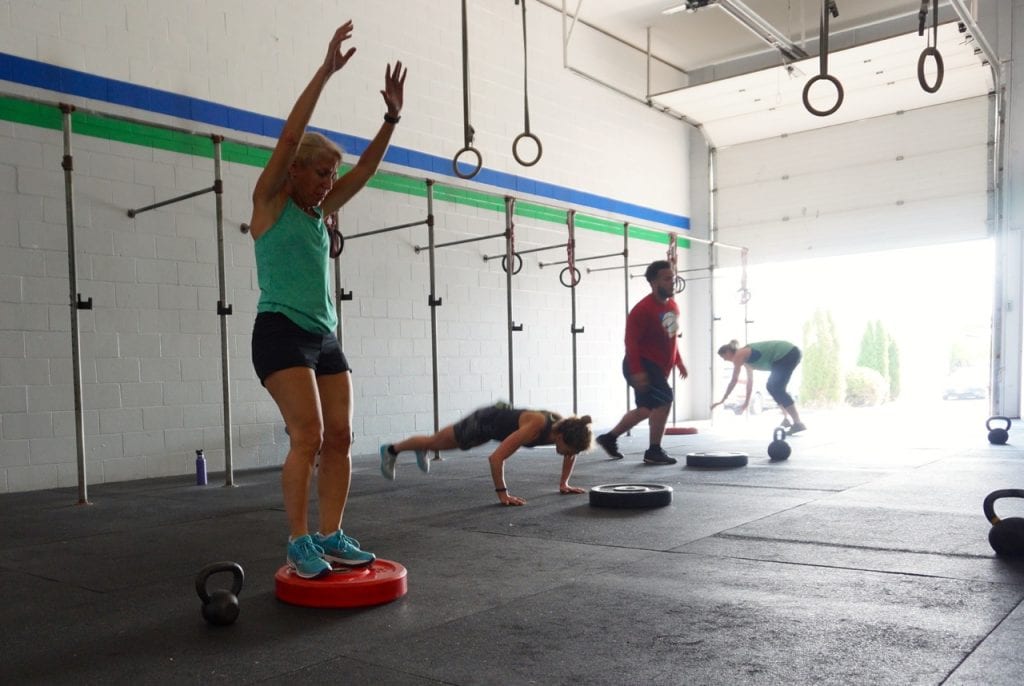 Including CrossFit as part of a training program for a race can have much better results in much less time. And the workout is infinitely adaptable for a participant’s fitness level. Some have used it for weight loss, and Doyle said one of the participants in Tuesday’s class had lost 50 pounds since he started. Another participant was training for a fitness exam to become a police officer.

“We don’t coach the program, we coach the athlete,” Doyle said. Proper form and safe movement is critical. He said that while during the agility drills he likened his role to a swim instructor, “during the workout, I’m the lifeguard,” he said. “Lifeguards don’t cheer for you while you’re drowning.”

Balkun said it’s important for the human body to be able to do different things. “We all need to push, pull, lunge.”

CrossFit, Blozy said, helps with the activities you do day-to-day as well with running, and can help people regain flexibility and balance that often diminish with age.

CrossFit is not a franchise program, but use of the name requires an affiliation with the national program. As opposed to most fitness facilities, passing the certification is necessary before opening a CrossFit gym.

Fleet Feet now has a established several programs in collaboration with CrossFit Hartford as well as CrossFit Simsbury. Other Fleet Feet stores throughout the country have started collaborations as well.

CrossFit for Runners is an 8-week program is a collaboration with Fleet Feet that begins on Sunday, Aug. 5 at 9 a.m. Hour-long sessions are Sundays as well as Tuesdays and Thursdays at 6:30 p.m. In addition to being held at CrossFit Hartford, there is a partnership with CrossFit Simsbury. Prior CrossFit experience is not required, and classes focus on agility, strength, and conditioning. There’s no hurling of truck tires. Activities include rowing, interval training, and training with kettlebells and medicine balls. Click here for more details.

Fleet Feet is also offering a CrossFit Half Marathon Training program, with the Oct. 13 Hartford Half Marathon as the end goal. Doyle is coaching the program, and it includes two or three group runs per week through Fleet Feet, as well as three CrossFit classes. The program began on July 23, but there are a few spaces left. Click here for details. 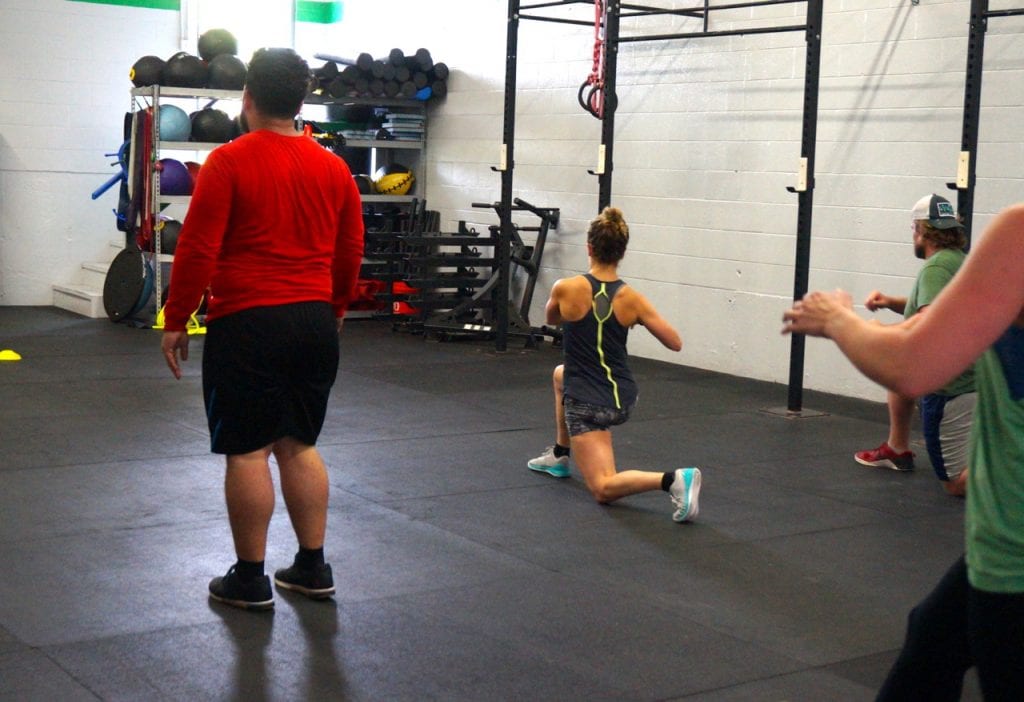 Lunges are part of the warm-up at CrossFit Hartford. Photo credit: Ronni Newton 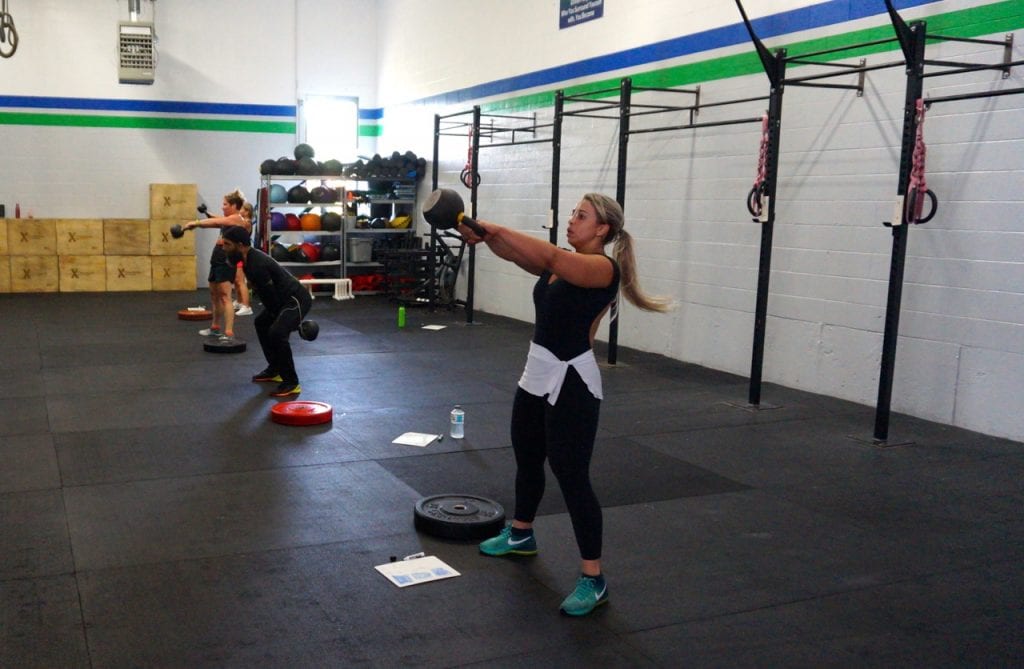 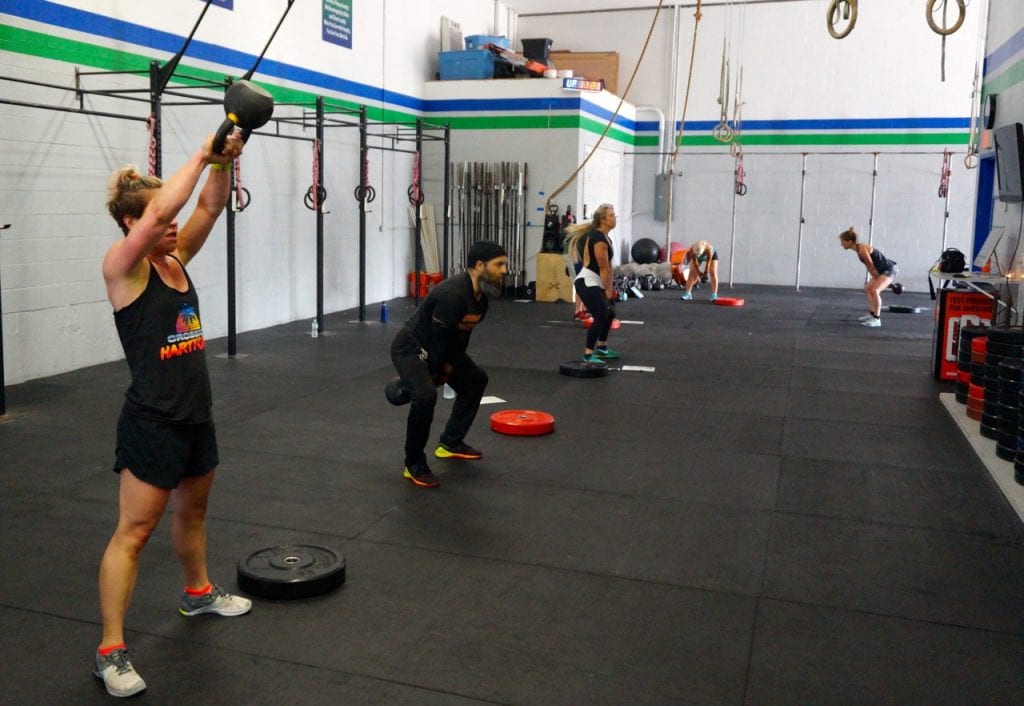