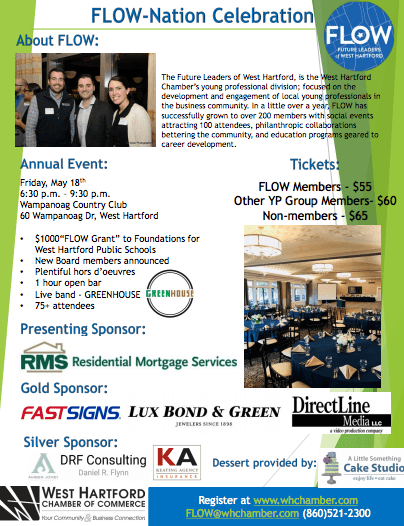 The Future Leaders of West Hartford (FLOW), which was founded in late 2016, will hold an inaugural celebration on May 18.

As FLOW (Future Leaders of West Hartford) gets set to hold its inaugural celebration, announce its new officers, and present a scholarship, President Kristen Gorski is very excited about the direction the organization is taking.

On Friday, May 18, FLOW – the West Hartford Chamber of Commerce’s young professional division – will celebrate its achievements and look toward the future at the FLOW-Nation Celebration, an event intended to be a combination annual dinner and social event. FLOW-Nation will be held from 6:30-9:30 p.m. at Wampanoag Country Club.

“It’s going to be similar to the Chamber’s annual dinner, but with a few twists,” Gorski said.

The event won’t be a sit-down dinner but instead will include heavy hors d’oeuvres and a one-hour open bar. There will be a short presentation of the 2018-19 Board of Directors, followed by a presentation of a $1,000 FLOW grant that will be awarded through the Foundation for West Hartford Public Schools (FWHPS), before the evening concludes with dancing to the live band Greenhouse.

“It will be a cool, fun way to end the night,” Gorski said of having a band. “We really want to celebrate where we are.”

Gorski said she is particularly excited about FLOW’s ability to award a grant through the FWHPS. The recipient hasn’t yet been named, but she said that the organization will have a role in choosing who to award the grant to from among the hundreds of applications received from teachers throughout the district.

Foundation grants are a great way to provide learning outside of the regular curriculum, and Gorski said she is glad West Hartford provides that opportunity. Supporting school age children is part of the organization’s mission.

“We’d really like to grow the philanthropy piece, focused on youth in the local community,” West Hartford Chamber of Commerce Associate Director Morgan Hilyard, who is also a member of FLOW’s executive board, said previously.

FLOW was founded in December 2016, and has accomplished a great deal in a short amount of time, Gorski said. The organization now boasts more than 200 members, and has held social events that have attracted more than 100 people, and has also hosted educational forums and gotten involved in philanthropic efforts throughout the area.

“The community has been really supportive of us, and we will continue to find other ways to get involved,” Gorski said. “Our mission is to empower the next generation, to help them stay around.”

FLOW-Nation is open to FLOW members as well as others in the community who are interested in attending. It’s targeted to those who fall into the “young professional” age group (21-40), but not exclusive.

Tickets to the event are $55 for FLOW members, $60 for members of other young professional groups, and $65 for non-members. Attendance at this inaugural event is expected to be at least 75.

Gorski said that other young professional groups from the area are specifically being invited, to network with and see what the West Hartford group has been doing, and to support one another.

The FLOW-Nation Celebration will be held on Friday, May 18, from 6:30-9:30 p.m. at Wampanoag Country Club, 60 Wampanoag Dr., West Hartford. The dress code is business formal/cocktail attire.

Tickets and additional information can be found on the West Hartford Chamber of Commerce website.