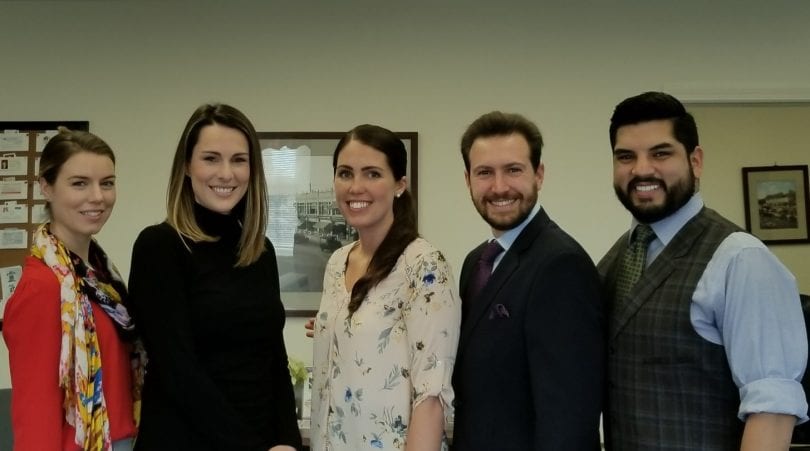 FLOW, the Future Leaders of West Hartford, is embarking on its second year in existence with a growing membership base and a clear mission to support young professionals in the community.

Just over a year after being launched, FLOW – the Future Leaders of West Hartford – has hosted numerous successful events and attracted a membership of approximately 200 as the organization furthers its mission of engaging area young professionals in productive ways.

As the new president of FLOW, Kristen Gorski has plans to focus programming on education and philanthropy targeting youth-related organizations as well as providing networking opportunities for members.

Gorski had been vice president and took over the role of president when FLOW’s founder Ryan Keating stepped down at the end of 2017. She works as the economic development specialist for the Town of West Hartford and was recently named co-chair of the Programs Committee for the Connecticut Economic Development Association.

Gorski and the other executive board members – Morgan Hilyard, Amber Jones, Matt Banever, Aaron Bohigian, and Maria Angelico – have been meeting monthly to plan programming as well as ways to gain membership.

On Monday, Feb. 12, FLOW hosted a Small Business Luncheon at West Hartford Town Hall that attracted a capacity crowd of 48 people. A diverse panel of local business owners – Amber Jones of Amber Jones Photography, Billy Grant of Restaurant Bricco and Grant’s, Neil DiBicarri of Unishippers, and Eric Brown of West Hartford Lock – discussed the challenges and rewards of business ownership, and the unique paths that led each to where they are today. Cailin McBee, owner of Balance Massage Therapy, served as moderator.

“It was a really great program, and something we’d like to do more of,” Gorski said. She would like to have social/networking events every other month, alternating with more educational programming, targeting what members have indicated they find beneficial.

“We’d really like to grow the philanthropy piece, focused on youth in the local community,” said Hilyard, who works as associate director of the West Hartford Chamber of Commerce, of which FLOW is a division.

This year FLOW will be funding a $1,000 grant for the Foundation for West Hartford Public Schools (FWHPS). “It’s a perfect opportunity to really reach youth,” Hilyard said. The recipient will be announced at FLOW’s annual meeting and social event which will be held May 18 at Wampanoag Country Club.

FLOW will also support FWHPS at the annual West Hartford’s Cookin’ fundraising event on Saturday, March 24, and will be doing a Junior Achievement Day at Wolcott Elementary School.

Supporting school-age children “really feeds into our mission,” said Gorski. Young professionals can relate well to students and are ideally suited to serve as role models and mentors.

Hilyard said part of FLOW’s mission is “succession.” Today’s students are tomorrow’s FLOW members, and those involved with FLOW develop an understanding of the benefits of being involved with the West Hartford Chamber of Commerce, something younger professionals may not yet realize.

FLOW is free to individuals who work for businesses that are already Chamber members, and they account for about 75 percent of the membership. The other 25 percent pay $50 dues to become FLOW members, but do not get the other benefits of belonging to the Chamber.

Program participation has ranged from 50-100, with a mix of new and returning attendees.

Ultimately FLOW, by focusing on youth and young professionals, is helping build its brand as well as West Hartford’s brand, and adding a new vibrancy, Gorski said.

West Hartford already has a great demographic of younger people, who patronize restaurants and other West Hartford establishments. “We want to provide them with productive resources,” said Hilyard.

“Connecticut has had issues, but we want to show that West Hartford is a really great place to be,” said Gorski. “Young people don’t need to go to Boston or New York. We’re investing in the future of the community.” Helping attract more business helps existing businesses, she said.

FLOW’s next activity will be a social in March. Details are still being finalized, and will be posted on the organization’s Facebook page and website.

On May 18, FLOW will hold its first annual meeting combined with a social event at Wampanoag Country Club. Details are still being finalized, but it will likely be from 6:30-9:30 p.m. and include cocktails and heavy appetizers as well as a live band. The FWHPS grant will be presented as well.

“We are working on our board development process for our 2018-2019 fiscal year,” Gorski said. “We’re excited to retain some of our current board members and look to bring in new ones.”

The new board will be presented at the May 18 event, but Gorski said she would be willing to retain the leadership role. “If the board of directors and  membership are happy with the direction of the group based on my time as president and would like me to continue, I’d be open to the idea.”

FLOW is really picking up steam, but Gorski said it has plenty of room to grow.