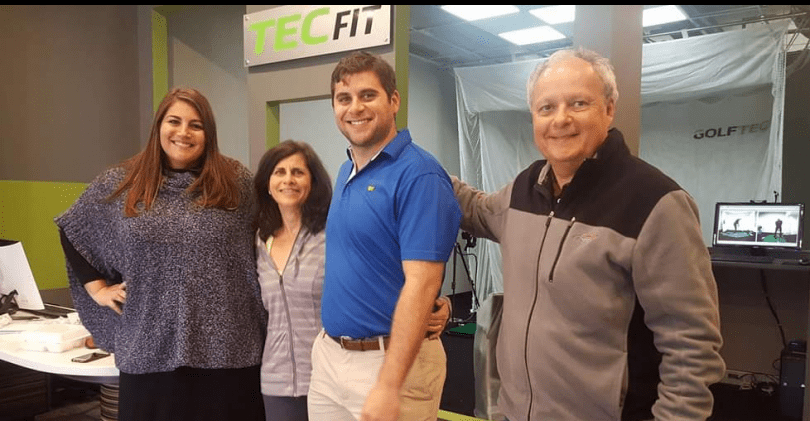 Dave Souza is co-owner and manager of GOLFTEC in West Hartford, and his wife and parents are also co-owners and actively involved with the business on multiple levels.

You could practice your golf swing endlessly at the local driving range, hoping you might improve your golf game.

Or you can head to GOLFTEC, a golf training center in West Hartford that offers a technology-based system that analyzes and evaluates your golf swing, then sets you up with lessons and your own golf pro or “coach” who instructs you on exactly what to do to improve your game.

“Our goal is to help people play better golf,” said Dave Souza, co-owner and manager of the West Hartford GOLFTEC and one of the center’s certified personal golf coaches.

For Souza, GOLFTEC is a family affair.

The West Hartford native and his wife Shannon opened the state-of-the-art GOLFTEC center on New Britain Avenue in March 2017, along with his parents and co-owners, Bill and Michelle Souza, who also live in West Hartford. The family now owns the franchise rights for GOLFTEC in Hartford County and plans to open even more of the training centers down the road.

“The response has been great,” Dave said, noting that word of mouth from satisfied customers drawing in more customers.

“It just seems to be snowballing in a really positive way,” he said.

GOLFTEC is the perfect business for the Souzas, two of whom are longtime golfers and passionate fans of the sport … and two of whom are in the process of following in their footsteps.

“My dad and I are the primary golfers,” said Dave. “My wife is starting to learn, and my mom is also in the process. They’re GOLFTEC students.”

“I’m learning now because I have a really good coach – my son David,” Michelle said with a laugh. “It gives me a social, physical outlet that I wouldn’t have otherwise. And it doesn’t take a team. You can play by yourself; you can play with a group; you can play as a couple. That’s also pretty fun.”

Dave says he fell in love with the sport of golf as a kid after attending the Canon Greater Hartford Open – now the Traveler’s Championship – with his father.

“I was 10 or 11 years old, and I just fell in love with the athleticism and the finesse of the sport. I’ve been passionate about golf ever since,” he said.

Young Dave immediately asked his dad for a set of golf clubs – and the rest, as they say, is history. He and his father have been golfing together at Rockledge Golf Club ever since.

Calling his dad “a great athlete,” Dave said the elder Souza played baseball for Amherst College, among other sports, until he decided to switch courses and try out for the college golf team. He quickly fell in love with the sport.

“I love the humility of the game, the camaraderie, the physical part of it as well as the personal challenge,” said Bill. “You can play it until you are old, and anyone can play because of the handicap system. It’s a game that everyone can come together to play.”

A 2005 graduate of Hall High School, Dave took his passion for the sport to Florida State University where he majored in professional golf management. Following graduation, he set out to find a job in the golf world in New England, to be close to Shannon, to whom he was then engaged and who was working in Boston. In 2010, he found what he was looking for at the Burlington GOLFTEC Center. He later worked at the Boston GOLFTEC for seven years.

But Dave’s heart was always back home in West Hartford.

“Growing up, I always wanted to try to return and open some sort of golf center in West Hartford,” he explained. “After working at the GOLFTEC in Boston, I knew that it would do really well in West Hartford if we could open up a franchise.”

Headquartered in Denver, GOLFTEC has grown from one small center in 1995 to 200 locations worldwide today.

Dave proposed the idea of opening a GOLFTEC franchise to his parents and they loved the idea. And so in March 2017, Dave and Shannon, and Bill and Michelle opened their first GOLFTEC center on New Britain Avenue in West Hartford.

“When this opportunity came along, we said, ‘We know West Hartford well, we know there are a lot of golfers here and a lot of golf courses nearby. And there is a lot of interest in good physical activity and sports,’” says Michelle. So we just said, ‘Okay, let’s explore it.’ And we did. To be in the position to have a family business where you’ve helped fulfill one of your children’s professional dreams is pretty neat.”

Today, Dave serves as manager and coach of the West Hartford GOLFTEC; Michelle, the former marketing and development director for Jewish Family Services in West Hartford, handles the center’s marketing and does some of GOLFTEC’s corporate marketing; and Bill, a technology executive now retired from Cigna and ESPN, handles the business’s financial and back-office side operations.

“We’re attracting people from all over – people from the Connecticut shoreline, Massachusetts, the Berkshires. Our customers are half local and half long distance. It’s an attraction,” Bill said.

Covid put plans for additional franchises in greater Hartford on the back burner for a while, but as things normalize, the Souzas are hoping to open one or two more GOLFTEC centers within the next few years.

“We’re hoping to open more centers because we’re helping people play better golf,” Dave said. “The more we can get out there and help, the more people will come to the game and that’s our objective.”

A version of this article originally appeared in the June 2021 issue of West Hartford Magazine. To read the entire magazine, click here.