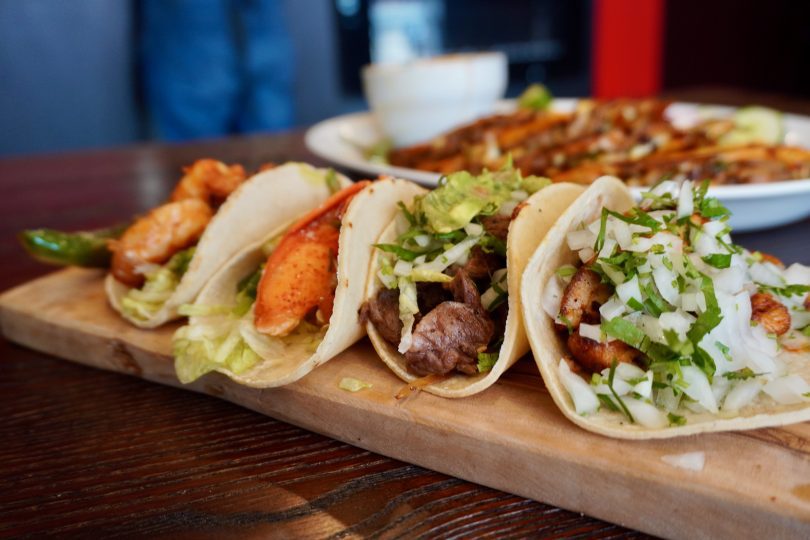 A variety of tacos, with tortillas made from scratch daily, are on the menu at Fuego Picante, 280 Park Road, West Hartford. Photo credit: Ronni Newton

Husband and wife team Omar Bello and Jackeline Garcia have expanded from their food truck into a brick and mortar restaurant on Park Road in West Hartford. 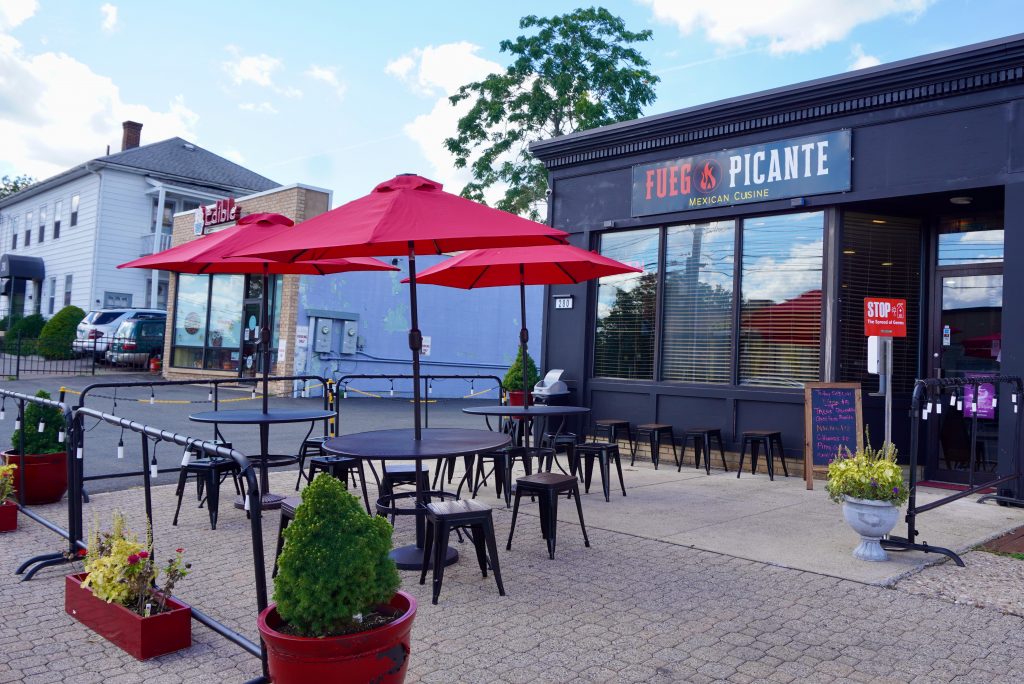 The food served at Fuego Picante is almost exclusively made from scratch, and is bursting with fiery-fresh flavor to match the Spanish meaning of the name of the new restaurant and the food truck owned by Omar Bello and his wife, Jackeline Garcia.

They couple prepares, and serves, the type of food they love – dishes they want to eat themselves, that they want their children to eat. Opening their own restaurant has been a long-time dream.

“My kids eat from here, we eat from here,” Bello said. “Our business is not only to make money. We love what we do. We like good food.” And that’s what they’ve been preparing on their food truck for the past four years, and what they’re serving at the newly-opened Fuego Picante restaurant at 280 Park Road in West Hartford.

Bello originally planned to open Fuego Picante, located at 280 Park Road, for indoor dining right away, but with COVID-19 continuing to spread in the community, he and his wife, who have two young children who are not yet eligible for vaccination, decided to stick to take-out and patio seating for now. Their son, who is 8, is on the autism spectrum and has had health issues in the past, and their daughter is just 5, and he’s trying to limit their exposure as much as possible. 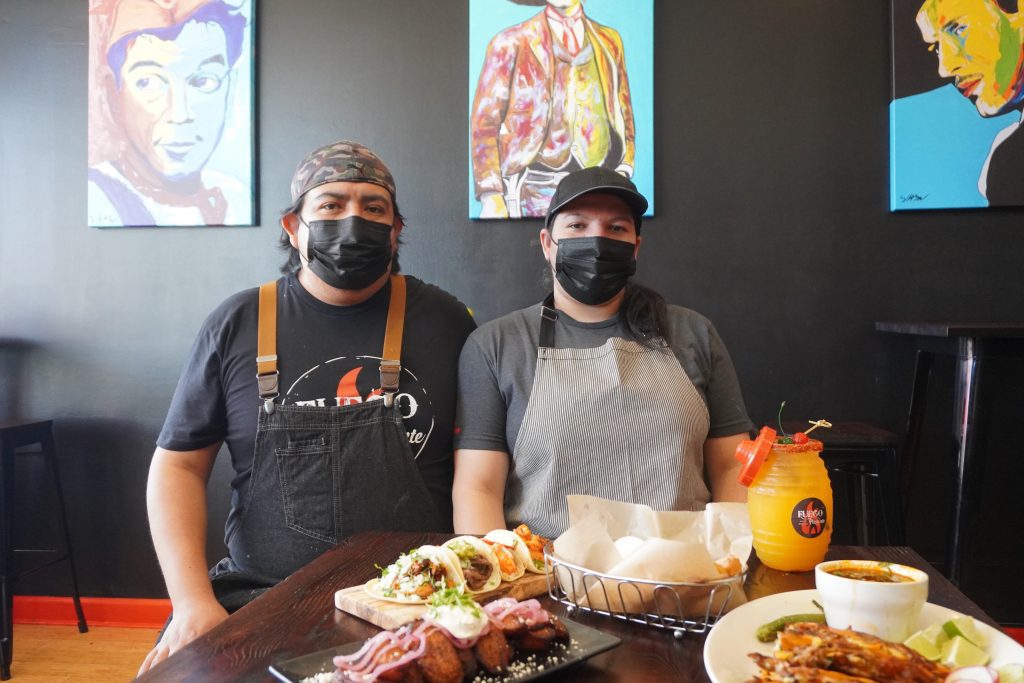 Opening the indoor dining room – which has been repainted and features colorful paintings of Mexican icons like Frida Kahlo and Cantinflas– would also involve bringing on more staff. Like most area restaurant owners, Bello knows finding help is a challenge in today’s job market.

Bello is also continuing to operate his successful food truck, which has commitments throughout the fall, and he can’t be in the restaurant and on the truck at the same time.

“The first month of opening a restaurant is the most important,” he said. Customer expectations are high, and he and Garcia are trying to exceed them.

Bello is originally from Tlaxcala, Mexico – the country’s smallest state – but moved to the U.S. about 22 years ago.

A trained chef, Bello lived in New York for a dozen years. He said he’s done French, Italian, and Japanese cuisine, and for six years ran the first steak and sushi establishment on Long Island, but when he and his wife were preparing about to have their first child they moved to the Hartford area to be near her family.

“New York life is crazy,” he said, and that factored into the decision. Working 12 or more hours a day would have been very hard on the whole family.

“When we got here I didn’t find a job right away. I wanted to open a restaurant, but the financial situation wasn’t the best,” he said.

One of Bello’s first jobs in the Hartford area was in the very space where Fuego Picante is now located – for the short-lived Hearty Kitchen, which served all-natural comfort food like chicken and waffles, but closed in the fall of 2014 due to the owners’ family/personal situation.

Since opening a restaurant at that time wasn’t realistic, he and Garcia ultimately decided a food truck would be a good place to start.

“We built it together. It was an old junk truck,” Bello said of what is now the black and bright red Fuego Picante food truck.

At first they parked the old white truck in the Walmart parking lot on Flatbush Avenue, just over the Hartford line. Bello said he used to drive by New Park Brewing, where he saw the much slicker Mercado and CraftBird trucks.

“It was an ugly white truck … people eat with their eyes,” Bello said.

“I said, ‘We need to be different,'” Bello recalled. It took time, but they fixed up the truck, and then got a break when Jeff Devereux invited them to be part of Know Good Market in Hartford. They started visiting Hog River, and then GastroPark. They also started catering private events and corporate lunches.

There are numerous other Mexican or Spanish food trucks that park in Hartford, but Bello said being in West Hartford has been better for his business. Owners of other food trucks that operate in town, all with their own concepts, are very supportive of each other. 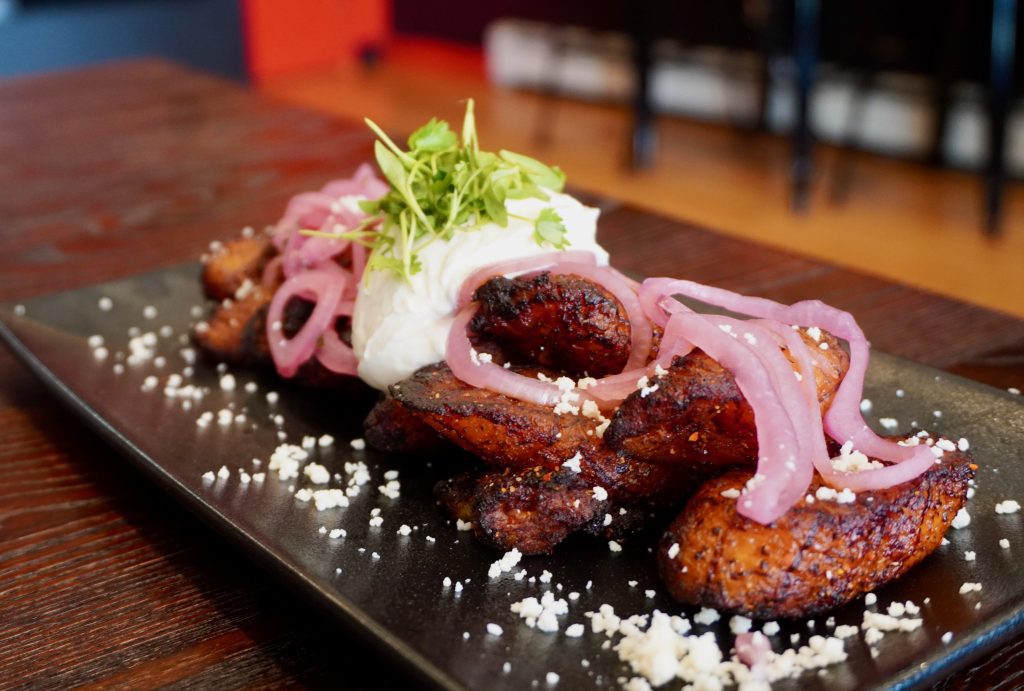 Bello never lost his dream of opening a brick and mortar restaurant, where he would have more space for making homemade tortillas every day and would have the ability to expand the menu.

Bello said for years he thought about the 280 Park Road space and the chicken restaurant where he had worked. “I would like to have a little restaurant like that,” he said.

Several other food establishments have opened and closed in the space, and he’d often think about it when he drove down Park Road, until one day this past April when he was there at the right time, just after Pachanga decided to vacate the space.

“The landlord put up the sign. We called right away,” Bello said.

“Our main thing is to do traditional Mexican food as much as we can,” he said. Fresh tortillas made daily, al pastor prepared trompo style infused with pineapple and caramelized onions, and on Mondays, birria tacos. 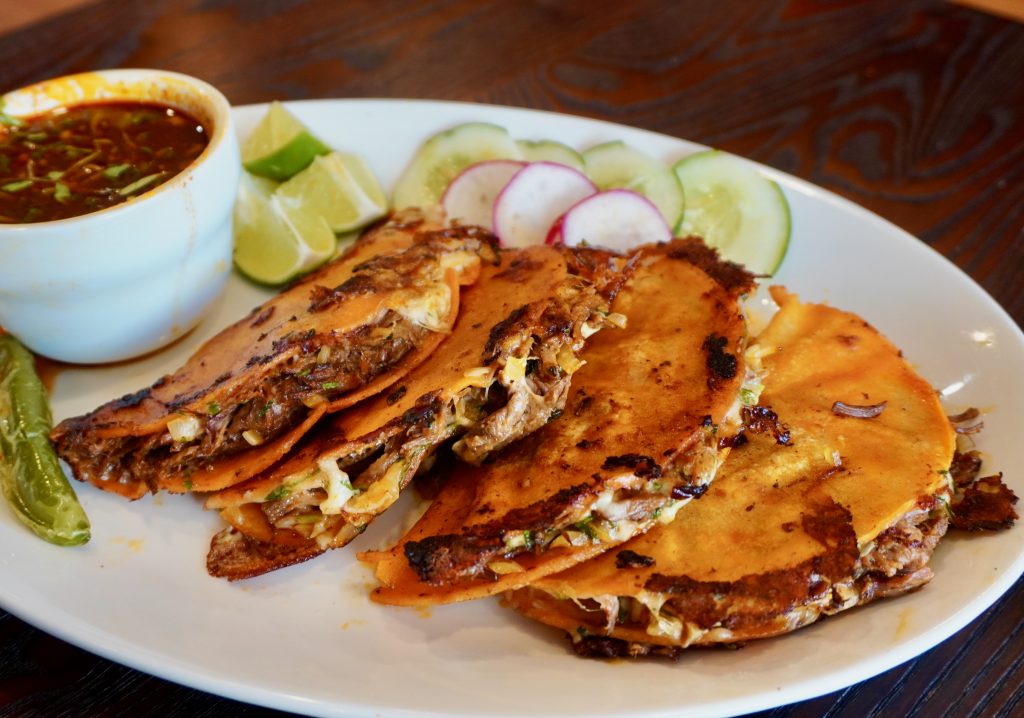 Birria, a traditional dish in Guadalajara, is trendy right now, but Bello said to do the tacos right is very time-consuming.

“Birria takes 10 hours,” he said. You have to simmer the beef in its own juice, and the braised beef, along with Oaxacan cheese, cilantro, and white onion are added in corn tortillas pan-fried in the fat that rises to the top while the beef cooks. It’s traditionally served with a small bowl of consomé for dipping, and at Fuego Picante they’re also accompanied by a spicy sauce and avocado crema to add even more flavor.

“We only do it once in a while … once a week, we make it right. We want it to be good,” Bello said, and birria shouldn’t be the only draw to the restaurant. “We are confident in our food. We don’t need to have birria every day. 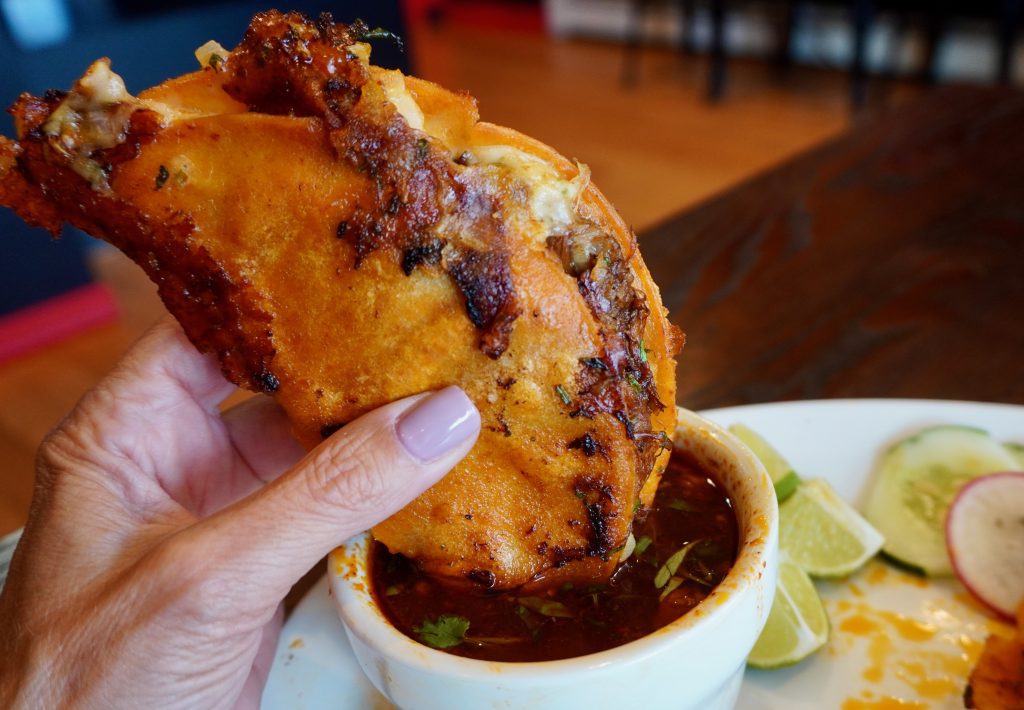 Bello said when they served birria from the food truck on Saturdays in the Walmart parking lot the line would be around the corner, and then it would sell out in three hours. At Fuego Picante on Park Road, Bello plans to serve birria on Mondays, driving business on a day when many of the other area restaurants are closed.

The regular menu at Fuego Picante is fresh and flavorful, with nearly every item made from scratch, in-house, including the tortillas (which are gluten free) and all of the sauces.

“We are not too friendly with cans,” Bello said, adding that there is no microwave in the kitchen.

The beef – including what’s used for the birria – is certified Angus. The prices are a little higher, but Bello said the quality is worth it. The shrimp and lobster in the tacos are plump and flavorful. 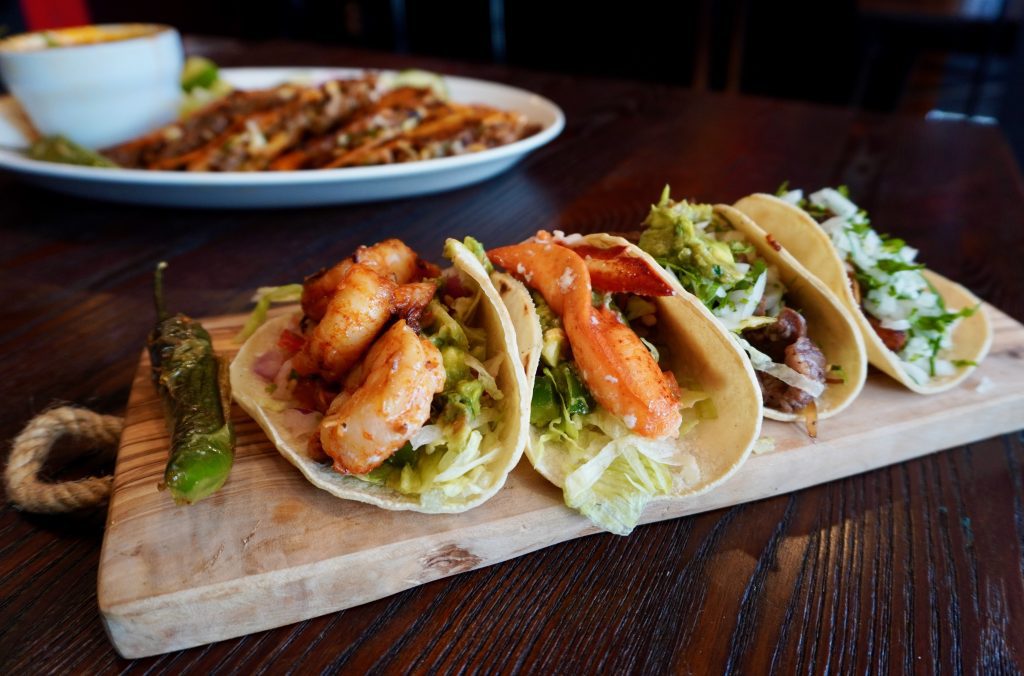 A variety of tacos, with tortillas made from scratch daily, are on the menu at Fuego Picante, 280 Park Road, West Hartford. Photo credit: Ronni Newton

Portions are ample. Tacos are served three to a plate and range from $12 for veggie, chicken, or chorizo to $20 for a trio of lobster tacos served with lettuce, pico, and fresh guac.

West Hartford resident Suzanne Sayers posted the following on Facebook after having lunch at Fuego Picante. “Drop everything you’re doing and RUN to Fuego Picante Mexican restaurant on Park Road. Seriously the best veggie tacos and plantains I’ve ever had.” 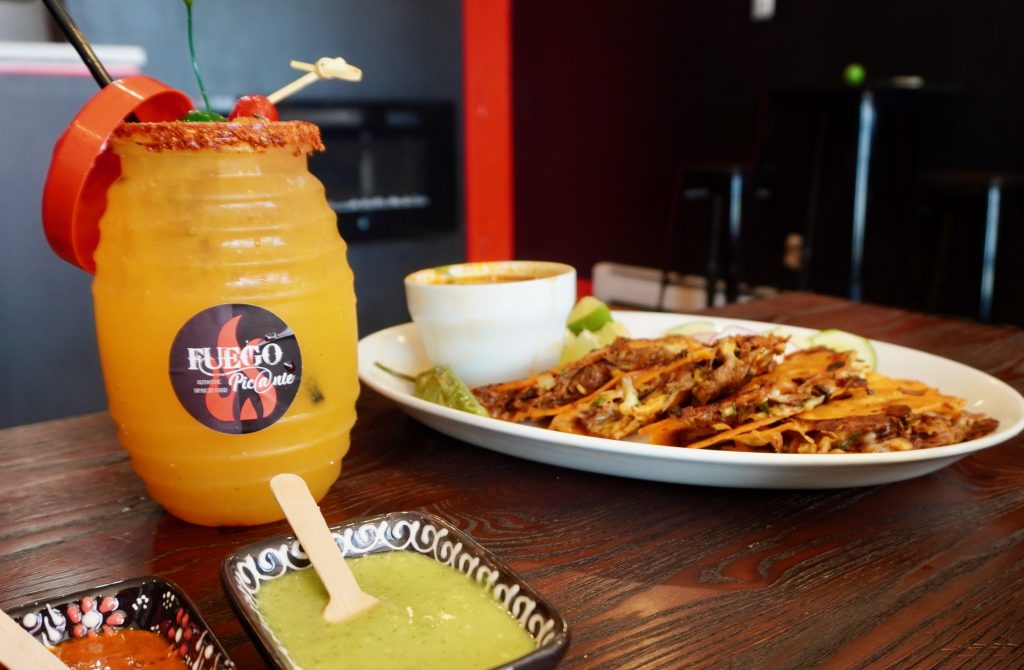 Beverages include Mexican sodas as well as the traditional Mexican Aguas Frescas served in personal-sized souvenir vitrolero cups, the rims artfully dipped in the sweet and sour chamoy and tajin combination. Garcia found the mini barrels from a supplier, and said they’ve been going through at least a hundred a week on the food truck.

If you’re still hungry, there are churros for dessert – deep fried and dusted with cinnamon sugar and served with strawberry sauce and a mini jar of Nutella.

Fuego Picante is located at 280 Park Road in West Hartford. They are closed Tuesdays, and otherwise open from noon-8 p.m. for take-out or dining on the patio. To order ahead, call 860-965-1807.

You can also keep updated about the Fuego Picante schedule by following them on Facebook. 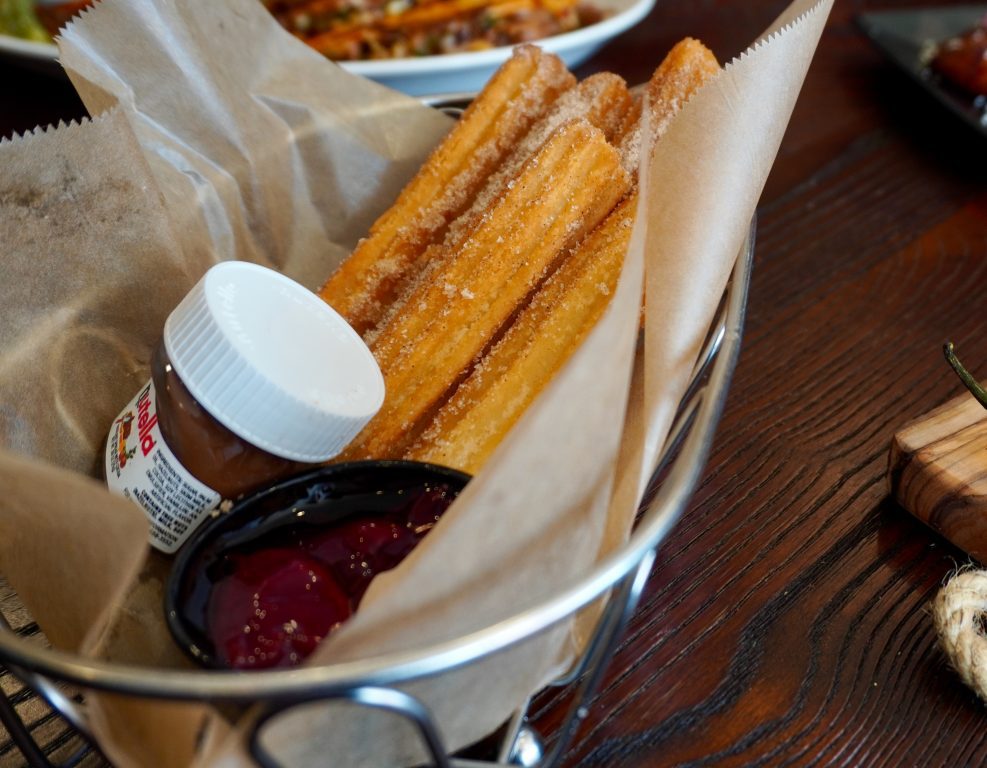 Warm and sweet churros are served with a side of strawberry sauce and a mini jar of Nutella for dipping. Fuego Picante, 280 Park Road, West Hartford, CT. Photo credit: Ronni Newton