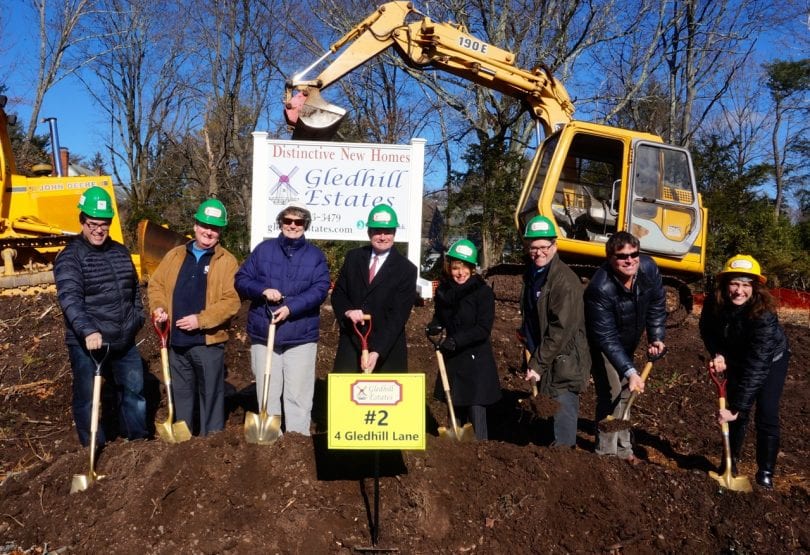 A groundbreaking ceremony was held Monday for Gledhill Estates, an ‘open space’ project to be built on the former Gledhill Nursery property.

Rendering of the “Highgrove” which will be the style of the model home that will be constructed for Gledhill Estates. Image courtesy of T&M Homes

Shovelfuls of dirt were tossed into the air Monday morning as the groundbreaking was held for Gledhill Estates, a new single-family housing development on the 7.9-acre site of the former Gledhill Nursery property on Mountain Road in West Hartford.

The project represents an investment of approximately $10 million in new housing in West Hartford, and was approved by the Town Planning and Zoning Commission in April 2017.

A crowd of about 40 were in attendance on a sunny yet cold and windy morning as representatives from Gledhill Estates LLC, West Hartford Mayor Shari Cantor, State Sen. Beth Bye, Simsbury Bank President Martin Geitz, and National Association of Homebuilders (NAHB) First Vice Chairman Greg Ugalde, donned hardhats and dug into the dirt to launch the project.

Karen Powell, whose family owned and operated Gledhill Nursery for many decades, also participated and spoke at the ceremony. 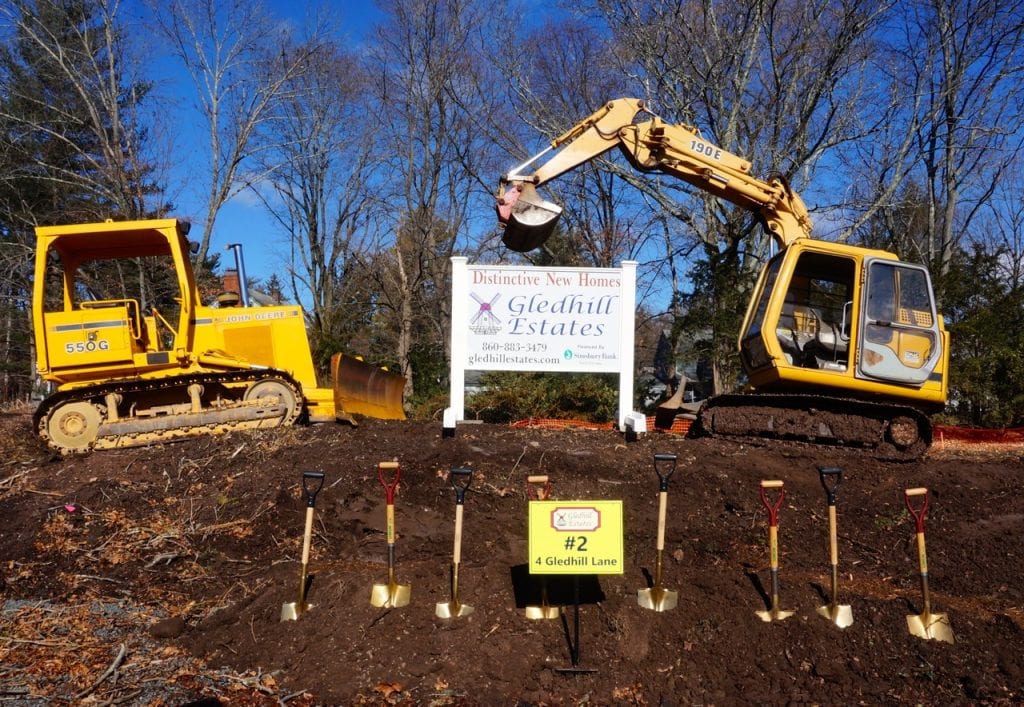 The site where the Gledhill Estates model home is about to be constructed. Photo credit: Ronni Newton

The groundbreaking took place right where construction is about to begin on the development’s model home, a 3,660 square foot “Senator” model that includes a spacious master suite, three additional bedrooms, a total of five and a half bathrooms, and a partially-finished lower level with entertainment and exercise rooms.

The town has issued the building permits and construction of the model should take about six months, said Steve Temkin of T&M Homes, who is one of the partners in Gledhill Estates LLC.

Temkin said that other than the model home, the initial work will focus on water, sewer, and drainage improvements to the site. He hopes to build to order, rather than on spec, and hopes that the project will be completely occupied by 2020.

“We’ve already had more than 30 inquiries,” Temkin said. “I am hopeful that the first family could move in sometime this year.”

“As soon as the trees went down, the phone started ringing off the hook,” said Joe Duva, sales director for T&M Builders. “It’s really the perfect location,” he said, and many people are interested in the idea of a new home in West Hartford, which is a rarity. 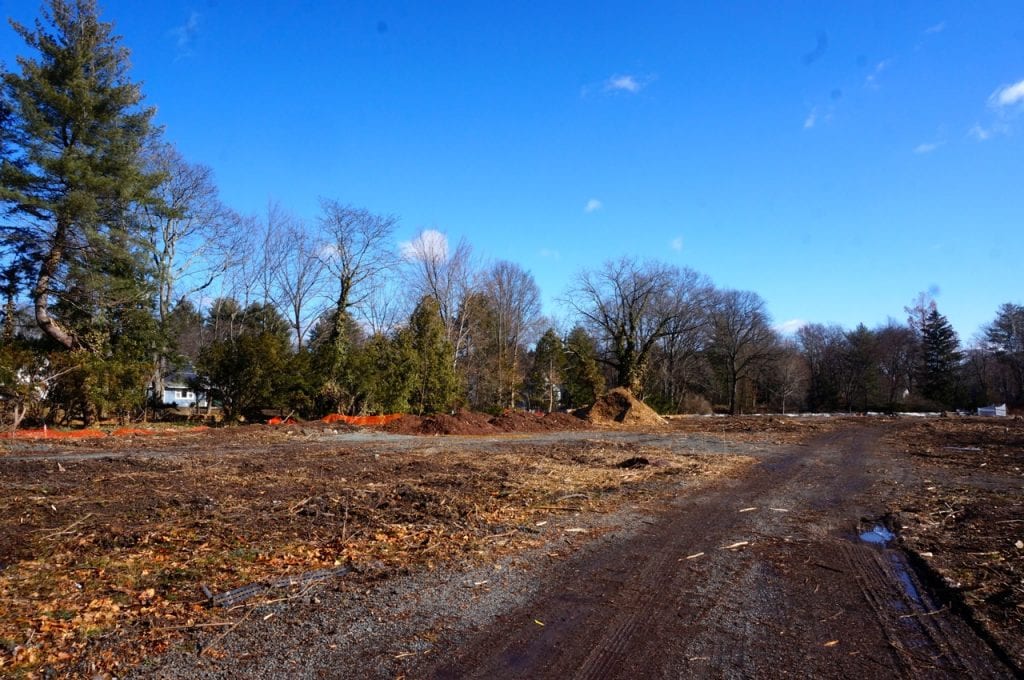 The land has already been cleared of trees in the area where the 15 new homes will be constructed, and several of the former Gledhill Nursery structures are already gone. The permit for demolition of the the 5,076 square foot garden center is in progress, according to town records.

An application to FEMA to adjust flood mapping and allow for basements in all of the properties, should be approved soon, Temkin said.

Eleven of the new homes will be free-standing, and the remaining four will be built as two-unit attached homes that are connected at the garage. There are four different home styles available, with multiple options within in each style. Homes are estimated to be priced from the upper $600,000s to the $900,000s, Temkin said. 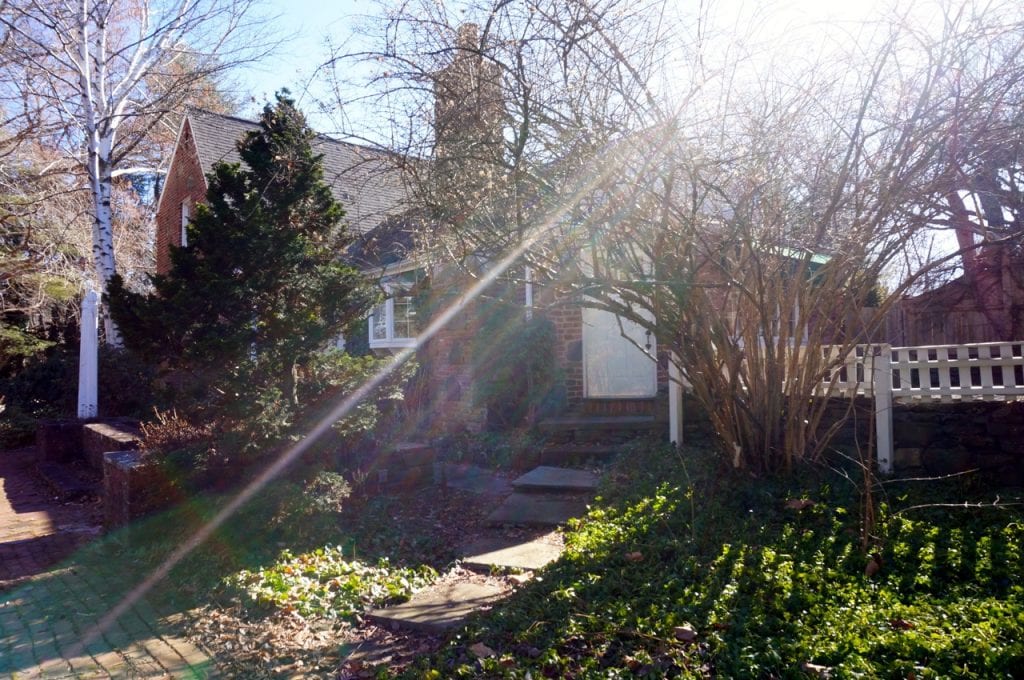 An existing 1949 cape will remain as part of the Gledhill Estates development. Photo credit: Ronni Newton

An existing cape-style home, which was built in 1949 and occupied by the Powell family until recently, will remain at the rear of the property. Duva said it may be sold “as is” or updated, depending on the demand. “It’s got a lot of character, and it will be a really private setting,” he said.

While the center of the property may look barren right now, the original trees remain all along the perimeter and the stream, shielding the development from surrounding homes. About a third of the total acreage is behind the original home, and the trees and plantings in that area have also been left intact.

An open space development makes use of a property’s unique features, which in this case includes “wetlands, exceptional natural beauty, and specimen trees,” Town Planner Todd Dumais said previously. It allows for the clustering of the homes in the development rather than requiring individual lot sizes of a certain minimum size.

As a key element of the open space development, a walking path, will wind through the woods at the rear of the property where no homes are located.

The windmill, an element on the property that was loved by many Gledhill Nursery customers and has become part of the Gledhill Estates logo, remains in place along the stream and plans are to keep it in place.

“It’s such a great option for so many people,” Cantor said. Snow removal and landscaping will be handled by the association, an advantage for many people, especially empty nesters, who no longer want the upkeep of a large property.

“Here we have a beautiful development,” Cantor said, and a rare neighborhood of new homes in West Hartford.

“I’m thrilled and so happy that Martin Geitz and Simsbury Bank continue to invest in our community,” said Cantor. 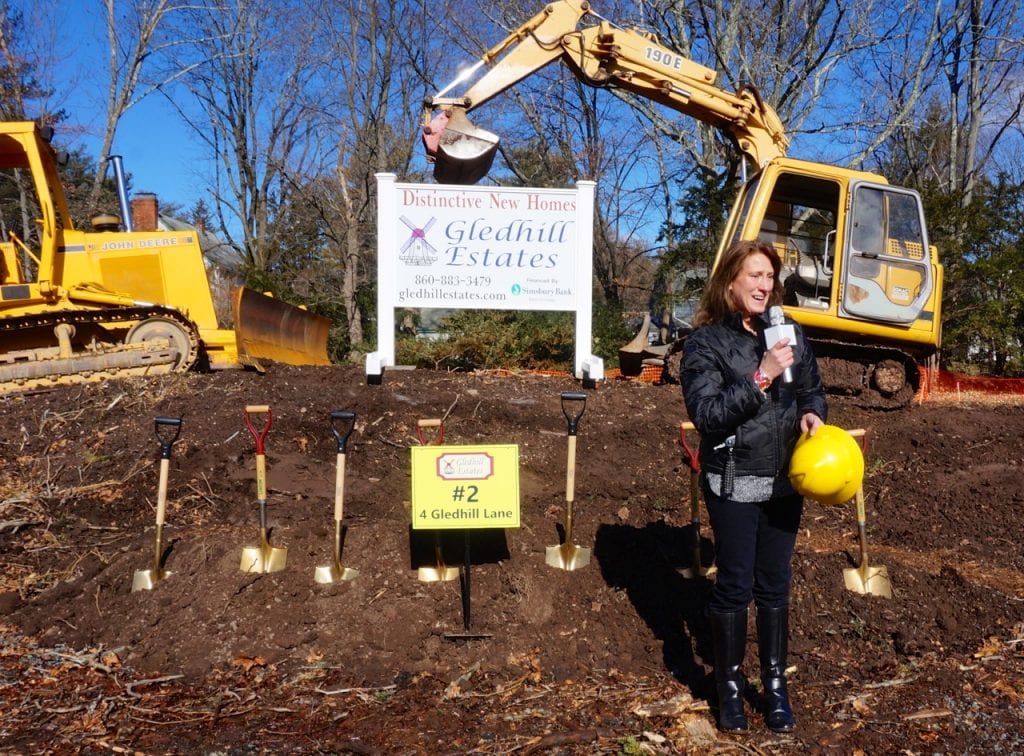 Karen Powell, whose family owned Gledhill Nursery and lived on the 660 Mountain Rd. property for decades, spoke at the groundbreaking on Feb. 5, 2018. Photo credit: Ronni Newton

“When you see a development like this it says wonderful things about the community,” said Bye. “Thank you for being here, and thank you for believing in us, Gledhill Estates.”

Geitz said that Simsbury Bank was delighted and honored to be selected to finance Gledhill Estates. “Congratulations, it sure is going to be a great project,” he said.

Powell, tearing up as she spoke, said, “This is a very emotional day, a good day.” She said her family had lived on the property since the mid-1970s.

“Thank you to all, and it’s on to the next phase,” Powell said.

For more information about Gledhill Estates, visit the website. 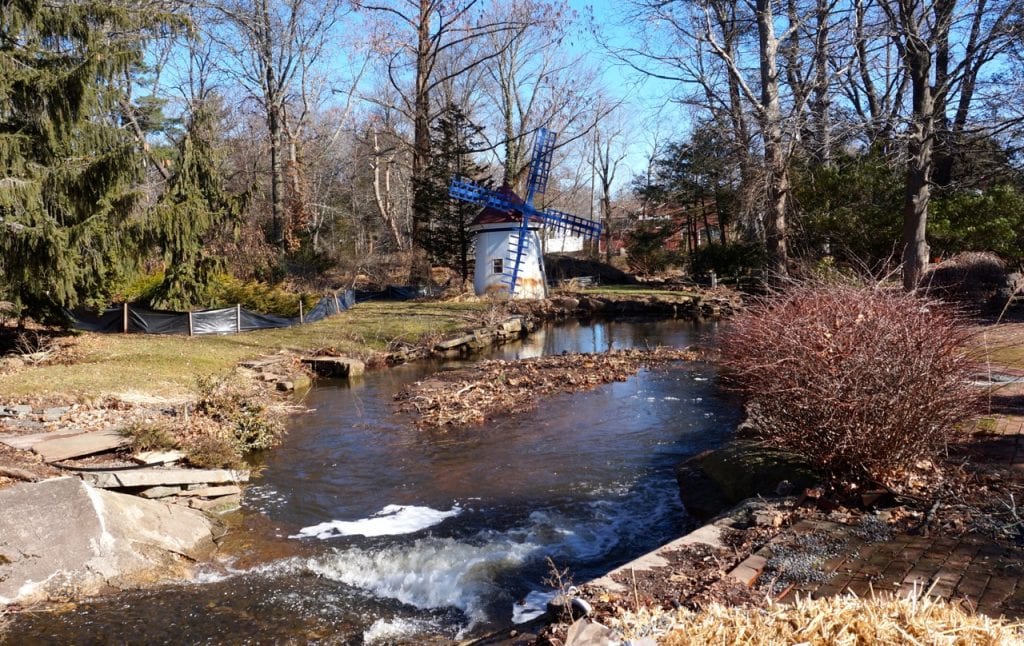 The historic windmill, which originally sat atop the entrance to the Dutchland Farms Restaurant in Bishops Corner and was moved to Gledhill Nursery in the 1950s, remains on the Gledhill Estates property and has become part of the company logo. Photo credit: Ronni Newton 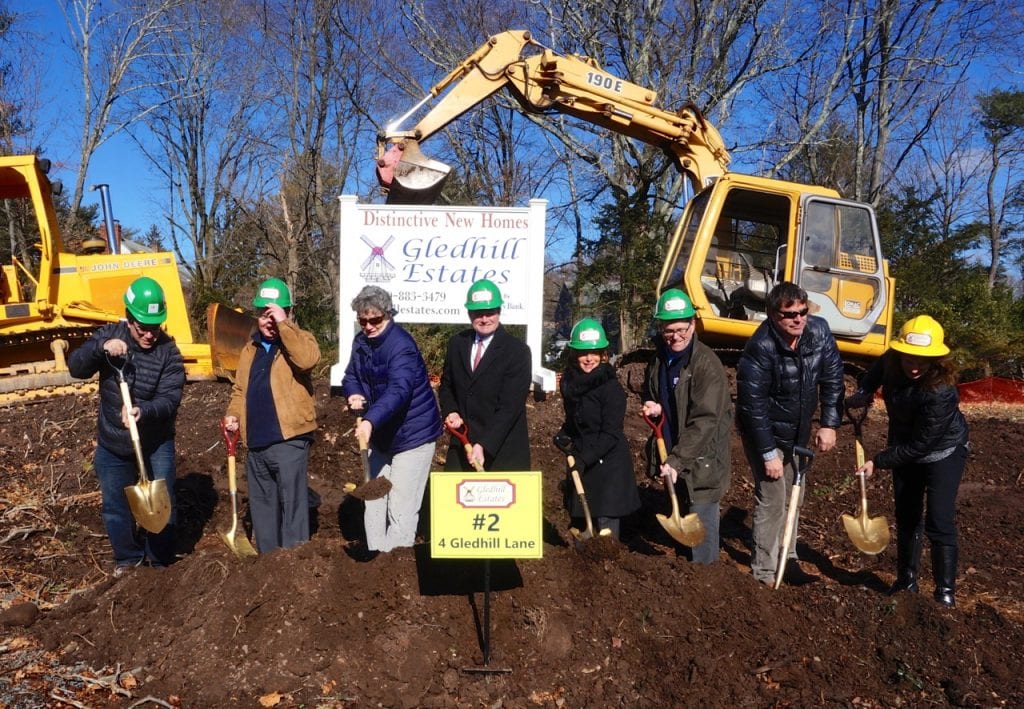 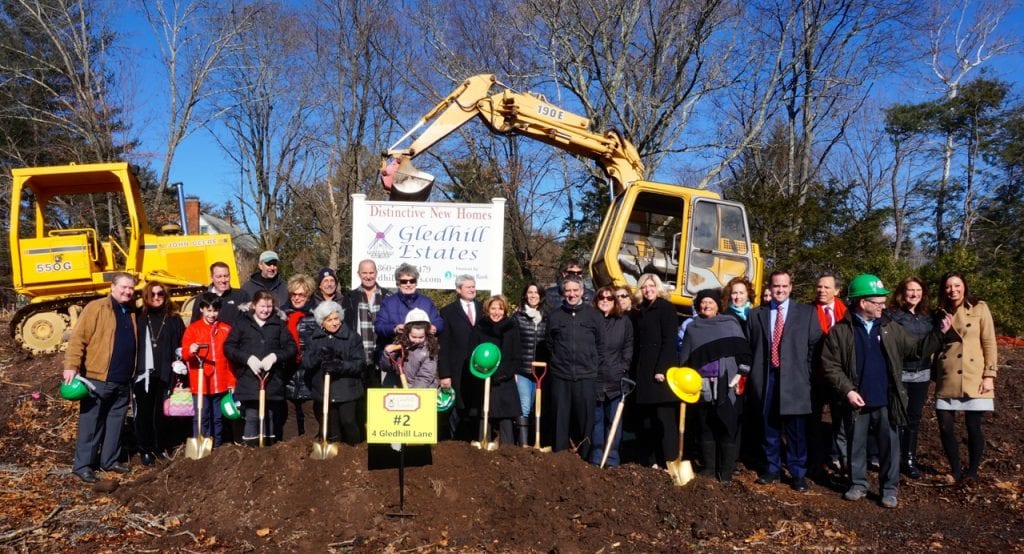 Family and friends gather for a group photo after the groundbreaking for Gledhill Estates on Feb. 5, 2018. Photo credit: Ronni Newton 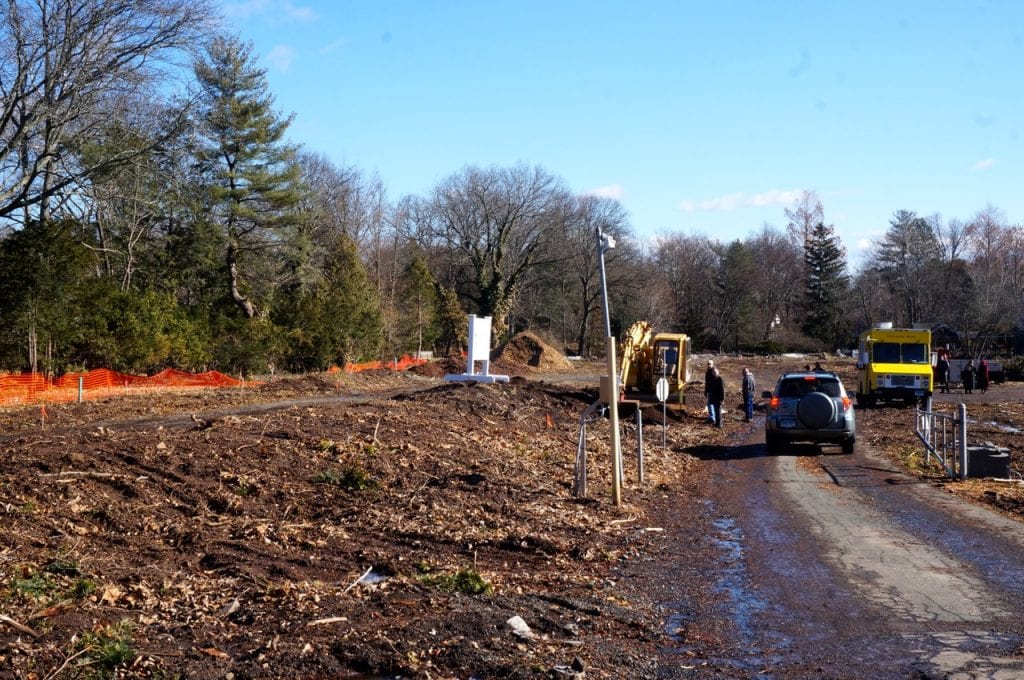 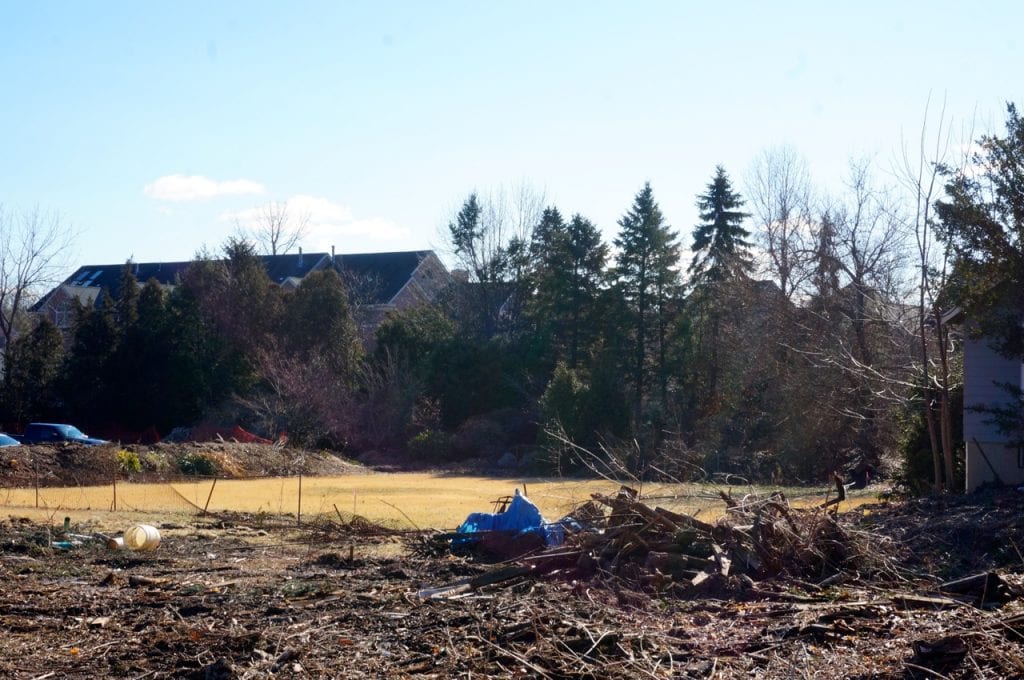 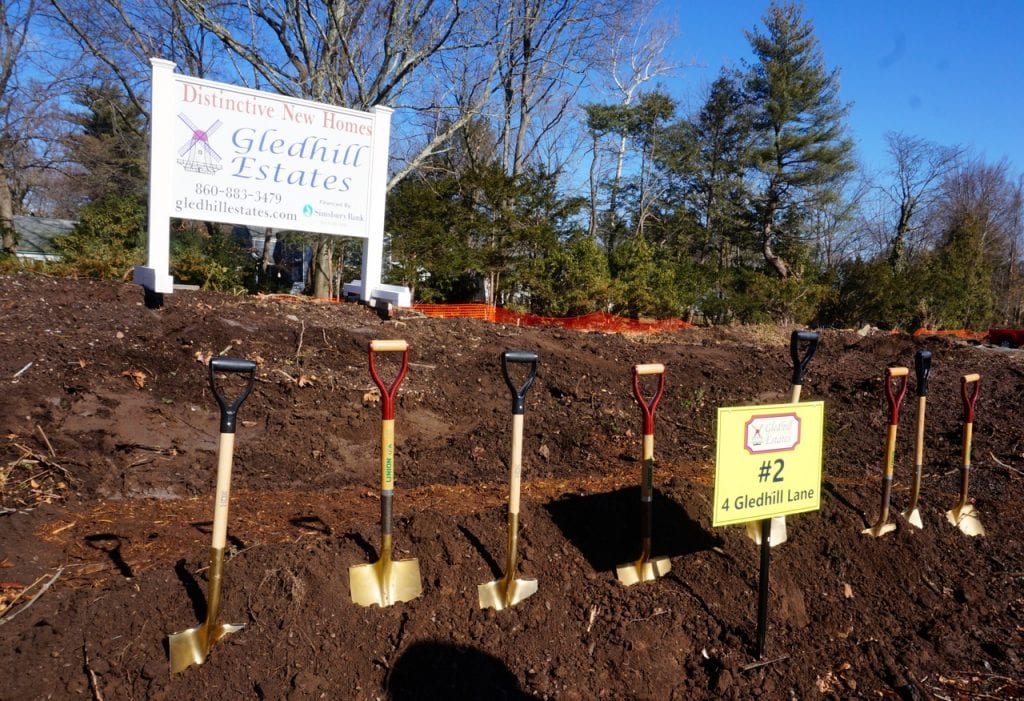 The site where the Gledhill Estates model home is about to be constructed. Photo credit: Ronni Newton 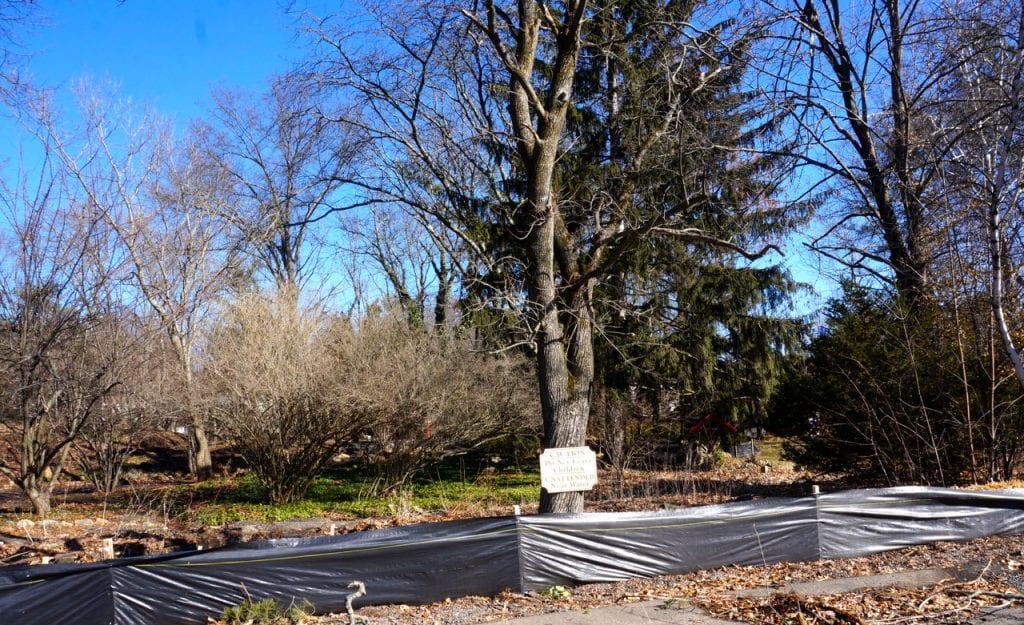 Original trees remain along the stream and the perimeter of what is now Gledhill Estates. Photo credit: Ronni Newton 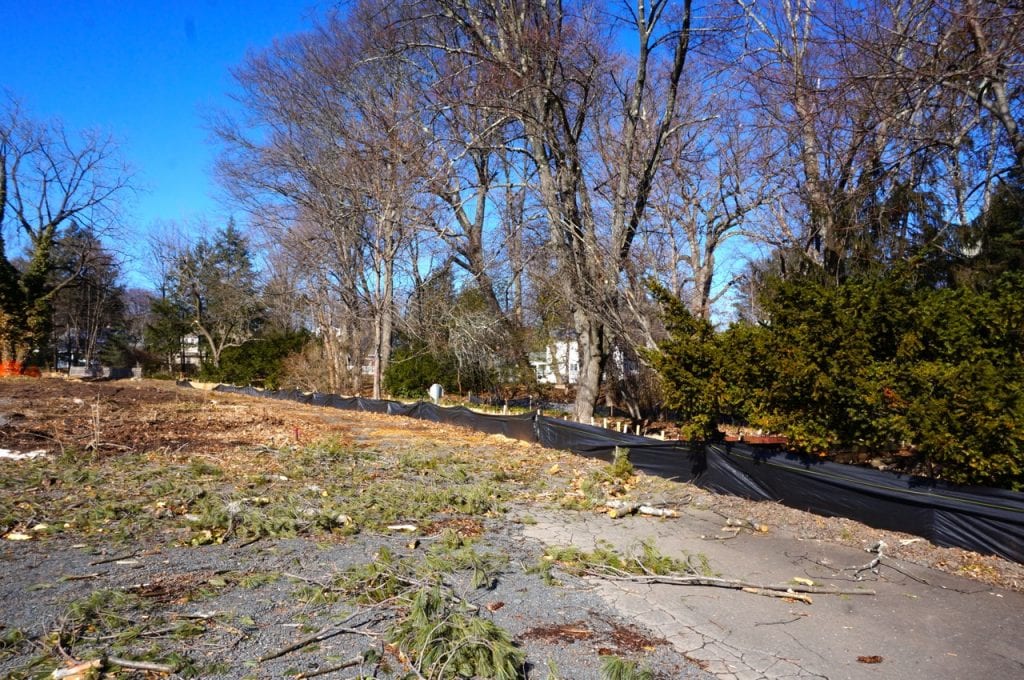 Trees remain along the side of the cleared portion of Gledhill Estates property looking west toward mountain road. 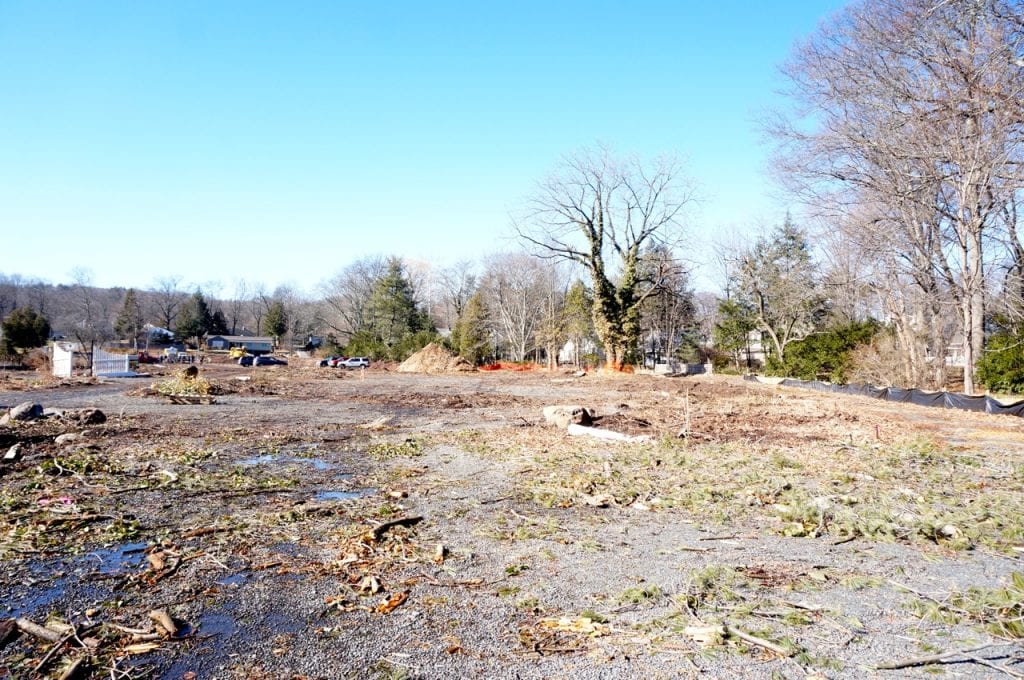