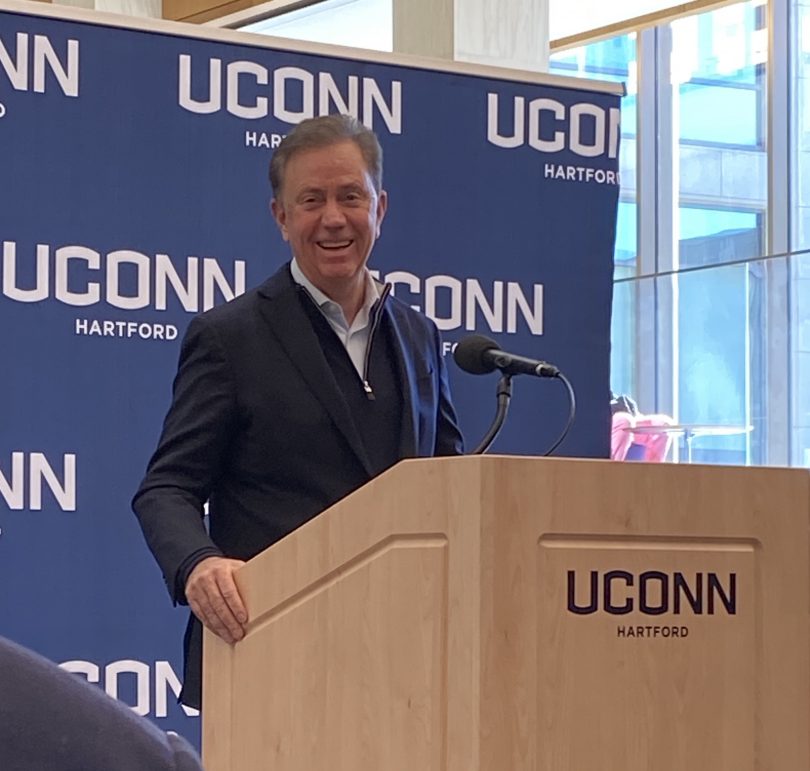 Gov. Ned Lamont talks about the ties between Connecticut and Israel as he prepares to visit the Start-Up Nation, along with a local contingent that includes CT Innovations Chair Michael Cantor of West Hartford, to meet with leaders of innovative Israeli companies seeking to expand in the U.S. 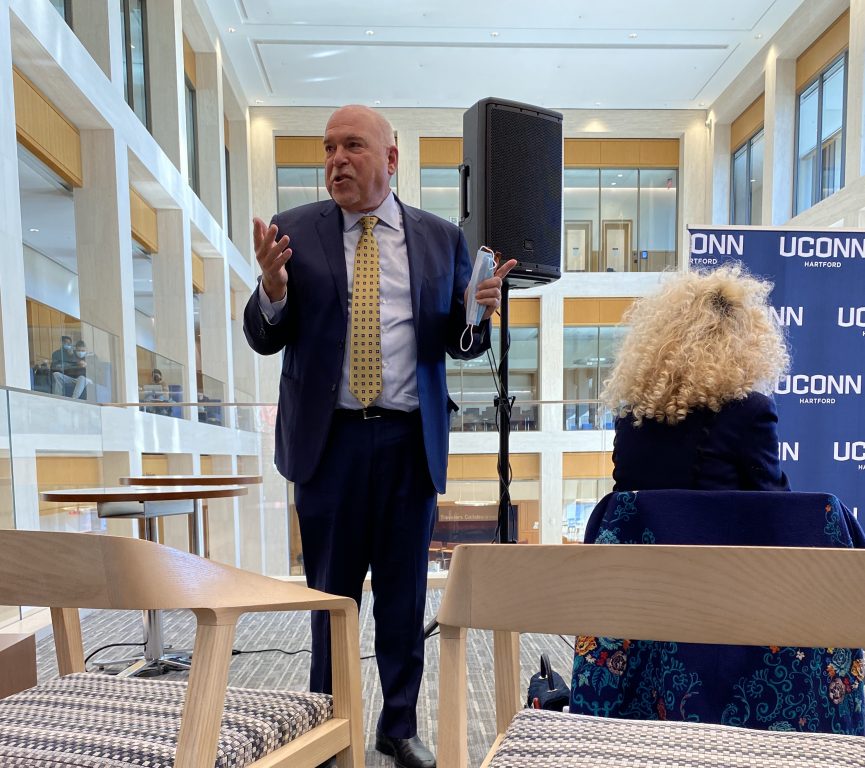 Michael Cantor of West Hartford, chair of CT Innovations, will accompany Gov. Ned Lamont and other public and private sector leaders on a trip to Israel. Courtesy photo

It was supposed to happen in the year 2020. But then COVID hit and, well, you know the drill. Along with so many other private and public events, Gov. Ned Lamont’s long anticipated visit to the State of Israel was postponed indefinitely.

Fast forward two years and, with the ban on travel lifted, the long-awaited trip is back on.

Now, on Thursday morning, Feb. 17, the governor will embark on a weeklong trip to the Start-Up Nation that will focus on strengthening connections between the Jewish state and members of Israel’s innovation ecosystem, including venture capitalists, incubators, accelerators, and thought leaders.

The visit will draw to a close on Feb. 24 with a VentureClash event, led by Connecticut Innovations, the state’s venture capital arm. The event will include pitches from innovative companies seeking to expand in the U.S. who also have a compelling reason to come to Connecticut.

In addition to meeting with business leaders, Lamont is also scheduled to meet with several Israeli government officials.

“Part of growing Connecticut’s innovation ecosystem includes adding diverse businesses from all around the world,” Lamont said in announcing the upcoming trip on Tuesday morning. “Israel continues to lead the way in innovation and has one of the strongest economies in the world to back it up. This is an opportunity for Connecticut to bolster its ties with Israel and provide these innovative companies with an option for any U.S. expansion. I look forward to meeting with these business leaders and government officials to learn how we can strengthen the bond between our two regions.”

David Lehman, Commissioner of the Department of Economic and Community Development, who will also be part of the Connecticut delegation, noted that, “While in Israel, we will be spending time with some of the brightest minds in the small business ecosystem. We hope to carry home best practices on how we can work more closely with Israel to provide startups with a soft landing when they arrive in our state.”

“As an important part of our global recruiting strategy, we will meet with innovative companies looking to create a US headquarters in Connecticut,” said Matt McCooe, CEO of Connecticut Innovations.

“Through VentureClash, we not only have the opportunity to connect with promising companies, but also we will expand and strengthen our network of co-investors who will work on future deals with Connecticut Innovations.” 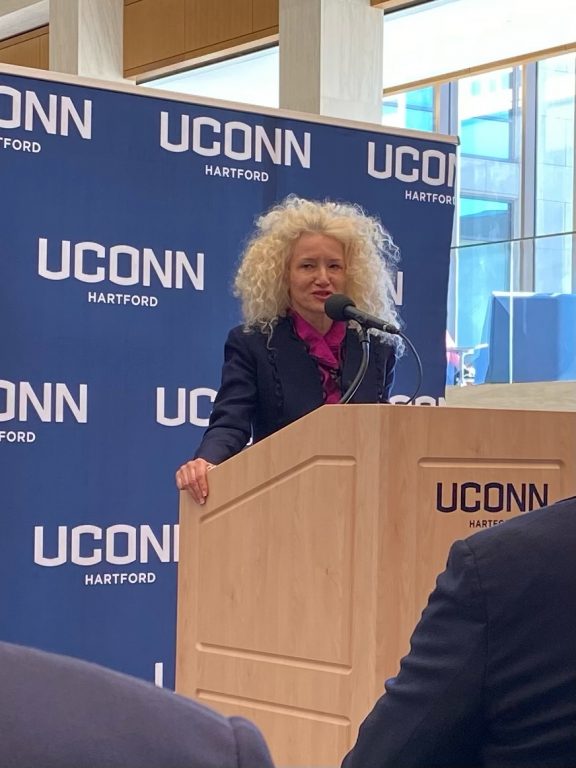 As Lamont prepared to leave, he took time to speak with the Southern New England Jewish Ledger about his upcoming trip, and other issues of concern to Connecticut’s Jewish community.

SOUTHERN NEW ENGLAND JL: After putting this trip on hold for two years, it must feel good to finally be taking off.

GOVERNOR NED LAMONT:  You know, we’ve been trying to go for a couple of years but COVID had gotten in the way of our plans. Now, we’re ready to go – as long as nobody invades Ukraine on Thursday. But otherwise…

We’re taking an overnight flight that leaves Thursday night out of JFK, arriving Friday, midday. We’ll spend Saturday “recovering” from the trip and then we’re going to spend a lot of time out and about – you know, just visiting informally. Then the real work will begin on Sunday and tun through Thursday, when we return home.

Have you been to Israel before or is this your first trip?

I’ve been a number of times. This time I wanted to go with some of the leaders of our business community. And I wanted to remind Israeli entrepreneurs and business leaders that we’re going to be meeting with them; that Connecticut has a very close relationship with the entrepreneurial community in Israel; and that Connecticut innovations is going to be with us and they’re bringing millions of dollars to invest in Israeli startups. We hope that a lot of those startups, when they think about getting a foothold in the United States, think about Connecticut.

Michael Cantor, who is the chairman of Connecticut Innovations, is also coming with us. And, obviously, UConn has a close relationship on the academic level with their counterparts and helping with the startups. So that’s happening as well.

You mentioned that you’ve been to Israel before. When? And what were our impressions?

Oh, gosh, I think the first time was probably 15-plus years ago. There’s a business group called YPO – Young Presidents Organization – and so I went to Israel sort of sponsored by them. AIPAC, set up the meetings with all the young business leaders. For me, it’s a great way to travel and learn – to see my business counterparts and what their experiences are. I didn’t go on that trip on behalf of Connecticut or anything like that. I was just going as someone interested in the entrepreneurial culture in Israel.

Will you be meeting this time with any government leaders?

Yes. I’m scheduled to meet with the Prime Minister, as well as with the foreign minister. We plan on hosting a really nice reception for all the business leaders and, I hope, with our Ambassador to Israel, Tom Nides, who’s an old friend of mine and stands toe to toe with the CFO of Google. So we’ve got a good team put together.

Switching gears, the Jewish community is alarmed by the rising tide of antisemitism. Recent events – such as the hostage taking at a Texas synagogue – as well as the frightening rise in antisemitic incidents throughout the country, have made the American Jewish community very apprehensive. Can you talk about what’s been done in Connecticut to increase security at Jewish institutions and quell those fears?

Yes, there’s been an increase in hate crimes and an increase in antisemitic crimes. What we really want to do is to make sure that people can worship safely. And so, we’ve allocated millions of dollars to increase security at religious institutions, because people need to know that they can worship safely. We hope to be building on that [security funding] and next week I’ll be going to Yad Vashem [The World Holocaust Remembrance Center located in Jerusalem], and I’ll be able to talk a little more about some of the security initiatives we have in place.

You know, the strength of Connecticut, the strength of America, is our respect for each other, regardless of race. color, creed. And that starts with the Jewish faith and doing everything I can to make sure that everyone can worship safely.

We’re finding that the stress that’s been created by the COVID pandemic the last couple of years has manifested in a lot of different ways. Sadly, it’s led to domestic abuse, drug addiction, suicide, and some flare ups of violence in and around our schools, and also in terms of hate crimes. We just have zero tolerance for that. And that’s what we’re gonna say loud and clear.

When you’re back in Connecticut, we’d love to hear about your trip – your impressions and what was accomplished.

I’ve got to tell you, I’m really pleased that the very first diplomatic mission that I’m on is going to Israel. We’ve got an amazing delegation that’s going with us – you know, people like David Lehman, [JFACT executive director] Michael Bloom, Michael Cantor, the Chairman of Connecticut Innovations, people from Raytheon, Lockheed, and others.

I especially love Israel’s entrepreneurial culture. Israel and Connecticut are a great fit. I’m really so flattered that the government of Israel is rolling out the carpet for us and giving us access to the most senior people in government and business.

I’d love to talk with you about our experience when I return.

A version of this story was originally published Feb. 15 on Ledger Online/Southern New England Jewish Ledger.