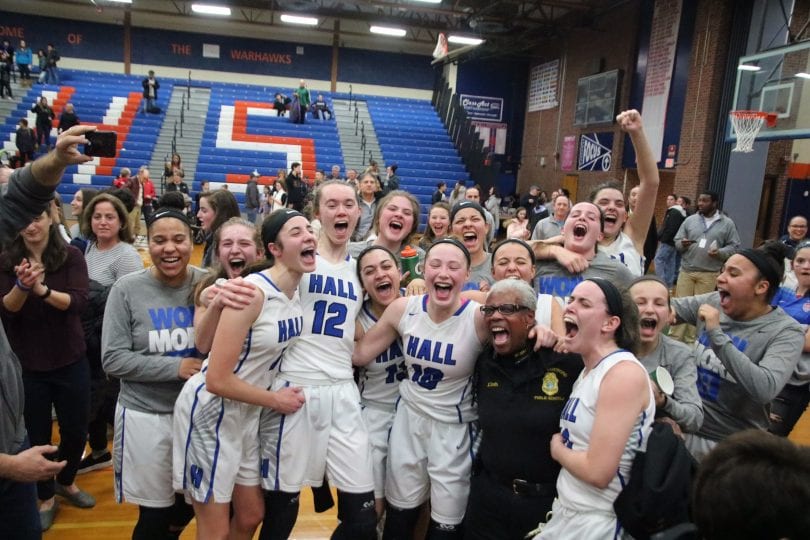 Hall girls basketball is one win away from a state championship after defeating Enfield in the CIAC Class LL semifinals.

Olivia Bonee will not receive her diploma from Hall High School in West Hartford until June 2020, but she played like a senior to keep the Warriors’ season alive on Friday night in Bloomfield.

Tied at 53 with 19 seconds remaining in overtime, Lexi Gellerman drove to the hoop and found Bonee for a game-winning 3-pointer to lift the Warriors past No. 8 Enfield 56-54 in the CIAC Class LL semifinals.

Although Bonee was tied for third on her team with nine points, all of them were from beyond the arc, none more crucial than her last three. Her confidence to make that type of shot was there all night, Bonee said, even if the shots were not falling earlier.

Down 56-53, Caterina Fonseca made a free throw to bring Enfield within two with 7.3 seconds left. The Eagles missed a runner on the final possession of the game to try to force a second overtime, keeping the Warriors’ quest for a state title alive.

The Warriors also take the season series against the Eagles, which included a 50-42 win in the Enfield Tournament championship game on Dec. 29 and a 60-49 loss in the CCC Tournament final on Feb. 22.

“They don’t give up,” Hall head coach Brittany Huggins said of her team. “They take on challenges. At halftime, I said to them, ‘They want it more than you. You gotta act like you want it a little bit more than them.’ … Down [16] points, they could have said ‘okay,’ but they didn’t. Shout-out to them for really sticking with it and doing what we were asking them to do.”

The Warriors battled back from a 17-1 deficit in the first quarter, as Enfield senior Mary Baskerville started the game on an 11-0 run with layup after layup. Shortly after, Fonseca got on the score sheet as she notched Enfield’s last six points of the quarter.

Siobhan Boyle put Hall on the board first with a free throw at the 2:25 mark, and Raisner made a layup with 33 seconds remaining to bring the score to 17-3 to end the first frame.

Hall’s offense began to take shape in the second while Baskerville sat more than half of the quarter for Enfield.  Raisner, Gellerman, and Jenna Zydanowicz all found their way to the paint for layups – with or without the 6-foot-3 Baskerville in the way.

The Warriors trimmed the deficit to 11 in the second quarter, trailing 25-14 at halftime.

Bonee made a 3-pointer with 2:32 remaining in regulation to draw Hall within one. With 1:58 left, Rainser made a layup to give the Warriors their first lead of the game, 45-44.

Tied at 47, Raisner once again put the Warriors ahead on a contested layup with 18 seconds on the clock.

Baskerville made a layup to tie the game at 49 apiece and force overtime with seven seconds left the way she scored many of her game-high 27 points – catching an overhead lob into the paint where she laid the ball off the backboard and in – but the Warriors held on in overtime for the victory.

Raisner and Gellerman led the way for Hall with 15 and 14 points, respectively. Fonseca added 17 for Enfield.

With the win, Hall heads to the state championship game next weekend to take on No 2. Mercy at Mohegan Sun Arena.

“This is it, center stage. It’s going to be fun,” Huggins said. 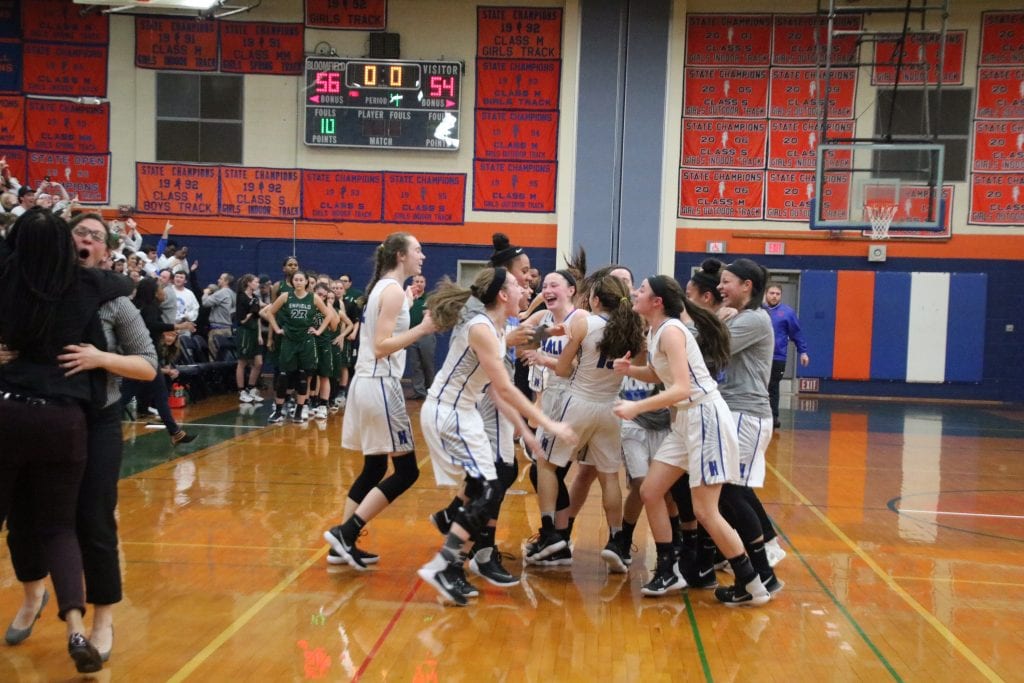 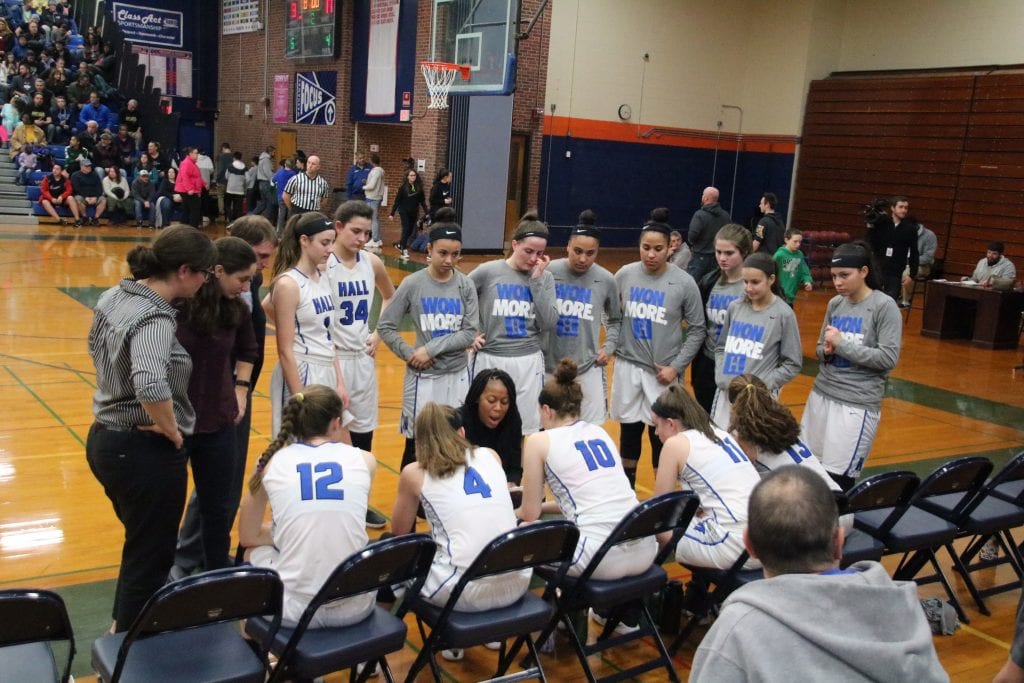 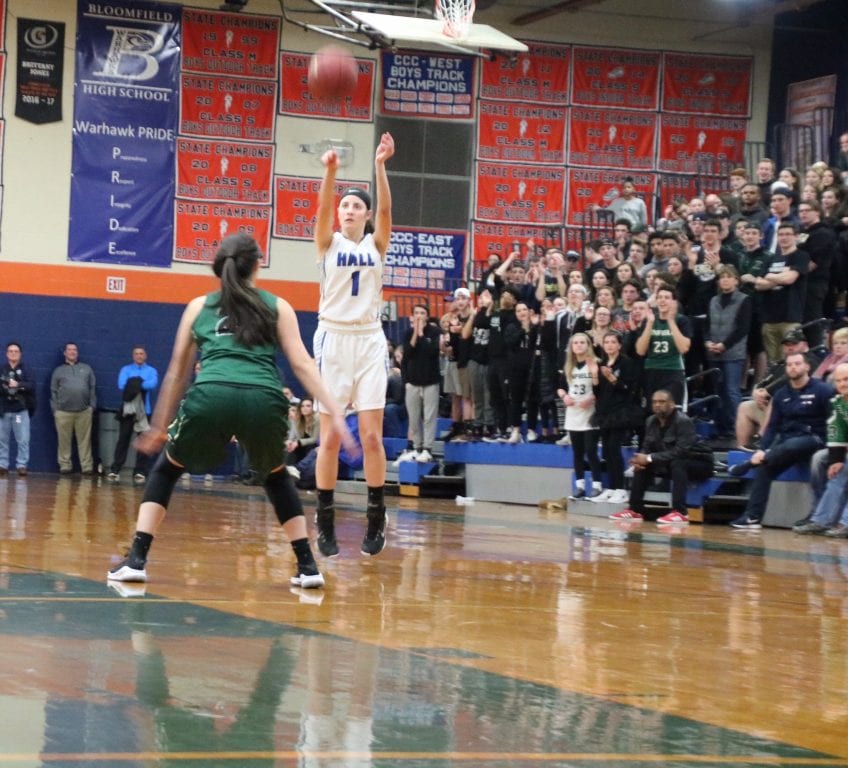 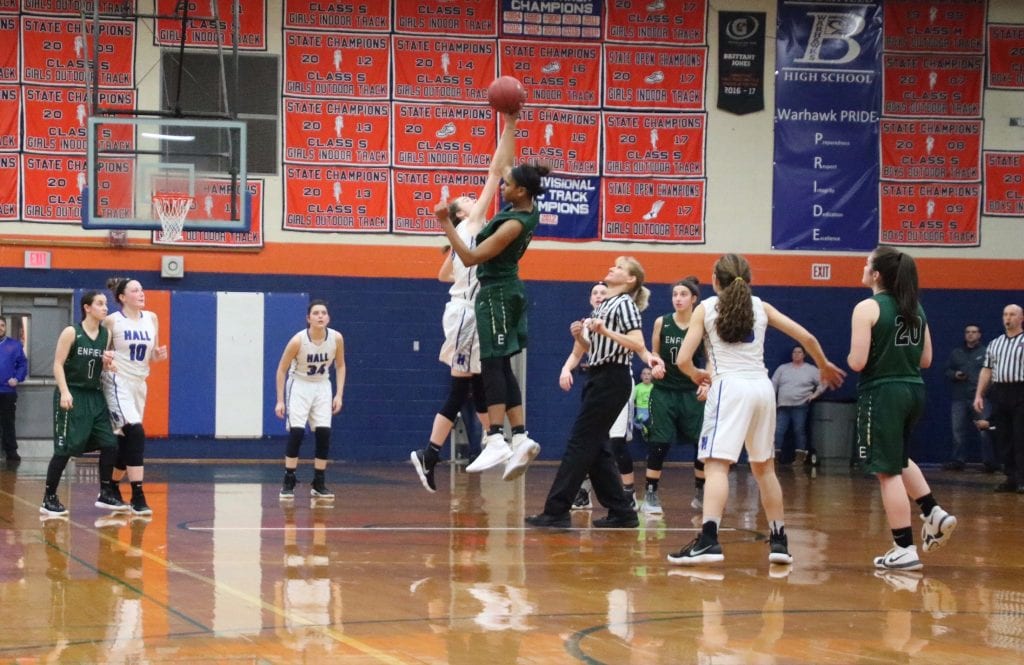 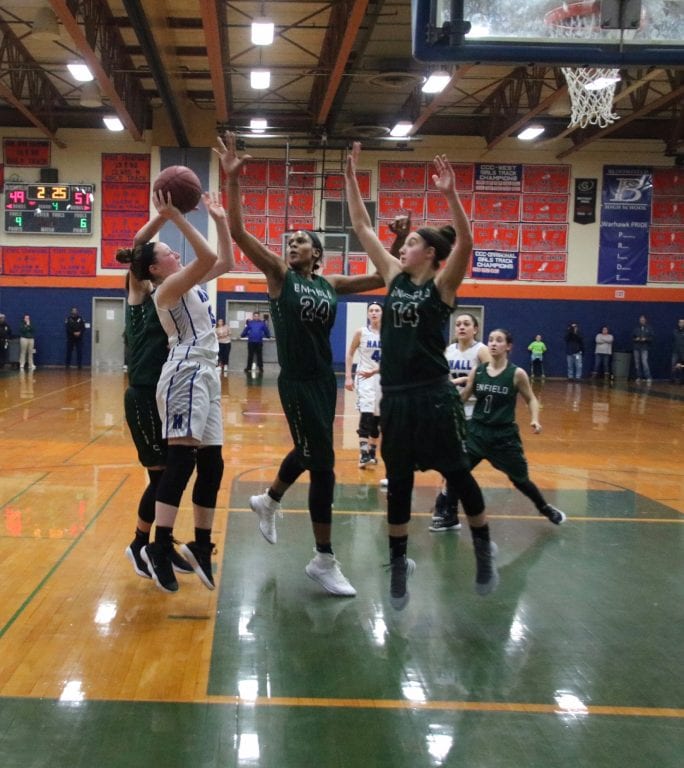 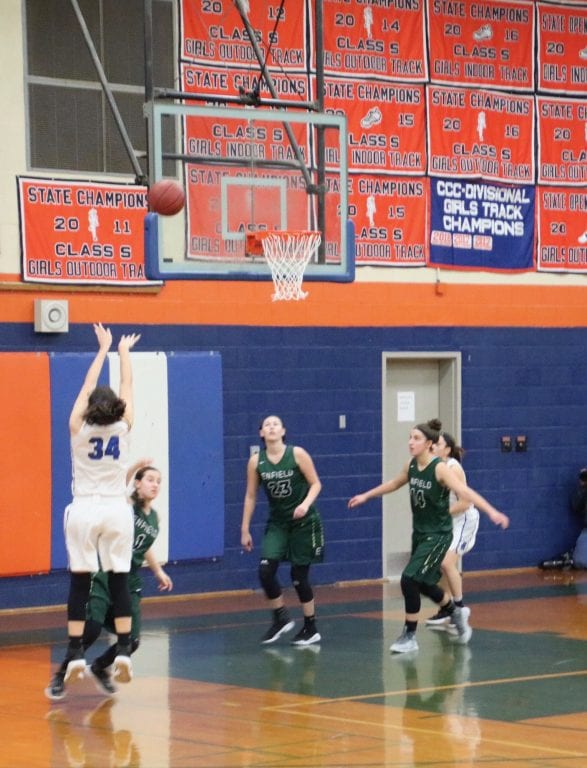 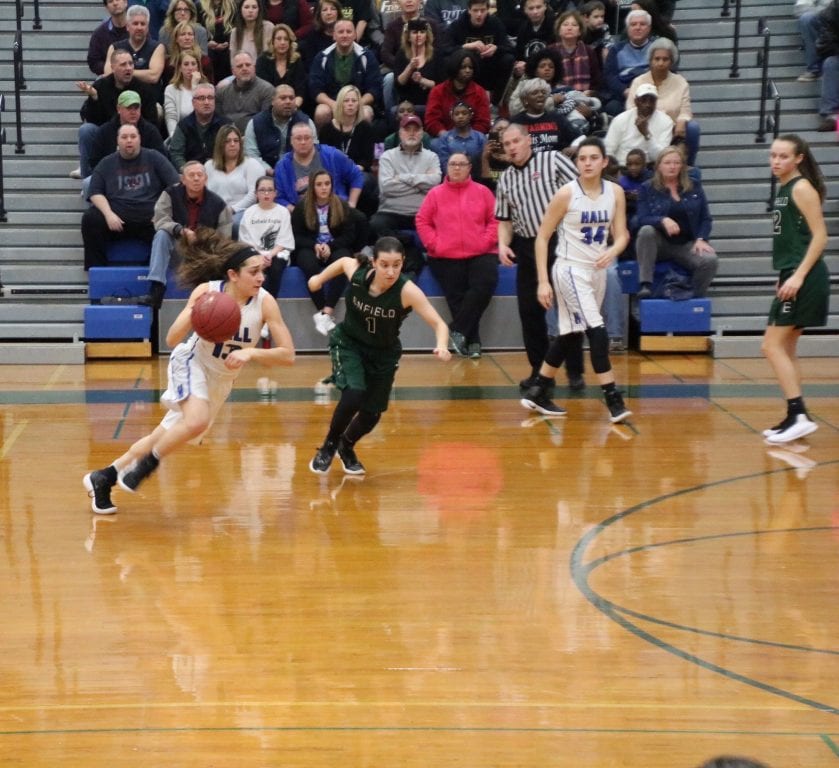 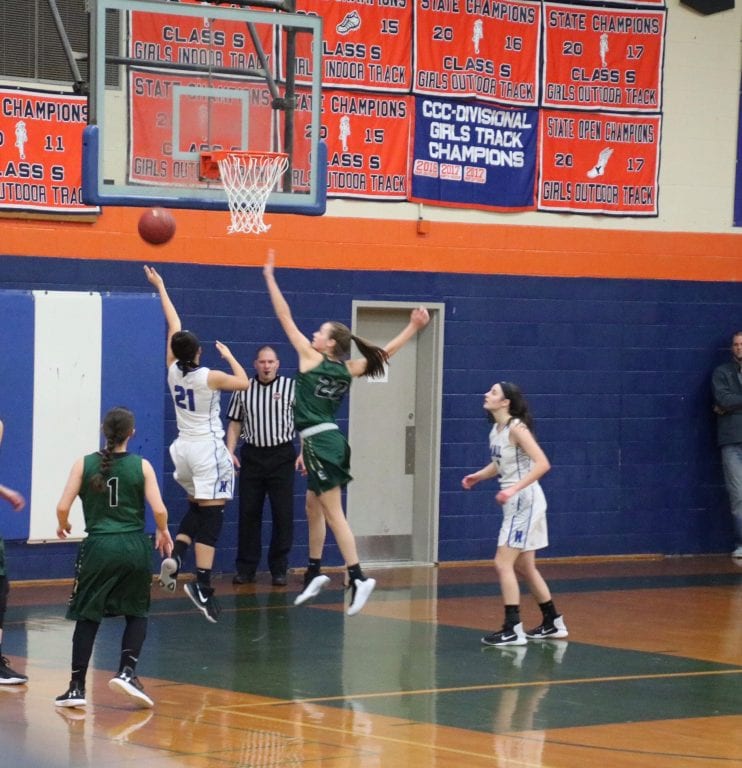