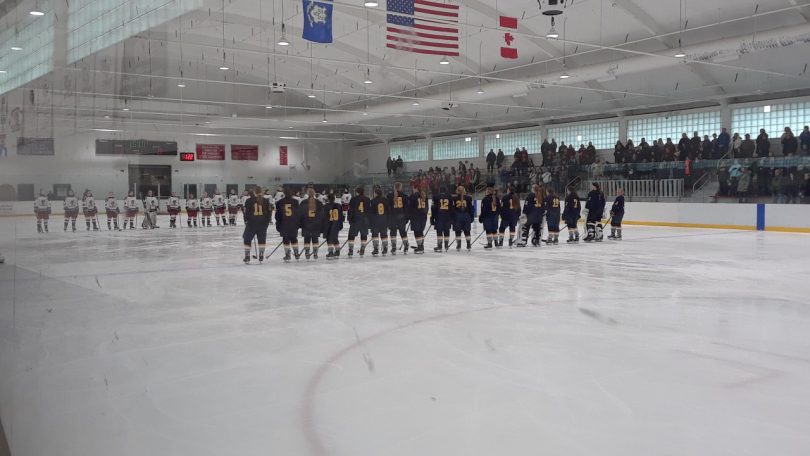 The WarChiefs couldn’t rally from a 3-goal deficit, falling to the Trojans in the girls hockey state tournament quarterfinals Saturday afternoon.

After a scoreless first period, the Trojans jumped out to a 3-0 lead less than five minutes into the second. Grace Melanson sent home a rebound 38 seconds into the middle frame. Nicole Loftus found the puck amongst a scrum of players in the crease to score with 11:32 remaining, while Mackenzie Chapman fired the puck to the top of the net on the rush near the 10-minute mark.

The WarChiefs called a timeout after Simsbury’s third goal and found the net themselves minutes later. Rose McGowan scored to cut the margin down to two with 5:52 left in the second period, but the WarChiefs failed to draw closer.

Despite playing more aggressively in the third period hoping to mount a comeback, Hall-Conard couldn’t convert its scoring chances. Simsbury took advantage of Hall-Conard’s aggression and created opportunities to score on the rush off turnovers.

Chapman scored again for the Trojans with 5:58 to play, and Melanson added an empty net goal at the 1:52 mark to seal the win.

“Both teams were hungry, obviously, being [in] the quarterfinal of the state tournament,” said Hall-Conard head coach Brett Soucy. “I thought we had a good start and we, overall, played well. … They got three quick ones on us and then we did respond and get the next goal, so that’s a big thing for a team just not to give up.

“We fought right to the end. That’s all we can ask of them.”

The WarChiefs (18-5) held a 2-1 edge in the series entering Saturday. Hall-Conard beat Simsbury (18-4-1) in both regular season contests, but the Trojans beat the WarChiefs in the Southern Connecticut Conference North Division Championship on Feb. 22.

“Playing a team the fourth time is tough, but any team we played (in the state tournament), I would expect to be a tough game,” he said.

Soucy said his 10 seniors have left a positive mark on the program and hopefully “sent the message along to our underclassmen” as the team looks to build on its success next season.

“We want to just continue building upon the good things we have going here and just keep improving year to year, but we’re certainly going to miss our seniors because they were a huge part of our team,” said Soucy.