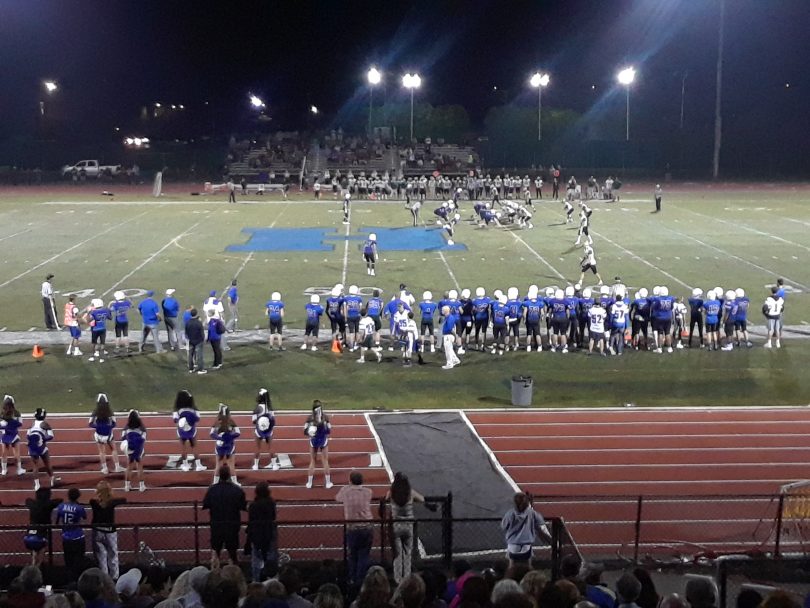 The Warriors could not hold a slim lead long enough to come away with a win in their home opener.

The Warriors led the Eagles on the scoreboard for almost 28 minutes, but it was 19 seconds too short as the Hall High School football team fell to Enfield, 12-10, in its home opener Friday night at Chalmers Stadium in West Hartford.

Enfield quarterback Cody Stager found Wyatt Raymond – a receiver he targeted for most of the game – in the corner of the end zone for an 8-yard, go-ahead touchdown pass with 19.3 seconds left in the fourth quarter to give the Eagles a 12-10 advantage.

The Warriors returned the ensuing kickoff to their own 45, but a rushing attempt with nine seconds remaining barely advanced the ball past midfield as time expired.

“It’s a long game – it doesn’t come down to one play,” said Hall head coach Frank Robinson. “Their kid just made a great play. It was a great ball, but there were so many plays prior to that that we could have done a better job on.”

While much of the game was a defensive struggle between the Warriors and Eagles, Enfield drove from their own 21-yard line in the final three minutes. Stager completed passes to Brendan DeBarber and Joel Stewart for 29 and 13 yards, respectively, to keep the comeback effort alive.

As the Eagles approached the red zone, Cody Stager and running back Tallon Stager ran the ball to wear down Hall’s defense. Cody Stager gained six yards on a 4th-and-1 from the 14-yard line with about 30 seconds left to set up the late touchdown pass.

Hall’s offense was stymied in the second half, as the Warriors failed to record a first down in the final 24 minutes of play. The Warriors punted on four of their five second-half possessions, leaving Enfield within striking distance.

Hall’s defense, however, was able to keep Enfield off the board for most of the game and create turnovers on a fumble recovery and a blocked punt.

After a scoreless first quarter, Enfield took a 6-0 lead after Cody Stager ran in a 4-yard touchdown with 4:59 remaining before the half.

The Warriors wasted no time responding, however.

Hall quarterback Matt Keller connected with Jack McHale for 59 yards, setting up a 1st-and-goal at Enfield’s 4-yard line. Nolan Tibball finished the drive with a rushing touchdown on the ensuing play, and the Warriors made the extra point to take a 7-6 lead with 4:18 remaining in the second quarter.

Hall recovered a fumble on Enfield’s 35-yard line to get the ball back with 3:15 left in the half. Noe Ruelas capped off the short drive with a 39-yard field goal, creating a 10-6 cushion for the Warriors at the 1:27 mark. Enfield drove all the way to Hall’s 13-yard line but failed to score before the half.

The Warriors opened the second half with a successful onside kick, but a holding penalty stalled the drive and eventually forced them to punt.

Hall blocked an Enfield punt on the ensuing drive and recovered the ball on the Eagles’ 29. The Warriors came up empty again, however, as they failed to convert a 4th-and-11 from the 30.

On an emotional evening for both sides, members of the Hall and Enfield football communities who passed away recently were honored before the game:

Enfield players displayed memorials for Brady on their sideline during the game, including one with his No. 71 jersey on it.

“It’s really tough, but I think some of this bonds everybody together,” said Robinson. “It’s great to have teammates that can help you out.”

After winning their season opener at Simsbury last week and notching Robinson’s 100th win as Hall head coach, the Warriors fall to 1-1, while the Eagles improve to 2-0.

Hall will travel to Glastonbury (1-1) on Friday night to take on the Tomahawks at 7 p.m.