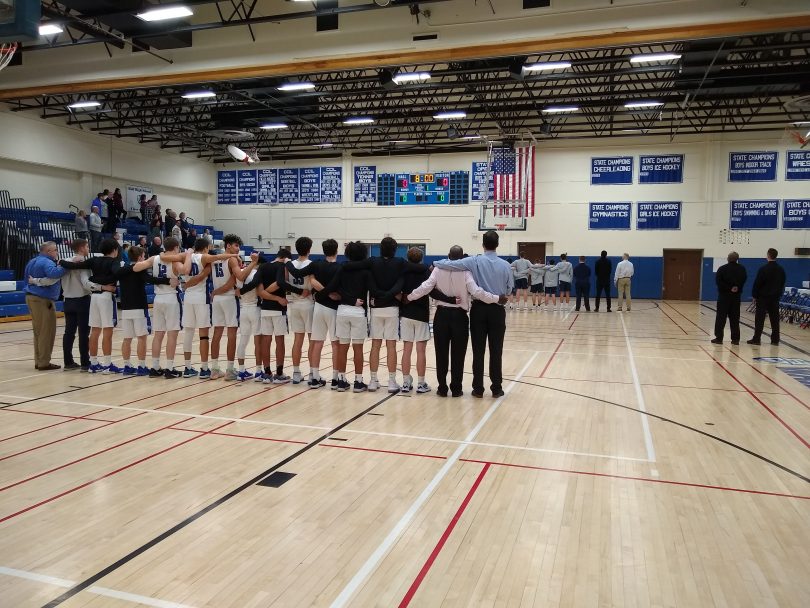 Amid a five-game homestand, the Warriors defeated RHAM to earn their third win of the season.

The Sachems (7-7) scored the first basket of the game, but Matt Walker answered with a 3-pointer at the 6:24 mark in the first quarter, and the Warriors (3-10) never trailed after that point.

Will Fox scored a game-high 15 points for Hall, while Walker added 12. Brenden Duprey and Alex Banas led RHAM with 14 points. Nate Bellhorn chipped in 12 for the Sachems.

“Obviously, just happy to get a win. Simple as that,” said Hall head coach Bryan Moretti. “I thought the guys started well. They have kept it together through losing a lot of games. They’ve kept it together and they’ve worked hard, and we continued to get better. That’s all you can ask for, especially when you’re struggling like we’ve been struggling.”

Moretti said the offensive game plan was to attack Banas, RHAM’s big man listed on the roster at 6-foot-8.

“Going at [Banas], offensively going, attacking him.” Moretti said. “Whoever had [Banas], that guy was very active. That guy was setting a lot of screens. That guy was making him move, getting away from just standing inside. That’s what I wanted to do against Bulkeley. We just didn’t do it.”

Both teams struggled shooting in the first quarter, but the Warriors led 10-5 after one.

The offense picked up in the second, as Hall spread the floor and went on small runs to extend the lead. RHAM drew the game within one, 16-15, but the Warriors outscored the Sachems 15-7 over the last 4:24 of the half to take a 31-22 lead at the break.

The Warriors kept the Sachems at bay in the fourth, going into the bonus ahead 57-46 under the two-minute mark and allowed just five points down the stretch.

“The goal is [to] try to win games … and keep getting better non-stop,” Moretti said. “That’s all we can do. We’ve got a lot of young guys coming back, so we’re just excited to keep them together for the rest of the season and into next year.”