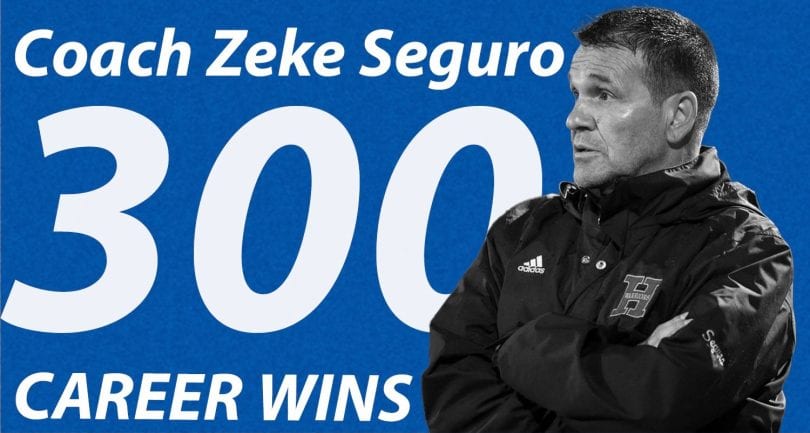 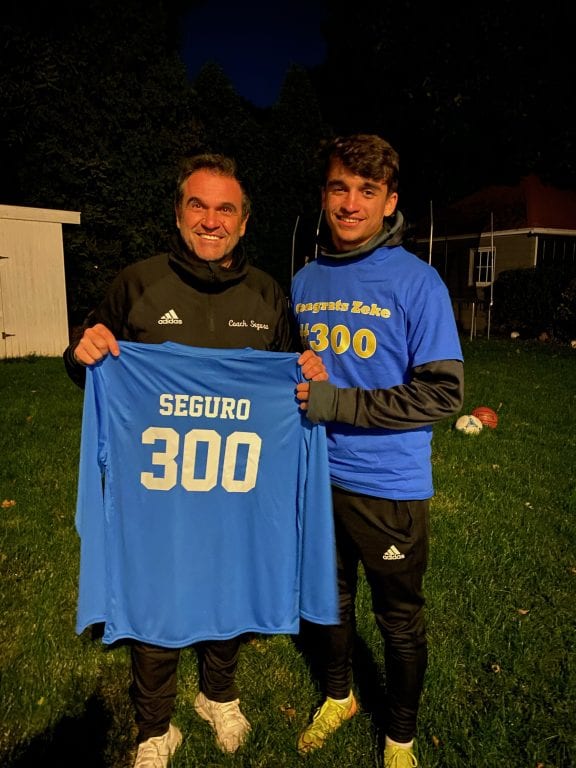 In a year when just being able to play soccer is a victory, Hall High School boys soccer coach Zeke Seguro has reached a major milestone, notching his 300th win Monday night with a 10-0 win at home against Windsor.

The credit all goes to the kids, Seguro said, but he’s especially proud of how the game winning goal was scored, and who scored that goal.

“Actually Drew scored the first goal today,” Seguro said of his son, a senior on the Warriors team. “It was his best goal of the season,” and because Windsor didn’t score, it also turned out to be the winning goal.

“It was pretty special, something I will never forget, and I will cherish it for the rest of my life,” Seguro said.

His other son, Max, graduated in 2018 and also contributed to the team’s success.

“The 300 speaks volumes of the committed kids who came through the program. I couldn’t do it without them,” Seguro said. “They put in the work, and I am very blessed to have had such talented, gifted, and special kids … great students who are phenomenal athletes.”

Hall is now 10-0 on the season, and is not only top-ranked in the state – a position they have held since starting off the season as the defending Class LL champions – but also ranked sixth in the country by United Soccer Coaches organization.

Heading into the season with 290 wins, Seguro knew he was close to the milestone, and had a very talented team, but he said he wasn’t thinking about that, but focused on whether or not they would even be able to play.

“I was praying for the season,” he said, and particularly wanted his son, Drew, to have his senior season.

Seguro played semi-professional soccer for the Connecticut Soccer League’s Hartford Ports, and when he stopped playing in his early 30s, he didn’t want to give up the game.

“I knew I wanted to coach,” Seguro said. “I loved working with kids.”

Coaching high school was meant to be a five-year plan, Seguro said, but he loved it. His first three years were spent coaching the JV team at Wethersfield High School, and then the head coach job at Hall opened up.

Seguro had also been coaching travel soccer in West Hartford, and he got the job at Hall – where he also met his wife, Maryanne, who works as an administrator in the athletic department.

Seguro said the team was able to celebrate after Monday night’s victory.

Hall has two more games remaining in the regular season, hosting crosstown rival Conard (7-1-2) on Wednesday afternoon and traveling to Bloomfield (1-8-1) on Thursday.

Although there won’t be any state championship games in this COVID-impacted year, there is talk of a mini regional tournament, Seguro said.

“This year is so different,” he said, but if they make it to Thursday and get all of the regular season games in, he said he’ll be very happy.