Four members of the Hall High School Class of 2021 who plan to participate in sports at the Division I level formalized their commitments Wednesday on the first day of the National Letter of Intent early signing period.

Due to the COVID-19 pandemic, the ceremony was kept brief and small, but coaches and athletic department staff are extremely proud of the achievements of these senior athletes, and wished them the best of luck as they continue their careers as student-athletes at the collegiate level. 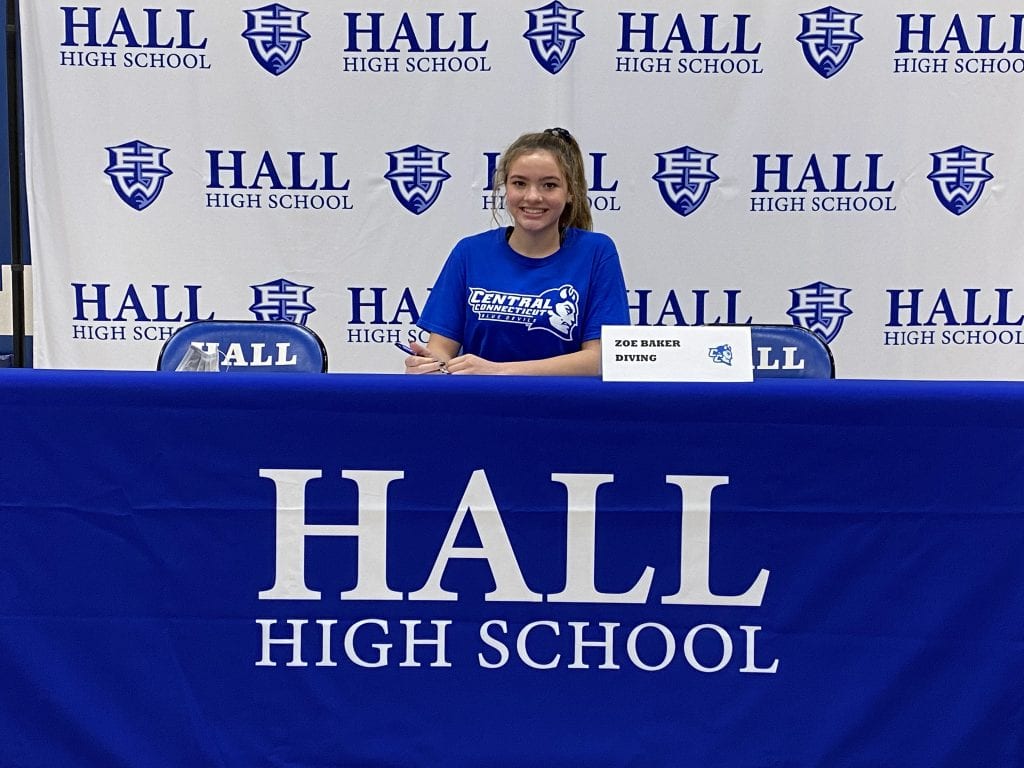 Baker holds records at Hall for both the 6-dive and 11-dive scoring format – records which she first broke as a freshman and continued to best in each subsequent year.

“The body control and the insane height from the board that Zoe displays always captures everyone’s attention as she competes,” diving coach Juan Dominguez said. “I am sure she will have a wonderful and bright career at Central.” 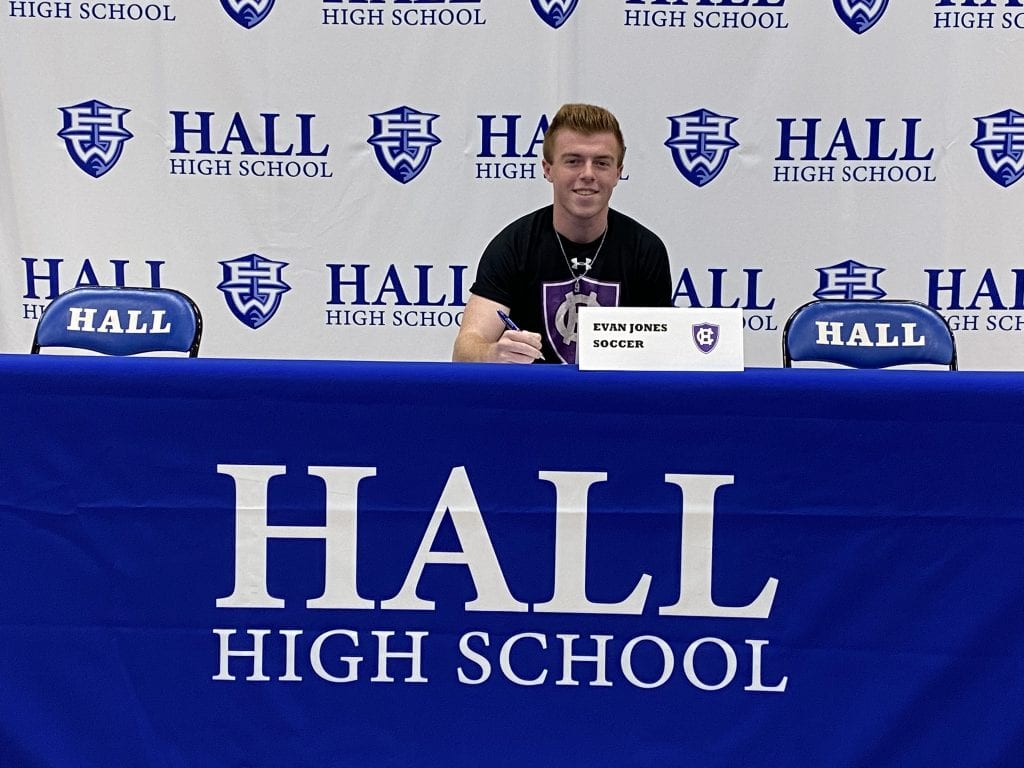 Evan Jones signed his National Letter of Intent to play soccer at College of the Holy Cross.

Jones is a four-year varsity player for Hall’s boys soccer team and was a key player in the team’s Class LL championship win in 2019. He earned All-Conference and All-State honors in 2019, and was Hall’s leading scorer during the 2020 season.

Hall ended the season, which included a two-game post season conference tournament but no state or divisional competition, with a perfect 14-0 record.

“Evan has worked extremely hard to become the impactful player he is today,” head boys soccer coach Zeke Seguro said. “He will go down not only as a top player for Hall, but in our state,” he said.

“I am confident that he will have a successful career at Holy Cross. Evan has scored 65 career goals which is the third all-time at Hall, while adding 34 assists,” Seguro added.

Jones scored four goals in a game on Nov. 2, when coach Seguro earned his 300th win. 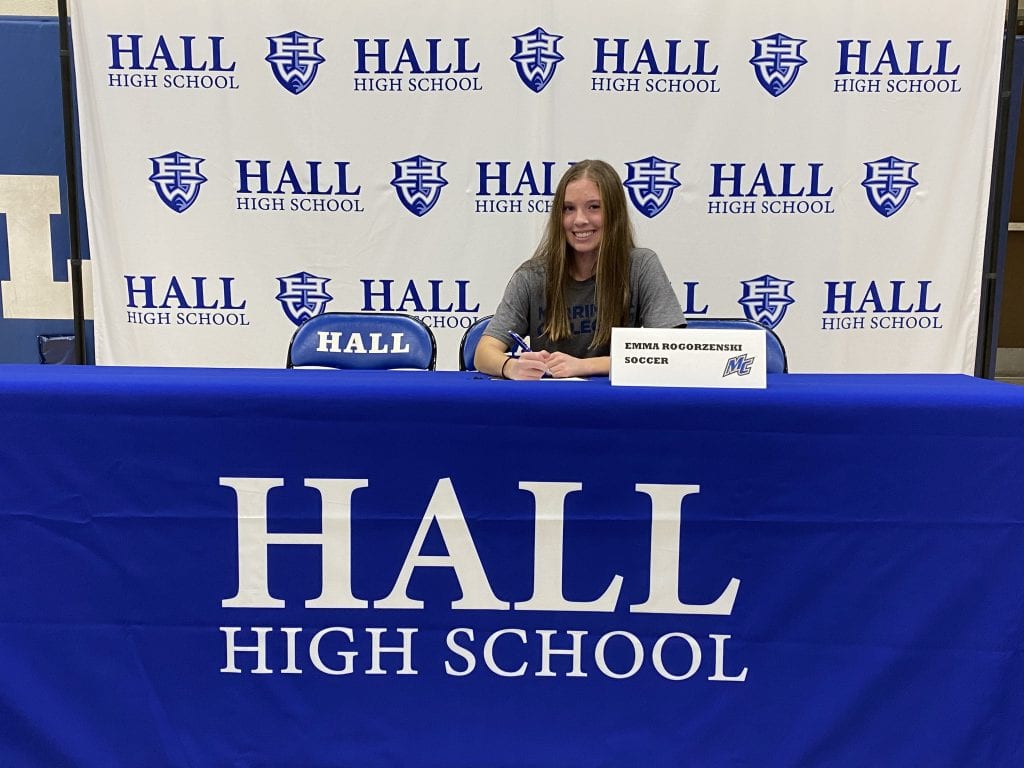 Emma Rogorzenski will continue her soccer career at Merrimack College.

A four-year varsity letter winner, Rogorzenski has captained the girls soccer team at Hall for the last two seasons. She earned All-Conference honors in both 2018 and 2019.

“Emma Rogorzenski has been a two-year captain and has always led by example,” head girls soccer coach Scott Ferguson said. “Though she’s a skilled soccer player and impressive athlete, her work ethic is beyond impressive. Most importantly, she is simply a great person.” 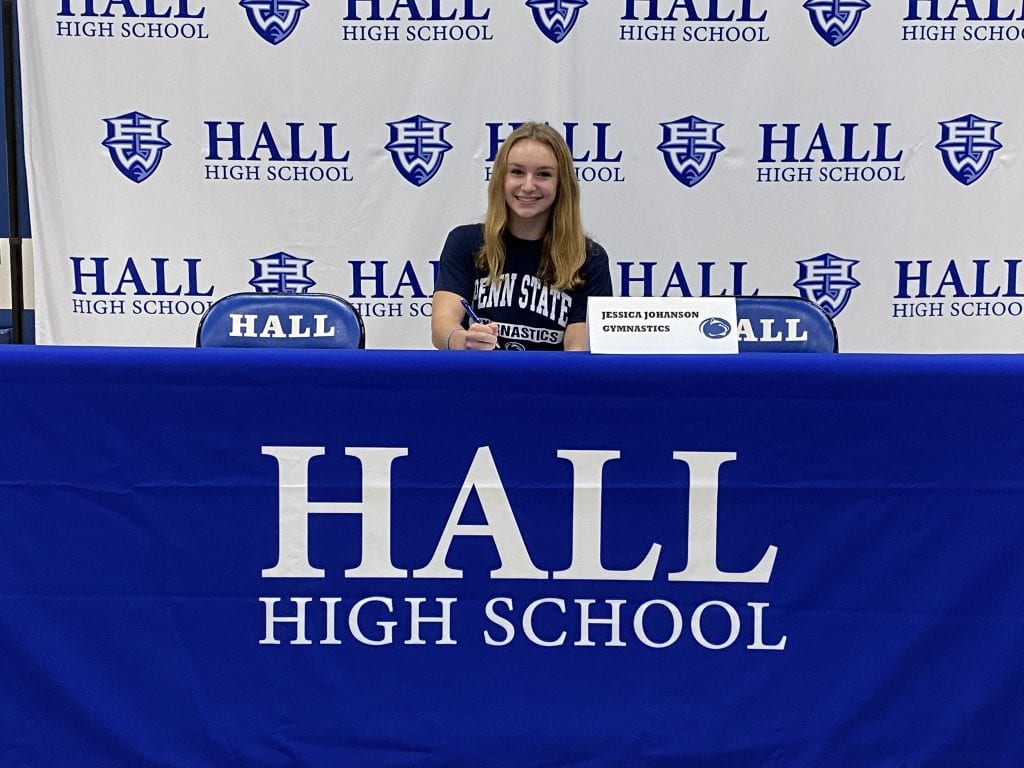 Jessica Johanson signed her National Letter of Intent to participate in gymnastics at Penn State University.

She has competed as a member of the club team at Gymnastics Express in Glastonbury, coached by Maureen Chagnon.

Competing at Level 10 over the past four years, Johanson has won multiple event titles at the state and regional level, and has qualified three times to compete in the Junior Olympic Nationals. She is looking forward to continuing both her academic and athletic careers at Penn State with a full athletic scholarship.