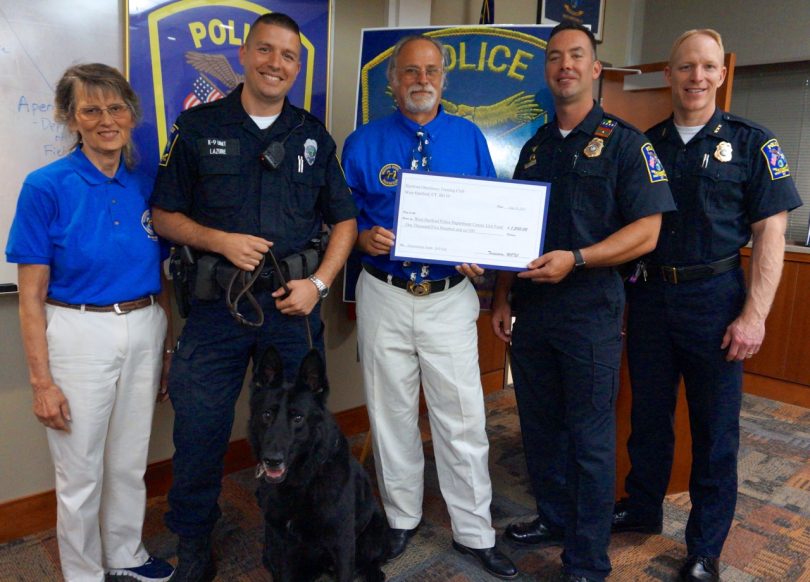 Members of the Hartford Obedience Training Club presented a check to West Hartford Police on June 23, 2017.

A local dog training club raised funds and has given a generous gift to the West Hartford Police Department in support of its K-9 program, and members of the Hartford Obedience Training Club (HOTC) presented the $1,500 check at the station Friday afternoon.

“We so appreciate this. We can definitely use the money,” Gove said. “We don’t always have funds to buy discretionary items.”

Montano said the club wanted to raise money for a discretionary fund, rather than targeted to a specific item. Unexpected and un-budgeted expenses often arise in the K-9 unit.

“They will be able to use this for medical bills or equipment needs that pop up,” Savastra said. He is a former K-9 officer who just a month ago lost his partner-turned-pet, K-9 Reign, who was euthanized on May 24 at age 14½ after losing the ability to walk due to degenerative back issues.

The HOTC raised $750 and the club matched the amount raised after learning of K-9 Reign’s passing. It is the second time that the HOTC has made a donation to the West Hartford Police K-9 unit.

“The K-9 program is so important. Not only do they find lost kids, catch the bad guys, and find drugs, but they are also so good for community relations,” Savastra said. The K-9s are part of the police family, but also an important part of the community.