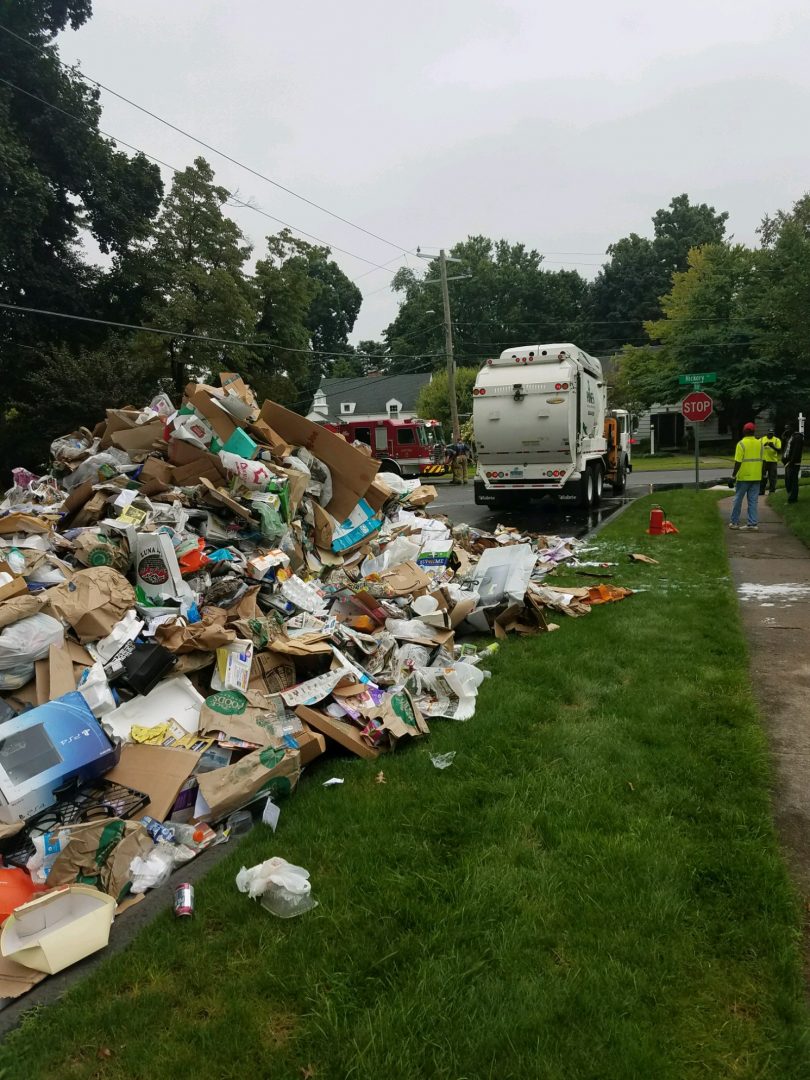 A load of recycling was dumped onto High Point Lane in West Hartford after it caught fire. Courtesy of West Hartford Public Works

The contents of a recycling truck had to be dumped out onto the roadway Friday morning in West Hartford when the driver noticed smoke. 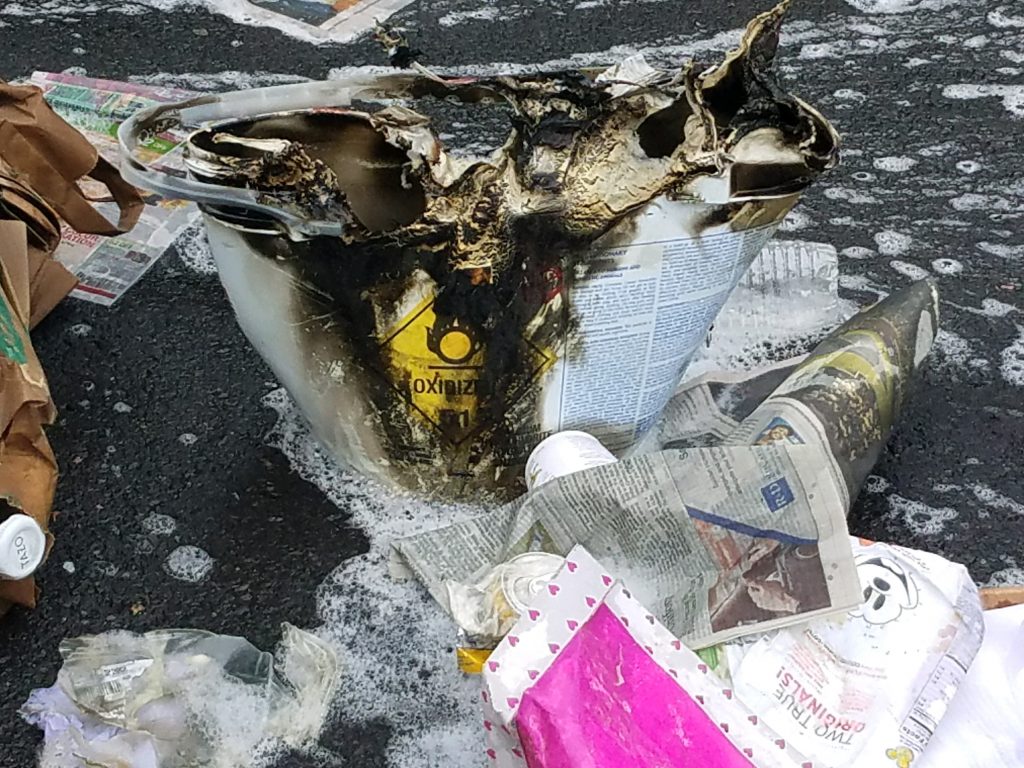 A container of pool oxidizer was determined to be the cause of a fire in a West Hartford recycling truck. Courtesy of West Hartford Public Works

A driver for Paine’s Inc. had to drop his load of recyclables into the middle of High Point Lane near the intersection with Hickory Lane in West Hartford on Friday morning when he saw smoke coming from his truck.

“He saw the problem, and the safety procedure is to dump the load,” Public Works Director John Phillips said. That’s the only way to put the fire out, he said.

The cause of the fire turned out to be a large tub of oxidizer pool shock, an item which is clearly labeled as hazardous waste and should never have been thrown into the recycling bin – nor is it a material that should go into the trash bin, Phillips said.

Oxidizer, when mixed with water – like the small amount of water left in other containers that were being recycled – can result in an explosive environment and lead to fire.

The incident was reported to the West Hartford Fire Department at 8:48 a.m., Battalion Chief John Sokolowski said. The fire had already been put out by the Paine’s driver, who used an extinguisher, but the crew from Engine 2 sprayed it with foam that is designed to penetrate deeply into fires to ensure it was completely out.

While catastrophe was averted in this case and there were no injuries and no damage to the truck, this incident serves as an important lesson, Phillips said.

“People can’t do this,” said Phillips. “They really need to pay attention to what they are doing.”

When crews on site picked through the load, they found the container of oxidizer – the hazardous waste placard still visible even though the container was partially melted.

Everything else that had been dumped by the truck appeared to be cardboard, paper, plastics, and other materials that were being properly recycled. However, it’s likely that everything will now need to go into the trash because it’s been soaked.

It’s the responsibility of residents to look at the labels on what they are discarding, said Phillips. Oxidizer can be brought to a household hazardous waste drop-off event – and there’s one in West Hartford at the Public Works facility on Brixton Street on Sept. 22 – or handled by the pool company.

“The residential bin should not automatically be the first choice,” Phillips said. This is the type of material that cannot be discarded at the curb.

Public Works Operations Manager Brian Mitchell said that the driver took the best course of action in dumping the load onto High Point Lane, allowing the fire to be extinguished quickly and saving the truck, which is worth close to $500,000, he said.

The driver had radioed his supervisor as soon as he saw smoke, and was instructed to empty the truck.

Mitchell said that a crew was dispatched to clean the material up off the street, and within an hour the site had been cleared. The material was all put into a rolloff – an open refuse container – and removed by Paine’s. After ensuring that there is nothing left smoldering, Paine’s will dispose of the material tomorrow, Mitchell said.

Because the load that was dumped was recycling and not trash, there was no lingering smell and no foul liquids to be cleaned up, Mitchell said. 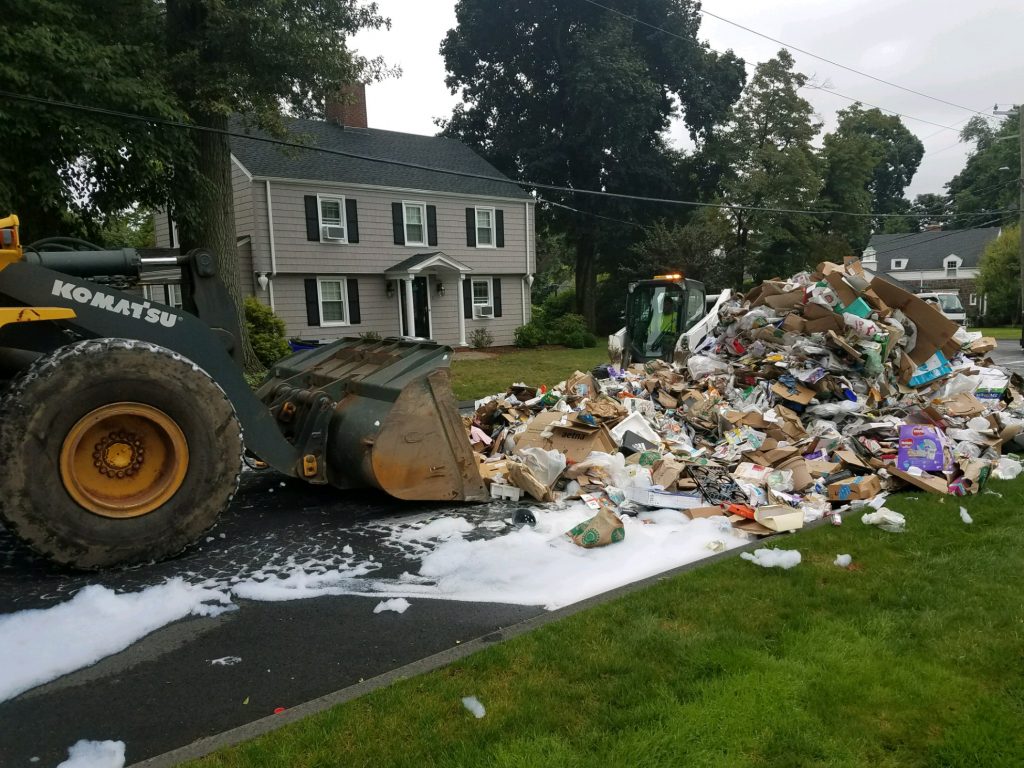 A load of recycling was dumped onto High Point Lane in West Hartford after it caught fire. Courtesy of West Hartford Public Works 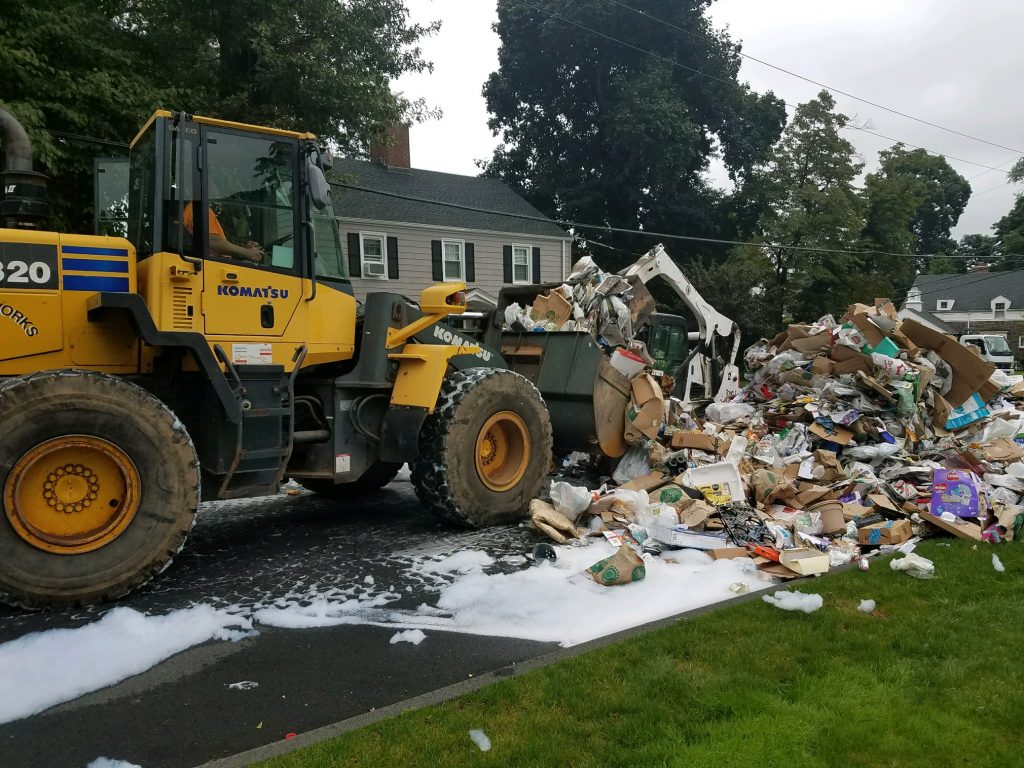 Public Works crews clean up the recycling material after the fire was extinguished. Courtesy of West Hartford Public Works