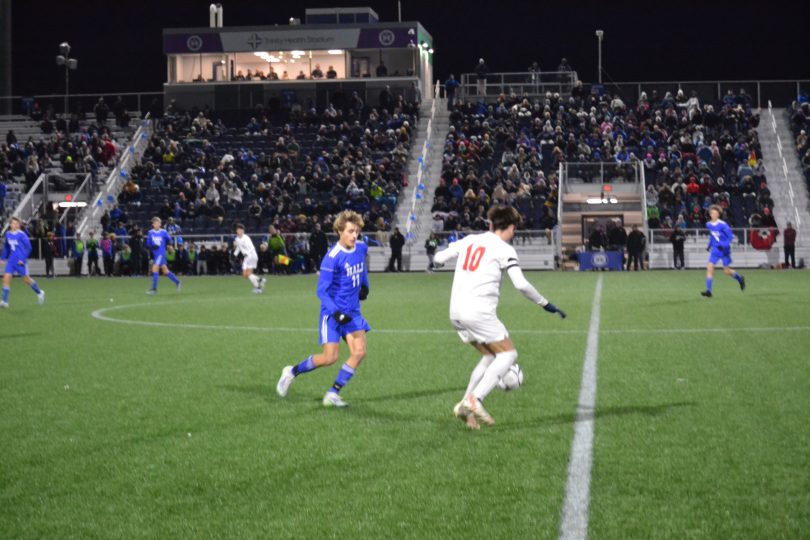 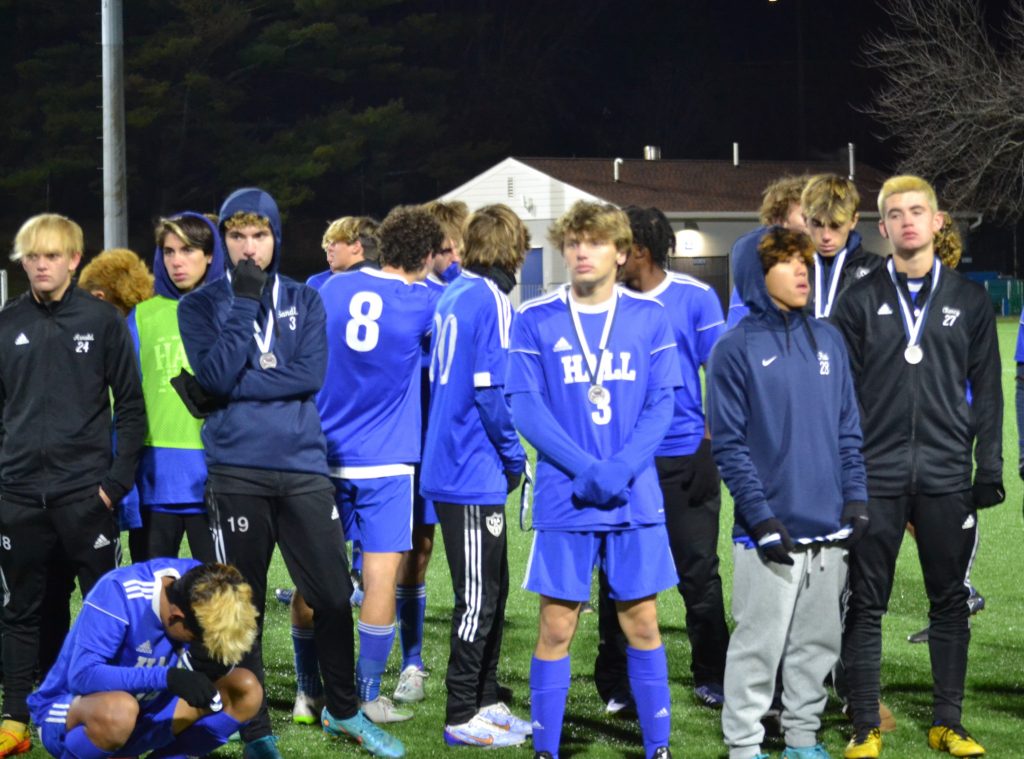 Just four days after beating Norwalk on PKs in the semifinal, Hall converted three of its five chances, and when Lucas Luzuriaga’s fifth try for the Cardinals sailed into the back of the net it was the fourth time in five post-season games this season that they won on PKs. 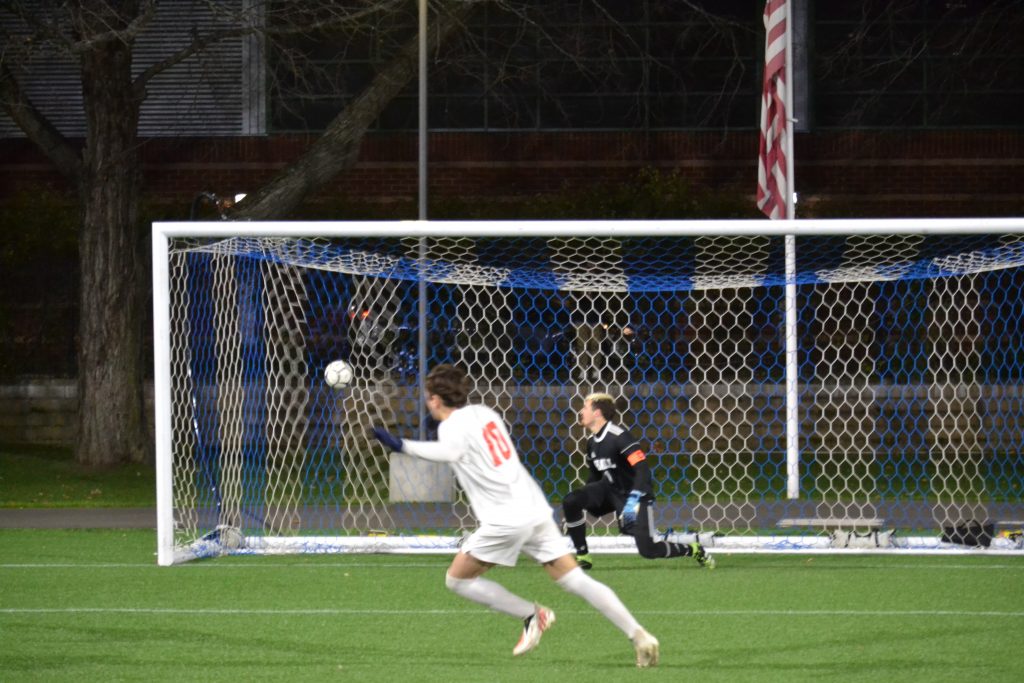 “It was a great high school game and I am very proud of my guys,” said Hall coach Zeke Seguro. “I am dissatisfied that we didn’t win,” he added.

Hall started the game strong getting several good scoring chances in the opening 10 minutes. The best may have come when Lucas Almeida made one of his trademark runs down the sideline and cut the ball back into the middle to Sam Sandler. His shot on goal, however, went off a Greenwich defender. 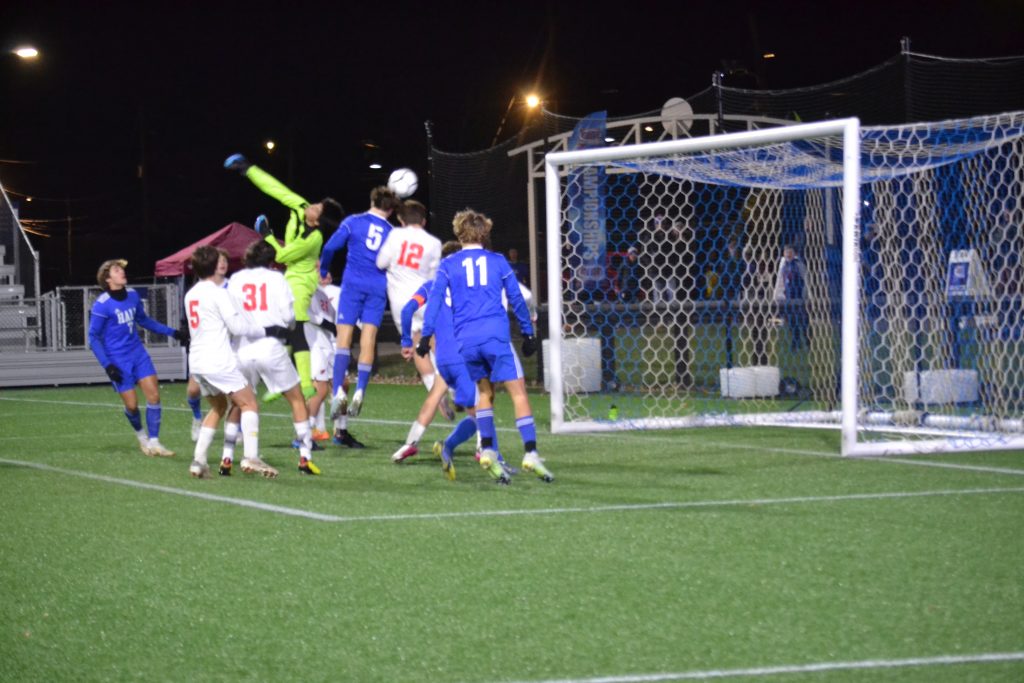 With just under 12 minutes played, Hall would get the game’s first goal. Sandler lofted a free kick from the right side that Almeida got a head on. Greenwich goalie Nick Figueroa made a one-handed save that popped up in the air and Jack DeLoreto was there to head it in. It was a repeat of the earlier matchup between the two clubs earlier this season when DeLoreto headed in a corner for the first of five Hall goals in a 5-0 win.

Once they had the lead, Hall seemed to slip into a slower pace of the game, controlling the ball with square passes and back passes. “Their wingers are very good and we were trying to respect that,” said Seguro of his team’s play. “I was telling them to get forward, it was not a game plan.” 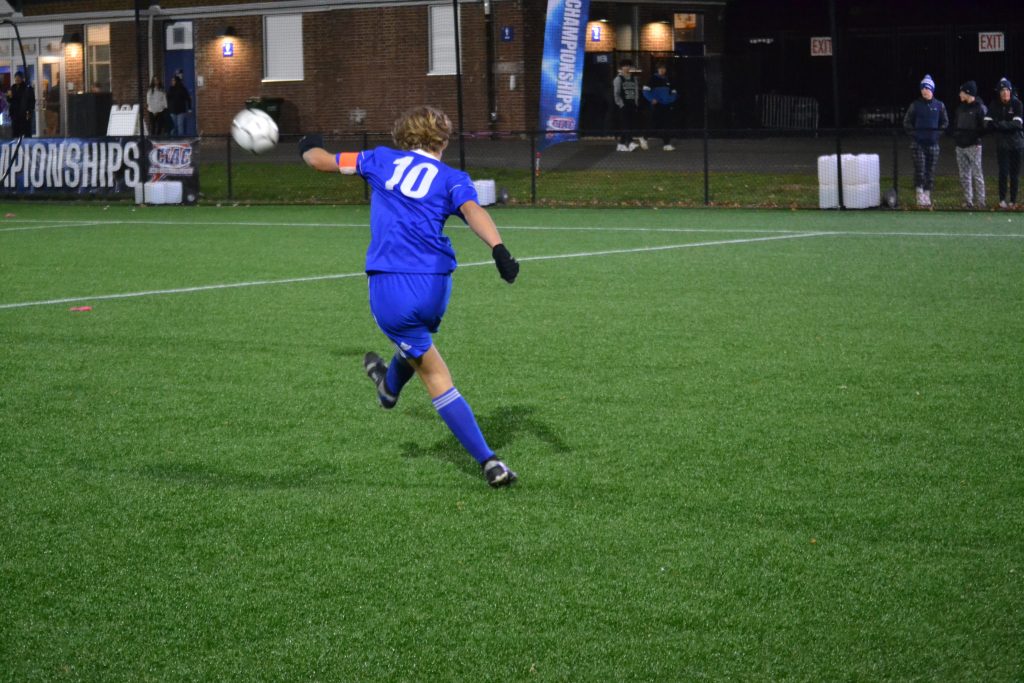 Sandler would have Hall’s next good scoring opportunity when Tommy Nash dropped a long ball from the back onto Sandler whose shot off the dribble was saved by Figueroa. Three minutes later it was Hall senior goalie Tyler Fairchild making a strong punch to clear the ball off a hard shot. Just before the intermission, Greenwich had a scoring chance when Hall was called for a handball one yard outside the box. The ensuing freekick settled into the hands of Fairchild.

Leading 1-0 as the second half opened, Hall once again applied the early pressure with Almeida and Sandler using their speed and skill to create opportunities, but they could not convert them into goals. 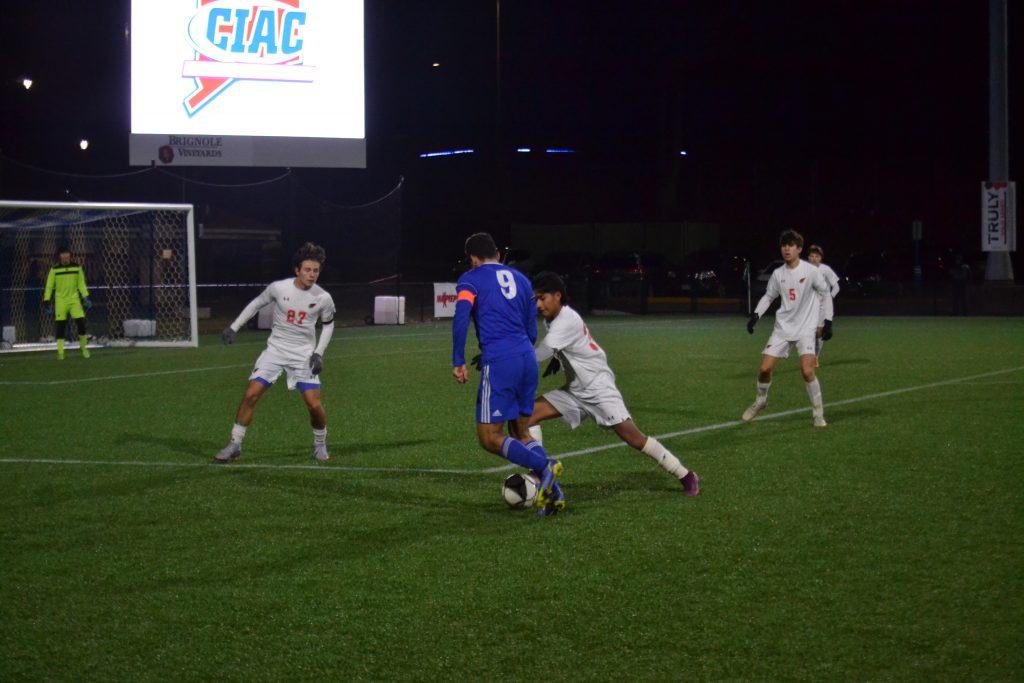 At 5:30 into the second, Greenwich would get the equalizer on a quality shot from game MVP Maximo Ferrario. He picked up a pass and let go with a beautiful, bending shot  from 30 yards out. It squeezed just inside the far post, giving Fairchild no chance. Five minutes later it was Ferrario scoring again, this time slipping a ball along the turf into the far side for the Cardinals’ first lead of the game.

After taking the lead, Greenwich turned to a slower pace to run time off the clock. They also spent a lot of time on the stadium turf with injuries. At one point three different players were down at the same time in different parts of the field, forcing a stoppage of the clock. Hall began to press forward, and with 17:15 were the beneficiaries of a lucky bounce. It was Sandler again taking the shot, but this time it the heel of a defender and went into the upper left corner of the goal to tie it at 2.

The goal was a momentum changer as a rejuvenated Hall – and their fans – pressed for the winner in regulation. Despite their efforts in regulation, the score was tied at 2 after 80 minutes. 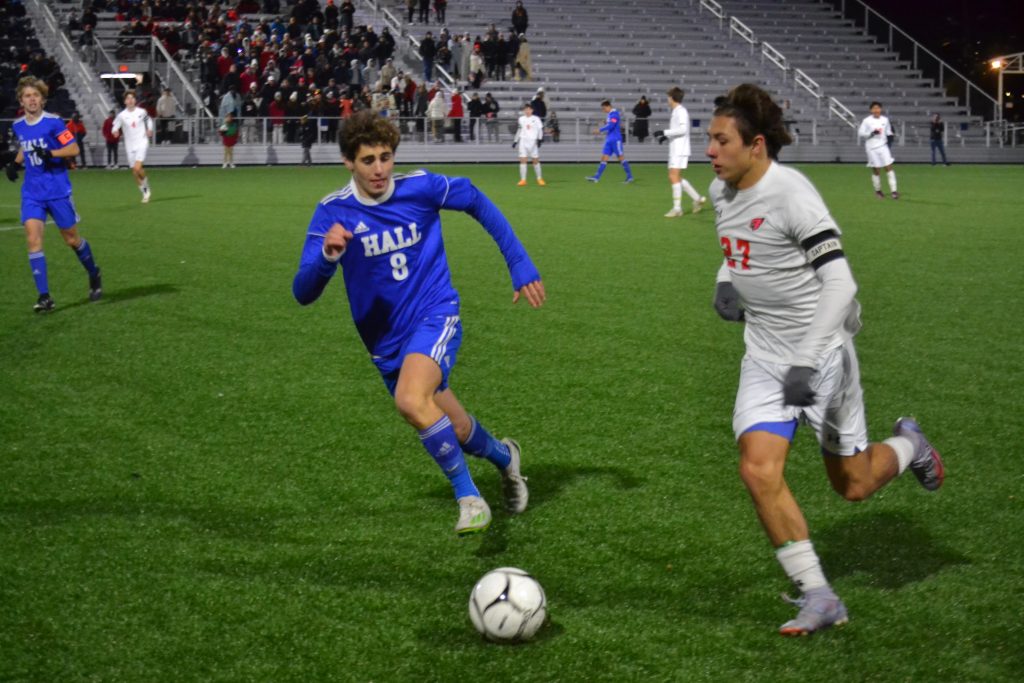 Both sides had opportunities in the two 10-minute overtime periods, but neither could convert. That set up the dramatic penalty shootout. 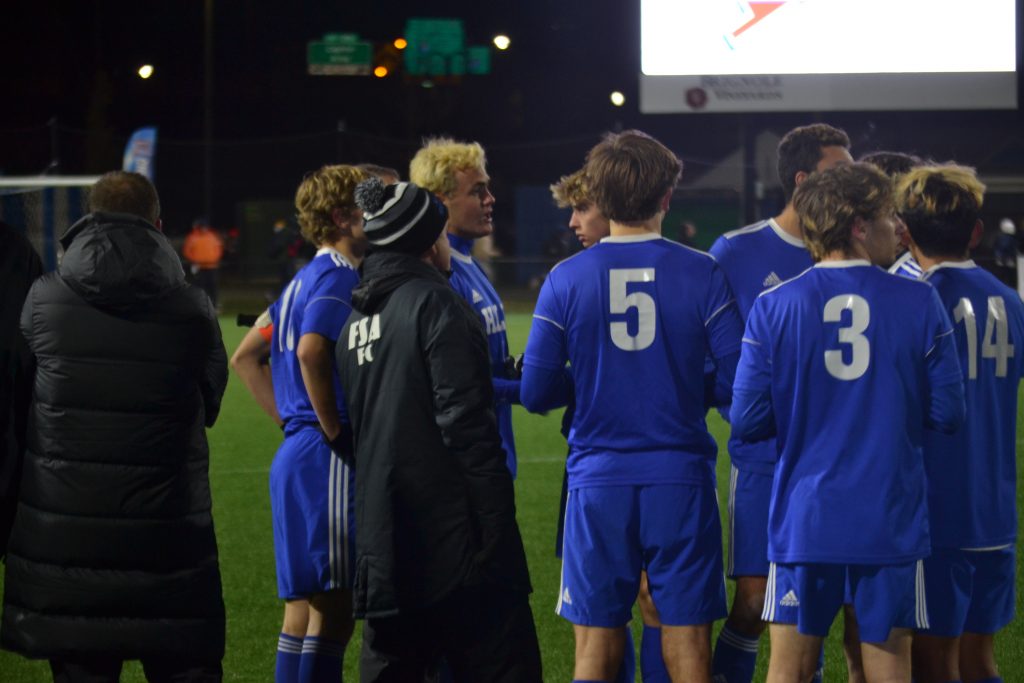 Each side would start with five chances and if it was tied, would continue from there. Almeida stepped up for Hall as the first shooter and scored. Greenwich answered with its first shot before Sandler converted on the Titans’ second shot. Charlie Fiore then took a very slow walk to the spot, before tucking his shot in just past the outstretched arm of Fairchild. Senior Quinn LaRock – who had played a strong defensive role all game – saw his kick sail over the crossbar, but Greenwich’s Thomas Tishler did the same thing to keep it tied. Figueroa would stop Tommy Nash’s try going to the lower left, before Ferrario would put the Cardinals up 3-2 in the round. 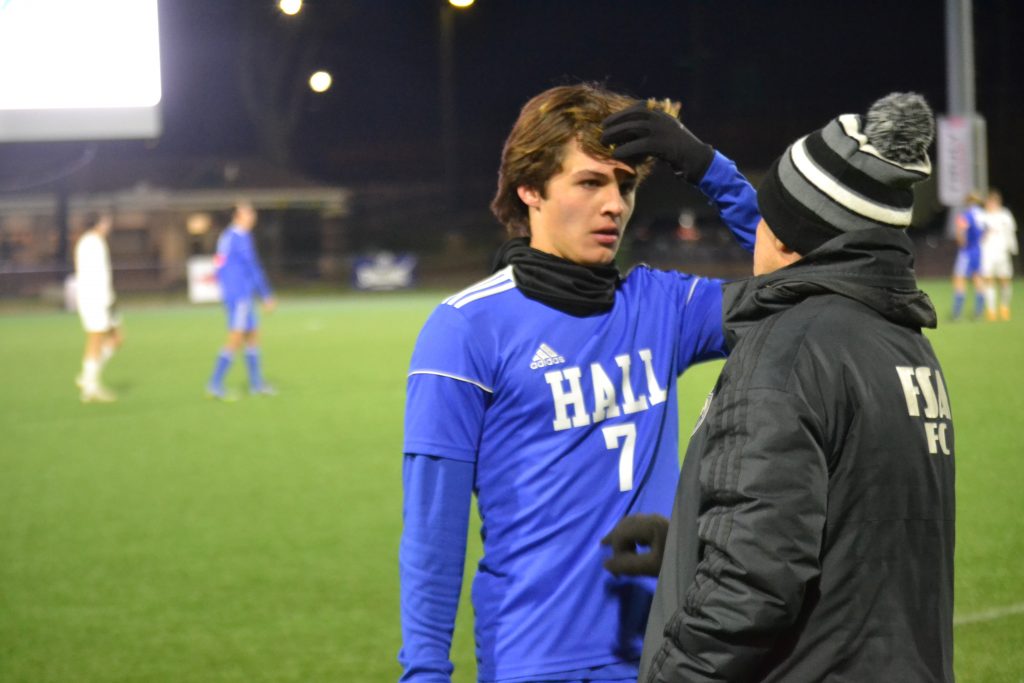 On Hall’s fifth shot Aaron Sandler converted and that meant that Greenwich would have to score to end things in the 6-shot round. Luzuriaga calmly stepped to the spot and delivered the championship clinching shot to Fairchild’s right.

While Greenwich celebrated the win, Hall players stood stunned, their season ended with their only loss  in the team’s 23 games.

“These kids gave me everything they have,” said Seguro, who still has just one title in 28 seasons at the helm. “I am proud to be their coach.” 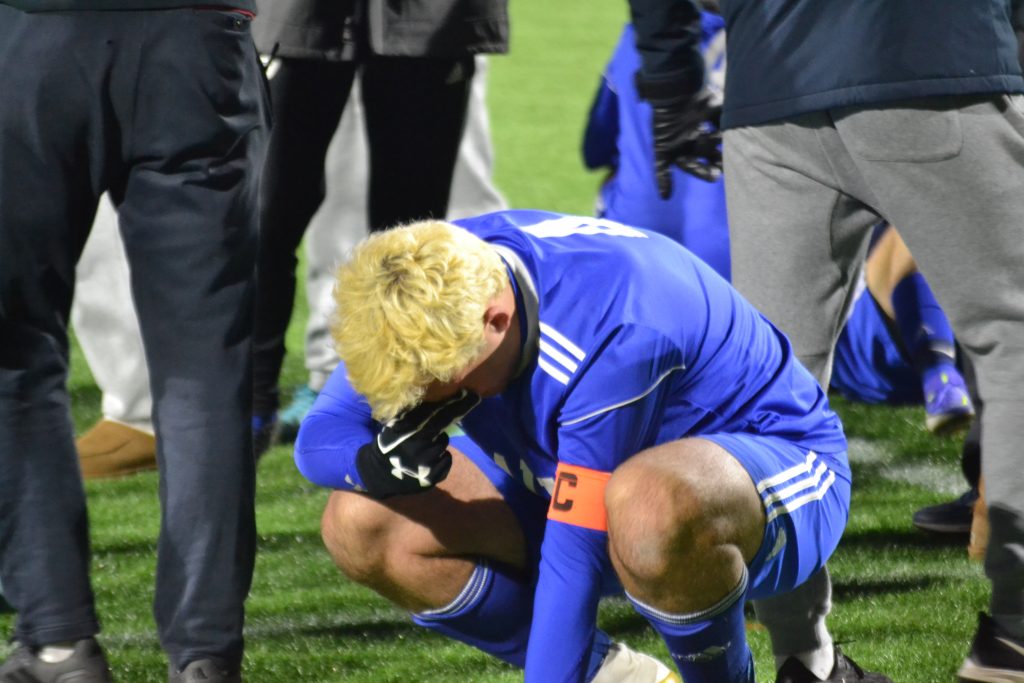 Teams from the Fairfield County Interscholastic Conference and from the Central Connecticut Conference have won 16 of the last 17 Class LL boys soccer titles and seven times the two conferences went head-to-head in the championship game.

Since the 2019 season, Hall has lost just two soccer matches in regulation – one to Glastonbury in 2019 and one to Maloney in 2020. They were knocked out of the 2021 playoffs by Farmington in penalties, before losing Saturday night’s title game in PKs.

The title is the first in 61 years for Greenwich boys soccer.

Officials ejected a ball boy from Greenwich for challenging Almeida after the Hall striker went down hard after being fouled. 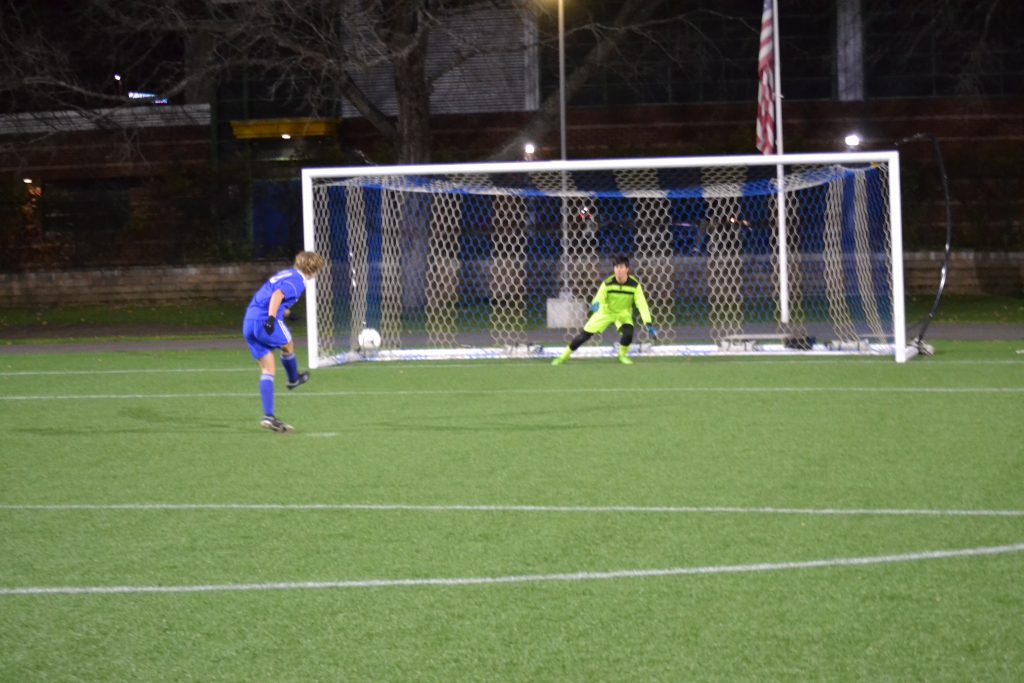 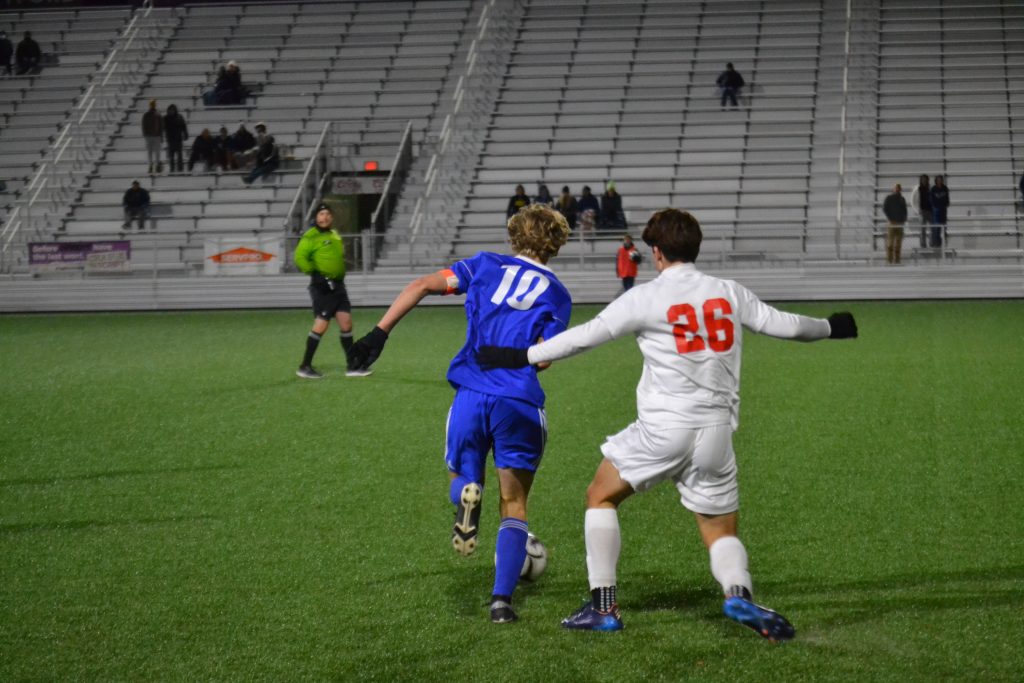 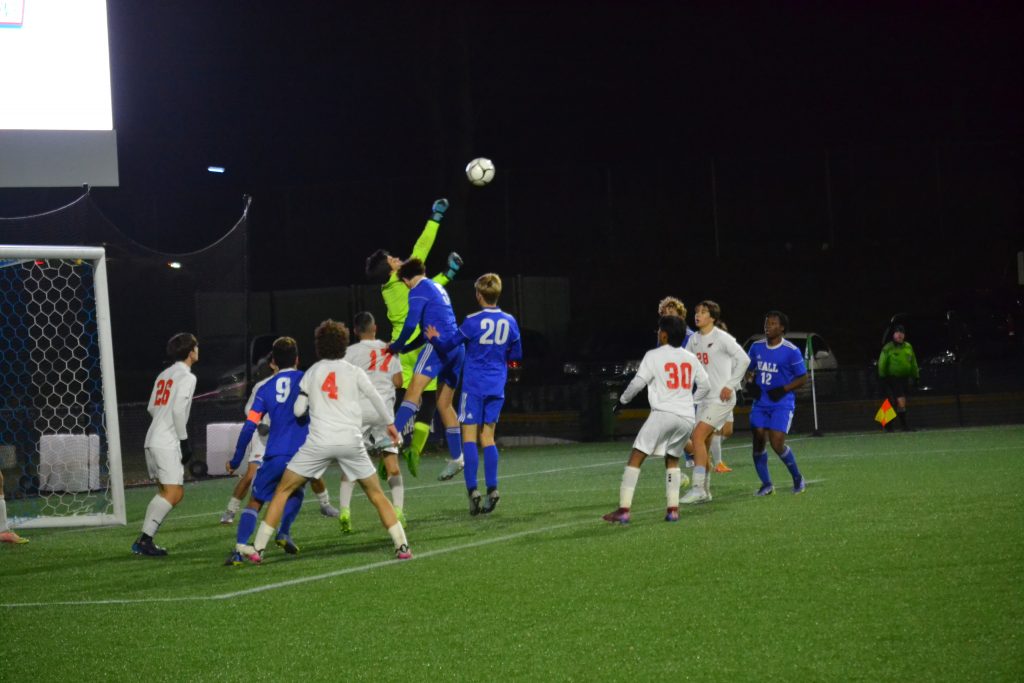