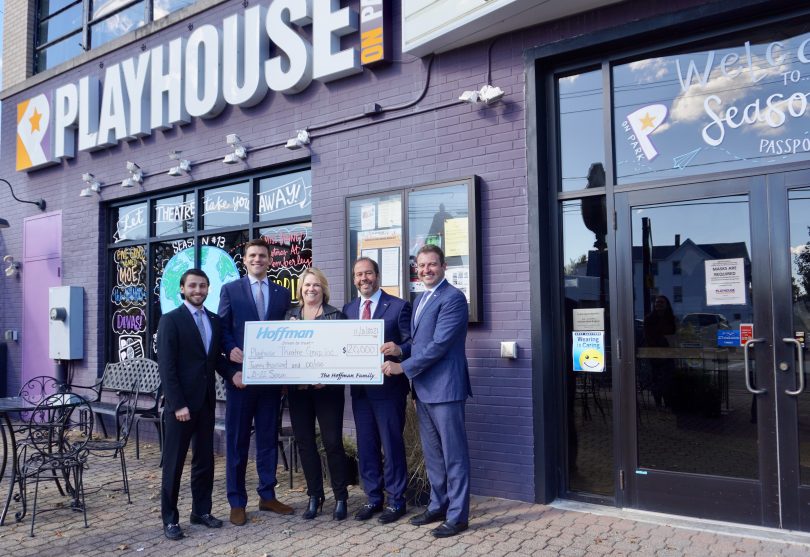 Tracy Flater (center), executive director of the Playhouse on Park in West Hartford, with a check for $20,000 presented by the Hoffman family. Pictured, from left, are Joshua, Zachary, Matthew, and Jonathan. Photo creditL Ronni Newton

Members of the Hoffman family, which has deep roots in West Hartford and the surrounding community, reflect on the milestone anniversary, and their commitment to support of the arts and other nonprofits. 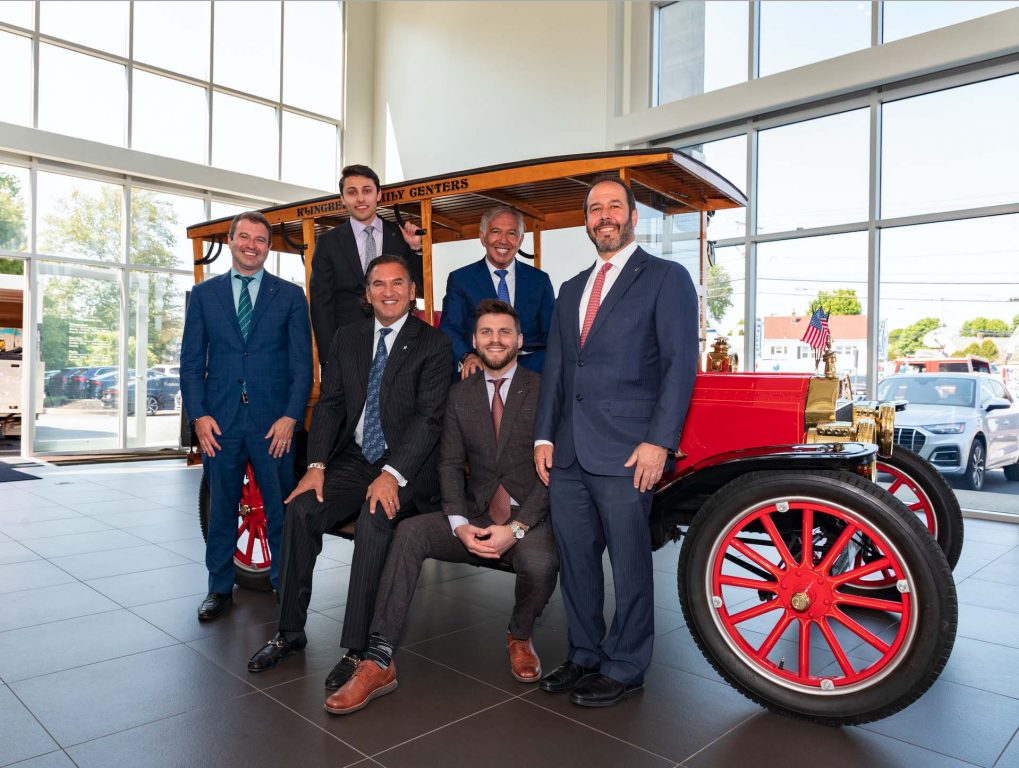 Celebrating the 100th anniversary of the Hoffman Auto Group is about more than the observance of a business milestone.

For Co-Chairmen Jeffrey S. and I. Bradley Hoffman, the grandsons of founder Israel Hoffman, it is a celebration of family. Today, four of their children are among the fourth generation to lead the company.

From a single used car dealership started in 1921, to a car empire with locations in East Hartford, New London, Waterbury and Avon/Simsbury, the Hoffman Auto Group is one of Connecticut’s oldest and largest family-owned businesses, and a Jewish one at that.

“We are grateful to our employees and the many customers who have played an integral part in attaining this century milestone,” said Jeffrey. “We look back with great pride, and are very excited about the future.” 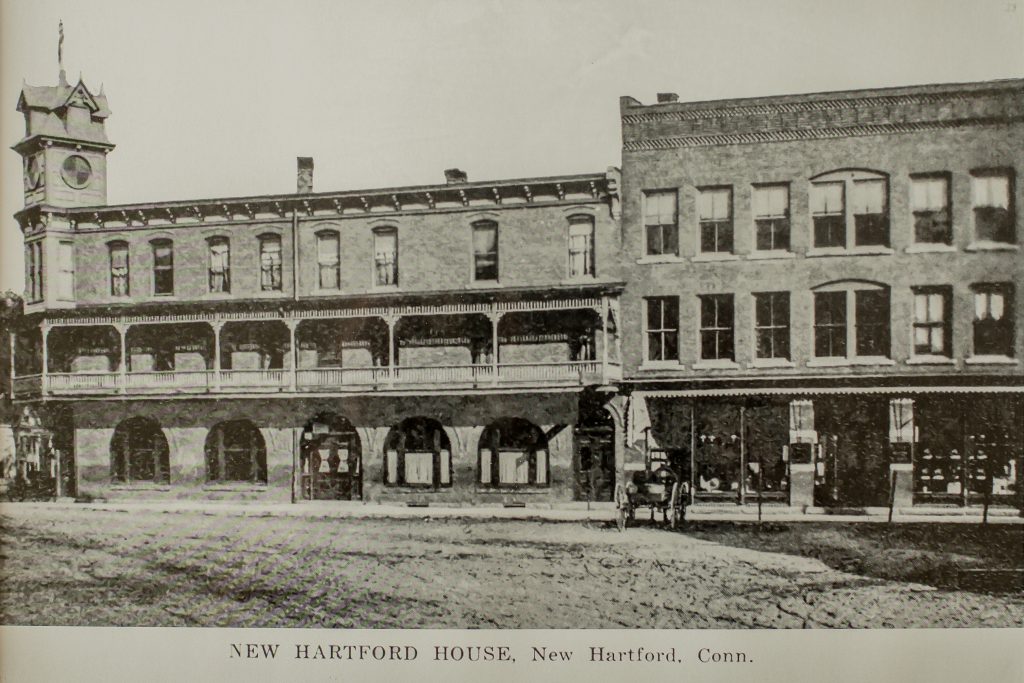 The Hoffmans’ American journey began in 1897 when their great-grandparents Joseph and Pauline Hoffman immigrated to the U.S. from their native Russia with their son Israel and daughter Rose. Another son, Barney, was born in Hartford in 1900.

“Our great-grandfather Joseph settled in Hartford in the North End as a lot of the Jewish families did in the late 1800s. He was actually a contractor and a painter,” Bradley said.

It was Joseph’s two sons who began the Hoffman auto business.

In 1917, when Israel was 21 and Barney had just graduated from Hartford Public High School, they borrowed some money and bought a 2,000 square foot, two-car service station on Oakland Terrace in Hartford.

“They started a used car lot,” Bradley said. “Then in late 1921, they opened up their first new car agency, which was Ford, in New Hartford on Route 44.”

It was there that Israel and Barney sold their first Model T Ford.

The Hoffman Motor Company soon had a waiting list of more than 100 customers wanting to purchase Model Ts. Each car sold for $565 and to attract more customers, the Hoffman brothers offered four free half-hour driving lessons with each purchase.

The popularity of automobiles continued to grow so much that customers had to wait as several months for their new Model Ts.

And then the cars had to be put together.

“The train would be running right near the building and showroom, which is still there in New Hartford. They would take the parts off the train and the car was assembled inside the [Hoffman dealership],” Jeffrey said.

It would take two and a half hours to attach the fenders, wheels, splash pans, and running boards to the main body of the vehicle.

By then, Israel had married Rose Krivitsky who grew up on Vine Street in Hartford. (Rose’s father Samuel had immigrated to Hartford from Motele, Russia, where he was a classmate of Chaim Weizmann, the first president of Israel. According to the book Harford Jews, 1959-1970, Krivitsky and Weizmann remained friends throughout their lives.)

Just a couple of years after starting their Ford dealership in New Hartford, Israel and Rose welcomed their son, Burton.

As the family grew, the Hoffman Auto business also grew, with Hoffman purchasing a variety of new automotive brands. In 1922 the Hoffmans began offering customers the chance to make down payments and financing – an innovative business practice for that time. In 1932, the Hoffman brothers purchased a Dodge Brothers-Plymouth agency. They received the Dodge Silver Trophy Award for leading the 750 Dodge-Plymouth dealers of New England in sales.

But while increasingly successful, not everything was easy for Hoffman Auto.

After having a fruitful business relationship with Ford for several years, in 1932 Henry Ford, a virulent antisemite, cancelled their Ford franchise when he found out Israel and Barney were Jewish. In 1938, the Hoffmans purchased a Lincoln-Mercury franchise. Because Lincoln-Mercury was owned by the Ford Motor Co., the Hoffmans purchased the dealership under a different name, gaining full distribution for all of central Connecticut. (Hoffman triumphantly became a Ford dealer again, six years after Israel passed away. His son Burton re-acquired the Ford franchise in Hartford.) By 1940, they sold the Lincoln-Mercury franchise.

By 1945, Israel’s son Burton Hoffman, a Navy veteran of World War II and a West Hartford resident, joined the business, and it continued to grow. When Barney Hoffman retired in the early 1950s, Israel and his son Burt, who later served as president of the Hartford Automobile Dealers Association, took over management and ownership of Hoffman Motor Co.

When Israel Hoffman died in 1956 at age 60, Burt became chairman of the company. The following year, the Israel Hoffman Lounge was dedicated in the sanctuary of Hillel House the University of Connecticut. The speaker for the dedication was Dr. Judah J. Shapiro, national director of the B’nai B’rith Hillel Foundation under his leadership.

“It wasn’t that our grandfather wasn’t ambitious, but our father was really ambitious and he absolutely wanted to grow the business and make his mark in the world,” Bradley said.

He served on the Board the Bess and Paul Sigel Hebrew Academy of Greater Hartford, which honored him with its “Man of the Year” award. He also served for many years as a Director of the Jewish Federation of Greater Hartford and, in 1986, he was awarded the “Lion of Judah” at a dinner hosted by State of Israel Bonds. Shortly before his death, he was named an Honorary Life Member of the Board of Trustees of the Hebrew Home and Hospital. The Hoffman family were among the founders of both The Emanuel Synagogue and Beth El Temple.

Burt’s philanthropy also extended to quiet expressions of generosity in the local community, including providing loaner cars to several rabbis. 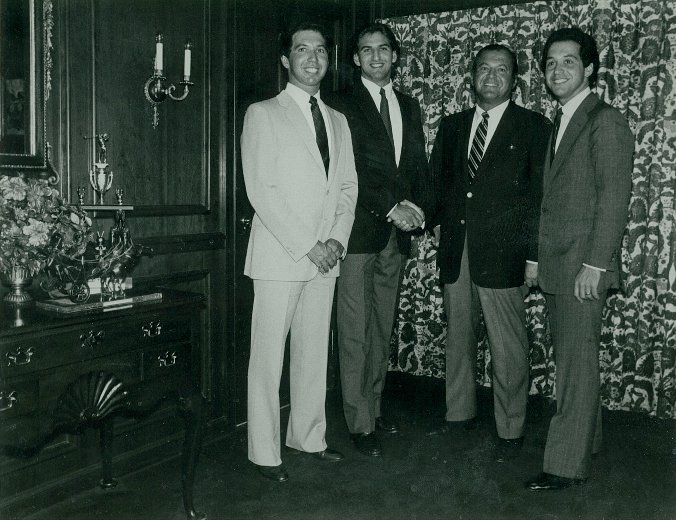 All three sons of Burt and his wife Phyllis came on board the company – Jeffrey in 1972, Todd in 1975, and Bradley in 1982. Todd went on to pursue other interests, but Jeffrey and Bradley continue to grow Hoffman Enterprises.

Today Hoffman has 10 dealerships in locations in four towns – East Hartford, New London, Waterbury and Avon/Simsbury. They also own two Collision Centers and the Hoffman Insurance Agency of Connecticut.

In January, Hoffman finished a multi-million-dollar development project which brought its BMW dealership to the I-84 corridor, on the Cheshire/Waterbury line.

While looking to the future, the Hoffmans have not forgotten the past.

“I remember my grandfather and my father in the old Hoffman Oldsmobile building with the creaky floors,” Jeffrey recalled fondly. “We had a Rocket 88 sign over the front door. That was when Oldsmobile and General Motors was at its pinnacle. Almost all the cars sold then were American cars. That building was on Connecticut Boulevard in East Hartford and here my brother and I are, many years later, and we’re still on Connecticut Boulevard.”

“It is truly humbling, and we are grateful for the courage and commitment demonstrated by previous generations of Hoffman family members,” Bradley Hoffman said. 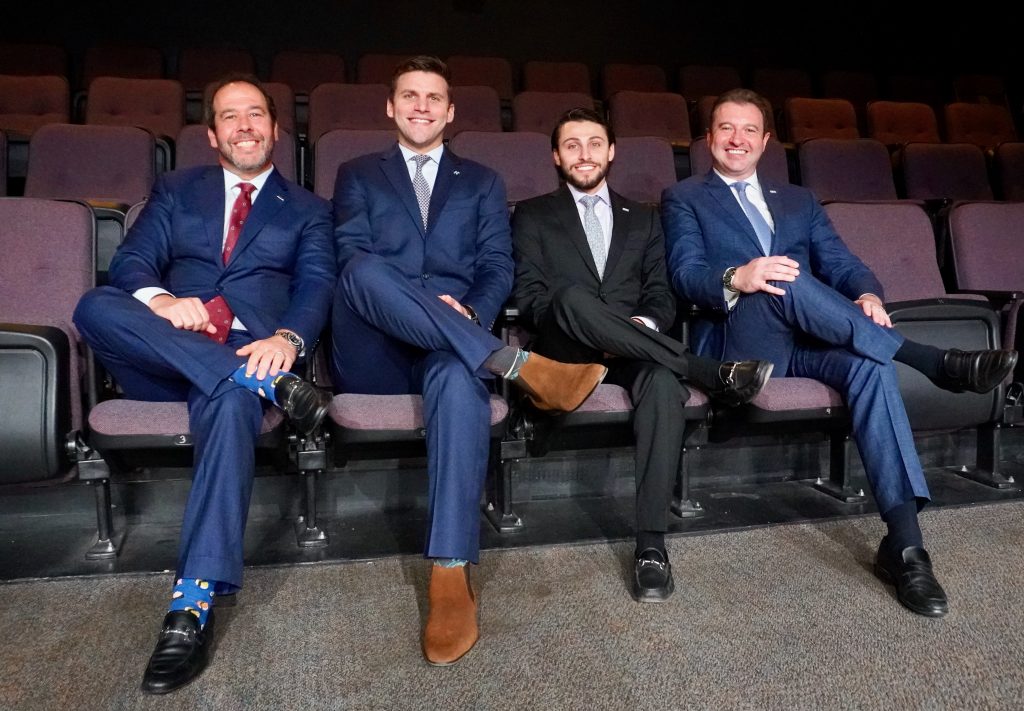 The fourth generation continues the traditions

In 2002, Jeffrey’s son, Matthew Hoffman, entered as the first member of the fourth generation – followed by Jeffrey’s son Jonathan, and Bradley’s sons, Zachary and Joshua.

“Our family has provided a wonderful example of how to be community partners and giving back to those who support us,” said Matthew. “We will certainly continue to carry on those traditions.”

Matthew said in deciding which nonprofits to support, they consider the four pillars about which they are passionate: arts, health, education, and social wellbeing.

Recently they donated $20,000 to West Hartford’s Playhouse on Park. 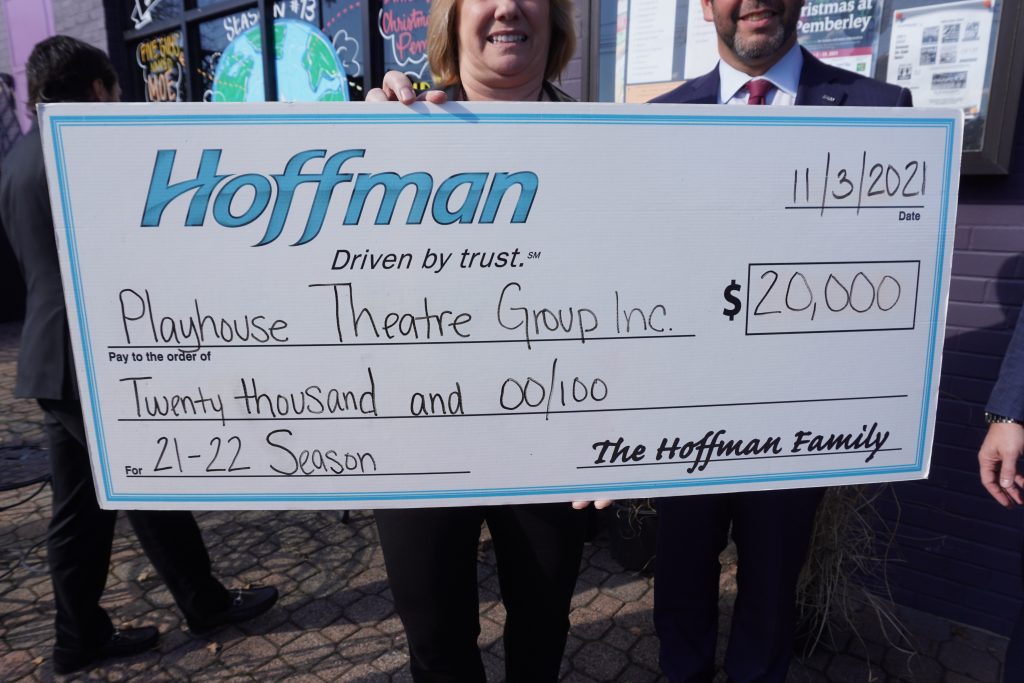 The Hoffman family donated $20,000 to the Playhouse on Park in West Hartford in support of the 2021-2022 season. Photo credit: Ronni Newton

“West Hartford has one of the most vibrant theaters,” Matthew said. “Playhouse on Park has been special to our family since it opened, and there is nothing like it. Small theaters need more support.”

Jonathan said giving to the organizations that represent them, and have a visible impact, is part of their relationship with the community. He and Matthew also have three sisters, all of whom are involved in the arts in some way.

“Our grandfather was a massive philanthropist,” Zachary said. He’s personally passionate about causes related to children, but whatever they support, they want to be able to see it through.

“I’ve worked with Jeffrey for 25 years,” said Tracy Flater, executive director of Playhouse on Park. The support from the Hoffman family has been so important, she said, from the very beginning and she understands that they choose their philanthropies carefully. “They don’t just invest willy-nilly. They do their homework,” she said.

The philanthropical decisions are made as a team, and that’s the philosophy they embody as well for the business that is now run by Jeffrey and Bradley, along with the four younger Hoffmans. 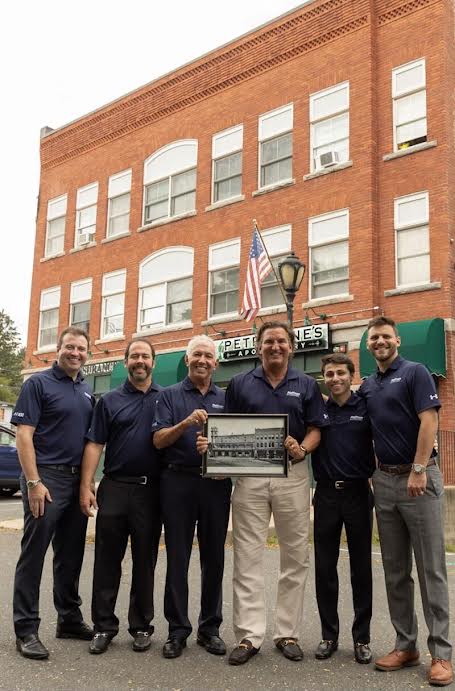 Standing in front of the the New Hartford building that housed Hoffman Auto Group’s first new car dealership are (from left) Jonathan, and Matthew, their father Jeffrey; Bradley, and his sons, Joshua and Zachary.

“We all run it together as a team,” Matthew said. “One Hoffman,” Jonathan added.

“First and foremost we’re driven by trust. That’s our motto,” Matthew said. Not only is the business a long-standing family business, but there are employees who have worked with them for as long as 40 or 50 years.

The business has lasted through wars, financial crises, and most recently COVID-19. “We’ve survived through it all,” Zachary said.

Joshua, who is the youngest of the fourth generation, said innovation has been a key to success. He joined the company mid-pandemic, in July 2020, and helped bring about “Hoffman at Home,” a completely online car-shopping program. “The most important thing for us is for customers to be able to buy vehicles on their own terms,” he said.

Hoffman at Home will deliver cars, and handle recall items as well.

“We’ve added service tools that bring our clients into the service experience,” Jonathan said. Via their phones, clients can watch their cars being worked on.

And if you call a dealership or service center, you’ll get a person, not a machine. “There’s always going to be a person on the phone,” Joshua said.

Supply chain woes are the latest challenge for the automobile industry, with inventory of all types – vehicles and parts – harder to get.

Zachary thinks it may take two years for the supply chain issues to resolve. “But we’re prepared. We’re able to change the dynamic of our business, to adapt. … Our father always said things would happen. This is our first speed bump, and it’s a big one.”

Matthew said Hoffman Auto Group is committed to retaining its employees, to making it enjoyable to work in the organization. That’s a key to success, as is contributing to the community.

“To keep our business going another hundred years, it takes that dedication,” Matthew said.

All four members of the fourth generation did something different before joining Hoffman Auto Group. Jeffrey and Bradley have required their children to get at least three years experience at an outside organization before joining the family business.

“Being a car dealer is having that entrepreneurial spirit,” Matthew said. “Every day is different. It’s a fun business.”

They’re all on the ground, with their teams, every day, Jonathan said.