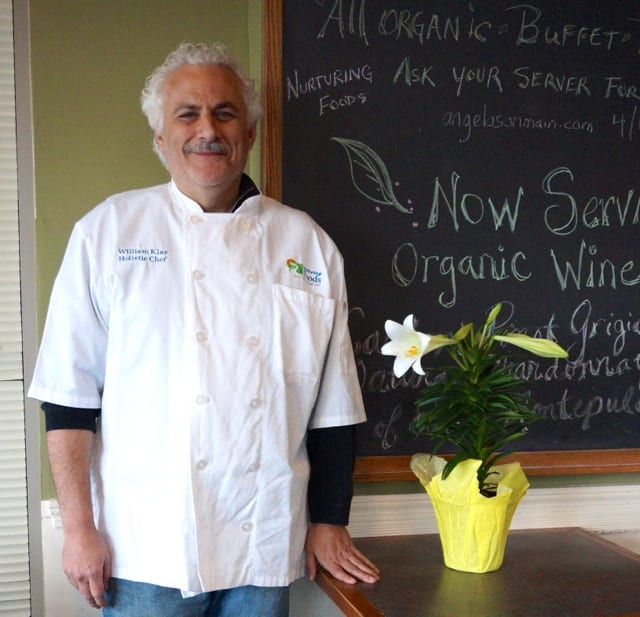 Chef William Klar has brought an innovative menu based on ‘whole food goodness’ to the menu at Angelo’s on Main at Rockledge Golf Club in West Hartford. 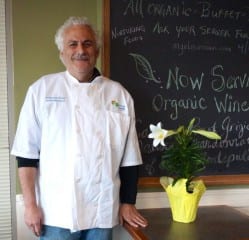 William Klar is a firm believer in the healing power of “whole” foods, but it was a diagnosis of stage four prostate cancer rather than his training at the French Culinary Institute in Manhattan that led him to specialize in cooking for health.

Klar was hired last year as a consultant and chef by Angelo Chirico, owner of Angelo’s on Main, to “bring more innovative, eclectic, and natural food to the restaurant,” he said.

“Food is something we all need, but the big problem is that processed foods bring people ‘out of balance’ – they bring disease to the body,” Klar said. “Processed food is like pure poison to me.”

Klar said that he used to cook – and eat – everything. He didn’t think twice, or really even consider, what processed food was.

“Nine years ago I was diagnosed with stage four prostate cancer,” Klar said. He pursued traditional treatment at Sloan Kettering in New York, but after several years of treatment all doctors would tell him is that he would continue to get worse, that there was no cure. “That didn’t resonate well with me,” Klar said.

He made a decision to explore alternative ways of healing, and enrolled in the Kushi Institute, a “center for macrobiotic health and healing” in Beckett, MA, where he lived for four months. He learned how to practice Emotional Freedom Technique (EFT) as well as Emei Qigong, and about the healing power of a diet that he believes clears the body of toxins.

“I started doing research about food,” Klar said. “These days, people get sick and they take pills, and then they are locked into a system,” he said. He said he learned about Hippocrates, who back in the 5th century BC said, “Let food be thy medicine, and let medicine be thy food.”

Chirico, who was introduced to Klar through his holistic cardiologist, Dr. Robert Silverstein at St. Francis Hospital, is a firm believer, too. Chirico is a trained chef, but when he was diagnosed with heart and cholesterol problems and wanted to change his diet, “I told [Dr. Silverstein] I didn’t know how to cook like that.”

Klar taught him how to make “amazing meals,” Chirico said, and he decided to bring that healthy food to the Angelo’s on Main menu.

Klar is convinced that if you eat a real “farm to plate” meal, it rids your body of toxins. “It’s a loving commitment to your body, helps settle your mind, and everything – your eyesight, your hearing – everything gets better,” he believes.

He’s gradually introducing those healthy “whole” foods to Angelo’s on Main, experimenting to see what people like, and regularly offering specials on the “Nurturing Foods” menu. Many of the offerings are gluten free and vegan, but he also prepares meat – even bacon.

Organic, Klar said, is what makes the difference.

Every other Tuesday night Angelo’s is now offering an all-you-can eat organic buffet. The next one is on April 14. Click here for the menu.

The “Nurturing Food” menu is also available for take-out.

“No one’s doing this. We’re right here on South Main, near two Whole Foods stores, but no one else is cooking like this,” Klar said. He’s preparing “happy food,” he said.

Many of Klar’s dishes have Thai, Indian, and Chinese influences. He loves to make falafel, and fresh hummus. He makes a pizza crust that is yeast-free, made from 100 percent sourdough, and topped with mozzarella, grilled asparagus, and fresh tomatoes.

“Meats are good, as long as the animals are grass-fed, hormone-free, steroid-free,” Klar said. He said to eat meat from cows that walk around and eat grass. “A cow doesn’t know how to digest grain,” he said.

He also prepares natural chicken, natural eggs, wild-caught fish. “The smaller the fish, the better,” he said. Nuts and seeds are good – as long as they are organic and pesticide-free. Dairy is okay, too, but Klar said he favors raw milk and raw cheese.

Wine and beer are okay, too, Klar said, but in moderation. “Organic,” he added. Angelo’s has organic beers and wines on the menu now, too.

The biggest villain, Klar said, is white sugar as well as high fructose corn syrup. “It’s not a food at all. It’s highly addictive, as much as heroin,” he said.

Miso soup is one of Klar’s favorite healthy foods, and he says it’s a great digestive aid. Root vegetables are also key, he said, and it’s really important to eat the produce that grows locally. “You need to be in balance with the climate and the area where you live,” he said.

“Yes, we’re a golf course restaurant, and you can still get burgers and fries, but we also serve nutritious whole foods,” Chirico said. Even the regular menu now has better ingredients and subtle differences because he’s using better oil and organic vegetables, he said. “It’s not easy to do, some of the purveyors are difficult to find,” said Chirico.

“There’s a lot of interest [in the new menu]. People want to find out how to get food like this,” Chirico said.

“The reception has been really good. They’re excited,” Klar said. “We’re doing something no other restaurants have done.”

Chirico’s own health has improved, he said, with a recent test showing less blockage in his arteries than he had five years ago – with no medical intervention.

As for Klar’s prostate cancer, “It’s gone,” he said. He broke his femur in a bicycle accident last June and had a full pathology screening. “There’s nothing there,” he said.

Angelo’s on Main is located at the Rockledge Golf Club, 289 South Main St., West Hartford. Click here for the website, or call 860-313-0460 for more information.