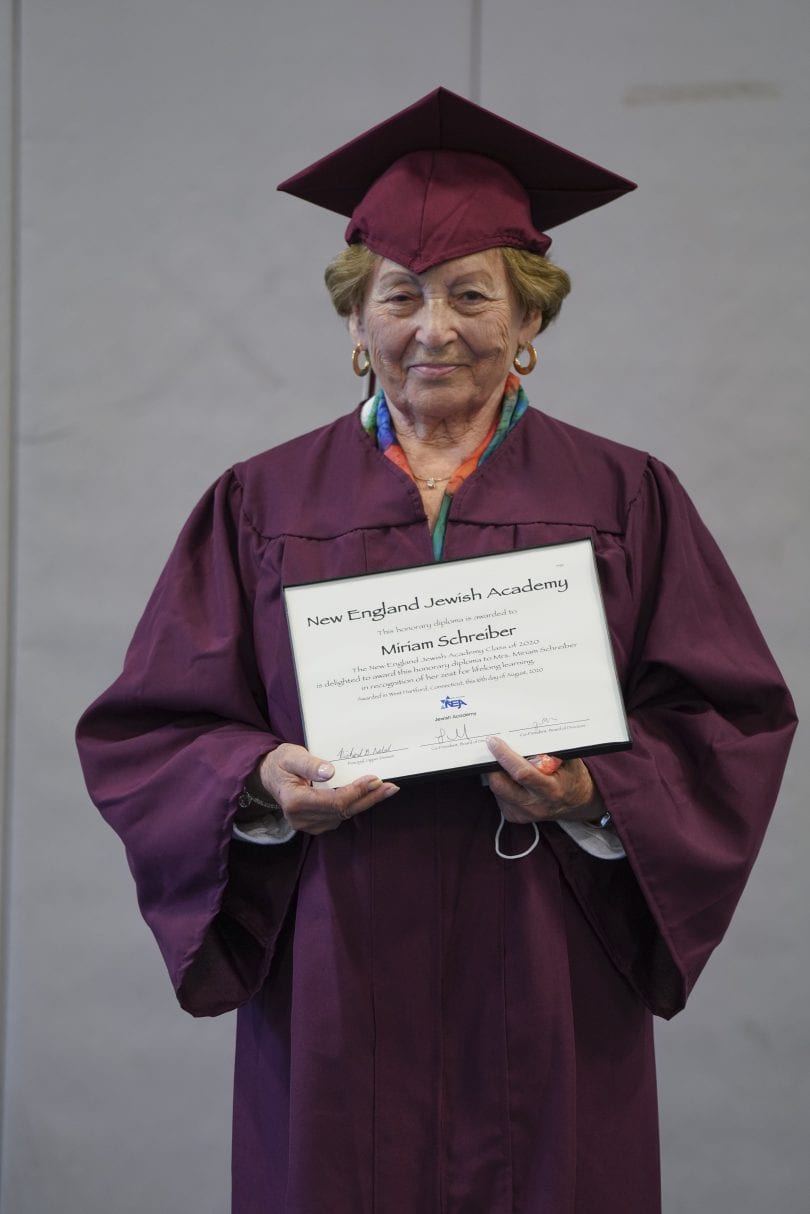 Miriam Schreiber with her diploma on graduation day. Courtesy photo

Miriam Schreiber was presented an honorary diploma by a Class of 2020 graduate at the New England Jewish Academy in West Hartford last Sunday.

Miriam Schreiber is a Holocaust survivor who escaped Nazi-occupied Poland and eventually immigrated to the United States, learning six languages along the way. In many ways, her life experiences make her far more educated than most high school graduates.

But, despite her wealth of informal education, her opportunity for more formal schooling, which she always cherished, was stolen when the Nazis invaded Poland in 1939. Schreiber was just 7 years old.

Instead, she lived and worked in a Russian “Displaced Peoples” camp up until 1946, toiling away when she should have been learning algebra and geometry. Even after the War, Schreiber always longed to return to school and receive a diploma, but she never had the chance.

Schreiber never had the chance, that is, until last Sunday, when she received an honorary degree from New England Jewish Academy (NEJA) in West Hartford.

Several months ago, Jewish Family Services teamed up with NEJA to take several of the school’s students to meet Schreiber and hear her story. The students were unaware of her deep regret about losing her formal education as well as her desire to be presented with a diploma. But, as they spoke and bonded with Schreiber, they knew they wanted to do something to help.

The students, with the help of school principal Richard Nabel, called a senior class meeting immediately after meeting Schreiber, and when presented with the possibility of graduating alongside her in the Class of 2020, unanimously voted in favor of it.

“When the class of 2020 was asked if they would share their graduation ceremony with Miriam, the response was jubilant. As the first class to graduate from the New England Jewish Academy, they were proud to join generations together in this milestone event,” said Nabel.

Sadly, with the outbreak of COVID-19, NEJA’s graduation didn’t go quite as initially planned. The graduation seniors shared a virtual ceremony, but without Schreiber, whose dream was to graduate in person.

Still, the school and Schreiber didn’t give up. With the COVID-19 pandemic subsiding somewhat in Connecticut in recent months, NEJA thought it safe to hold a small graduation ceremony in socially distant fashion for Schreiber.

That ceremony was held Sunday, Aug. 16, with representatives from NEJA and Jewish Family Services offering a few thoughtful words about their interactions and experiences with Schreiber. Bernie Schreiber, Miriam Schreiber’s son, also spoke, touching on the magnitude of this moment to his mother. 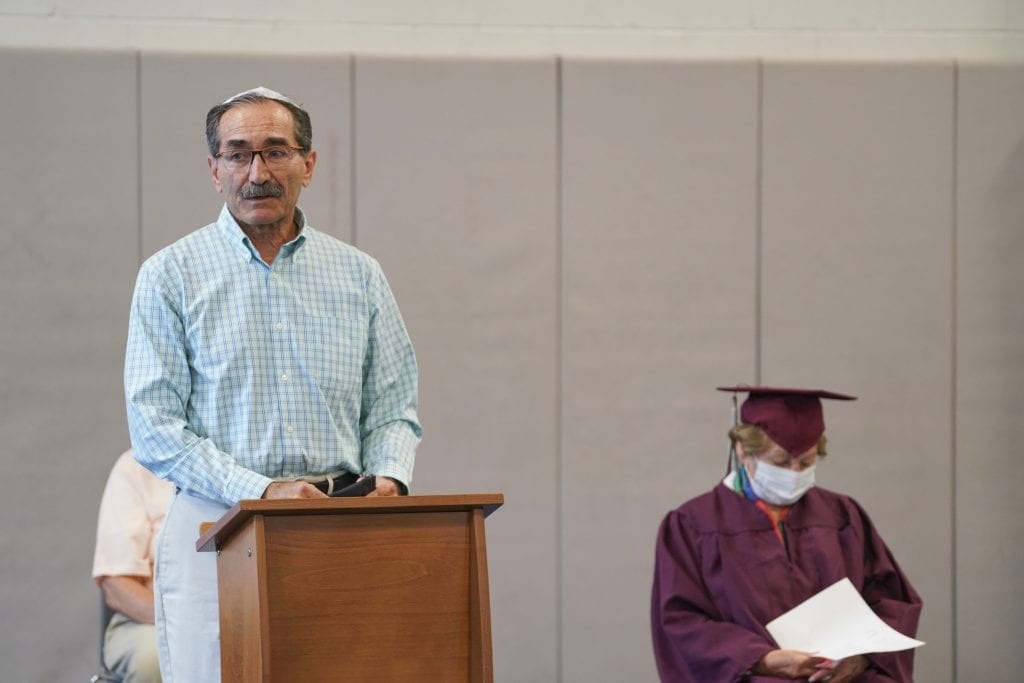 Miriam Brander, the Director of Jewish Family Services, the organization that helped put the NEJA students in contact with Schreiber, was one of several to offer her remarks, and expressed her gratitude at being able to play a part in her story.

“It is the greatest privilege to be able to work with and support our local Holocaust survivors. After the horrors they withstood, it is the highest honor to be able to help them age comfortably in their homes. … Together, these milestones truly amplify the immortality of the Jewish people and the continuation of Miriam’s and all the other survivors’ legacies to the next generation.”

Schrieber was visibly emotional during the ceremony, needing a handkerchief on several occasions as the speakers lavished their praise and admiration for her resilience and passion for education.

Shoshana Oklin, a member of the NEJA Class of 2020, was the one to present Schreiber’s diploma. The two shared a very special moment only months after they first met, and Olkin was ultimately the one to fulfill Schreiber’s dream of receiving a diploma. 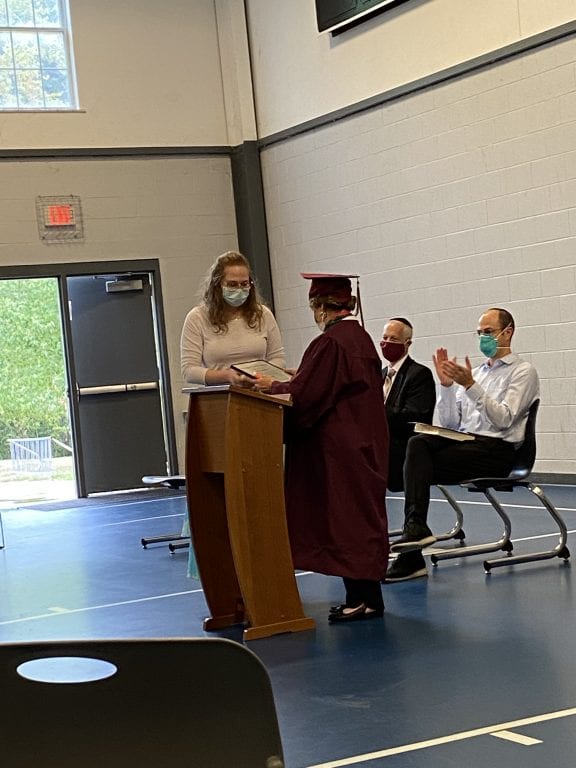 “It was my lifelong dream to get a diploma of some sort. I didn’t have the chance, never went to school, never had the opportunity,” said Schreiber.

Graduating with the NEJA students made the moment that much more fulfilling to Schreiber, as she had grown quite fond of them during their prior encounters.

“They came over to my house [the NEJA students] and I immediately fell in love with them. They were wonderful children, and they were interested in my life story.”

Graduation season might not have looked the same this year, but that didn’t matter much for Schreiber. COVID-19 couldn’t keep her from accomplishing a dream that one point seemed out of grasp. Eighty-one years after her formal education was cut short, Miriam Schreiber is now a graduate. 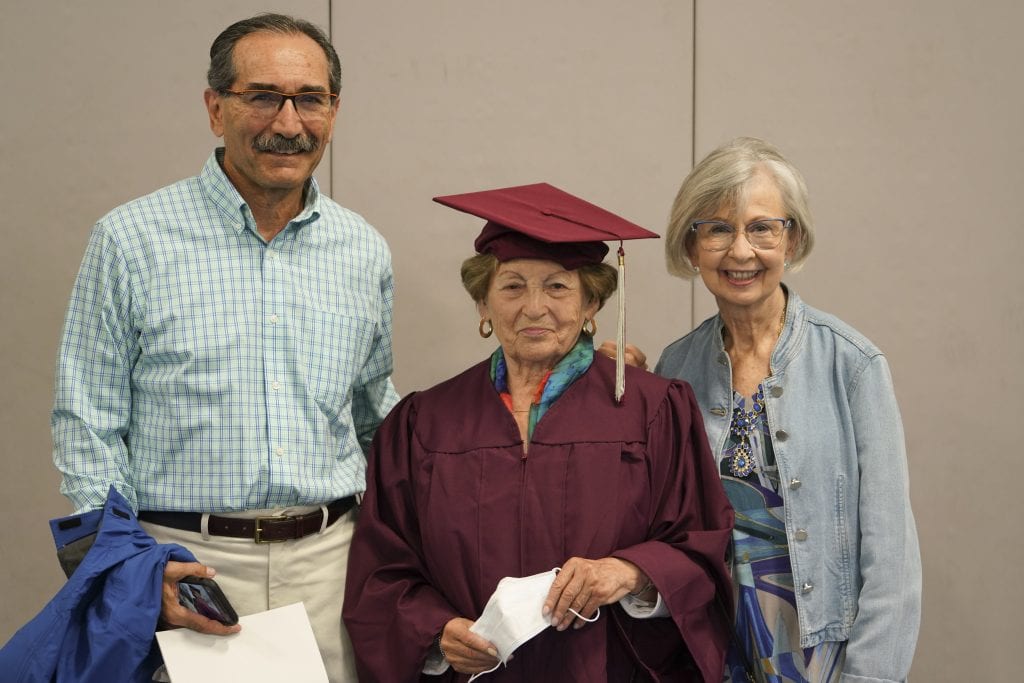 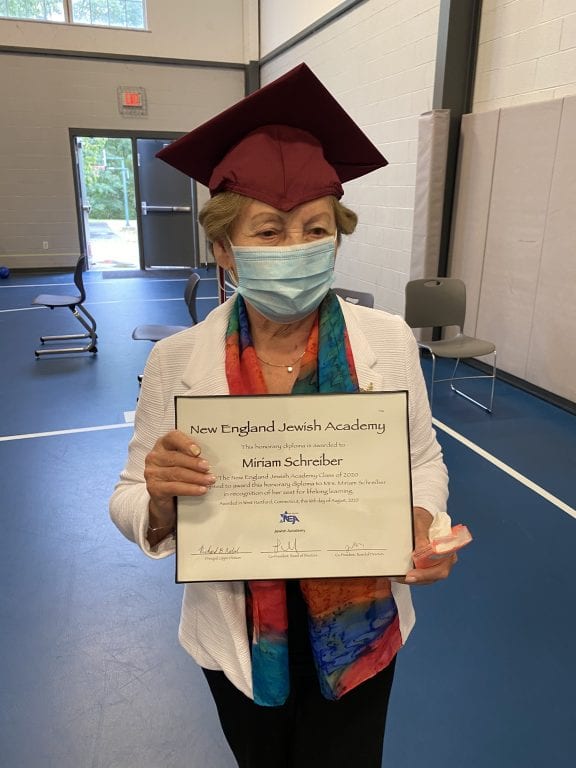 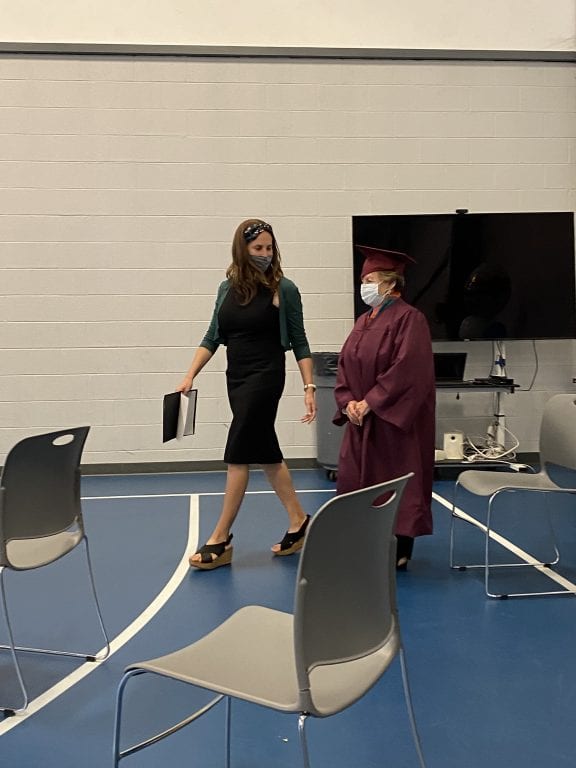 Schreiber, accompanied by Miriam Brander, enters the graduation to the tune of “Pomp and Circumstance.” August 16, 2020. Photo Credit: Dexter McCann