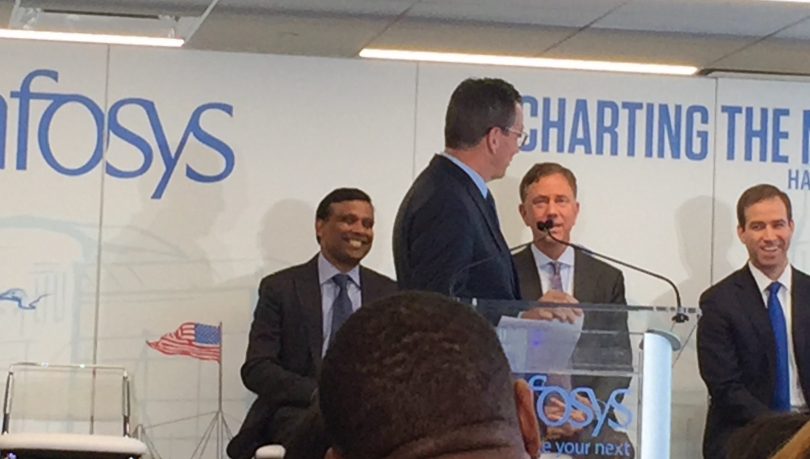 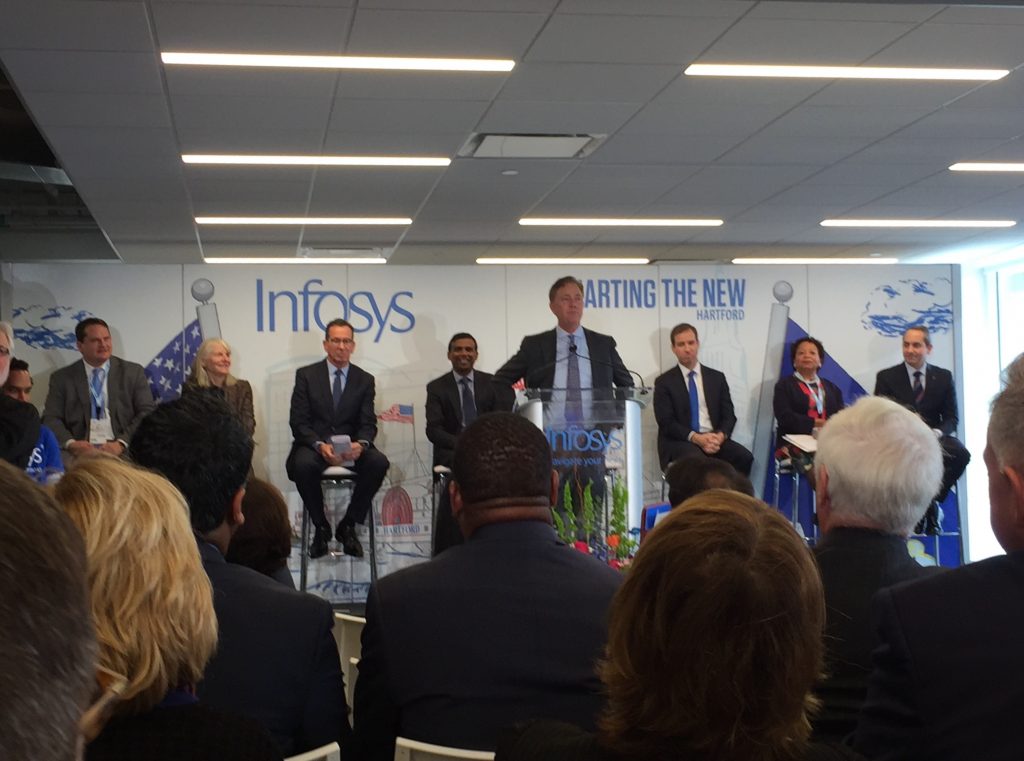 Gov. Ned Lamont speaks at the opening of Infosys in Goodwin Square in Hartford on Wednesday. Photo credit: Ronni Newton

Infosys, a global information technology company in the midst of a U.S. expansion, formally opened its new technology-and-innovation hub in downtown Hartford on Wednesday, affording both Gov. Dannel P. Malloy and Gov.-elect Ned Lamont a chance to take a bow for their roles in landing the company.

Ravi Kumar, the president and deputy chief operating officer of the India-based Infosys, took Lamont on a tour of the company’s hub on the 11th floor of Goodwin Square, a series of open work spaces with floor-to-ceiling white boards for walls. Infosys has finished work on the first of three floors it has leased in the 30-story tower.

“Ned was the first person who brought me here,” Kumar said of Hartford.

“I was so reluctant to come to come,” Kumar said. “Then I find, what to call it, a hidden jewel.”

Lamont met Kumar two years ago, introduced by a mutual acquaintance, Indra Nooyi, then the chief executive officer of PepsiCo. Nooyi graduated with Lamont from the Yale School of Management in 1980 and, like Lamont, lives in Greenwich. Lamont introduced Kumar to Catherine Smith, the commissioner of economic development.

Infosys was changing its business model, stepping away from a consulting business that often involved moving technology jobs offshore or flying in Indian workers on temporary visas. Five years ago, the company paid a record $34 million fine to resolve what the U.S. Justice Department alleged was the fraudulent use of temporary visas.

Smith and Lamont recalled an early meeting at Cantor Coburn, an intellectual-property law firm in Hartford. Michael Cantor, a West Hartford resident who is co-managing partner, opened the firm’s office to what turned into an intense campaign to woo Infosys by the Malloy administration, assisted by Mayor Luke Bronin and top corporate leaders of The Travelers, Cigna, Stanley Black & Decker, Hartford Healthcare, and others.

Lamont, a cable-television entrepreneur whose wife, Annie, is a venture capitalist, has promised to use the couple’s network of business contacts to bring new talent to state government and convince other businesses that Connecticut is a good place to locate, despite its low rankings in many assessments of state business climates.

In March, the Malloy administration closed a deal with Infosys: If its hiring in Hartford reaches 1,000 by 2022, the company will be eligible for up to $12 million in grants, as well as $2 million in training funds for establishing partnerships with local education institutions. Infosys will invest $20 million.

“This is a really good day on top of lots of other good days that we’ve had in the last year,” Malloy said. “I’m happy that Gov. Lamont will have the wind at his back.”

Malloy took office in January 2011, less than a year after the end of a recession that cost Connecticut nearly 119,100 jobs. The private sector has grown by 127,600 jobs since the recovery began, but the government sector has shrunk, so the net gain is 107,700.

Joanne Berger-Sweeney, a neuroscientist and president of Trinity College, was among the speakers at the opening Wednesday. Trinity is one of the area colleges developing working relationships with Infosys, which hires liberal arts graduates into training programs.

“If you look at talent which is available in the market, you would think there isn’t enough,” Kumar said. “Then if you go to schools and look for talent, then you think there is plenty available – so long as you invest in them.”

Bob Stefanowski, the Republican gubernatorial nominee, criticized both Malloy and Lamont for the Infosys deal, saying during a debate that Infosys had no intention to hire to U.S. workers. Kumar on Wednesday shrugged off the episode, saying that campaign was over.

Kumar said Hartford was chosen as a hub because of its proximity to target markets of insurers, hospitals and other other health care providers, and advanced manufacturers. Another major factor, he said, was the willingness of Trinity and other schools to work cooperatively to deliver employees.

Kumar said the company “co-creates” digital products and services with its clients.

“If you walk around this office, you are going to see a lot of digital technologies. You have to work along with your clients to co-create and innovate,” he said.

“Close to the client teaches you a lot because the technical skills required change over the course of five, ten years,” Lamont said. “That’s one of the great things Infosys brings to the table. They continue to upgrade the skills of the folks they are bringing to these clients, so they are symbiotic.”