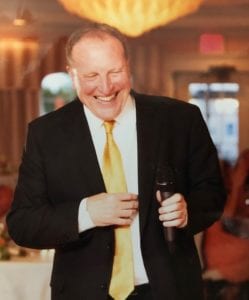 Jack Phelan, a West Hartford resident who had been the Farmington High School athletic director for the past 17 years, died Monday.

Phelan, a natural athlete who grew up on Oxford Street in the West End of Hartford, was a basketball star at Northwest Catholic High School in West Hartford, graduating in 1972. He spent a year at Saint Thomas More Prep School before attending Saint Francis University (PA) where he excelled on the basketball court.

After graduating, he was drafted not only by the NBA’s Golden State Warriors in the sixth round, but also by the Pittsburgh Steelers – despite having only played a year of high school football.

Following brief stints in the NBA and NFL, according to his obituary Phelan gravitated to his first love – coaching – beginning as a graduate assistant at Niagara University.

He became an assistant basketball coach at Fairfield University, and in 1981 was hired by the University of Hartford as head coach of the mens basketball team, a position he held from 1981-1992. He led the team during the time the transition from Division II to Division I for the 1984-85 season.

“This is heartbreaking news,” John Gallagher, who has been head coach of the University of Hartford mens team since 2010, said Tuesday in a statement. “Jack was Hartford. He was tough, hardworking, caring and gritty, which are all qualities that resemble our great city. He was also a great family man. Our thoughts and prayers go out to his wife, Patti, and their three sons, Kenny, Jack, and Patrick. Jack left a legacy both on and off the floor that will be felt in our program for generations to come.”

For the past 17 years, Phelan has been the athletic director for Farmington High School.

“He loved this position and made many meaningful and lasting friendships there,” his obituary states. “He loved the students in the high school and wanted them to experience the joy of sports that had enriched his entire life. Jack was a mentor to more people than could be counted. Colleagues and friends looked to him for career advice and college recommendations for their children. Jack knew everyone. Jack made everyone around him feel important. He had a knack for names and remembrances from years past. His storytelling skills were second to none.”

Phelan is a member of both the Northwest Catholic and University of Hartford Hall of Fame, and last year was inducted into the Saint Francis University Hall of Fame.

“People come into your life for a reason, a season, or a lifetime,” Vin Baker, a member of the Hartford mens basketball team in 1989-93, said in a statement Tuesday. “Coach Phelan touched all of these moments of my life.”

According to his obituary, Phelan “was predeceased by his parents, Marian and Kenneth Phelan and his older brother Kenneth G. He is survived by his wife of 41 years, Patti and his three sons and their wives, Ken and Lisa (Weber), Jack and Courtney (Krzyzek) and Patrick and Mckenzie (Kelly). He leaves the lights of his life, his five grandchildren, Finley, Alice, Emmerson, Evelyn, and Bennett. Jack is also survived by his sister Maureen and her husband Fern Richard, his brother-in-law and sister-in-law, Peter and MaryAnn Politi, and many special cousins, nephews and a beloved aunt.”

Phelan’s funeral will be by invitation only at the Cathedral of Saint Joseph, Hartford, and he will be buried at
Mount Saint Peter Cemetery, 219 New Haven Avenue in Derby. A public memorial will be held at a future date.

The complete obituary can be found on the Ahern Funeral Home website.