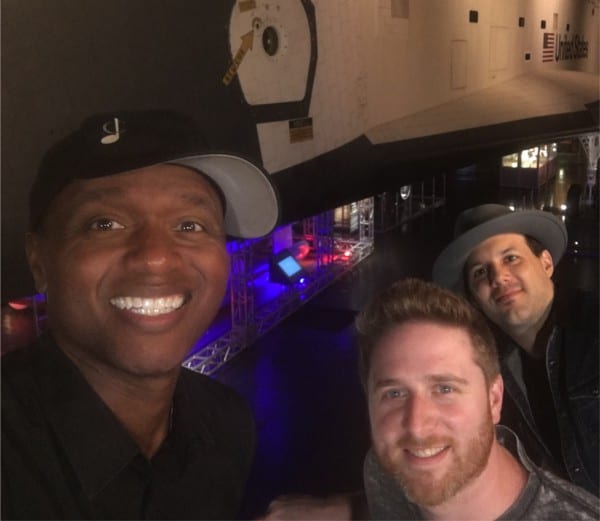 From left: Javier Colon, David Ladd, and Matt Cusson collaborated on a music video about the moon for NASA. Photo courtesy of CT by the Numbers

Javier Colon, a West Hartford resident and winner of NBC’s ‘The Voice,’ has collaborated on a music video about the moon for NASA, some of which was filmed locally at the University of Hartford and the CT Science Center.

It’s doubtful that anyone would have predicted that the trajectories of those two orbits would coincide. 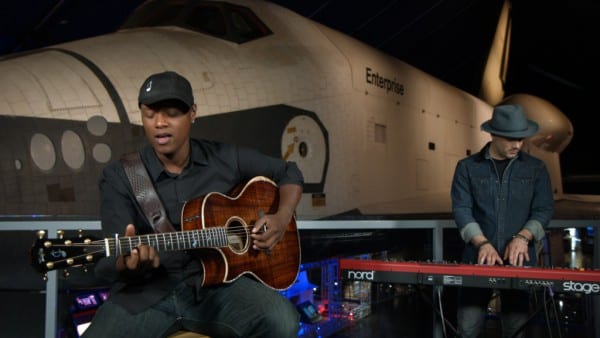 Javier Colon and Matt Cusson perform ‘The Moon and More’ in a video produced for NASA. Photo courtesy of CT by the Numbers

However, they have – with the release this month of a new music video co-performed by Colon, along with Matt Cusson. The new song, “The Moon and More,” was inspired by the Lunar Reconnaissance Orbiter (LRO) mission, and produced in collaboration with NASA’s Goddard Space Flight Center in Greenbelt, Maryland and veteran video producer/editor David Ladd.

Colon, who earned a Bachelor of Music in Music Education from the Hartt School at the University of Hartford, said: “This project brought me back to when I was a kid watching NASA launch the shuttle missions.  Every kid at some point wants to fly, and I think that dream has a lot to do with NASA’s exploration of space and discoveries.”

The song and music video focuses on the inspirational nature of studying the moon — the cornerstone to learning more about the solar system — and how LRO has ushered in a new era of lunar science. The mission is expected to relay more information about the lunar environment than any other previous mission to the moon.

The video appears on the NASA LRO website, and is available on You Tube, where comments have been overwhelmingly positive, and numerous space exploration websites. Filming locations included the Hartt School of the University of Hartford and Connecticut Science Center; the Intrepid Sea, Air and Space Museum in New York; the National Air and Space Museum in Washington, D.C.; and the “Living on Mars” mural in the Bronx, New York.

“I wanted to create a unique production for the LRO mission that centered around music as a way to engage kids, parents and educators,” said Ladd. “A major focus was also to convey an important and encouraging message to kids, particularly children of color – that nothing is beyond their reach. You can achieve the goals you set and take yourself to places you never thought possible – just as NASA has done in going back to the moon with LRO and its continued journey into the solar system.”

Ladd conceived of the project, and selected Cusson and Colon to write the song and perform the music.  The project came together with a strong sense of destiny. Ladd had heard Cusson’s music previously, through a mutual friend, and had been of fan of Colon’s since The Voice. When he contacted Cusson to gauge his interest, he learned that Cusson and Colon were friends, musically and otherwise. The connection was made, and Cusson and Colon set out to create a song that matched – or, as it turned out, exceeded – the story board that Ladd had in mind.

“I picked out five of each of their songs that I liked, and that I thought had a sound that would work. Then I let them have at it.” Ladd recalled. When he received the first rough videos from them of the words and music, his response was succinct: “This is perfect. Keep running with it.”

They did, and the song was completed earlier this year and debuted in recent weeks. Ladd hopes the song will boost awareness of the LRO, and transcend it. “Some have described it as the ‘Frozen’ of space exploration in its majestic feel. We hope it will have broad appeal, a song that you’ll enjoy on the radio, and be inspired by.”

From left: Javier Colon, David Ladd, and Matt Cusson collaborated on a music video about the moon for NASA. Photo courtesy of CT by the Numbers

Ladd explained that the casting in the music video, which features people of color (including members of the same family to highlight authenticity) was intentional, so that “kids that don’t always see themselves,” can better connect to the possibilities that science and exploration can offer.

The LRO mission team believes “The Moon and More” will have a lasting impact, adding a popular element to an array of education programs that are already part of the LRO mission. The LRO Lunar Workshops for Educators are an award-winning professional development program focused on lunar science and exploration for grade 6-9 science teachers, and programs for grade levels beginning with elementary school have been made available to teachers nationwide.

“It was exciting to have this chance to work with NASA,” said Cusson, a Pittsfield, MA native. “As a musician, you don’t usually think that this is something you could do. But I was honored to offer up my skills and music, and to bring the worlds of science and music together.”

“A number of us working on LRO have had something inspire us to pursue careers in science and engineering,” said LRO Deputy Project Scientist Noah Petro at Goddard. “This video serves as an opportunity to inspire future generations to follow their dreams into the sciences or the arts.” Ladd expressed appreciation for the supportive efforts of both the Hartt School and the Connecticut Science Center, and indicated that some of the videos best segments were filmed at the Connecticut locations.