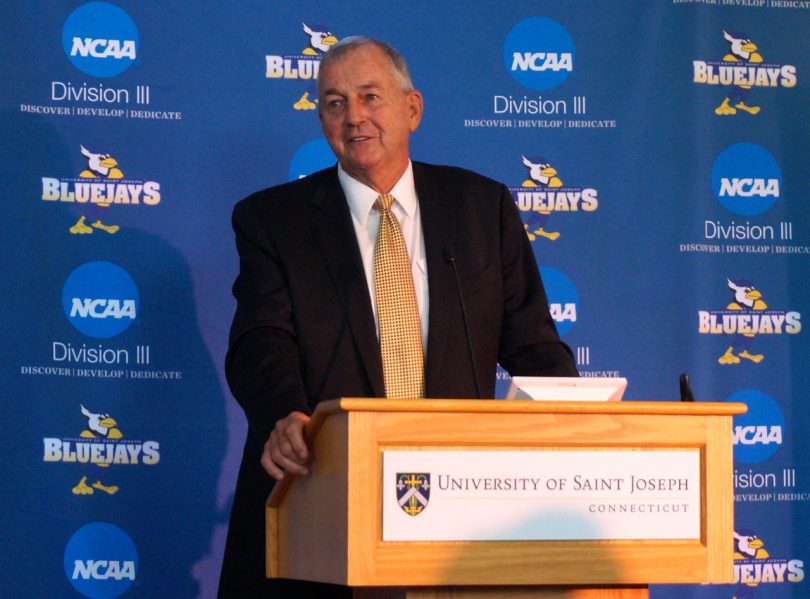 Hall-of-Fame basketball coach Jim Calhoun will soon be spending a lot of time in West Hartford as he immediately begins his new consulting role, tasked with the job of building the University of Saint Joseph’s (USJ) first-ever men’s basketball program from scratch.

Calhoun appeared at a press conference Thursday morning with USJ President Rhona Free, Athletic Director Bill Cardarelli, explaining why he made the decision to come out of retirement to join the Division III program. 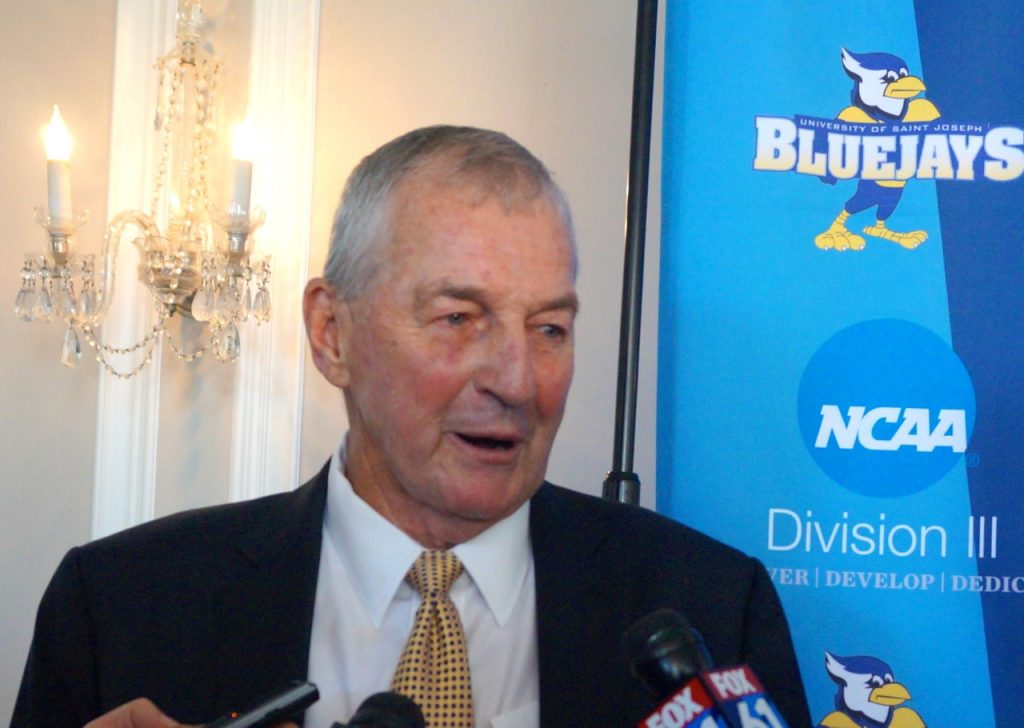 Jim Calhoun was formerly introduced Thursday as the a consultant to the new men’s basketball program at the University of Saint Joseph in West Hartford. Photo credit: Ronni Newton

Calhoun, 75, retired from the head coaching job at UConn in 2012, turning over the reins to Kevin Ollie. But in addition to a part-time job with ESPN, he has remained a state employee and will continue be an advisor to UConn.

Rumors of Calhoun getting involved with the USJ program began circulating over the summer, but he didn’t officially accept the position until he worked out the arrangement with UConn, one he said in the future will be considered on a year-to-year basis.

Calhoun said that because of his obligations to UConn, he will be working at USJ part time as a consultant for now, “but not part time always in my mind,” he said.

“I love the Huskies and I’ll always be a Husky,” but there’s room for more love, Calhoun said Thursday.

“I love the game. I love the kids,” Calhoun said. He said he is thrilled to be here.

Free said that after the decision was announced in June 2017 that USJ to go co-ed in the fall of 2018, she met with Cardarelli. “I’d really like to make a splash with men’s athletics,” she said she told him, to make an investment in the University’s future.

“I asked Bill to go out and find me the best people possible, and I’m thrilled. He far exceeded even my greatest expectations,” Free said of Calhoun’s hiring.

USJ will begin admitting men as undergraduates in the fall of 2018, and in addition to basketball will introduce men’s teams in soccer, cross country, swimming and diving, and lacrosse.

Cardarelli has known Calhoun for more than three decades, and said he sought his advice about building a basketball program. “The more I talked to him, the more I listened to him … there’s no one in the country better than Jim Calhoun to have built a program,” Cardarelli said.

Cardarelli said he asked Calhoun if he missed coaching. “And all of a sudden he looked at me and he didn’t say a word,” Cardarelli said, so he asked if Calhoun would join USJ, to help build a men’s program. Calhoun’s response: “I’m intrigued.”

Calhoun said his first tasks will including learning some things about DIII, and learning about this “wonderful place, this incredible location.” He said his family members already really like Blue Back Square and West Hartford Center.

But what he really is looking forward to is coaching. “I terribly miss the coaching on a daily basis, I miss the association with the kids.” Glen Miller, his former assistant at UConn, will join him at USJ, Calhoun said.

Calhoun said that winning is the greatest thing, but he’s really here because he loves the game and he loves the educational process. “Nothing can stir me … like that great effort that kids give.”

He said he doesn’t care who the kids are playing against. “I’m incredibly happy to be here to help build a foundation for the program and that’s what I’m doing right now,” Calhoun said. There’s a lot of work to do, he said, getting a laugh from the crowd when he mentioned the facilities.

Recruiting will be the first major task, and a way to bring a spotlight to the wonderful things that are happening at USJ. “I expect around 2 or 3 o’clock today I’ll be in a gym someplace looking at future Blue Jays.”

Calhoun said he would start the recruiting process locally, but has already received a couple of texts from Israel. “I’ve got a lot of coaches that have called me about kids they have,” he said. And while he would be open to a team of players from the area, “if other kids want to come here … if a 6-foot-8 player wants to cross the state line, we’ll take him,” Calhoun said.

“Starting from scratch” is exactly what he will be doing at USJ. “You make a basket, you hold the all-time scoring record,” he said.

“I feel very comfortable here. I love the mission of the University and I think I can make a difference in kids’ lives … that’s hands on.”

Following the press conference Free said that Calhoun is known to people around the world. But more than being able to put USJ on the map, she said his joining USJ is “a symbol of our commitment that really will make a mark with students in high schools everywhere. I think it’s really important to have him here but I think it’s equally important as a symbol that we’re going to bring in the best people possible, we’re going to build the best program possible.”

Free knows what athletics can do for a university, Calhoun said to reporters after the press conference. “This is a great opportunity, as it goes co-ed, to do something special.”

Calhoun said he looks forward to becoming more a part of the West Hartford community, where he already has relationships and a ton of friends. He said he thinks having a small Division III program in the community to support will be a positive thing.

“He mentioned the location as being one of our key assets, and I agree,” Free said. “This is such a fabulous community for students to be able to be at school in West Hartford … it’s such a beautiful place,” Free said. 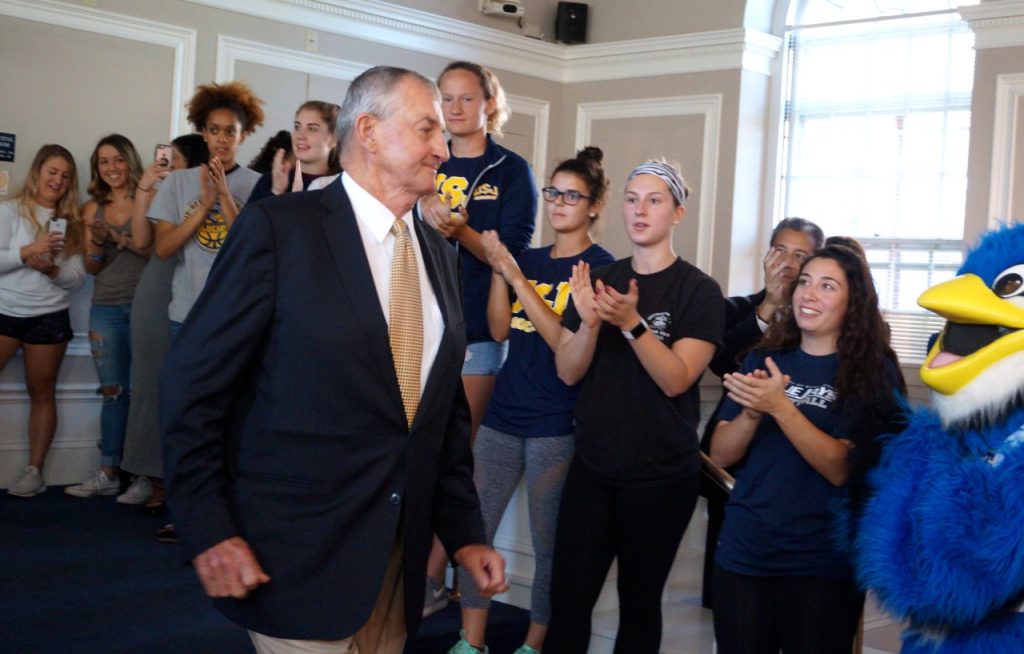 Student-athletes clap and the crowd rises for a standing ovation as Jim Calhoun enters the room. He was formerly introduced Thursday as the a consultant to the new men’s basketball program at the University of Saint Joseph in West Hartford. Photo credit: Ronni Newton 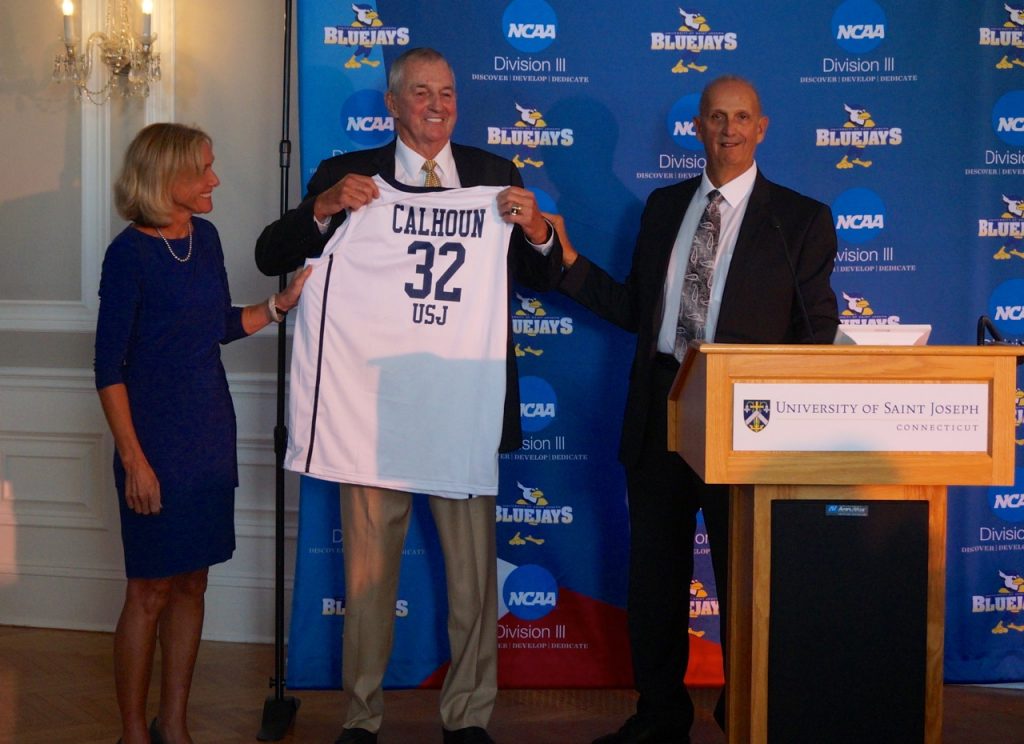 USJ President Rhona Free (left) and Athletic Director Bill Cardarelli (right) give Jim Calhoun his own USJ Jersey. The Hall of Fame coach was formerly introduced Thursday as the a consultant to the new men’s basketball program at the University of Saint Joseph in West Hartford. Photo credit: Ronni Newton 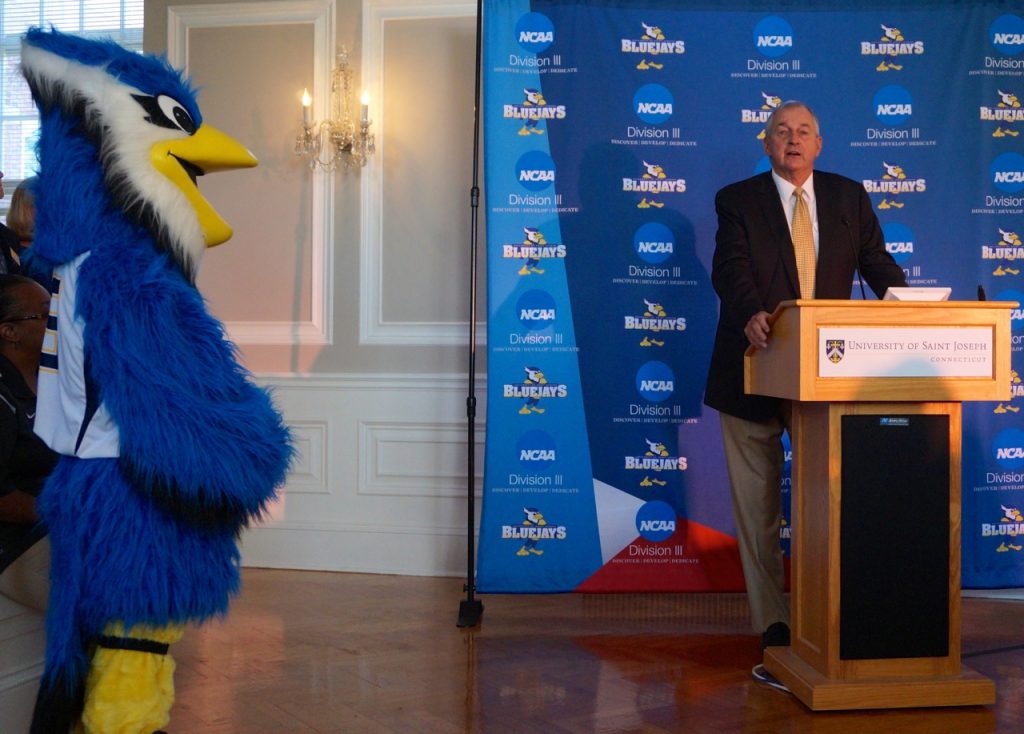