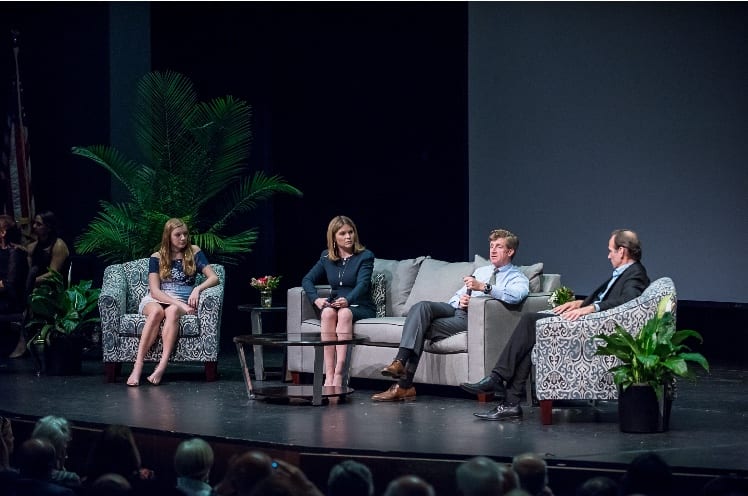 Patrick Kennedy, Jenna Bush Hager, and a local high school student held an open dialogue Thursday in West Hartford to continue the conversation about mental health and raise awareness for mental illness by sharing their own encounters and struggles with depression, substance abuse, and family experiences. 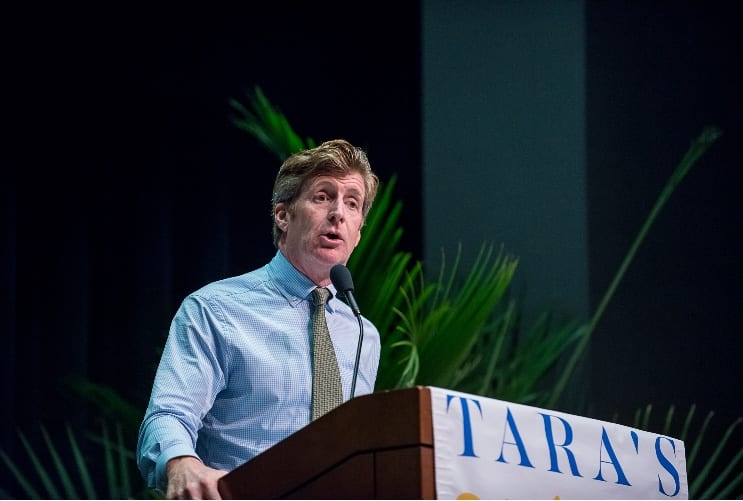 A crowd of nearly 600 people filled the Roberts Auditorium at Kingswood- Oxford School in West Hartford on Thursday evening to attend a sold-out event in honor of Mental Health Awareness Month.

Jewish Family Services and Tara’s Closet co-hosted their second-annual presentation titled “Embracing Possibility for Mental Health Awareness: A Conversation with the Honorable Patrick J. Kennedy,” featuring NBC “Today” contributing correspondent Jenna Bush Hager as a special guest and moderator and a testimony from a local high school student, Jenna Polidoro, about her battle against depression and her road to recovery.

“It seems like the statistics keep getting worse,” said Hager in regards to mental illness as she opened the evening’s events and emphasized the importance of continuing the conversation about mental health.

Throughout the night, each of the speakers shared their own encounters of the battles either they or their families experienced with mental illness. In addition, in an open dialogue with Hager, Kennedy, a former congressman from Rhode Island, discussed an aggregate of issues including his own testimony, early intervention for mental health screening, and the opioid epidemic.

“It is time to embark on a new medical civil rights fight,” said Kennedy addressing the current political issues with medical treatment for mental health and illness. According to Kennedy, who is a leading voice in national mental health awareness, people should “receive comparable levels of care at the primary, secondary, and tertiary levels that you received for any other illness.”

Although laws have been put in place to lower treatment costs for mental illness, Kennedy explained that one of the biggest issues in overcoming mental illness is non-quantitative issues including medical management practices that allow insurance companies to determine the appropriate treatment, which has been a difficult obstacle to overcome in the fight for equal treatment.

Kennedy advised that it is time for a cultural change and individuals can do their part in advocating for mental illness through education, early interventions and screenings. Both Hager and Kennedy emphasized the importance of proper mental-health education at an early age.

Kennedy advised that parents help their children become emotionally and socially educated by changing the dialect of mental health. By using terms like “emotionally intelligent” and “mentally fit,” he said it would empower children from a young age to recognize the importance of their own mental health.

Dr. Evan Fox, the Assistant Medical Director of the Institute of Living at Hartford Hospital said, “We can all learn” about mental illness, too.

Hager, who opened the evening with a touching story about her sister, Barbara Pierce Bush, from their co-written book “Sister’s First,” asked Kennedy how he feels about “owning his story.” Kennedy replied by reflecting back on a time where he “could not go anywhere without his disease,” which was his battle with addiction.

Addressing the stigma surrounding mental health, Kennedy said, “there is a painful notion that [mental illnesses] are shameful,” and added that it is easier to shut people out.

Jenna Polidoro, a student at Suffield Academy, also shared intimate details about her battle against depression. Polidoro, now a senior in high school, said that she had been struggling with depression since she was a freshman, but was only diagnosed with depression a few months ago.

As an athlete playing water polo for both the men’s and women’s teams at her high school, Polidoro said, “I felt like I was letting everyone and myself down,” after her times had declined as a result of an illness she contracted. She said that her mental health had declined to a breaking point and she needed help.

During an audience-driven Q&A forum, Hager, Fox, Kennedy, and Polidoro offered insight on recovery. Kennedy said, “People are in recovery for the rest of their lives.” He also added that the biggest medicine in mental illness is reaching out to others.

As the event came to a close, each of the speakers was given a parting gift of a rock. The rocks, which all of the attendees had received upon arrival, are known as JFS Rocks. They symbolize strength and solidarity by alluding to ancient values of the Jewish faith, and they are used as an initiative to spread positivity as well as other Jewish values including honor, respect and kindness and bring awareness to mental health conversations. 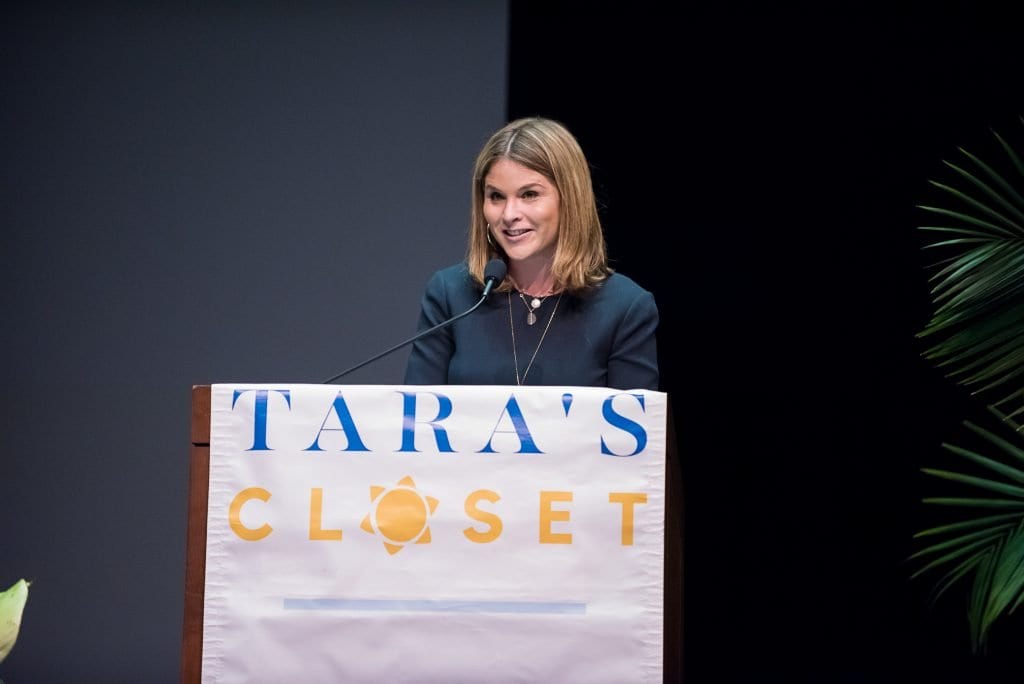 Jenna Bush Hager was moderator at a mental health forum in West Hartford on May 17. Photo credit: J. Fiereck Photography 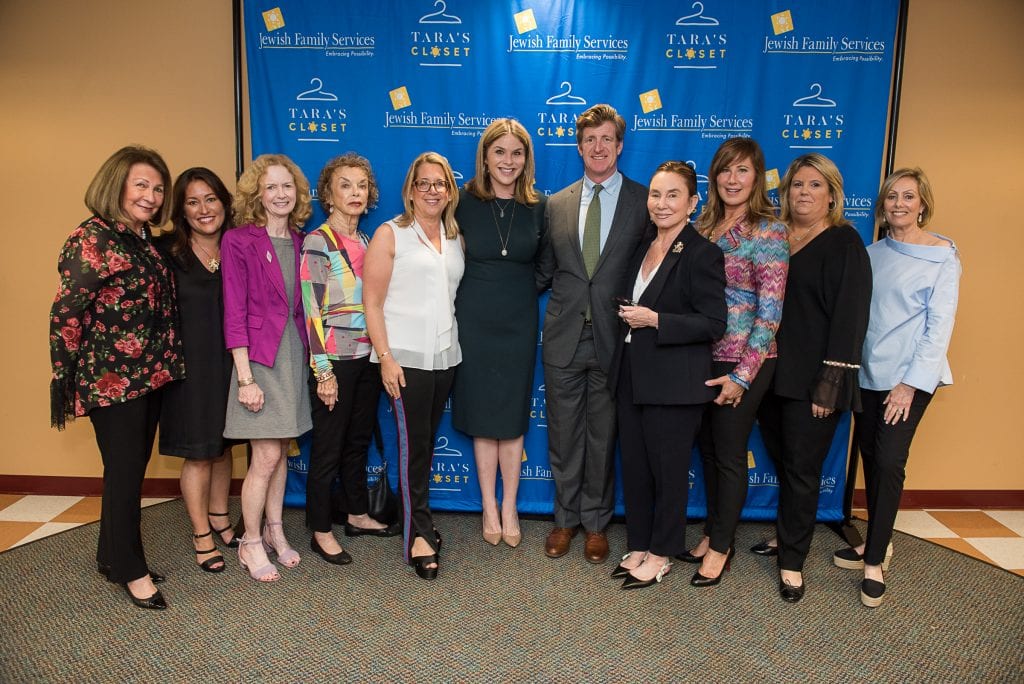