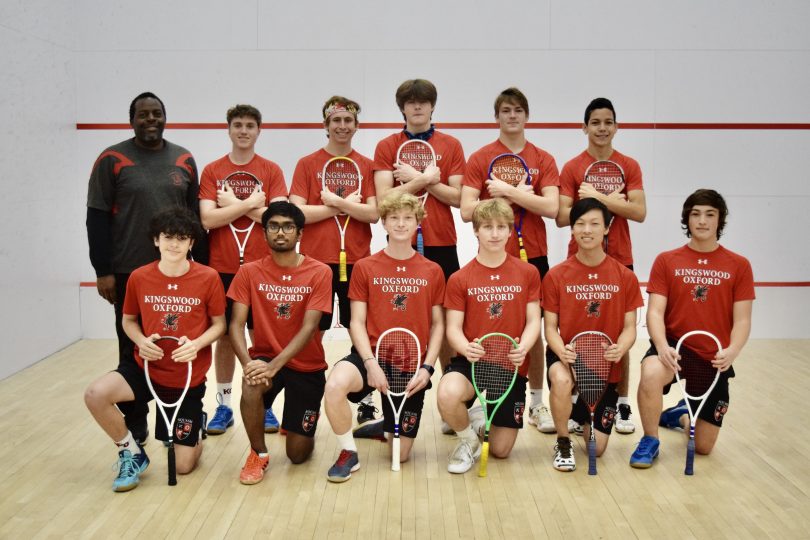 The varsity squash team from West Hartford’s Kingswood Oxford School headed to the national tournament after a victory at the New England Class C Championship.

KO boys varsity squash has a whopping nine seniors spearheading the competitive ladder, and the team’s leadership, experience, and prowess on the court fueled them to a New England Class C Championship victory on Feb. 13. The Wyverns’ overall record glows at 12-2, and they ride a seven-match win streak as they headed into Nationals this past weekend.

After a lengthy hiatus from competition that derailed the 2021 season, the team was eager to make a statement and did so rattling off five consecutive wins to open the campaign. Three of those were convincing 7-0 shutout wins against Williston Northhampton School, Suffield Academy, and Portsmouth Abbey School.  The two others were gutsy 4-3 nailbiters against Westminster School and the Winged Beavers of Avon Old Farms that showcased a high level of play from all involved. Senior co-captain Henry Pelletier has been tremendous in the No. 1 spot for the Wyverns and at the time believed the team was in great form with the ability to keep the momentum rolling.

“Our season is off to a great start,” Pelletier said. “We’ve taken down some very strong opponents and are looking to [build upon] our [winning] record.”

The experienced group tasted defeat for the first time against Choate Rosemary Hall by a score of 6-1 on Wednesday, Jan. 19, followed by another 6-1 loss on Saturday, Jan. 22 against one of the premier squash programs in New England, Kent School. Seventh-grader Cole Keegan shined at the No. 6 spot against the Lions and was the lone victor that afternoon.

With a cleared rearview mirror and optimism for desired results ahead, the Wyverns got back in the winning column on Wednesday, Jan. 26, cruising to a 5-2 triumph over Loomis Chaffee School. The black and red yielded a perfect 6-0 record at home, comfortably defending “the den” and giving every opponent a run for their money.

Head Coach Robby Lingashi has done an incredible job making sure the team is adequately prepared for every match and instilling his wealth of knowledge and passion for the game to his players.

“Robby has always been a great coach to us,” Pelletier said. “He combines conditioning and specific technique training to make sure we’re playing as well as we can. He also keeps the ladder accurate by having us do challenge matches before every match.”

One of Lingashi’s other skilled veteran players this season is senior co-captain Aidan Dillow, playing in the No. 2 position. He was thrilled to be recognized as one of the leaders after two previous years with the varsity team, and, like his teammates, is aiming high to go out on top when all is said and done.

“We hope to win Nationals,” Dillow said. “We have a real shot this year, and beating really good teams like Avon Old Farms and Westminster gives us the confidence that we can do it.”

On the weekend of Feb. 12 and Feb. 13, the Wyverns made their long-anticipated title defense of the New England Class C Championship at the Portsmouth Abbey School in Rhode Island. They faced a familiar foe in the quarterfinals, Avon Old Farms School, and won handily by a score of 5-2. Highlights of the match included straight-set wins by talented seventh-grader Will Keegan, freshman Jack Krieble, and senior Carter Smith in what was an exciting afternoon.

Without adequate rest or time to recover, the black and red were back at it the evening of Saturday, Feb. 12 against another opponent they had seen already this season, Loomis Chaffee School. In identical fashion to their matchup nearly three weeks prior, the Wyverns steamrolled the Pelicans 5-2. Dillow, Krieble, and Keegan cruised to victories in straight sets while senior Teddy Keegan won 3-2 in a close matchup against a formidable opponent, all propelling the team to the finals on Sunday, Feb. 13.

The resilient group took on the Dragons of St. George’s School in a quest for glory and clinched the title with another convincing 5-2 win. The Wyverns successfully defended their New England Class C Championship with another shutout victory from Krieble as well as victories from T. Keegan, Smith, Dillow, and senior Teddy Schwartz. Pelletier, a Connecticut College squash commit, was ecstatic to win his second title as a member of the team and immensely proud of the team’s performances in each match.

“We played very well as a team,” Pelletier said. “Jack Krieble has been a rock at No. 5, always pushing us to victory by winning his own match handily. [Coach] Robby was giving us plenty of motivation to win our matches while giving us lots of specific tips to overcome our opponents. I, along with co-captain Aidan Dillow, made sure the boys were always in the right state to play a match by giving the rest of the team pre-game speeches.”

The Wyverns hoped to cap off their remarkable season with an impressive finish at Nationals in The City of Brotherly Love, Philadelphia. Kingswood Oxford wishes the nine seniors the best of luck as they venture into new endeavors, and they will forever hold a place in the KO record book as two-time New England Class C Champions.