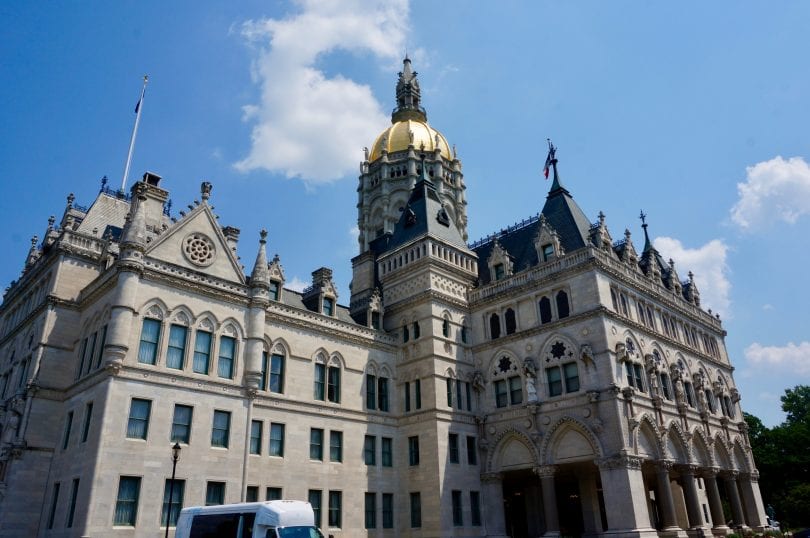 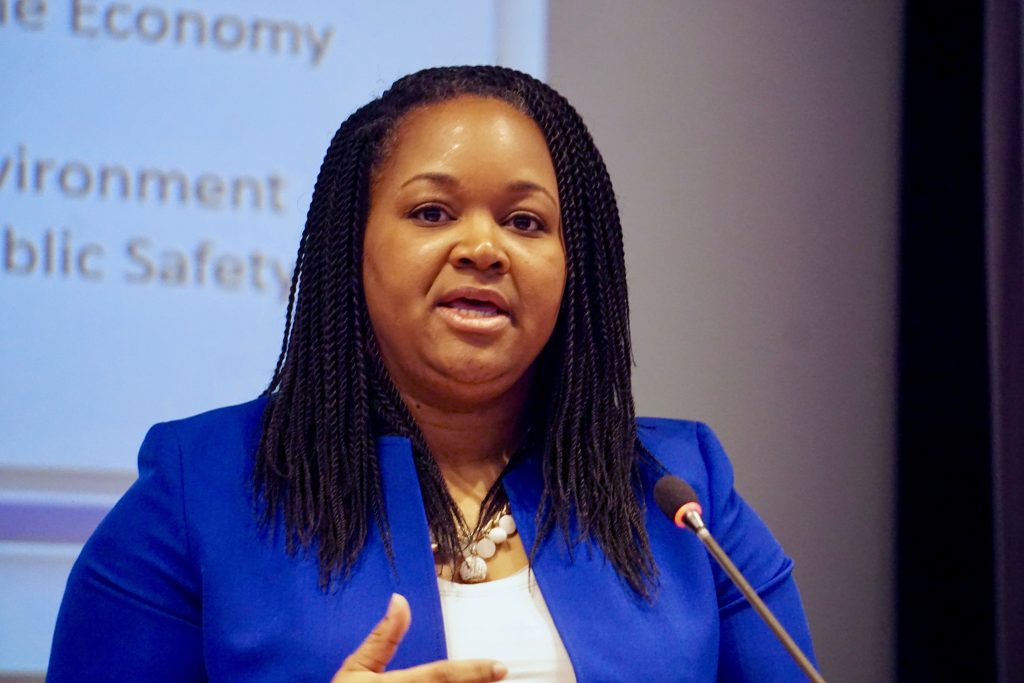 The plan, which focuses on job creation, would raise revenue by canceling $28 million in previously approved tax relief for Connecticut businesses, by creating a tax amnesty program for certain insurance companies and by establishing a new surcharge on those who pay state taxes, fees, and other charges with a credit card.

It also would raise the new state tax on vaping while banning flavored products, including menthol, and tighten eligibility for the state’s new debt-free community college program.

“The budget you have before you today is financially responsible and pro-growth,” Office of Policy and Management Secretary Melissa McCaw, Lamont’s budget director, said during a mid-morning briefing.

The budget does not fulfill Lamont’s 2018 campaign pledge to provide $165 million in new income tax relief for low- and middle-income households. The administration claims Connecticut cannot afford the relief at this time, even though fiscal projections for the 2020-21 fiscal year are better now than they were when Lamont made the pledge two years ago.

The latest budget proposal would grow General Fund spending in the 2020-21 fiscal year by 3.7% over the current year, which is a 0.6% increase over the preliminary 2020-21 budget the governor and lawmakers approved last May.

Most of this new spending would cover rising state employee health costs, larger-than-anticipated state pension contributions, a growing demand for Medicaid services, and a potential shortfall at the University of Connecticut Health Center.

Lamont’s budget increases aid to cities and towns, though some of that additional funding could hinge upon whether lawmakers approve tolls on large commercial trucks later this session.

Connecticut already enjoys a record-setting $2.5 billion rainy day fund, which currently represents 13% of annual operating expenses. But it still does not match the 15% level – or about $3 billion – cushion recommended by Comptroller Kevin P. Lembo and other fiscal watchdogs to safeguard state programs and tax rates against the next economic downturn.

By keeping spending lean and continuing to save a portion of state income tax receipts tied to investment earnings, McCaw projects the reserve would grow beyond $2.9 billion after the next fiscal year ends in mid-2021.

“Our successful efforts have resonated on Main Street,” Lamont said in his budget address. “Our budget provided predictability to those counting on it most; I have heard from school principals, city and town leaders, small businesses and families, all saying, ‘Finally, we can now plan for our future.’”

Just two years ago, Connecticut had almost no reserves, was still paying off its operating debt from the last recession, and had concluded three consecutive fiscal years in deficit.

A focus on job growth, but business tax relief is canceled

An equally important focus of the new budget, McCaw said, is to grow the state’s economy.

The plan reinvigorates the Office of Workforce Competitiveness to create a unified, statewide strategy for training and developing new workers. The budget adds about $700,000 for new staffing.

The governor also kept a pledge to establish a new “earn-as-you-grow” tax credit for businesses seeking to add jobs. Companies adding at least 25 new full-time jobs over two years, with income at or above 85% of the median household income, would receive a break. The program would be capped, meaning Connecticut would not provide more than $40 million in annual tax relief.

Connecticut Business and Industry Association President Joseph F. Brennan praised Lamont for taking steps during his first year in office to stabilize state finances. But Brennan also expressed disappointment that more than $28 million in tax relief pledged to businesses for the next fiscal year would be canceled or deferred in the governor’s plan.

Most of that relief involves a 10% surcharge on the corporation tax. For most of the past two decades, governors and legislatures have imposed surcharges that were designed to be temporary, but often were extended again and again.

McCaw said Connecticut cannot afford to provide the relief now, but the governor was not interested in simply postponing the expiration date yet again, so he recommended making the surcharge permanent.

“The governor feels very strongly that we should not make promises we cannot afford,” she said.

But Brennan disagreed, noting that the administration and Comptroller Kevin P. Lembo project a huge surge in state employees retirements in 2022 and 2023. This opens huge opportunities to reduce state employees, use technology to make services more efficient, and to cut costs, Brennan said.

“We will hopefully have an opportunity to reduce taxes” in a few years, he said.

Brennan added that while the administration wants to grow jobs, deferring tax relief year after year only increases business leaders’ fears about the stability of state finances.

“I don’t know that people are going to pass out from shock” from this proposal, he added, “”but this does not help.”

Businesses weren’t the only ones who were expecting tax relief yet came up short.

The Democratic governor’s argument that income tax relief is unaffordable for low- and middle-income households at at this time didn’t sit well with Senate Minority Leader Len Fasano, R-North Haven.

“I wish we saw something to ease the pain of the people living in the state of Connecticut,” Fasano said.

Fiscal conditions in the state government now are better than when Lamont made his pledge on the gubernatorial campaign trail in August 2018, and Fasano said the bipartisan state budget crafted in the fall of 2017 is largely responsible for that.

That plan established tighter caps on spending and borrowing and established other controls to force the state to save a portion of annual income tax receipts tied to investment earnings when economic times are good.

McCaw noted that the governor’s budget does maintain other tax relief, in this case pledged to Connecticut’s retirees. This expands the income tax exemption for a portion of pension and annuity earnings. While 14% was exempt in the 2019 tax year – which involves returns being filed in early 2020 – the exemption grows to 28% for the returns households will submit 12 months from now.

That relief, however, also was originally approved in the bipartisan budget of 2017.

Connecticut cities and towns fared well in Lamont’s budget, though a significant portion of that additional aid comes with an asterisk.

The governor’s budget continues an ongoing, eight-year effort to grow the state’s largest grant to municipal school districts. The third year of that phase-in would begin July 1, and Lamont recommends staying with a schedule that would give communities nearly $40 million extra in Education Cost Sharing funds.

That amount is slightly higher than the FY2021 allocation the state approved last year, Town Manager Matt Hart told We-Ha.com. The overall increase for West Hartford is attributed to a small bump in ECS and adult education funding.

“The governor has pretty much endorsed the budget adopted last year with a little bit more,” Hart said.

“We appreciate the administration’s support for our municipal aid. It’s a very critical funding source for communities like West Hartford,” Hart added.

Lamont also proposed an additional $32 million for a grant that helps communities pay for capital projects. But that proposal’s future is somewhat murky.

Unlike ECS, the capital projects grant is paid for with borrowed dollars, rather than out of the state budget.

And Lamont has refused to sign off on a bond package – a series of projects and programs to be paid for with borrowing – for this fiscal year or for the next one, until legislators agree on a long-term plan to finance transportation improvements.

Lamont, who favors tolls on large, commercial trucks, says that if legislators won’t back this, then Connecticut’s bonding program may have to be radically altered. More specifically, he says other major priorities paid for chiefly with bonding, such as municipal school construction grants and capital projects at state universities, might have to be scaled back so that Connecticut can borrow more to fund transportation improvements.

So the extra $32 million proposed for the bonded capital projects grant could go away if tolls aren’t adopted.

“We feel fairly good about the initial things we’re seeing,” Joe DeLong, executive director of the Connecticut Conference of Municipalities, said Wednesday, adding his office still was reviewing the budget.

McCaw noted that the plan makes no cuts to social services nor to health care providers. But it also lacks any additional operating funds for the community-based nonprofits that provide the bulk of Connecticut’s social services.

Since 2002, state spending for nonprofits has grown by about 10%. After adjusting for inflation, nonprofits say they have lost money.

The CT Community Nonprofit Alliance projects it would take an extra $462 million per year to make them whole. They recently asked the governor and legislature to gradually increase funding over the next five years for an average of about $92.4 million extra per year.

Rep. Cathy Abercrombie, D-Meriden, a veteran member of the Appropriations Committee, said that while the administration and legislature deserve credit for rebuilding the state’s reserves, it’s hard to justify flat-funding for nonprofits that are struggling to handle growing caseloads and already serve thousands of poor, disabled and other needy residents.

“We can’t forget about the people that we represent,” Abercrombie said. “Nonprofits need to be a priority.”

Lamont did propose $25 million in additional bonding for a grant program that helps nonprofits cover their capital expenses.

Though Lamont has said he will support legalizing recreational marijuana use and taxing cannabis sales, the new budget does not assume any revenue from this initiative.

The governor proposes that no sales occur before July 2022. In the interim, the Department of Consumer Protection and the state’s Equity Commission would study the challenges of legalization and make recommendations for implementation to the 2021 General Assembly.

Other components of the governor’s new budget include:

Gov. Ned Lamont’s 2020-21 budget proposal provides an additional $38 million for the state’s primary education grant and makes only minor adjustments to the other municipal aid grants.

Click here for more details regarding Education Aid by town.