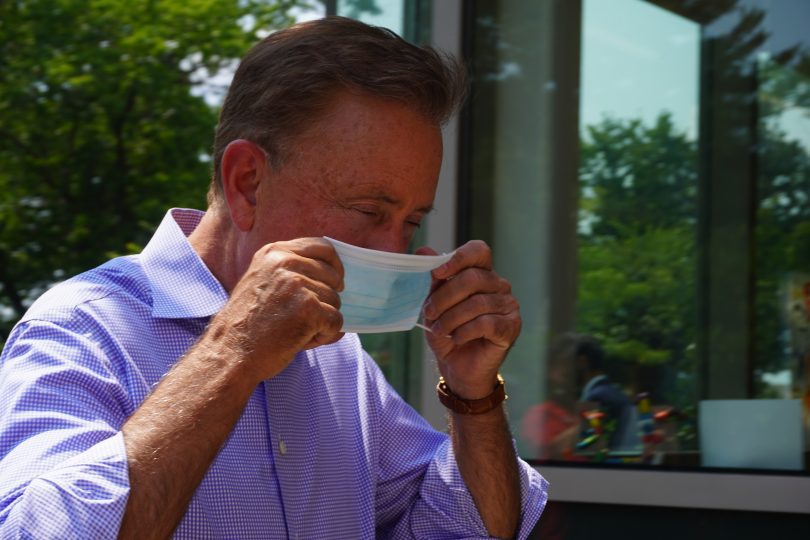 Local officials are able to set their own policies regarding masking in indoor places according to an executive order signed by the governor on Thursday.

The executive order does what Lamont has been talking about for the past week: gives local officials the ability to require masking in indoor public places in their cities and towns. Many had already decided to mandate masks at city halls and other local public buildings.

The local requirement to mask will apply to people regardless of vaccination status. It’s in lieu of a universal statewide policy.

The Town of West Hartford announced earlier this week that masks are now required to be worn in all public buildings. The new guidance did not apply to private businesses, but some have adopted new mask policies in the past week.

“Connecticut has one of the highest vaccination rates in the entire nation, and for that the residents of our state are to be applauded,” Lamont said. “That being said, there are some pockets of the state that are lagging behind others, and some leaders in those areas have requested the option of requiring everyone to wear masks until they can get their vaccination rates higher.”

Lamont said he continues to advise everyone to wear a mask inside in public locations, as recommended by the Centers for Disease Control.

In addition: “I urge everyone to get vaccinated because it’s the best thing you can do to protect yourself from this ongoing virus,” Lamont said.

Vaccination is not possible for children under the age of 12, but Lamont has been reluctant to issue a mask mandate for school children.

According to the press release, the state Department of Public Health and Department of Education are currently reviewing and, if necessary, updating statewide policies requiring masks in school. The updated policy will be available before the start of the upcoming school year.

Paul Liistro, the owner of nursing homes in Manchester and Vernon, said he plans to test any of his 350 employees who aren’t vaccinated. He said if they fail to show up for testing then they risk being terminated.

Masonicare, which operates many long-term care facilities in Connecticut, required its employees to be vaccinated by June 30.

Employers have wide discretion to mandate vaccination, but must allow for religious and medical exemptions.