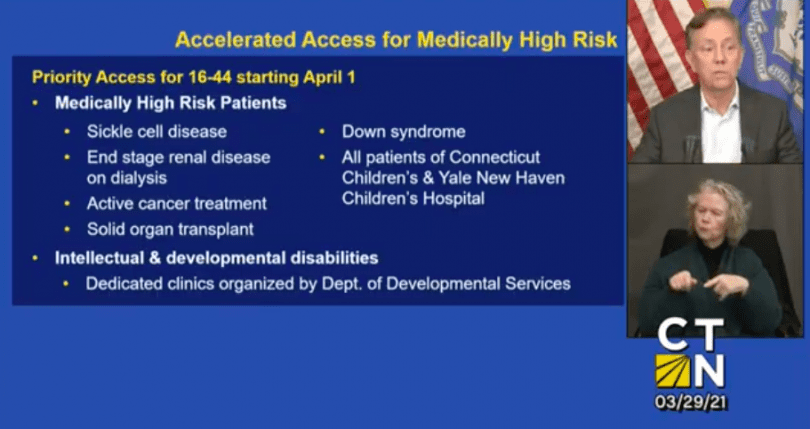 Connecticut residents with certain medical conditions, as well as residents with intellectual and developmental disabilities, will be prioritized when vaccination opens to all ages 16 and up on April 1. 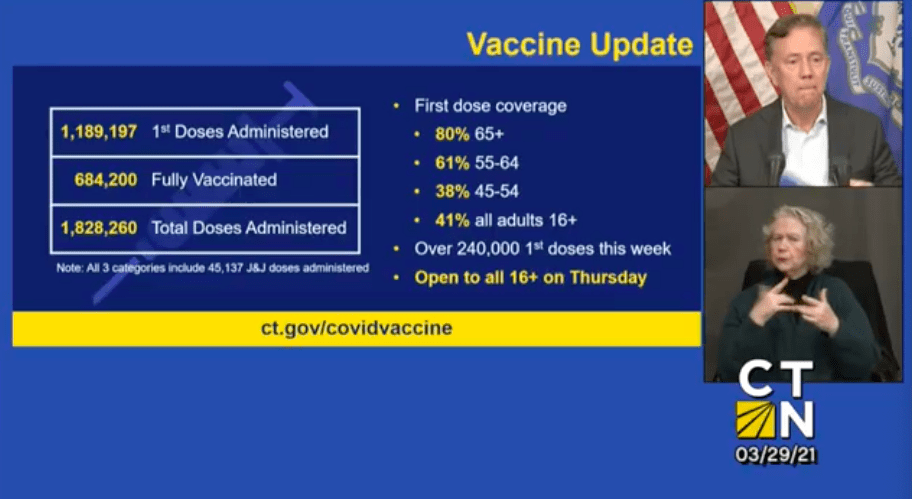 As Connecticut prepares this week to open access to the COVID-19 vaccine to everyone aged 16 and older, Gov. Ned Lamont outlined Monday plans to prioritize specific populations including people with certain medical conditions and developmental disabilities.

The state expects that around 600,000 newly-eligible residents will be seeking to make vaccination appointments Thursday when Connecticut discards its age-based restrictions on who can be vaccinated and opens the doors to everyone 16 and over.

But the Lamont administration discussed plans to prioritize vulnerable populations during a press briefing Monday.

One prioritized group will include people with certain pre-existing medical conditions. The list of ailments released by the state is less expansive than guidelines previously developed by the Centers for Disease Control and Prevention.

“‘How would you prioritize the riskiest conditions and I want you to reach out. We’re going to provide you additional vaccines as needed so you can take care of these people on a very timely basis,’” Lamont summarized the conversations with hospital officials.

Geballe said he expected that group of medically-prioritized patients to be relatively small at around 10,000 people. He said many people with vulnerable conditions had already been vaccinated because they were old enough to meet the state’s previous age-based thresholds.

“Some will do outreach directly to the patients in their system, give them some reserved appointment slots at their mass vaccination sites. Some others may do a dedicated clinic and some others may just look to vaccinate patients as they come through for their normal appointments over the next week or two,” he said.

Meanwhile, the state is planning 20 dedicated clinics for people with intellectual and developmental disabilities. The first two clinics are expected to take place on Friday. Geballe declined to say where they would be located. He estimated that around 9,000 residents with I/DD have not already been vaccinated. The clinics will take place over the next two weeks, he said.

“Invitations will be going out from [the Department of Developmental Services] to all of those families. They will need to sign up early. In many cases, we need to collect [parental consent forms]. That is already in motion,” Geballe said.

In a Monday email to supporters, The Arc Connecticut, an advocacy group for people with  intellectual and developmental disabilities, said it would be sharing details on the dedicated vaccine clinics with families.

“April 1st is later than we wanted. But it is a substantial improvement on the original plan that would have simply ignored the increased vulnerability of people with I/DD,” the group wrote.

Lamont also outlined plans to create dedicated clinics for high school and college-age students between late April and early May. College clinics are expected to use the single-shot Johnson & Johnson vaccine. High school clinics will be required to use the Pfizer-BioNTech, which is currently the only vaccine approved for emergency use on people between 16 and 18 years-old.

“Don’t forget about that age group,” Lamont said. “Even though they don’t suffer particularly dire consequences, they can be infecting” others.

The plans come as Connecticut’s COVID-19 indicators show some signs for concern. While the state’s infection rate has hovered near 3.5%, the number of people hospitalized with the virus has been climbing. On Monday, there were 498 COVID patients in Connecticut hospital beds. There were 389 just a week ago.

The governor said he expected the warmer weather and ongoing vaccination effort to have a positive impact on hospitalizations. As of Monday, 41% of residents 16 and over had received at least one dose of a vaccine.