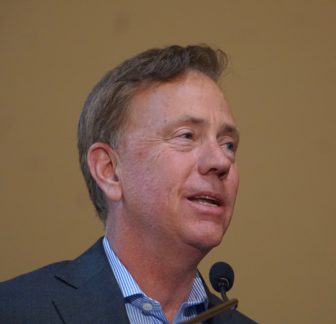 West Hartford Mayor Shari Cantor was one of several mayors who already wrote to the State Department regarding refugees.

Gov. Ned Lamont chided the administration of President Donald J. Trump on Wednesday in a letter affirming that Connecticut welcomes the resettlement of refugees as “a bedrock principle of the United States of America.”

The letter sent to Secretary of State Michael Pompeo is a response to an unusual executive order Trump issued in September that curtails the ability of the State Department to place refugees in a community without the consent of state and local officials.

“I think, more to the point, President Trump was giving some states the option of opting out as far as I could see it,” Lamont said, speaking to reporters after a climate change event where he also distanced himself from the president. “And again, like I talked about with the environment, I want Connecticut take the lead by example.”

No governor or mayor has a right to deny any legal resident, including refugees who enter the U.S. legally after extensive vetting by the State Department, from settling in their state or city, and Trump’s executive order is already being challenged in court.

“There is no basis for this. They have permanent legal status,” said Ann O’Brien, the director of community engagement at Integrated Refugee & Immigrant Services, the New Haven-based resettlement agency known as IRIS. “There is no legal precedence for this.”

Refugees represents a minuscule portion of the more than 35 million immigrants living legally in the U.S. Hardly a torrent before he took office, Trump has slowed their admission to a trickle, setting a ceiling of 18,000 in 2020 — the lowest in the history of the U.S. refugee program.

In Connecticut, IRIS helped resettle 530 refugees in 2016, 330 in 2017, 120 in 2018 and 269 in 2019, typically in partnership with a local church or other community institution, O’Brien said. They now live in 50 communities, ranging from the state’s largest cities to the small rural communities in the state’s Quiet Corner.

“It is literally a family here and there,” O’Brien said.

O’Brien said the president’s executive order places local officials in the middle of a debate over immigration, effectively challenging them to oppose or welcome their resettlement.

On Monday night, the Burleigh County Commission in Bismarck, ND, debated whether to become the first local government in the U.S. to formally deny its consent to refugee resettlement. Instead, it voted 3-2 after a packed public hearing to affirm they are welcome.

O’Brien wondered if a presidential order that invites communities to refuse refugees will have the the opposite effect.

“We are very optimistic this actually is going to backfire on them,” O’Brien said. “Every town is going to have to have some kind of conversation about this.”

The mayors of Hartford, New Haven, and West Hartford already have written the State Department consenting to resettlement in their communities, and IRIS welcomed Lamont joining them, O’Brien said.

“We are over the moon with the strength of Gov. Lamont’s statements,” she said.

In a formal statement released with his letter, Lamont cast the executive order as an element of a larger anti-immigrant campaign.

“Attacking immigrants and refugees does nothing to make our communities stronger, and in fact only achieves the exact opposite,” he said. “Connecticut will continue welcoming those escaping persecution and upholding the long tradition of the United States as a place that treats every human being with dignity and respect.”

Trump also signed an executive order in October barring the entry of immigrants who might be a financial burden to the health care system.

Trump has used costs to the U.S. as his rationale for limiting the admission of refugees, but a study by the U.S. Department of Health and Human Services found in 2017 that refugees produced more for the U.S. economy than they consumed. The White House rejected the study, according to the New York Times.

Lamont, a Democrat nearing the end of his first year in office, has been working with the Trump administration on a plan to finance transportation infrastructure in Connecticut, and generally has carefully chosen when he criticizes the president. But he did so twice in one day Wednesday.

In addressing a meeting of the Governor’s Council on Climate Change, Lamont said, “I think climate change is an existential threat. It’s a real threat, and if they don’t understand that in the White House, we understand it here in Connecticut.”