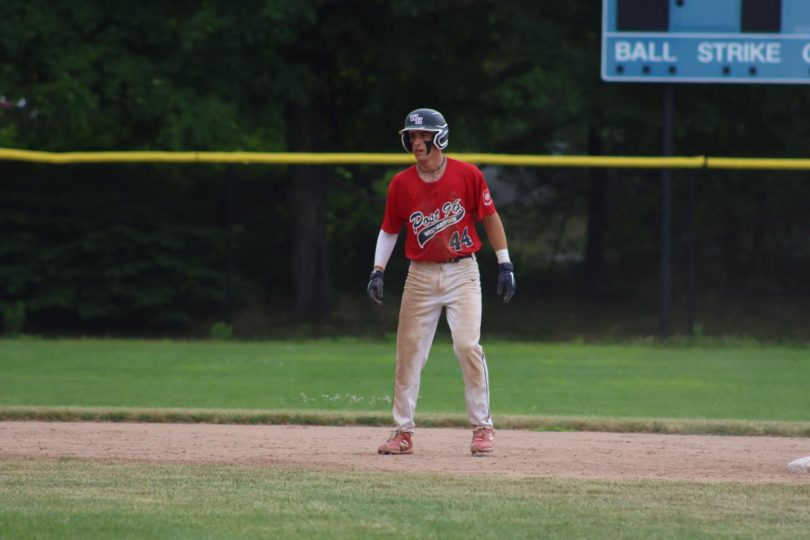 Catcher Tommy LaSpada hit a double in the bottom of the seventh, securing the walk-off win for West Hartford's 19U Legion team. Courtesy photo 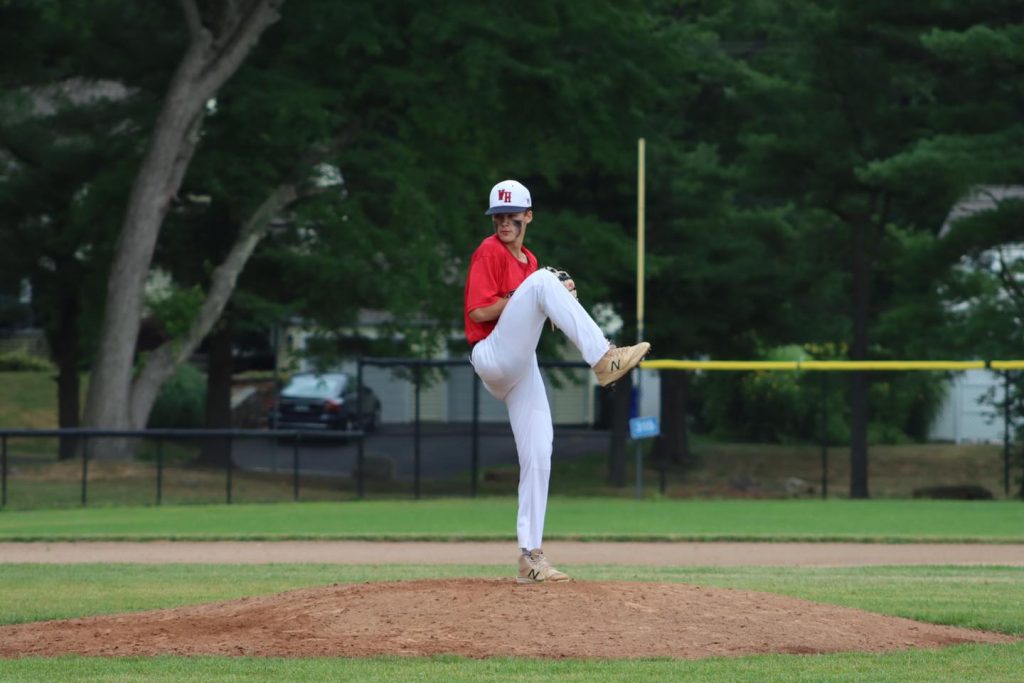 With the game tied 3-3 in the bottom of the seventh, all eyes were on Tommy LaSpada as he tried to help his West Hartford Post 96 19U team advance to the second round of the American Legion State Tournament.

Playing on his home field, the 2022 Hall graduate didn’t panic. LaSpada stepped to the plate with two men on and drilled a walk-off double over the center fielder’s head, securing the 96ers’ 4-3 victory over NCL/Windsor Locks. While LaSpada drove in the game-winning run, it was a team effort to complete the comeback in the seventh inning. 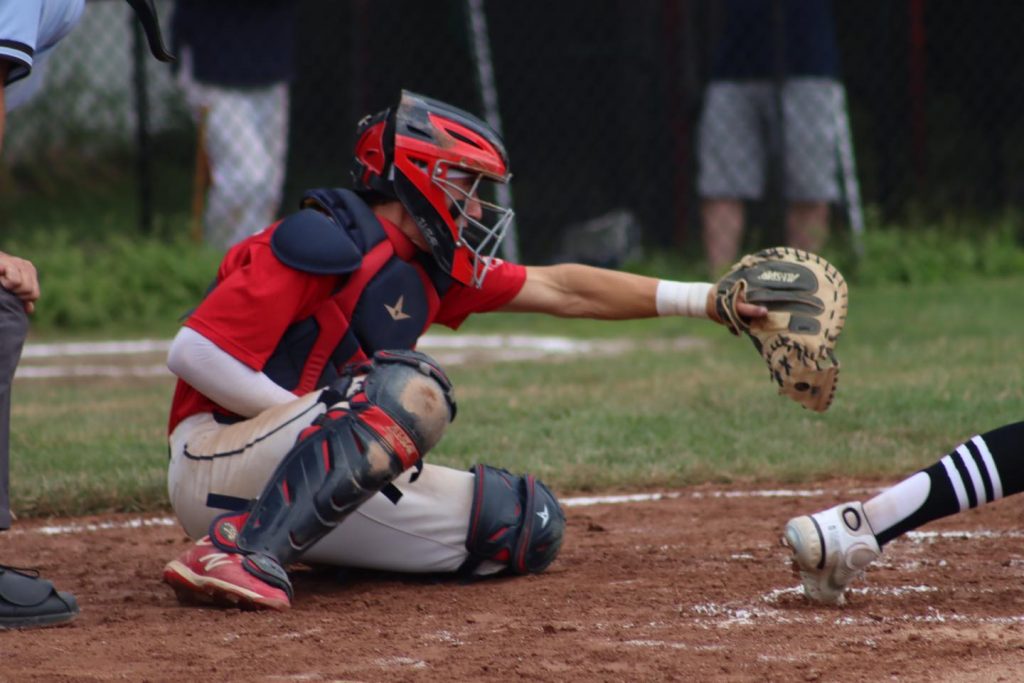 Trailing 3-2 entering the bottom of the seventh, West Hartford was in an unfamiliar position. Finishing the season with a record of 16-0, and an average margin of victory of almost five runs, the 96ers were not often challenged like they were on Saturday afternoon.

“It wasn’t panic which was huge,” head coach Sean McCann said of the team’s mindset entering the final inning. “I think it shows maturity on their part to not panic because if you panic, you’ve already lost.”

With some of the group’s usual go-to hitters having an off day, the team had to adopt a next man up mentality. After not entering the game until the fourth inning and batting ninth in the lineup, Brian Chelli sparked the offense with a deep leadoff triple to right field.

“He’s been hitting well, but in that situation, being the first batter up, there’s a lot of pressure,” McCann said of Chelli’s hit. “Some guys would wear that pressure, but he rose up and shined through it. […] For him to go in there and do what he did on a full count pitch, it was really cool to see.”

NCL made a pitching change in an attempt to calm the storm, but Dave Cantarella rose to the occasion, following Chelli’s triple with an RBI double to tie the game. NCL secured one out, but after the 96ers’ top batter, Joe Dooley, was intentionally walked, it was LaSpada’s turn. And he delivered. 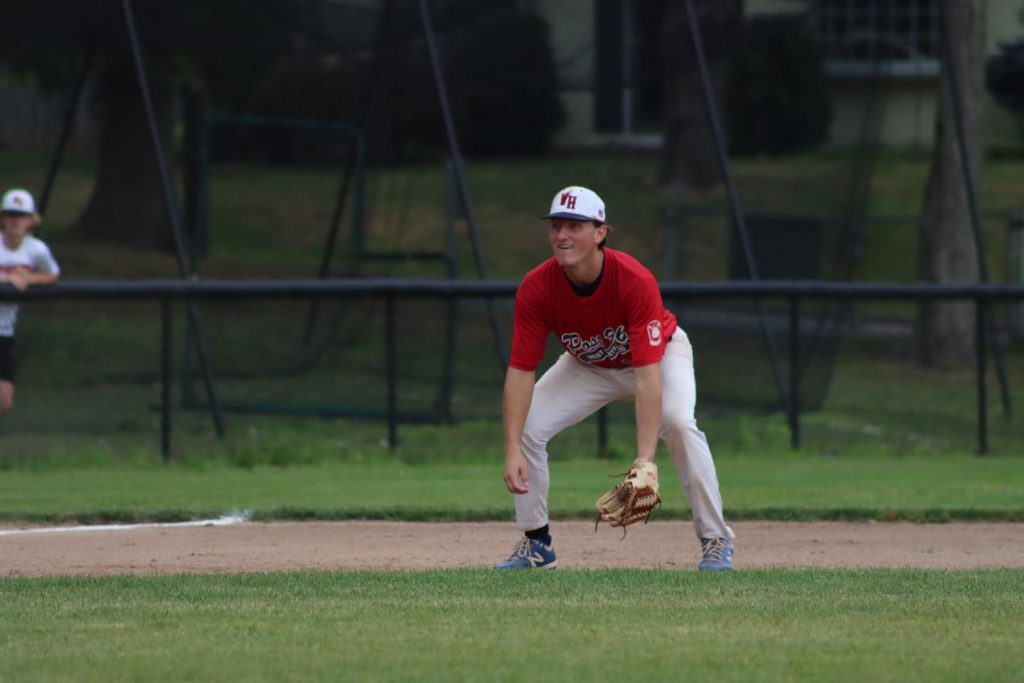 The game started a little rocky for the 96ers with an error that allowed the lead-off runner to get on base and eventually score, giving NCL a 1-0 lead after the first inning. West Hartford was unable to respond in the bottom of the first, but they battled back to score two runs in the bottom of the second and take a 2-1 lead.

With the momentum swinging in West Hartford’s favor, NCL was not phased, bouncing back with two runs in the top of the third inning to regain the advantage and force West Hartford to respond.

“I’m glad we were challenged early,” McCann said. “I think we found out a lot about ourselves, and we talked about it in the post-game huddle. When we’re in tough situations, everyone is still believing and still competing. We saw a different look in their eyes knowing we can do this.”

Both teams had multiple scoring opportunities before the seventh inning, but strong pitching on both sides left many runners stranded on base. Quinn LaRock had a solid performance for West Hartford, pitching 3.0 innings with two strikeouts and no walks. The 3-2 score upon his exit was misleading with all three of NCL’s runs coming from West Hartford fielding errors. 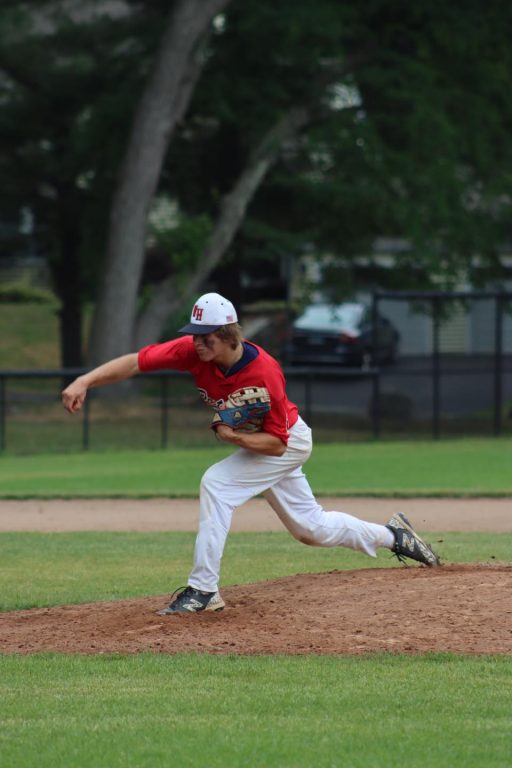 “We’ve gotta make plays in the field, we were sloppy today,” McCann said. “We got away with playing bad defense and still coming up with the win.”

With continued consistent production on the mound and tighter defensive play, West Hartford is in a good position defensively heading into the second round. But as a team that averages about eight runs per game, they will need to find a way to pick back up their offense following Saturday’s four-run performance.

“We got to go back to the drawing board,” McCann said of the adjustments ahead of Sunday’s game. “Do we maybe play a little more small-ball, bunting, hit-and-runs? We just have to be a little more aggressive with our calls from a coaching standpoint.”

With less than 24 hours to prepare, McCann and his coaching staff will work to make the necessary adjustments to avoid the need for another walk-off in the second round. West Hartford returns to action on Sunday as they face Ellington at Hall High School. First pitch is scheduled for 1 p.m. 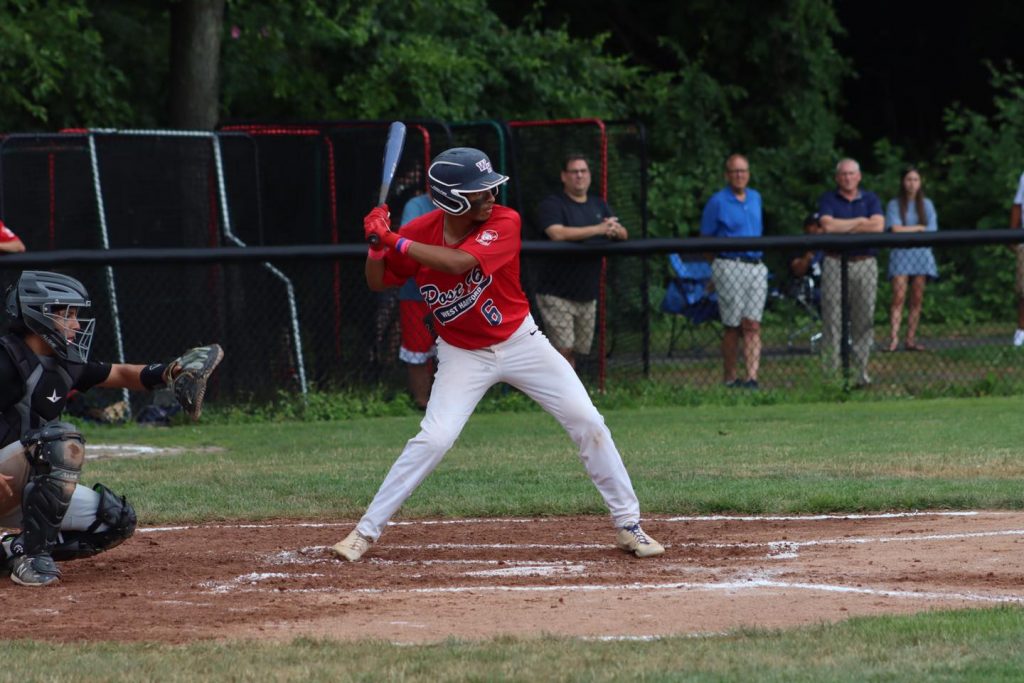 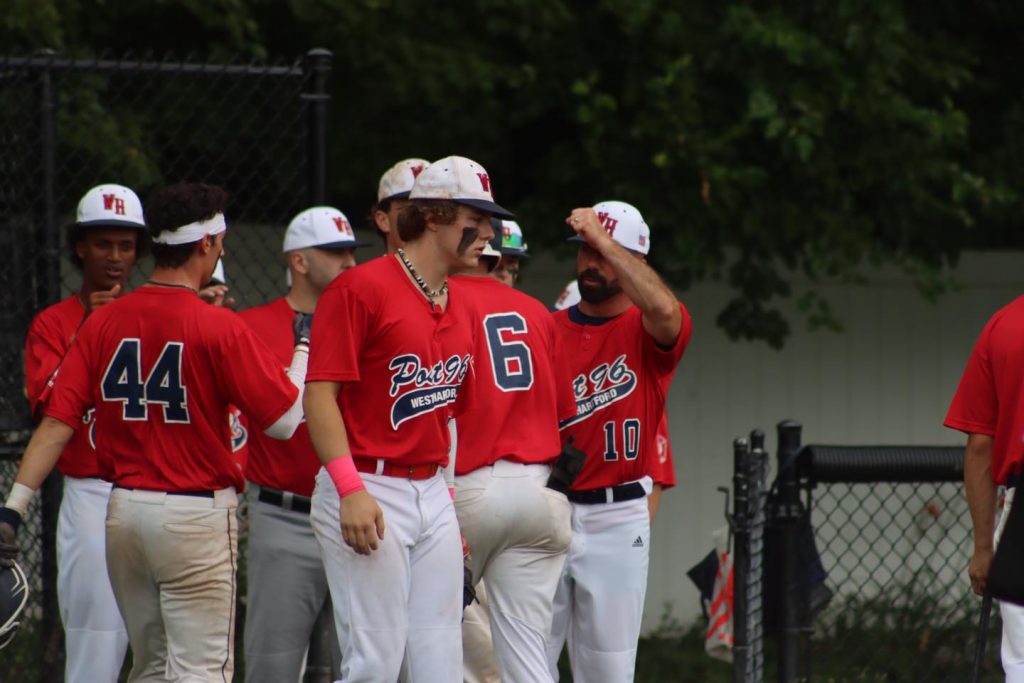 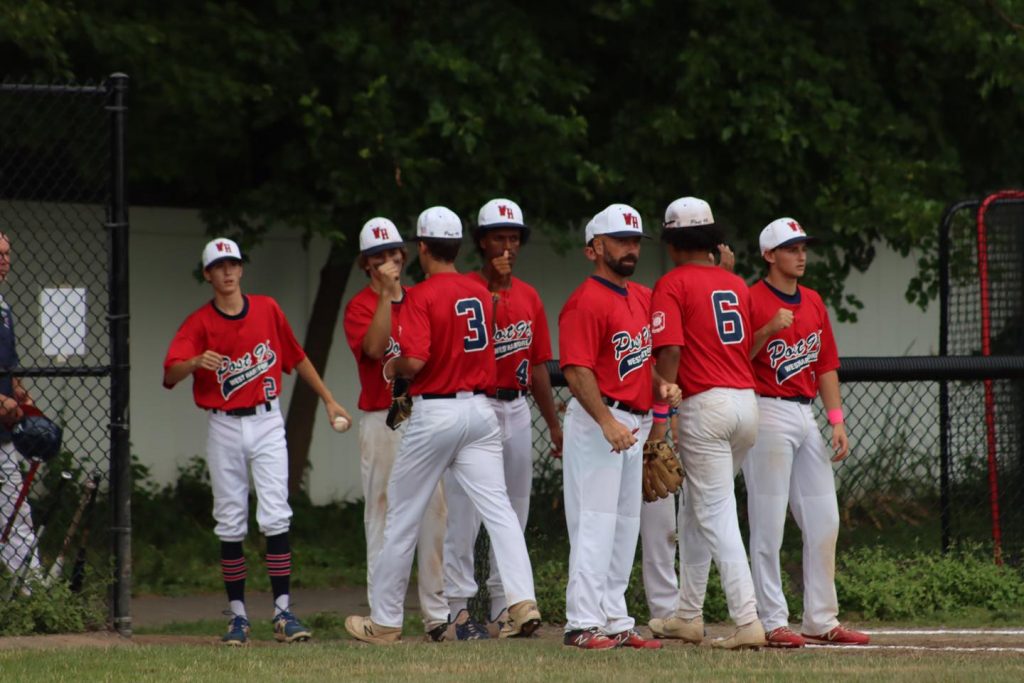 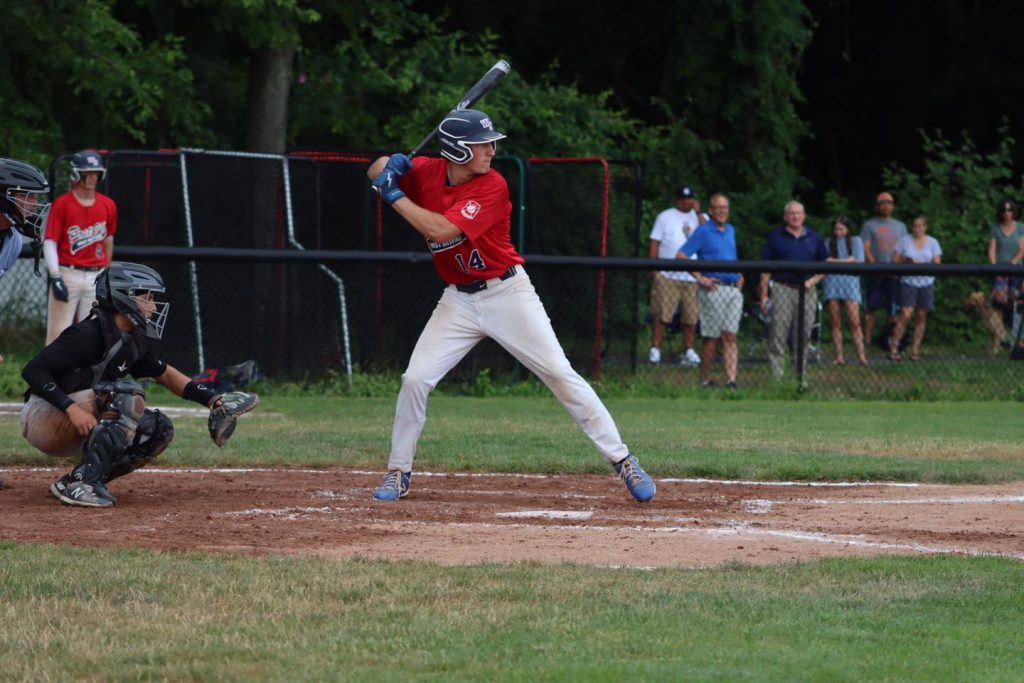 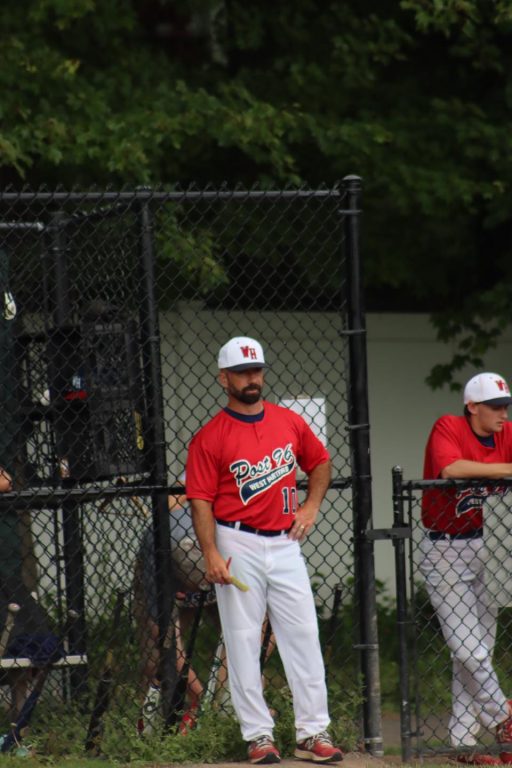