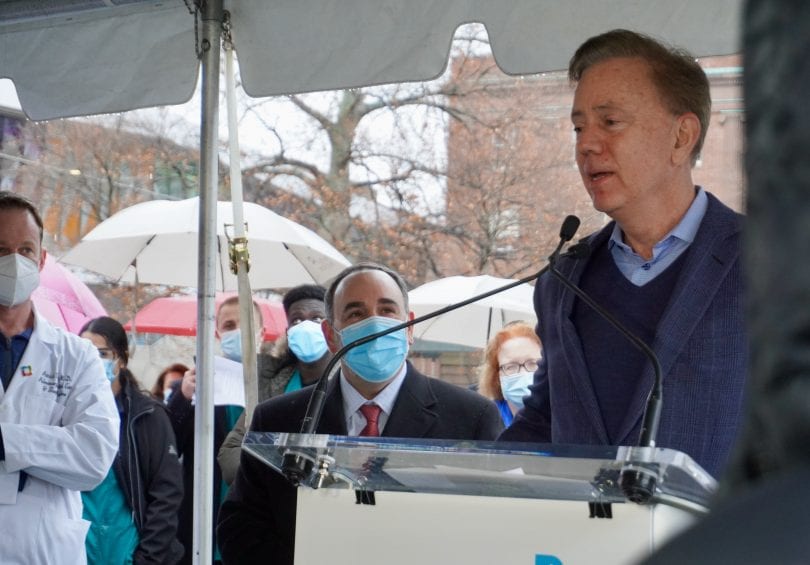 Some legislative leaders say they are open to amending the statutes to require reauthorizations by the legislature every 60 or 90 days.

As the Connecticut legislature prepares to convene the 2021 session, lawmakers will consider the ongoing necessity of the emergency powers that have enabled Gov. Ned Lamont to govern with historic autonomy for nine months during the coronavirus pandemic.

Lamont declared an emergency on March 10, with two confirmed cases of the COVID-19 virus in Connecticut. Before long, the rapidly spreading virus had largely sidelined the legislative branch of government. Lawmakers formally adjourned their regular session in early May, having passed just one bill. And although the legislature approved a handful of measures during special sessions, Lamont has wielded extraordinary authority over the state government in 2020.

The governor extended the emergency declaration in September. At that time, a committee of 10 legislative leaders voted along party lines to let the declaration continue. By the time the extension runs out on Feb. 9, Lamont will have been governing with additional authority for 11 months.

“Certainly, there’s no precedent for it in the state of Connecticut during the 40 years that I’ve been in the General Assembly,” Senate President Martin Looney said Wednesday. Looney and other legislative leaders agreed there is value to having a nimble executive branch in times of crisis.

As the pandemic situation has changed daily, Lamont has been willing to exercise the additional authority to change the law of the land in almost real time. When the virus tore through the state and tested hospital capacities in the spring, the governor initiated a lockdown and mandated public health orders aimed at slowing its spread.

Last week he described the experience as a scramble marked by shifting circumstances and a frustrating lack of guidance from the federal government.

“I knew what I knew and I knew what I didn’t know and I listened,” Lamont said. “I just figured that my job was to take the best information I could from the best people I could and try and explain it as best I can.”

Lamont would not say whether he anticipated the need to extend the emergency beyond February. And although he expressed a desire to return to “a normal course of action very soon,” recent weeks have seen more demand for quick action.

After a respite during the summer, colder weather has brought a resurgence of the virus and Lamont is under pressure from some to tighten restrictions on businesses. Meanwhile, the state government is now attempting to manage the rollout of the COVID-19 vaccine.

Some point to the unparalleled vaccine rollout as the type of problem that should be managed through emergency power.

“He just allowed pharmacists to administer the COVID-19 vaccine by emergency order. It’s good that he has those powers,” Incoming House Speaker Matt Ritter said Wednesday.

“Imagine if the legislature had to come into session to do that. I guarantee you it would slow things down,” Ritter said.

However, there is some apprehension in the legislature about renewing the governor’s emergency power for another six months, should he seek it. Both Ritter and Looney seemed open to amending the statutes to require reauthorizations by the legislature every 60 or 90 days.

Lawmakers also want a say in how future pandemic relief funds are spent by the state. While the Lamont administration had unilateral discretion over how the CARES Act funding was spent this year, lawmakers may look to draw on any future stimulus dollars as they work to craft a budget for the next biennium.

“It now may be time for the legislature to assert its role in the appropriations process with the next round of federal funding if there is one,” Looney said.

Some in the legislature are hoping for a more thorough evaluation of the governor’s emergency powers and how they have worked during the pandemic. Incoming House Minority Leader Rep. Vincent Candelora said that 2020 had seen a “significant abdication of legislative authority.”

While Candelora agreed that some of Lamont’s actions, like requiring residents to wear masks in public, were an appropriate use of the public health emergency statutes, he said that others, like closing businesses, have been an overreach. He said the legislature needed to conduct a “post-mortem” to ensure the three branches of government have worked as intended.

“I don’t believe the governor should have the power to be making law – which is what those statutes do – this long through the pandemic. It should be in consultation with the legislative branch. And that is very different than saying ‘I think the governor made the wrong decisions.’ I’m not saying that. I just think that any decisions where laws are modified should be done with legislative input, as arduous as it might be,” Candelora said.

Incoming Senate Minority Leader Sen. Kevin Kelly, agreed and questioned whether the state benefited from “putting all the eggs in an executive basket.”

“Our government is not built for one-person rule. We need to have the legislature involved and engaged and present. That hasn’t really happened,” Kelly said.

A similar argument has played out within the confines of the third branch of government where courts have heard lawsuits contesting the governor’s closure of businesses and his mandates requiring residents to wear masks in public.

On Friday the state Supreme Court heard its first major challenge of Lamont’s emergency powers in the form of a lawsuit from a pub owner in Milford, whose business has been closed by executive order since March. During the arguments, her lawyer suggested that Lamont was “playing God” and the legislature’s failure to check him represented a “dereliction of duty” rather than acquiescence.

In another lawsuit, lawyers argued that the Education Department’s insistence that school children wear masks required an interpretation of Lamont’s emergency powers that could be used to justify anything.

“There is nothing to stop them from mandating tomorrow that all children wear pressurized space suits and breath bottled oxygen as a condition of receiving a public education in Connecticut,” they wrote.

Michael P. Lawlor, an associate professor at the University of New Haven and former co-chairman of the legislature’s Judiciary Committee, said these legal challenges would likely be unsuccessful because the legislature explicitly gave Lamont the authority he is using.

“I think that his powers will be upheld, or certainly should be upheld in that area, in order for the state of Connecticut to respond to an emergency like the COVID crisis,” Looney said.

Still, in a year when one branch of government was largely inactive, Candelora said it was especially appropriate that the judicial branch continue to act as a check on the executive.

“Whether I agree with what they’re suing over, whether it be a slip and fall or freedom and constitutional rights, everybody has that right to seek redress. Those cases are all appropriate,” he said.

Asked whether he had used the emergency laws as they were intended, Lamont said Thursday that he believed he had.

“I tried to keep to my lane. I tried to say whatever I do on an emergency basis, I do in the name of public health and related to COVID,” he said. The emergency powers exist “to keep you safe during a fast-changing COVID situation but this is not the norm in elected government.”