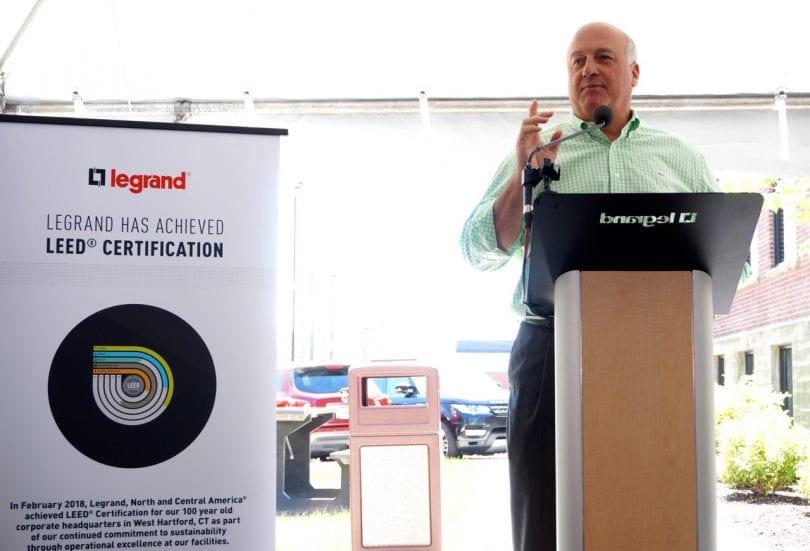 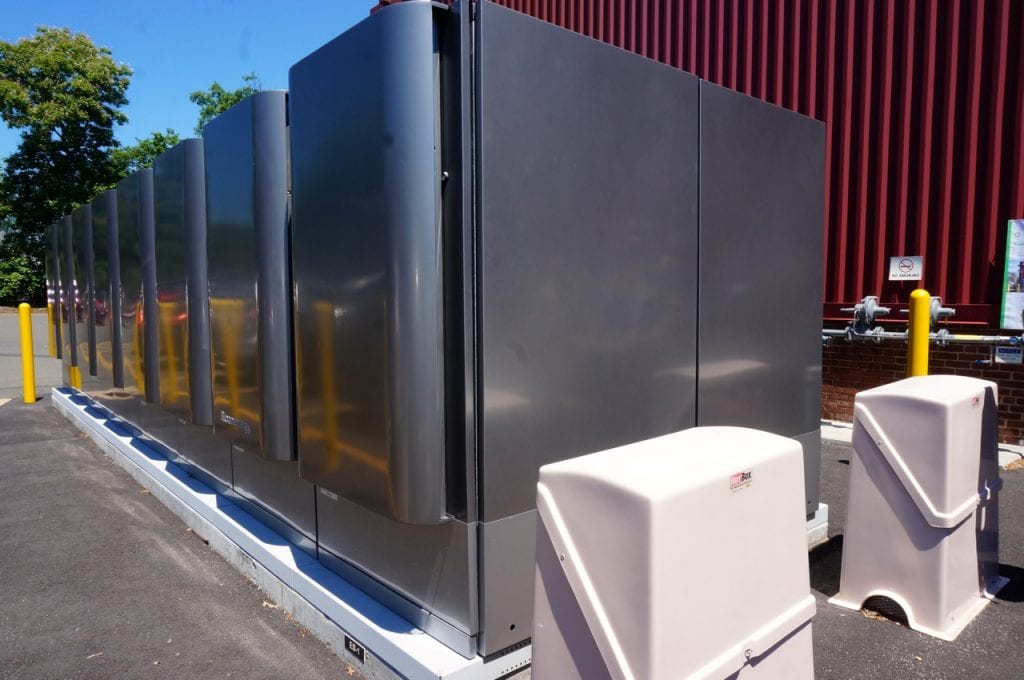 Legrand North and Central America learned last month that the company’s West Hartford corporate headquarters – a campus of five connected buildings, one of which is about 100 years old – had earned the prestigious LEED Certification.

“As a global company, we’ve been committed for a long time to protecting the environment,” John Selldorff, president and CEO of Legrand North and Central America, told staff and invited guests at a celebration held at the headquarters last week.

Legrand used Arc, a digital performance platform that helps benchmark, measure and improve sustainability performance, to utilize actual building performance data to achieve points toward LEED Certification. Included are statistics for energy, waste, water, human experience, and transportation data, and a score is then tabulated which is compared to similar facilities.

“This is core to who we are, not just where we are,” Selldorff said. “It’s a demonstration of what is possible … I hope it will be an inspiration to others.”

Most facilities that become LEED Certified are new, but Legrand’s five interconnected, mixed-use office and manufacturing space includes a variety of construction, including a nearly 47,000 square foot structure built in 1929.

The overall facility totals 262,690 square feet, and employs nearly 650 people. Selldorff thanked all of the employees for their efforts in improving the day-to-day sustainability of the buildings.

Work to become LEED certified was done without downtime, giving the company firsthand experience in the challenges of retrofitting existing buildings. As a “global specialist in electrical and digital building infrastructures” committed to providing “better form, better function and better experiences,” Selldorff said that what the company accomplished indicated that when it comes to sustainability, “We actually walk that walk.”

Becoming LEED Certified was just one more way the company demonstrated its CSR – “corporate social responsibility,” said Legrand CEO Benoit Coquart. “It’s a matter of pride for us, and I hope we will have many more buildings become LEED certified,” Coquart said.

Susan Rochford, vice president for Energy Efficiency, Sustainability and Public Policy, Legrand North and Central America, leads the CSR efforts at the headquarters, and explained that the LEED score is dynamic. The company achieved LEED Certified status with a score of 48, but the goal is to continue to increase that, eventually gaining “silver” status (50-59 points) or even beyond.

Ravi Ramanathan, vice president and general manager, Electrical Wiring Systems, Legrand North and Central America, praised Legrand’s employees for their support of the LEED Certification process. “Our employees on this site really make it happen by paying attention to small things,” he said.

Turning things off when they’re not in use, and even riding their bikes to work, help improve the score, Ramanathan said. Other contributors include a transition to using green cleaning products, changing the air flow through the site, and moving all smoking areas to at least 25 feet from the buildings. All made a difference.

Legrand has also reconfigured spaces to incorporate more natural light, changed over all plant lighting to LED, committed to purchasing furniture made from recycled materials, and reduced its carbon footprint cutting energy consumption by more than 10 percent through installation of a fuel cell – changes which all are incorporated into earning the LEED Certification.

By 2022, Ramanathan said, the target is to reduce water and energy usage by 25 percent.

“We’re achieving all this in a 100-year-old facility. I think this is a big deal,” Ramanathan said.

As he gave invited guests a tour of the building, Plant Manager Mike Kijak pointed out the variety of sustainable building policies that were at the core of achieving LEED Certification. Every building on the campus has its own recycling center, he said.

“We use about 11 million pounds of steel per year, and we recycle about 99 percent of what we get rid of,” Kijak said.

The paint line, which uses 2 million gallons of water per year, has also been a target for energy savings. Even employees’ commutes are a factor in calculating LEED Certification. The average commute s 11.6 mikes, Kijak said, and many employees use public transportation, including CTfastrak which runs right behind Legrand’s headquarters.

Legrand’s fuel cell, installed about two years ago, provides enough energy so that the company can be “off the grid” at all times other than from 5 a.m.-1 p.m. Monday through Friday.

According to a news release from Legrand, “The LEED (Leadership in Energy and Environmental Design) rating system, developed by the U.S. Green Building Council (USGBC), is the foremost program for buildings, homes, and communities that seek to design, construct, maintain and operate for improved environmental and human health performance. More than 92,000 commercial and institutional projects are currently participating in LEED, comprising more than 19.3 billion square feet of construction space in all 50 states and more than 167 countries and territories.” 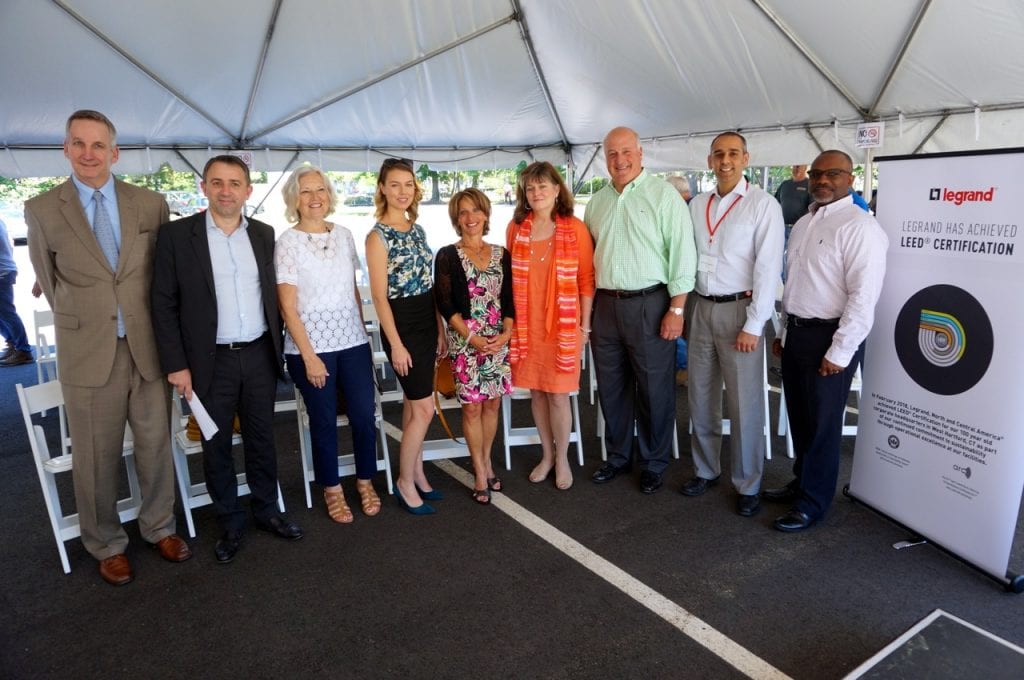 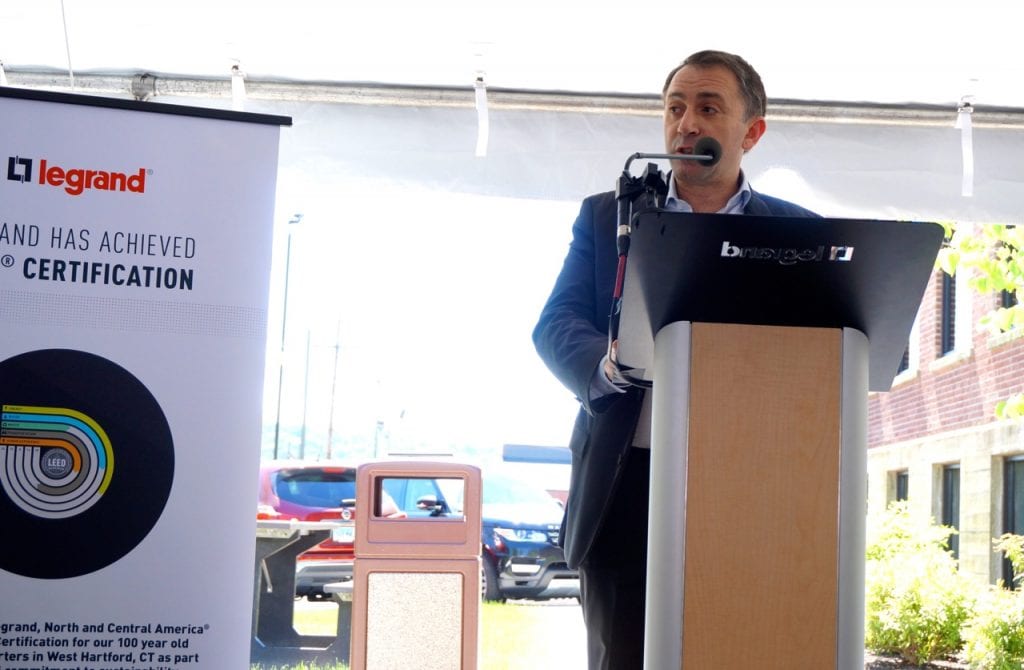 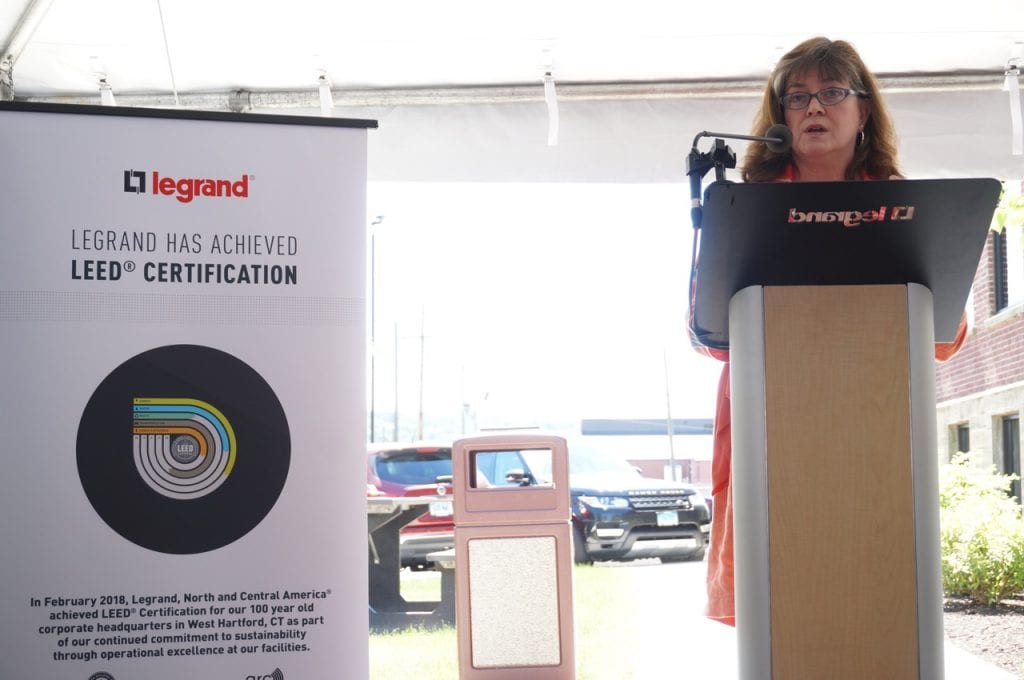 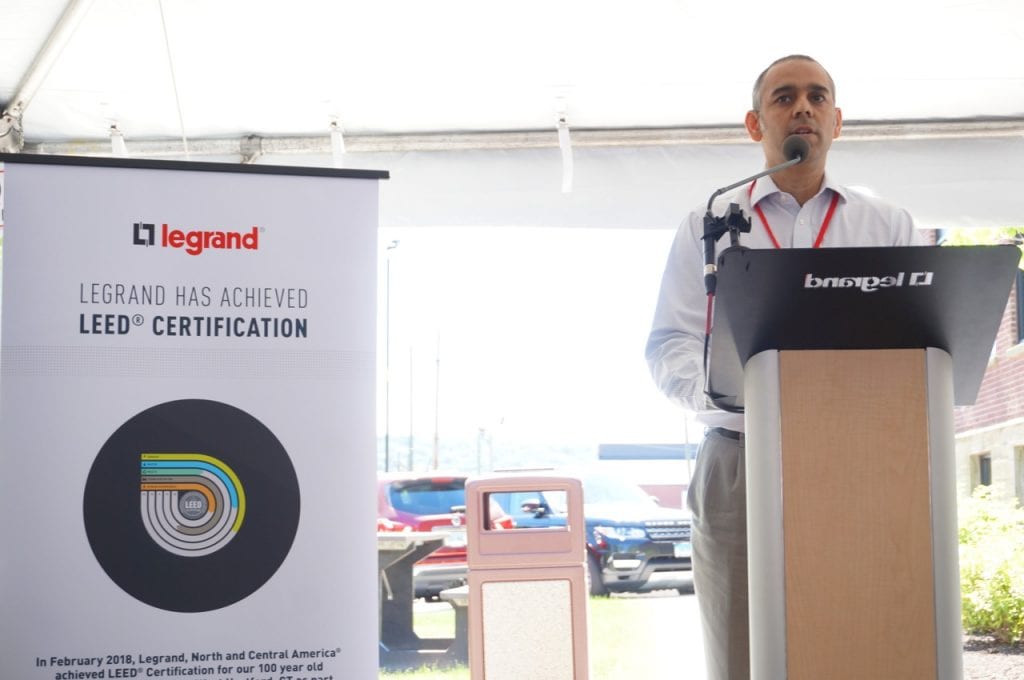 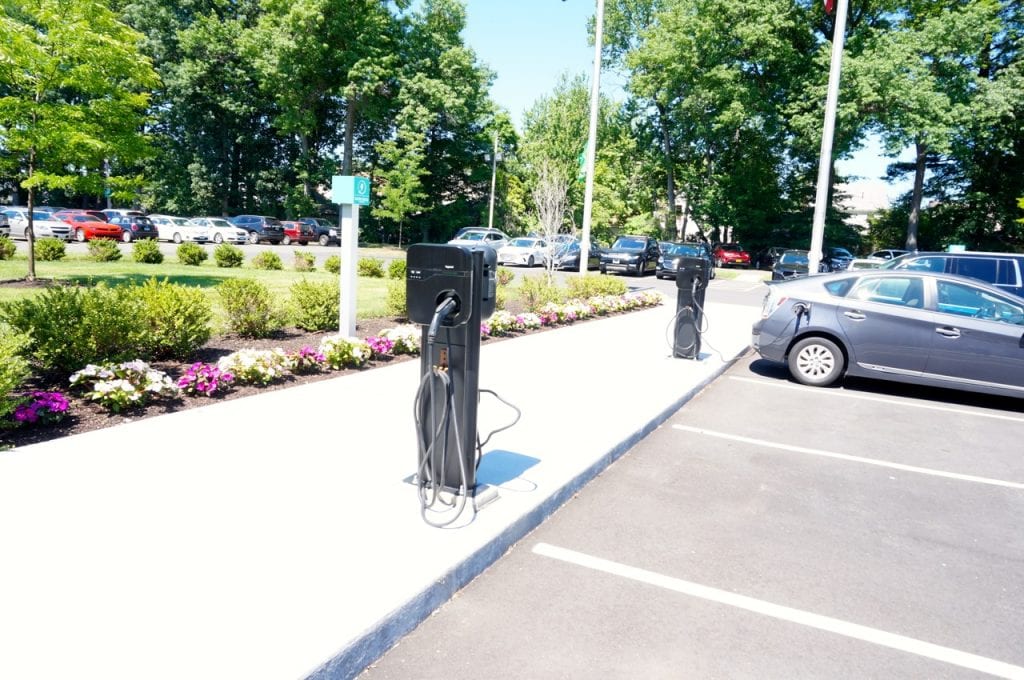 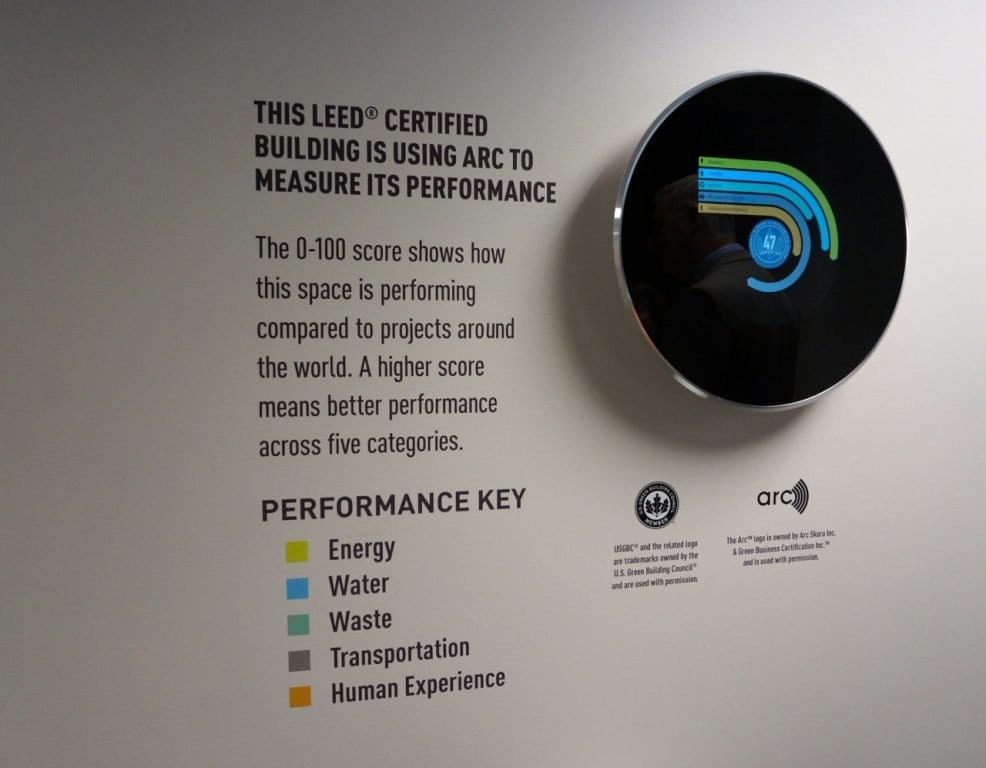 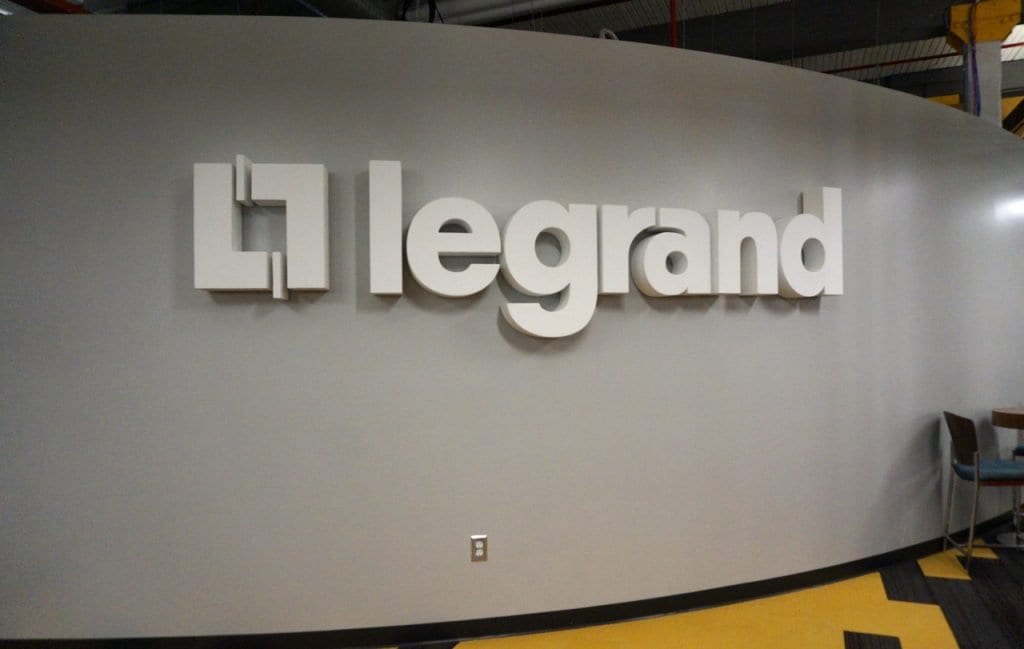 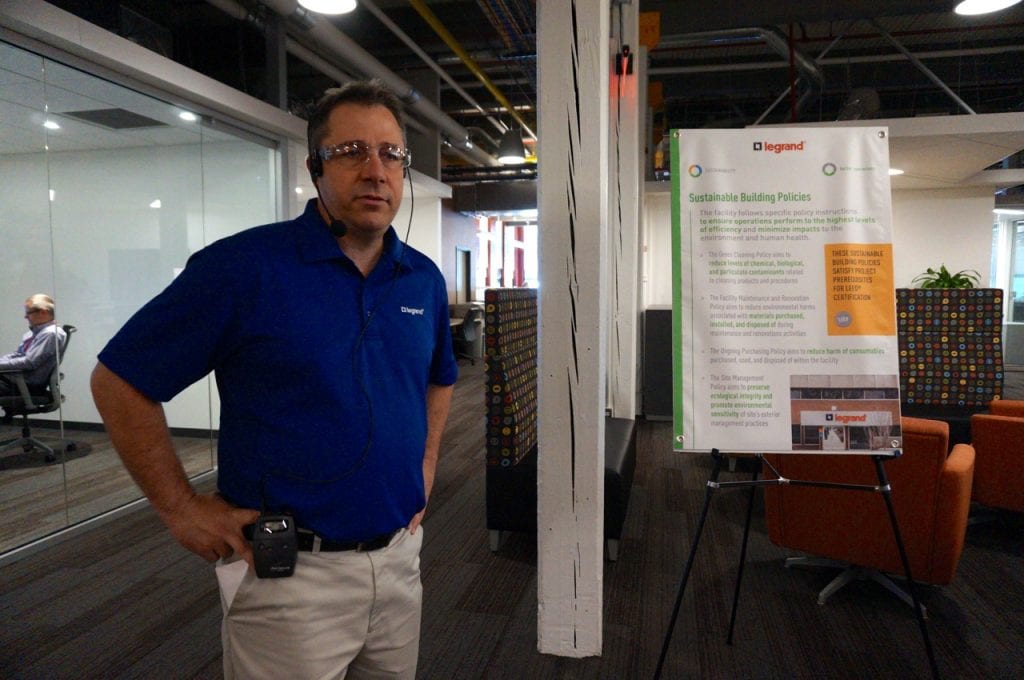 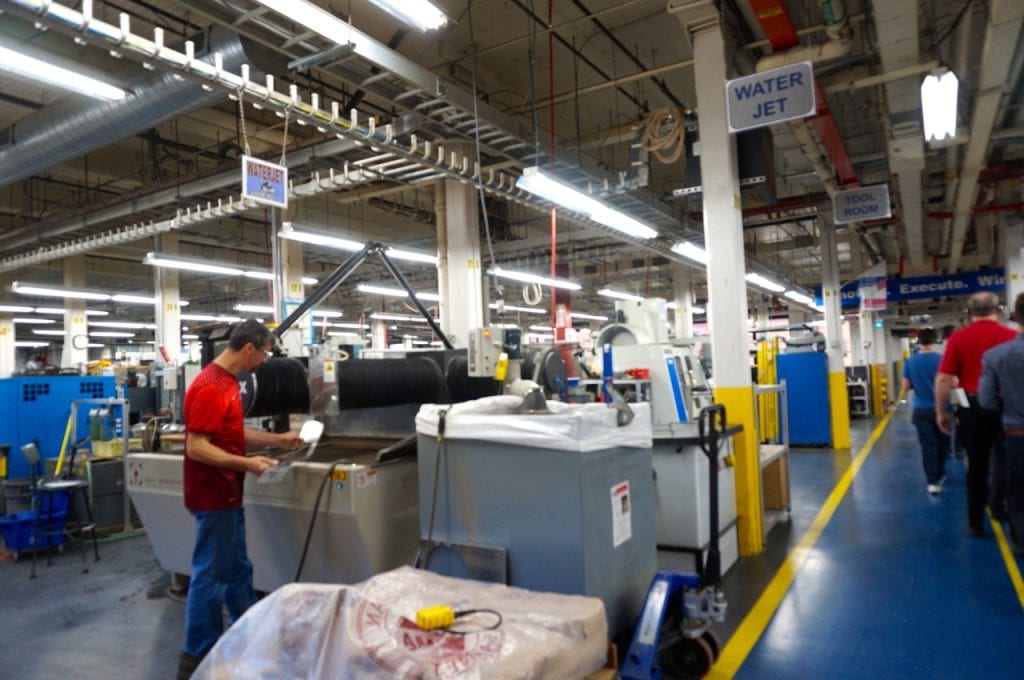 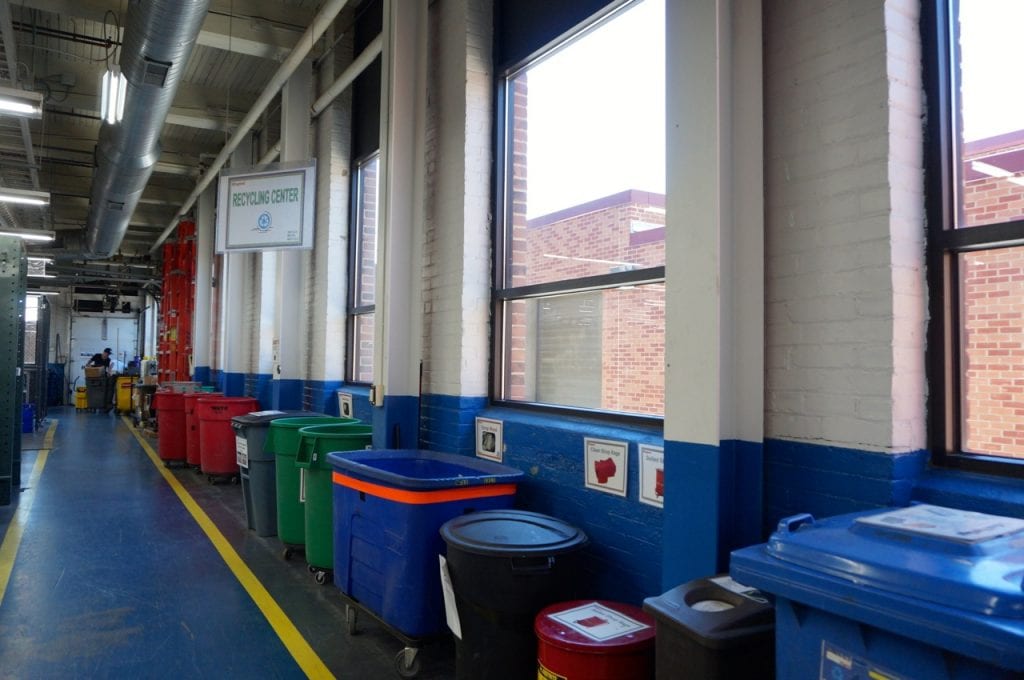 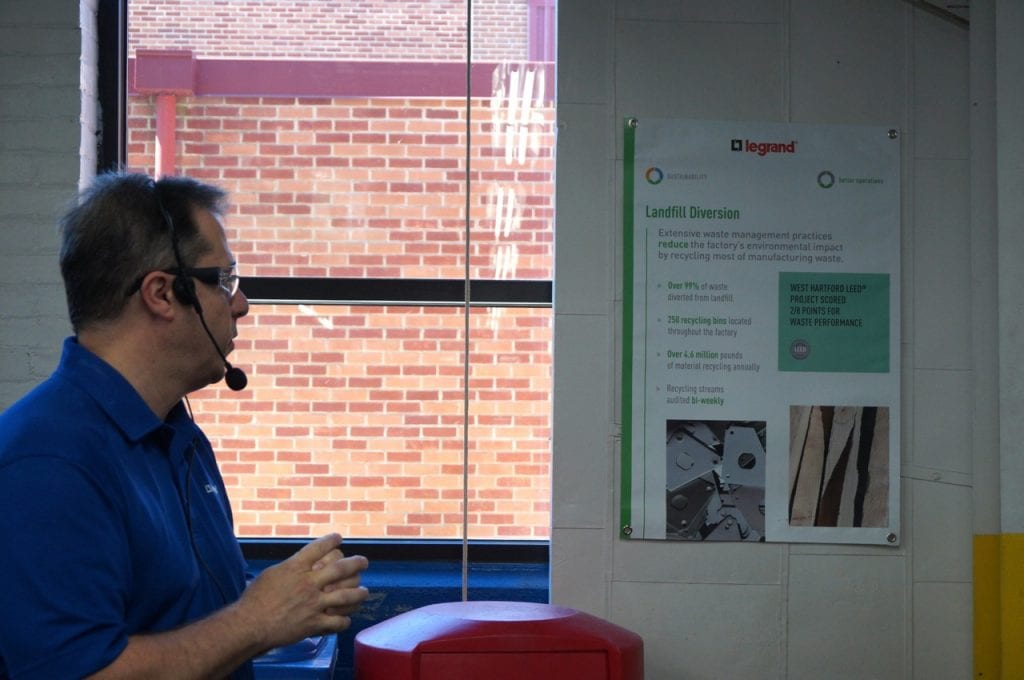 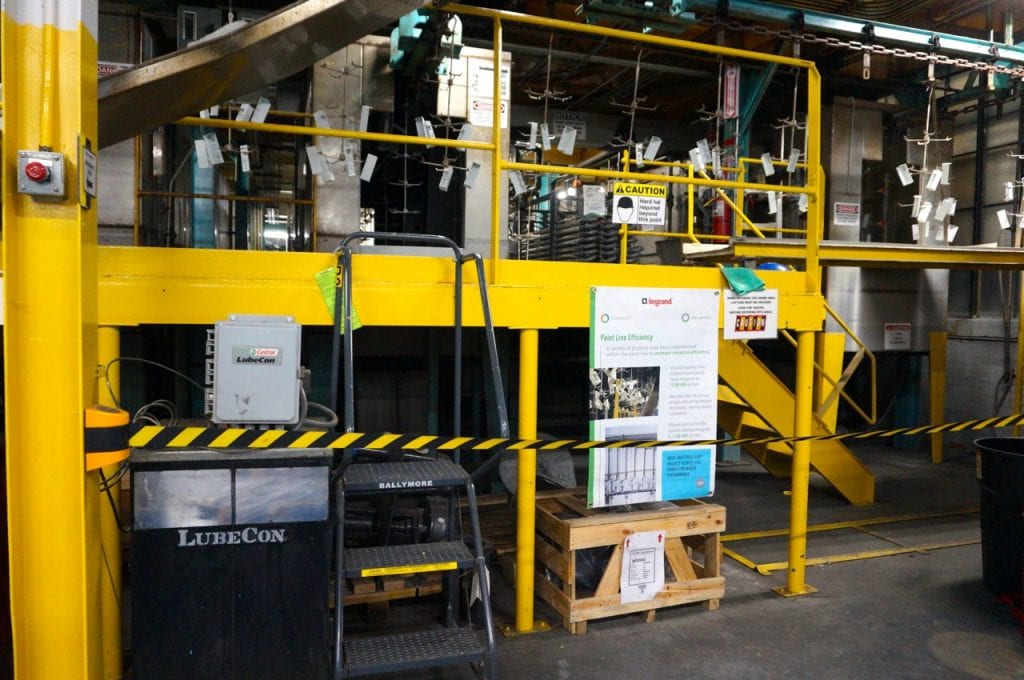 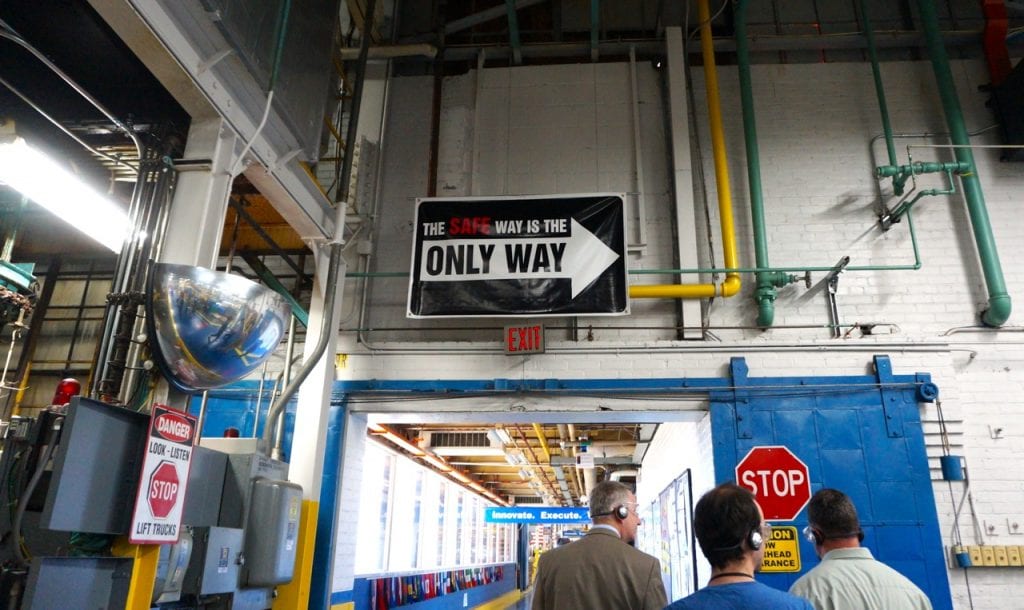 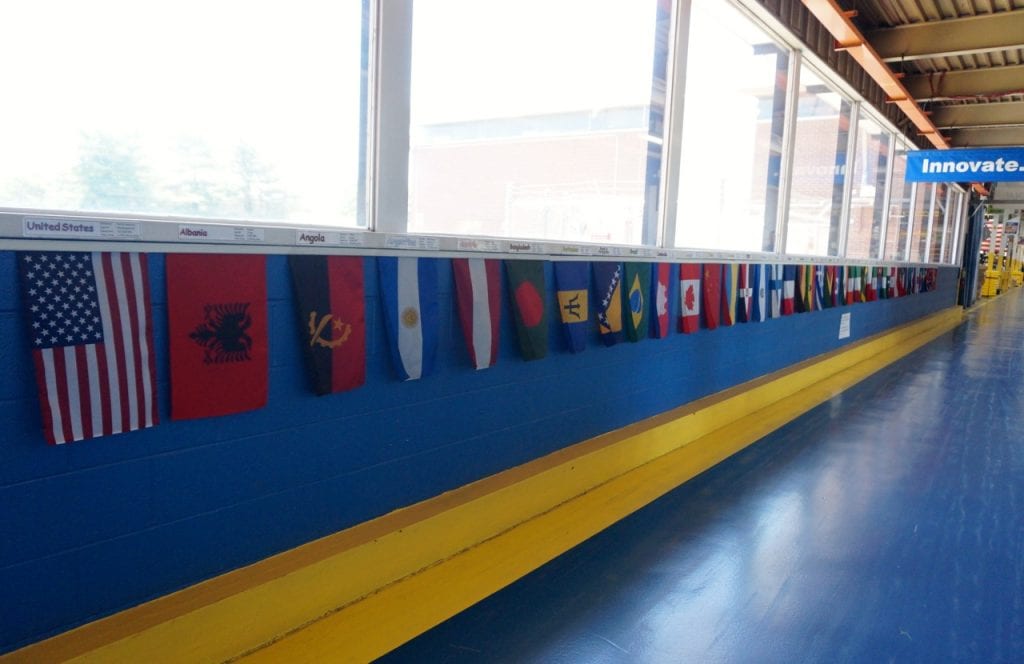 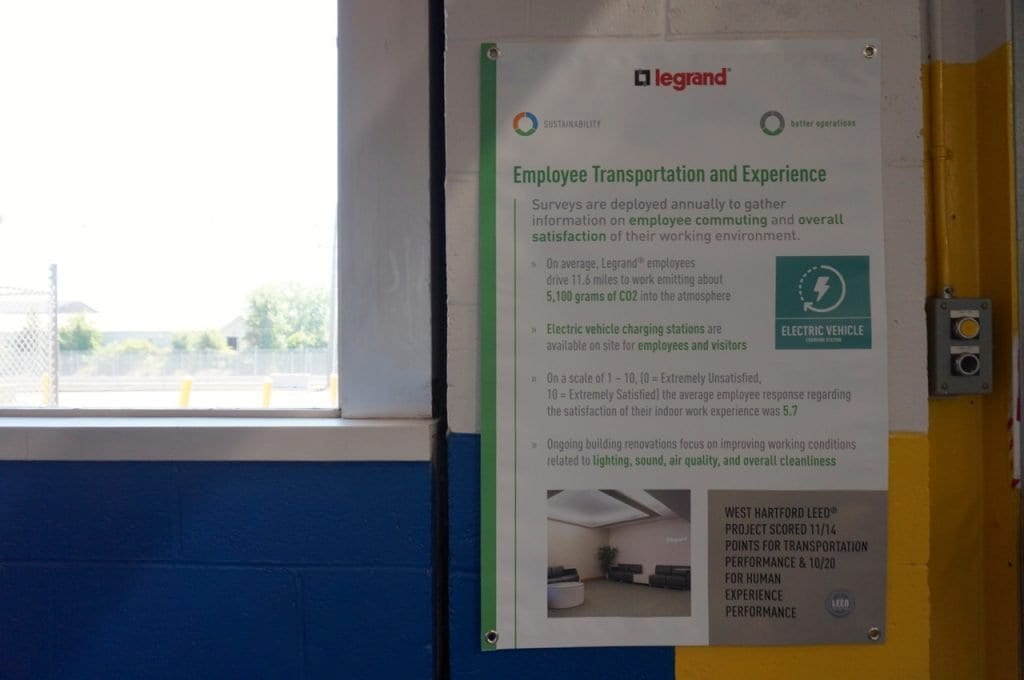 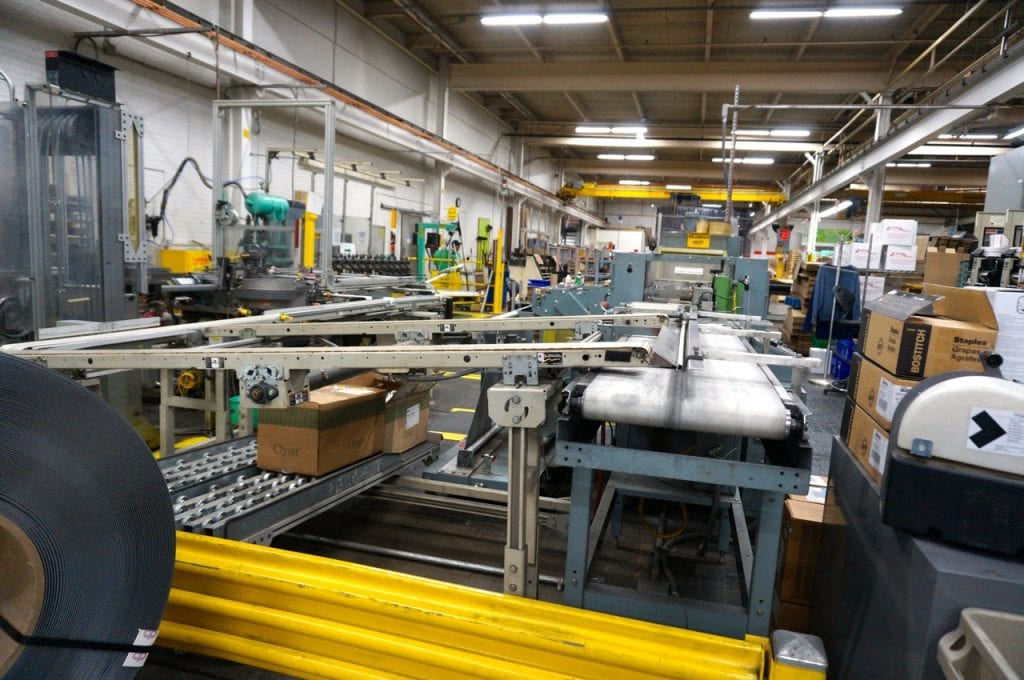 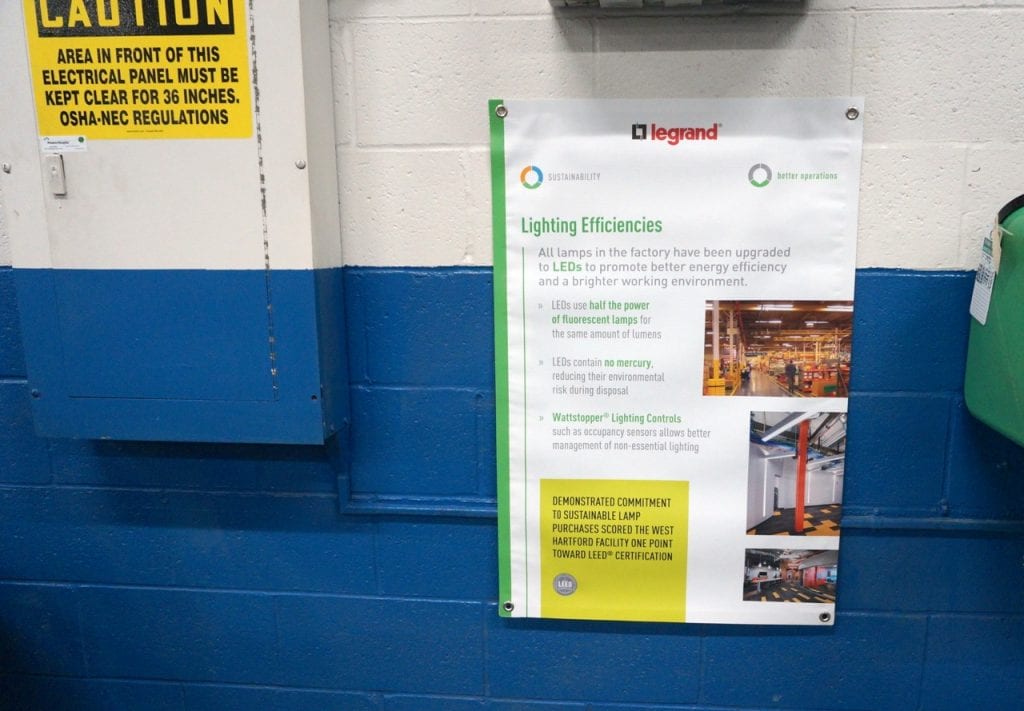 Lighting efficiencies were one of the factors considered in obtaining LEED Certification. Photo credit: Ronni Newton 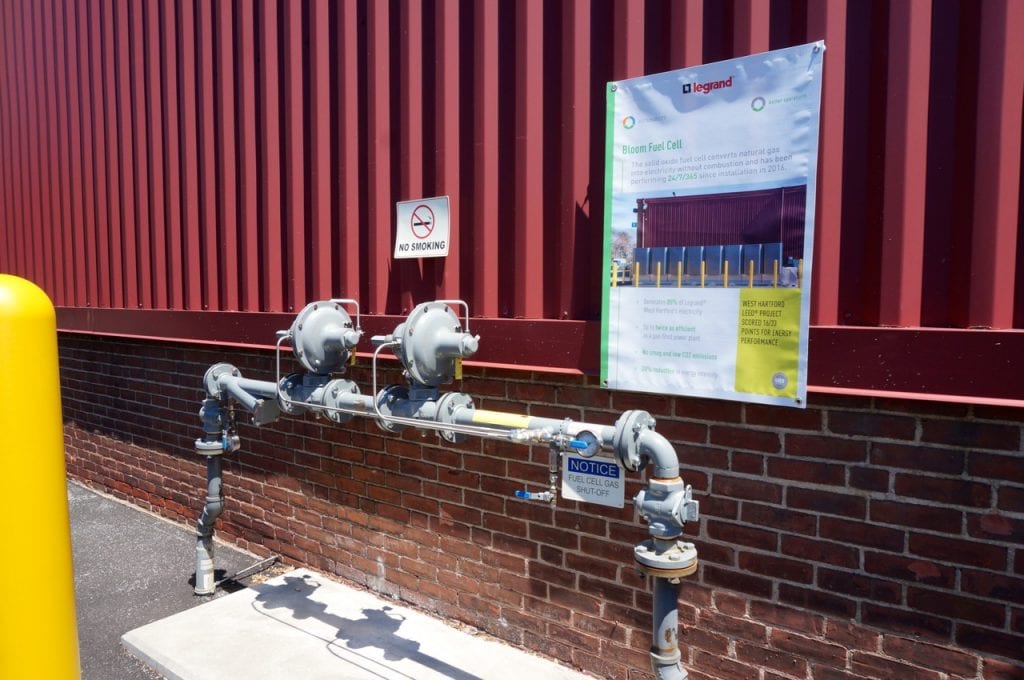