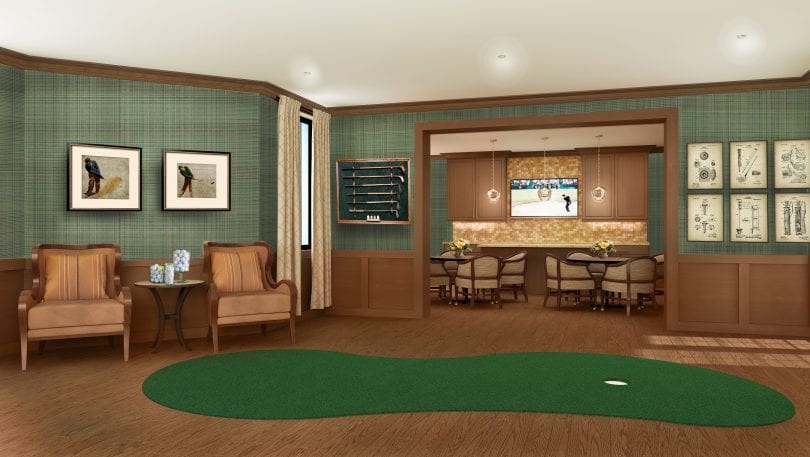 The 19th Hole, a clubroom with an indoor putting green, will lead to the patio and should be a great space for intergenerational use at The McAuley. Courtesy photo

Common areas at The McAuley, a continuing care retirement community in West Hartford, are about to receive a significant update focused on wellness.

The McAuley, a continuing care community that includes independent and assisted living, is about to undergo a “lifestyle evolution” – a major update with extensive renovations to the property’s common areas designed to improve many aspects of the living experience for its 200 residents.

“We are creating new, or enhancing the existing amenities with a focus on wellness,” said Bill Fiocchetta president and CEO of The Mercy Community in West Hartford, which includes The McAuley and Saint Mary Home.

The $4.3 million investment in The McAuley by Mercy Community parent company Trinity Senior Health Communities, was first publicly announced on Jan. 26 by West Hartford Mayor Shari Cantor in her State of the Town Address.

Fiocchetta said that plans for the renovation have been in the works for about 18 months. The property is now 30 years old, and while updates were made to individual apartments and some of the common areas three years ago, it was time for an upgrade to focus on the seven dimensions of wellness: physical, emotional, intellectual, social, spiritual, environmental, and occupational. Each of the planned updates will address at least one of those he said.

Current residents are very excited, said Ramona Beckius, a long-time West Hartford resident who moved to The McAuley about a year and a half ago.

“This is already their home,” said Fiocchetta. “But we are also building for tomorrow’s expectations. Everybody has a bit of ‘HGTV-itis,'” he said, referencing the popular TV show that features home renovations.

On a tour through the property, Fiocchetta and Beckius point out the existing spaces and highlight the improvements that will be made as part of the lifestyle evolution, beginning with the entryways to The McAuley’s two buildings – Abbeyleix (A) and Bellbrook (B).

“We’re replacing the porte cochere,” said Fiocchetta, which is outdated in its styling. Beckius called the new design “futuristic.”

The gift shop, where residents can purchase a variety of gifts as well as some drug store and food items, is being renewed. “It will be much more hospitable,” Fiocchetta said.

While some of the work will be purely cosmetic, several of the updates are much more dramatic, including planned changes to the “Great Lounge” which Fiocchetta said should greatly enhance and transform the atmosphere.

The Great Lounge is a space where residents gather every day at 4:30 p.m. for happy hour – a valued social time and for many one of the favorite aspects of living at The McAuley. A large fireplace is going to be installed along the end of the room which overlooks the atrium, enhancing the homeyness of the space. The bar, which serves soda and juice, as well as wine and beer (all provided by The McAuley), will be moved to the far wall.

The McAuley includes multiple dining options serving breakfast, lunch, and dinner, and although all of the apartments are equipped with full kitchens, Beckius said that most residents choose to have at least two of their meals in either the cafe, bistro, or dining room. Those spaces are also getting updates.

The lower level – the “town center” – is where many of the property’s amenities are located, and that area will get an updated cafe and a former bank branch will be turned into a grab and go coffee shop.

Two fitness rooms – where residents enjoy aerobic activities and strength training will be updated, as well other common areas.

“The game rooms are being built to be much more inviting,” Fiocchetta said.

Pointing out the renderings of the new Card Room and Billiards Room, Beckius said the “ambiance is much more appealing.”

An existing woodworking room is underutilized, and is being moved to a smaller location elsewhere on the property. That space is being turned into a multipurpose space – a private dining room right off the cafe, with seats for about 14 people and the ability to also be used as a small theater room.

The current beauty shop – Catherine’s Hair Salon – is being transformed into a true spa and expanded to include manicure and pedicure stations, as well as an area for massage.

One of the most exciting changes is the creation of several completely new spaces, one of which is called the 19th Hole.

“It’s a club room and indoor putting green. Residents can really have fun there,” Fiocchetta said. The space also lends itself to intergenerational activities when families come to visit, and will be built in a repurposed apartment.

The existing outdoor space includes a small patio next to the greenhouse, but the new patio will be many times larger, wrapping around the greenhouse and overlooking the putting green as well as The McAuley’s beautiful grounds.

The patio will include an outdoor kitchen for residents’ use – including gas grills, a sink, and refrigerator. An overhang and pergola will provide shelter, and ceiling fans will cool the air in the summertime.

Some of the work has already started, and Fiocchetta said plans are for everything to be substantially complete by June 30 – which is when he is set to retire. “That’s why June 30 is so significant,” he said.

While there will be some inconveniences for residents, the demolition work will be minor and Fiocchetta said that contingencies and alternatives have been put into place to minimize interruptions to daily life for the duration of the project.

Residents have been a part of the planning process, including suggesting that the library not be moved to a larger space because they liked the prominent location near the entrance to building A.

“It’s a wonderful library,” Fiocchetta said, which for years was presided over by longtime Duffy Elementary School librarian Millicent Neusner who provided a lot of input for the new space and persuaded administrators to keep the library in the current location.

“After we made the decision, God called Millicent home,” Fiocchetta said. The library will be named in her honor – the Millicent S. Neusner Library, he said.

Beckius said she is really looking forward to the updates, which will add a lot to the experience of living at The McAuley, where residents currently range in age from 70 to 103.

“I don’t regret the move in any way, shape, or form,” Beckius said of her decision to become a McAuley resident. 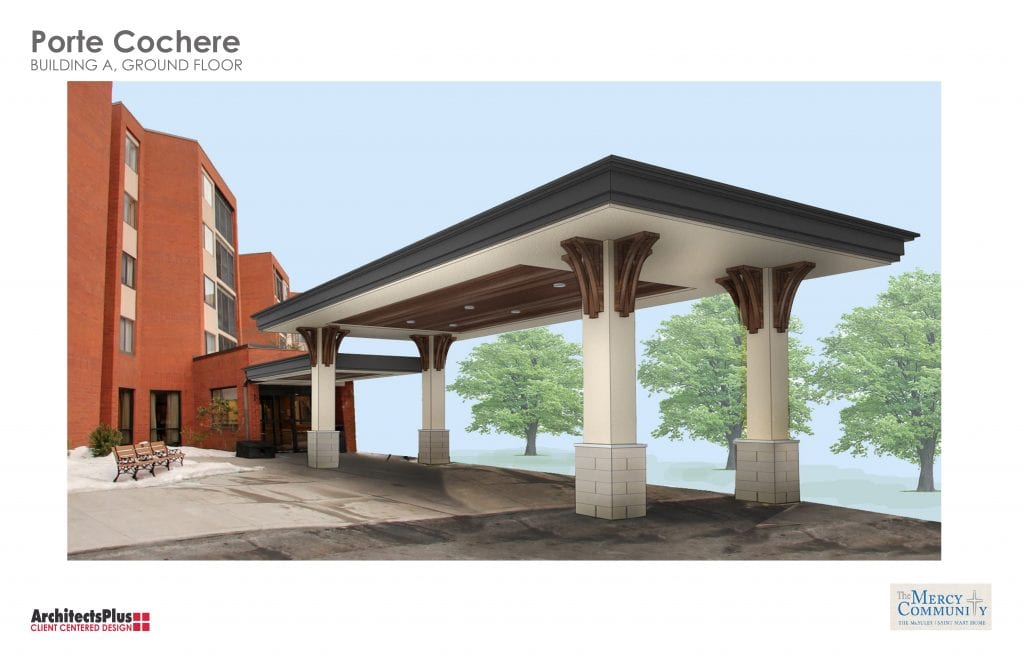 Renovations to The McAuley will be evident immediately, as residents and guests arrive through a new porte cochere. Courtesy photo 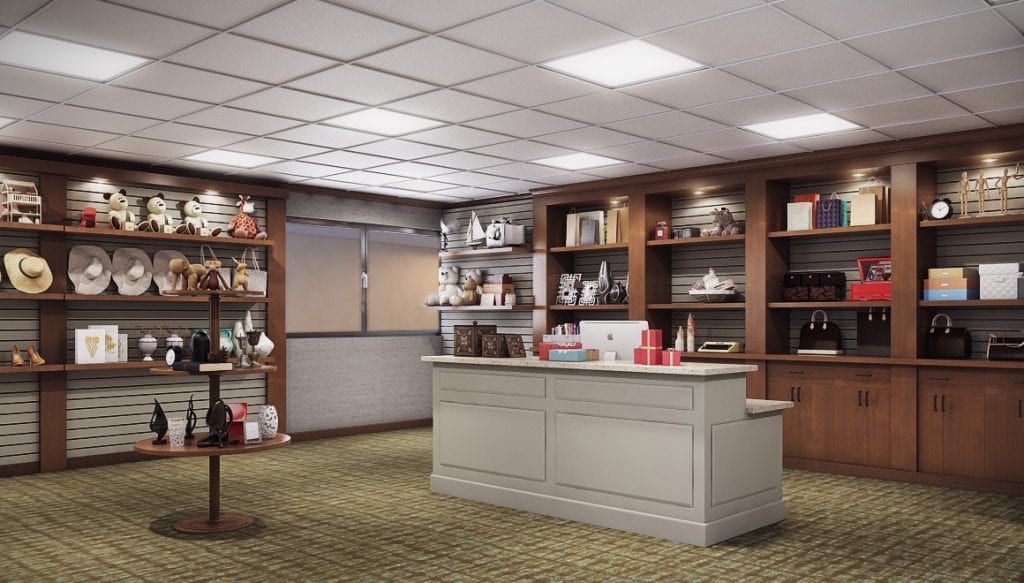 Rendering of the gift shop, which will be getting multiple updates. Courtesy photo 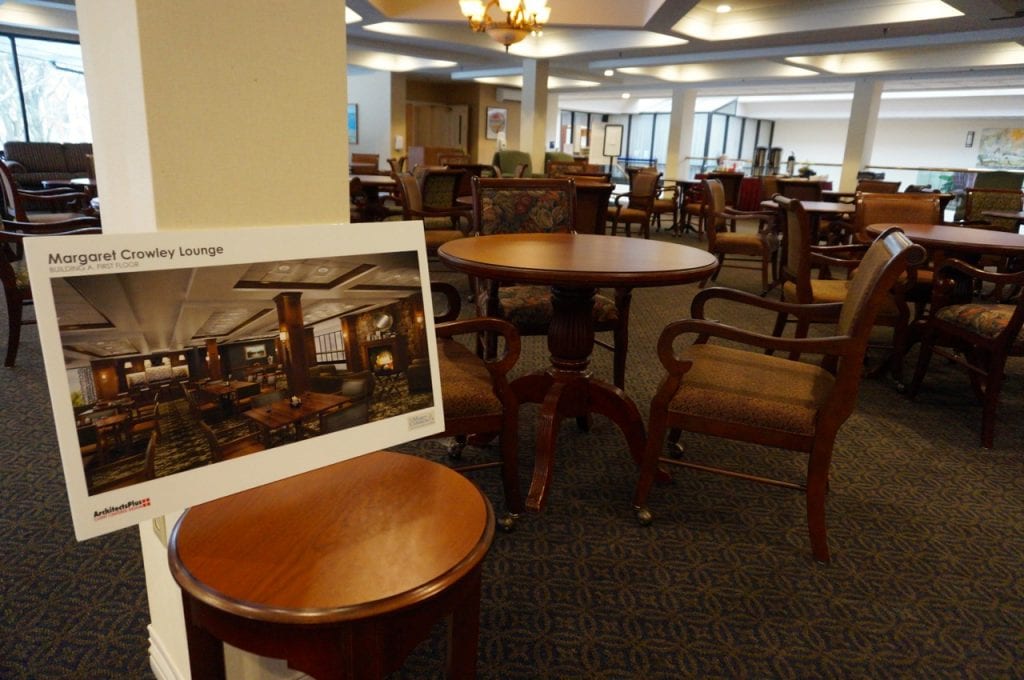 The Great Lounge will be getting a makeover (rendering below). Photo credit: Ronni Newton 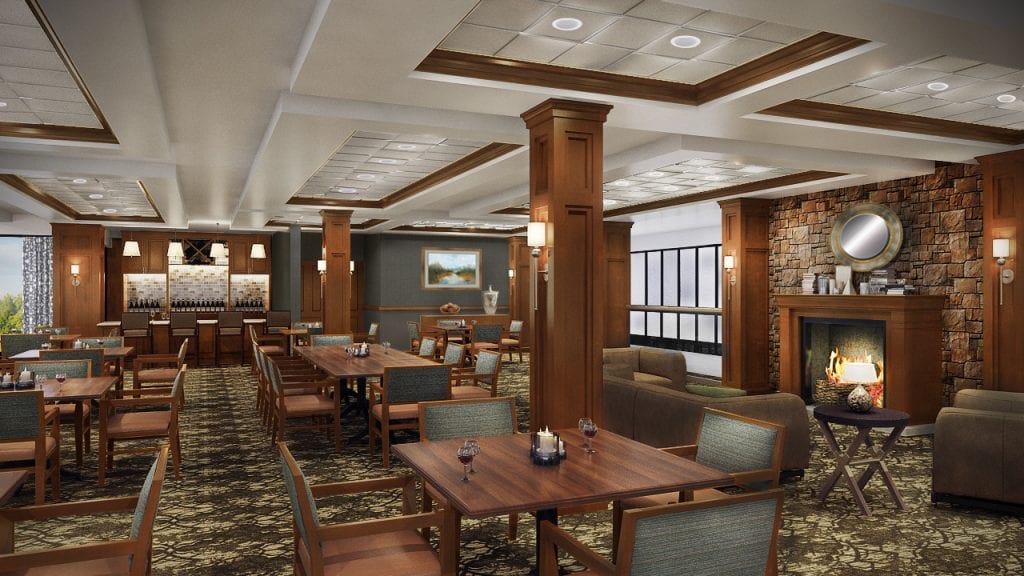 A fireplace will be added to the Great Lounge at The McAuley, creating a homey atmosphere to a space where residents enjoy a daily happy hour. Courtesy photo 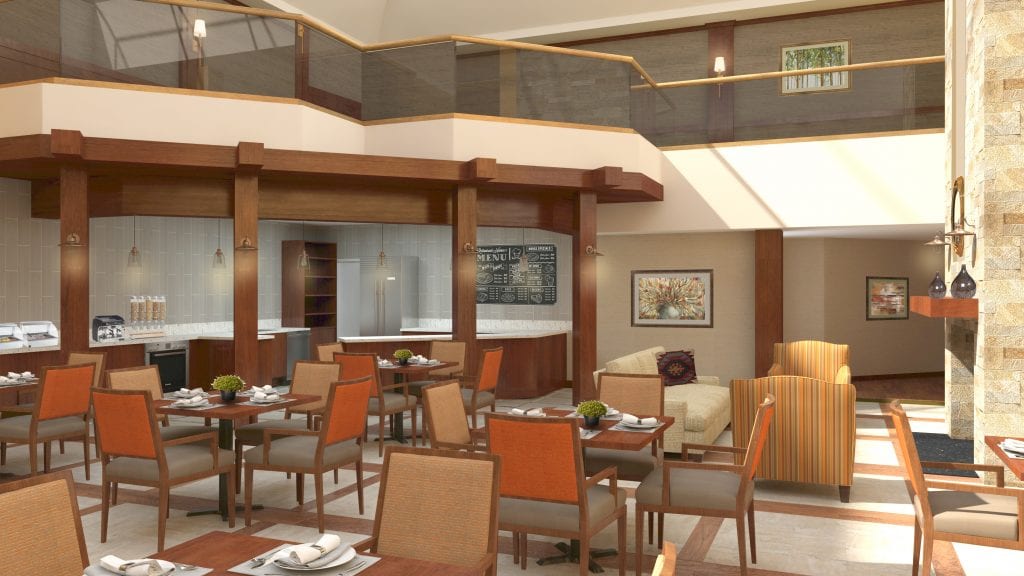 The McAuley Cafe is already a popular spot, but should become even more popular after a makeover. Courtesy photo 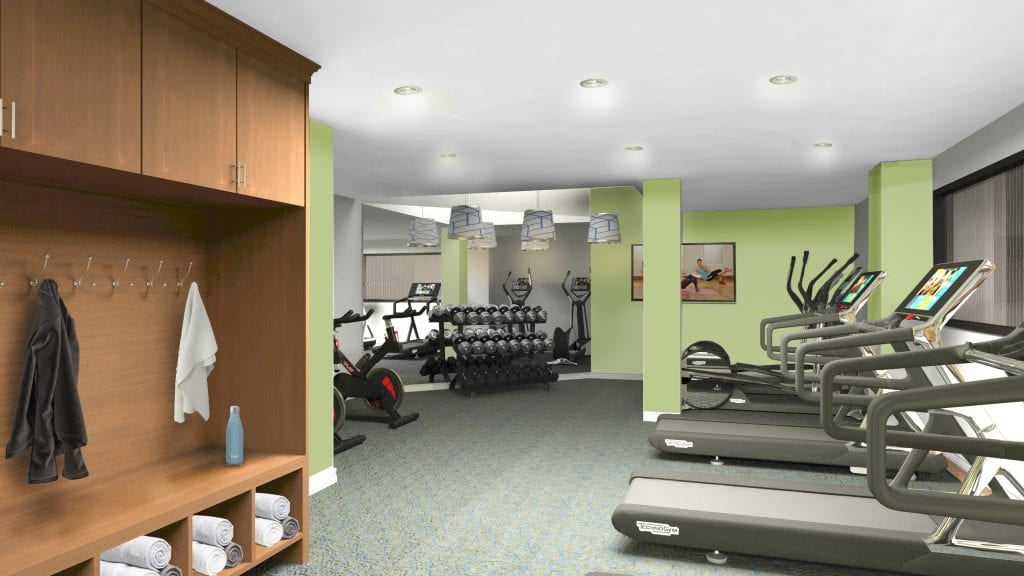 The existing fitness room at The McAuley is getting a makeover. Courtesy photo 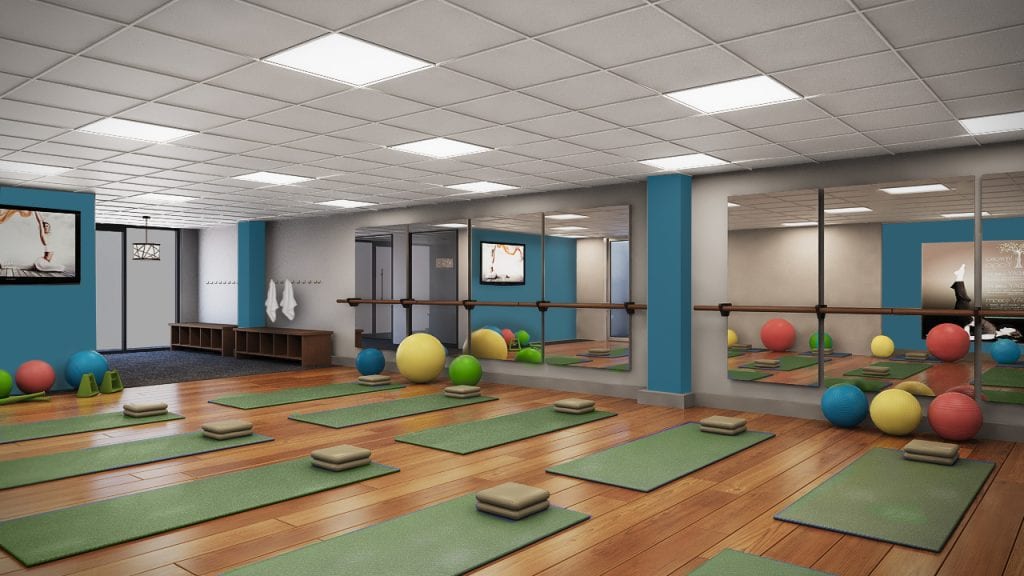 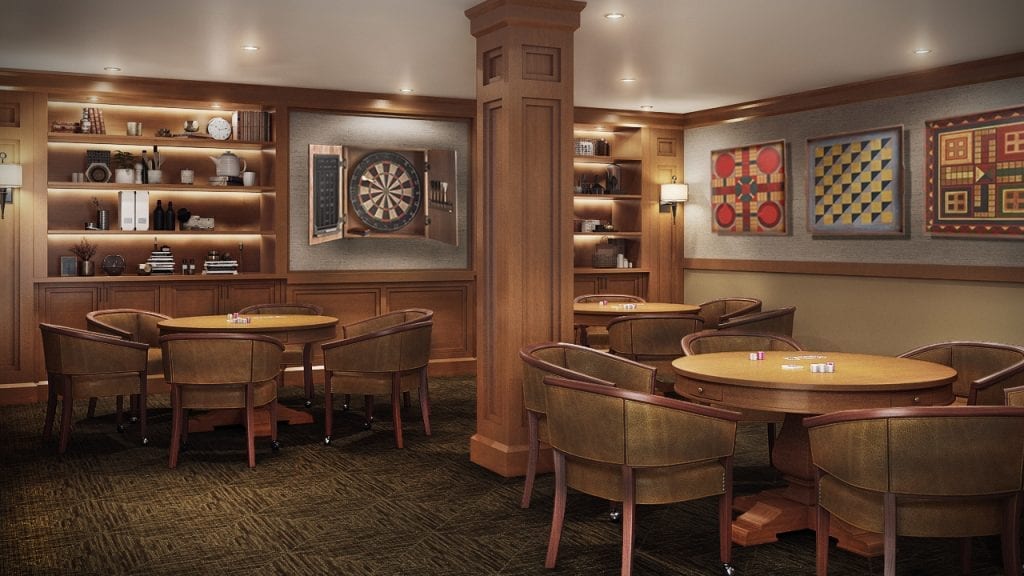 Rendering of the new ‘Card Room’ at The McAuley. Courtesy photo 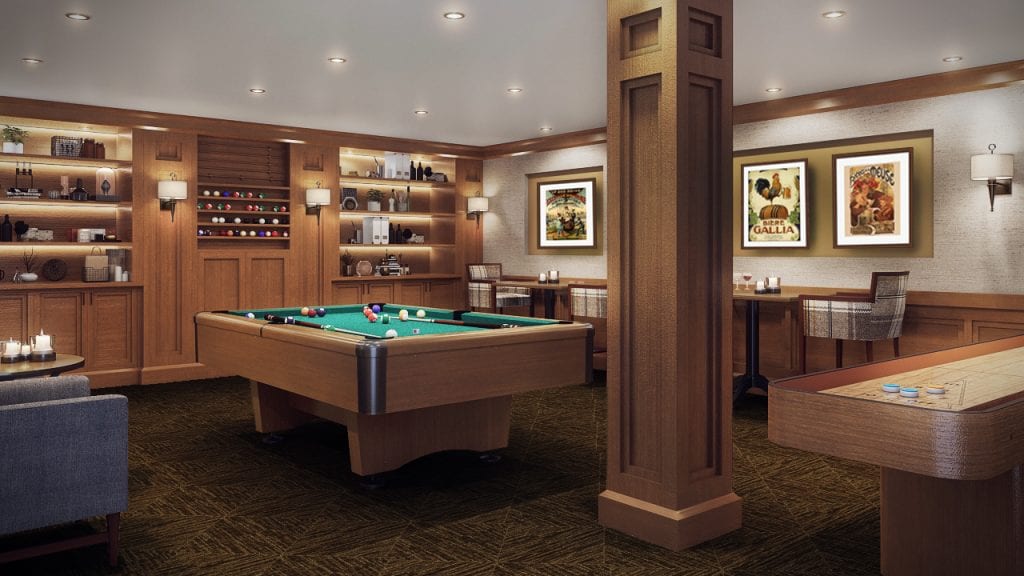 The game room at The McAuley is being redecorated and refurbished. Courtesy photo 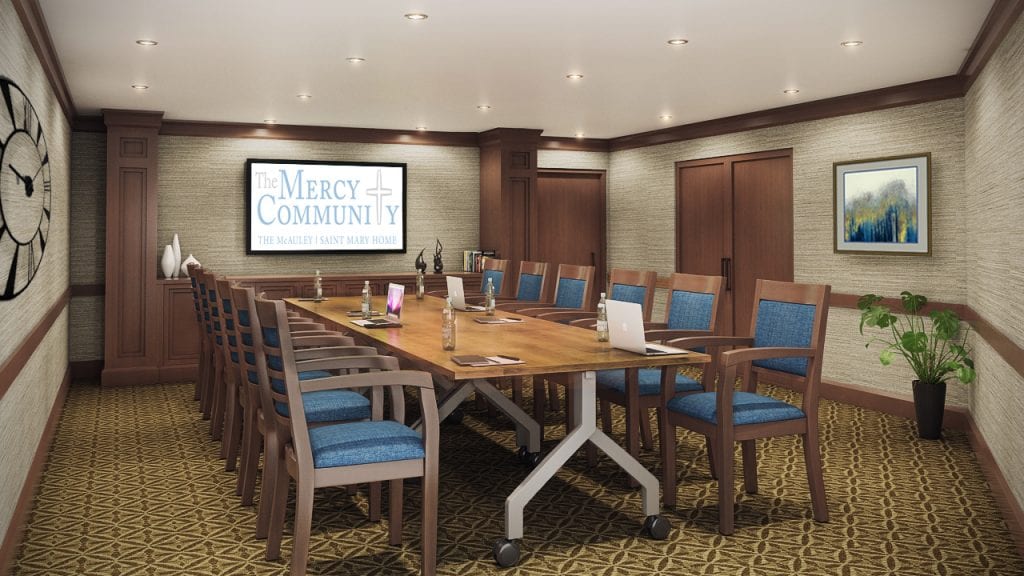 The new multipurpose room at The McAuley. Courtesy photo 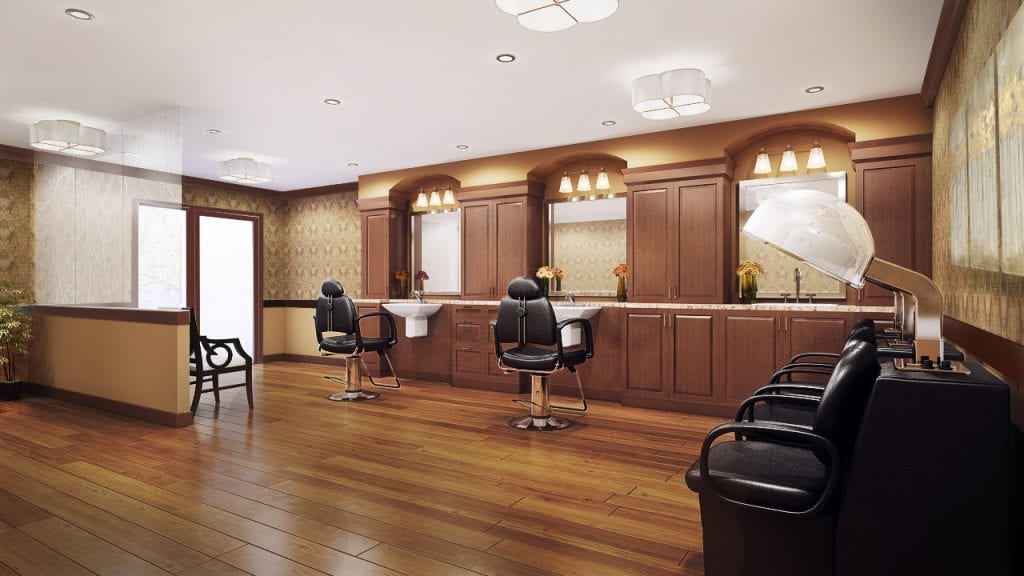 The existing salon at The McAuley will be renovated and mani/pedi stations as well as space for massage will be added. Courtesy photo 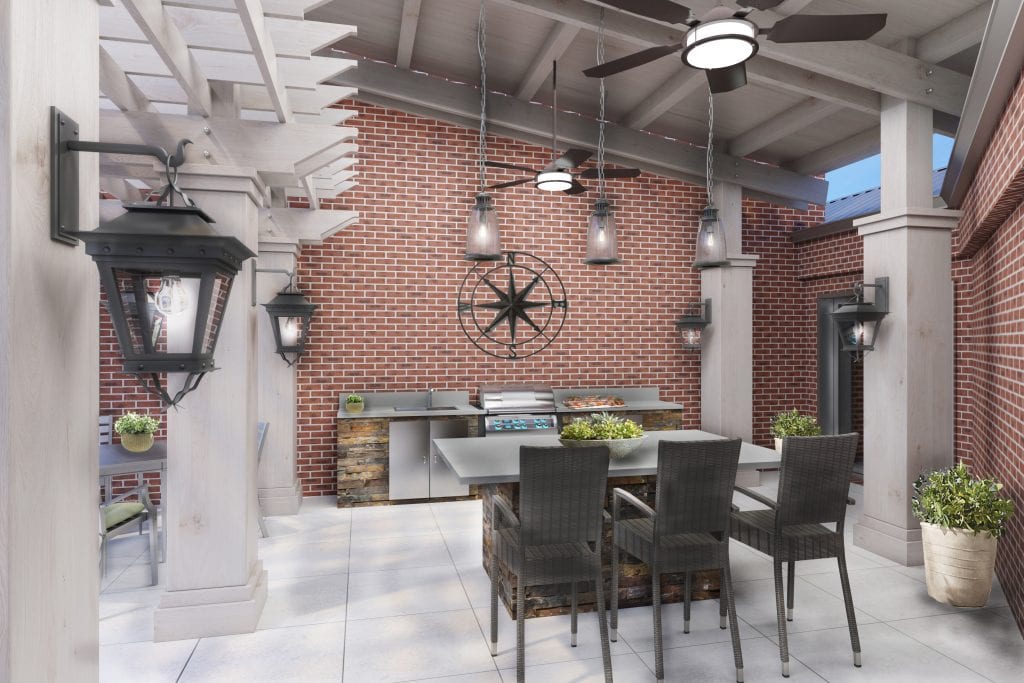 Rendering of the new Grill at the McAuley. Courtesy photo 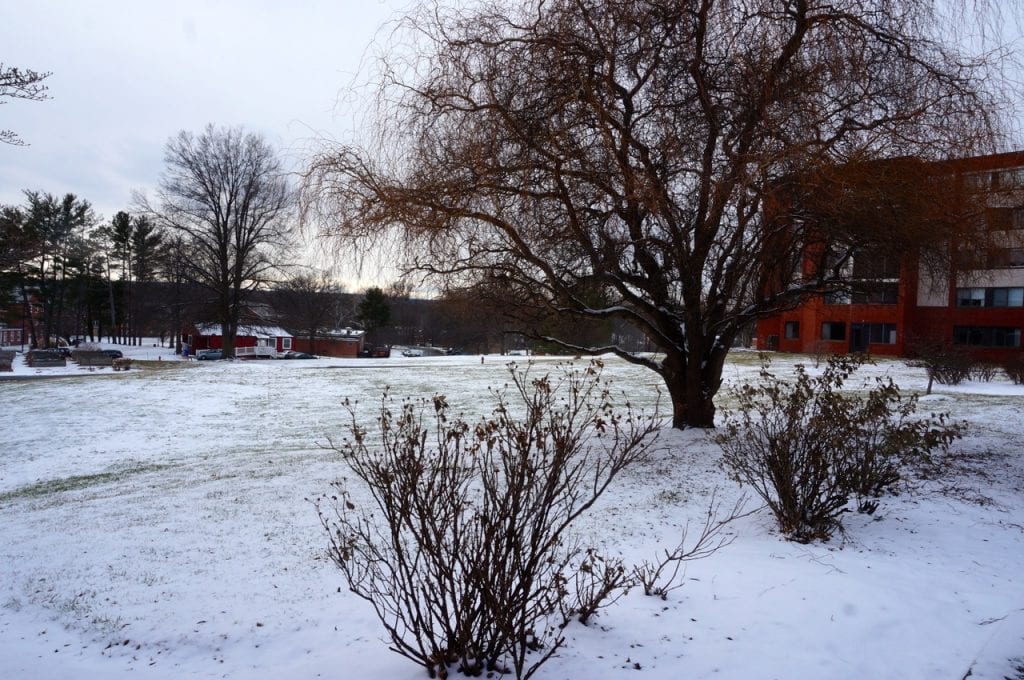 A large patio and putting green will be built at The McAuley, adding outdoor space for residents to enjoy. Photo credit: Ronni Newton 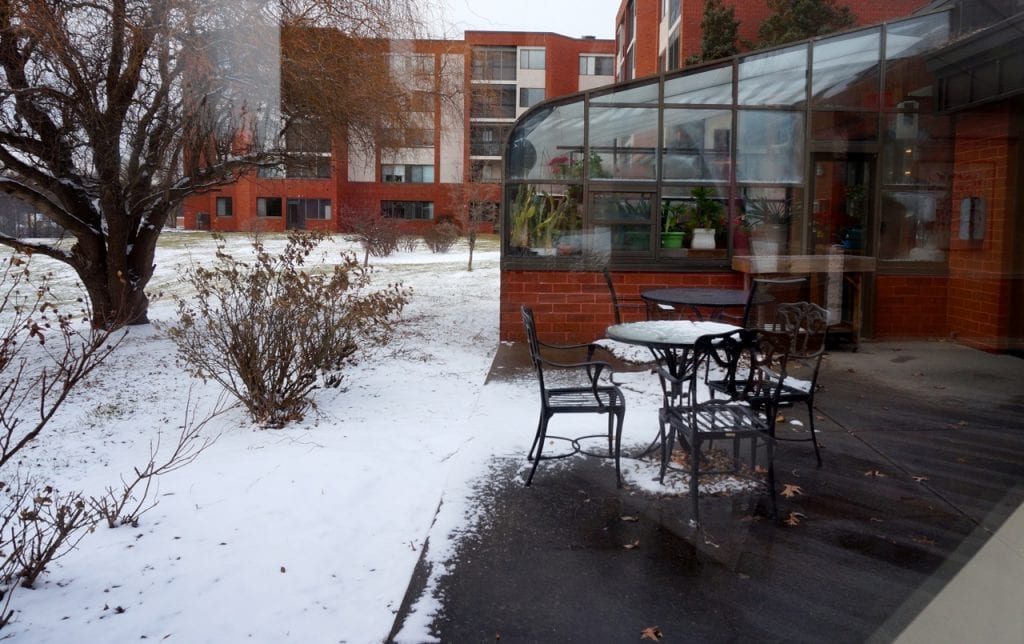 The existing small patio will be replaced with a large patio that will wrap around the greenhouse. Photo credit: Ronni Newton