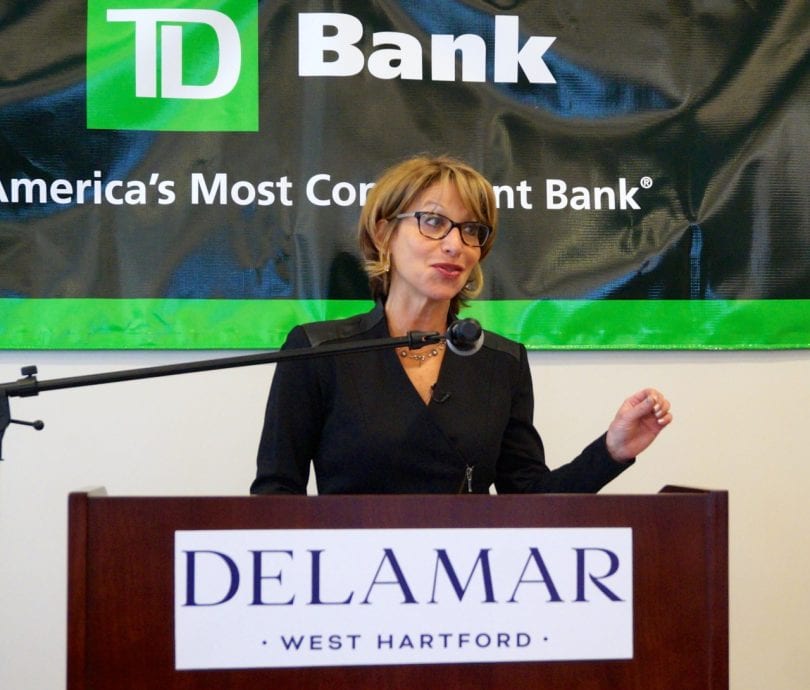 Mayor Shari Cantor, in her annual address at a sold-out Chamber of Commerce luncheon, said that the West Hartford ‘remains a bright light’ in the region, with an ‘innovation factor’ that will best position the town to manage its future.

West Hartford Mayor Shari Cantor said she is reminded every day of how privileged she is to be the mayor of the remarkable community where she was born and raised, and she hears anecdotes every day about what makes this community special.

“This job as Mayor is my passion, but it doesn’t pay very well … or at all, for that matter!” she joked. “But I get incredible satisfaction from it.”

Cantor addressed an audience of 200 – a sell-out crowd – at at the Chamber of Commerce’s annual State of the Town luncheon Friday at the new Delamar West Hartford Hotel, providing the business community with vision for the town’s future as well as a look back at what was a somewhat tumultuous year.

Although things are neither perfect nor easy in an environment marked by fiscal problems at the state level – where a budget was not passed until months after the fiscal year began – Cantor told the crowd, “I am proud to say the state of our town is strong. West Hartford is vibrant, healthy and fiscally sound.”

Last year was a revaluation year, which impacted every property owner in a different way, and also a year in which Hartford considered bankruptcy prompting the MDC to bill West Hartford for the capital city’s share of the ad valorem tax, she said.

Then there was the budget roller coaster, said Cantor.

“In a good year it’s hard enough to predict what’s going to happen,” Cantor said, but a steady stream of proposed budgets from the governor and legislature, some of which eliminated the majority of the town’s state funding, created an enormous challenge for West Hartford, which had to pass its budget by the end of April.

Cantor spent countless hours meeting with the town’s legislative delegation – State Sen. Beth Bye and State Reps. Derek Slap, Andy Fleischmann and Joe Verrengia, all of whom were in the audience – and state leaders, and testifying before committees about how devastating cuts could be for the town.

“West Hartford is important to the region and these kind of swings make it incredibly hard to budget,” she said.

The budget passed by the town, which included $4.5 million in cuts, provided a $7 million contingency for cuts in state aid – which ultimately turned out to be right on target when the state budget that was ultimately adopted cut aid to West Hartford by about $6.7 million.

“Unlike some municipalities in Connecticut, we planned well … we provided stability and strategic decisions in a year that could have been extremely disruptive,” Cantor said.

Credit-rating agency Moody’s issued a negative outlook for West Hartford and 26 other communities in October, in the midst of the budget uncertainty, but Moody’s as well as Standard & Poors maintained the town’s triple-A bond rating for this month’s bond issue.

The town has recently increased its undesignated reserve fund to 9 percent, and currently has 17 percent in overall reserves, but Moody’s, which retained the negative outlook, would like the undesignated reserves to grow to 13-15 percent. “We continue to have discussions about that,” Cantor said.

As the state’s fiscal challenges continue, “We will continue to fight for ECS [Educational Cost Sharing] – our biggest share of state aid,” Cantor said, along with continuing to make tough choices.

Speaking about the schools, Cantor said, “We are unique and it’s a great and wonderful way for our children to enter the world.”

As a snapshot, children in West Hartford Public Schools this year speak 74 different primary languages at home. Per pupil spending is 128th out of 169 towns, and at the same time the town has two public high schools that continue to be tops in the nation.

“We should be an example and not penalized for our success,” Cantor said.

Highlighting some of the major transitions in 2017, Cantor noted the hiring of Matt Hart last summer as town manager following a national search. “We wanted to attract the best candidates from the region, the state, and the nation, and after four months of carefully considering all of the candidates, that is exactly what we got,” she said.

The town has just started the recruitment process for a new police chief after Tracey Gove left in late November to become chief of security for The Travelers.

Another major transition in 2017 was the West Hartford Fire Department’s taking over paramedic services. In the first year they responded to 6,000 emergency medical calls, 49 percent of which required advanced life support intervention. The average response time of 3:13 minutes was significantly less than the former arrangement.

Management changes at Cornerstone Aquatics Center and Veterans Memorial Skating Rink, change to an online “omit” system for notifying the police about overnight parking requests, and the upcoming transition of the restaurant at town-owned Rockledge Golf Club to Beachland Group were also noted.

“Connecticut is facing a trash crisis,” Cantor said, which is an environmental as well as an economic issue. The town began several initiatives in 2017, including a move to weekly curbside recycling, the addition of textile and pumpkin recycling, a special cardboard and electronics recycling after the holidays, and implementation of the WasteWizard recycling app. A pilot food waste recycling program resulted in the collection of 10 tons of food waste from 130 households in just four months – which was turned into enough energy to power 750 homes for a year.

“Incentive Zoning,” an ordinance passed following an extensive community engagement process, will enable slightly larger mixed-use buildings in the Center provided certain amenities or other “incentives” are part of the project. “This is really important for the future of the Center,” Cantor said.

In addition, the Town Council adopted an “Experiential Retail” ordinance which will allow some of the larger spaces in Blue Back Square – such as REI which will be vacated when the store moves across town – as well as spaces in the industrial zone to combine recreation and restaurant operations. “Hopefully this will allow for some of those spaces to be used in unique ways,” Cantor said.

Cantor said that 40 new businesses either opened in 2017 or are poised to open soon – and the Chamber’s Economic Development Luncheon on April 26 will highlight those.

A few specifically mentioned by Cantor included the location of Friday’s luncheon. “The Delamar West Hartford really does change the region,” she said.

In addition, The Corbin Collection is scheduled to open in mid-2018, bringing Saks Fifth Avenue Off 5th, Cost Plus World Market, buy buy Baby, REI, and Shake Shack to the former Sears property in Corbin’s Corner.

Transit-oriented development is in the works with the near-completion of 616 New Park, and a community engagement process will soon begin for the former UConn campus.

“This is breaking news,” Cantor said, as she announced; “The McAuley is embarking on a lifestyle evolution.”

Trinity Health Senior Communities is making a $4.3 million investment in the property to add a fitness center, spa and salon, outdoor dining, and a pub-style feature “The 19th Hole.” Construction is slated to begin in two weeks, Cantor said, and plans are to have it completed at the end of June.

“It’s important for us to be ambassadors for the region,” Cantor said, as there has been good news for the Greater Hartford economy such as Aetna remaining in Hartford, hiring at UTC and Jackson Labs, and great things happening with support for the start-up culture.

While crime in West Hartford is down, Cantor said, vehicle thefts are up and there has been an increase in overdoses related to the nation’s opioid crisis. “We have a growing need for social services,” she said.

“We have some challenges ahead and we all know that,” Cantor said.

The top challenges the town will face in the next five years include the state budget and the condition of Hartford’s finances, and how they will impact the town.

Economic development that makes sense for the town needs to be encouraged, while at the same time maintaining a focus on traffic and transportation concerns, Cantor said.

Regionalization to increase efficiencies, health care and pension costs, and the impact of the cap on deductibility of state and local taxes (SALT) will also pose challenges.

It will be important to develop revenue sources other than income and property taxes, Cantor said.

The state’s population is decreasing, and will be further decreased by new immigration policy. “If immigration is reduced, Connecticut is going to feel it … it’s going to affect our vibrancy [in West Hartford],” said Cantor.

“Millennials are the largest generation,” she said, but Baby Boomers have the most buying power.

Many Baby Boomers want to use the value of their assets – their homes – for their future lifestyles. Older Millennials are ready to buy houses and start families, in diverse communities with good schools.

“What’s an important issue is to keep attracting those Millennials who are ready, and allowing those Baby Boomers to move on,” Cantor said. West Hartford needs to be able to allow its empty nesters to have choices.

“These two large markets are driving many new developments and looking for many of the same things – easy living, vibrancy, safety, updated appliances, and easy care,” as well as easy-to-use transportation options.

For West Hartford, there continues to be good news in the real estate market overall, with a median sales price increase of 3.68 percent and volume up 5 percent, and an especially strong market in neighborhoods close to the Center. Challenges remain, however, for sales of homes valued at $1 million and up, Cantor said.

The creation of incentive zones will help provide more opportunities and protect the quality of life.

In addition, Cantor said that recent changes in the industrial zone will appeal to and attract Millennials as well as empty nesters, citing New Park Brewing, the soon-to-open Gastro Park, and food trucks as examples.

Cantor shared numerous anecdotes of people she has spoken with who have recently moved to West Hartford – a diverse group that includes recently-graduated engineering students from Rice University in Texas; a couple from Hartford with several children; a young couple and an older couple from Brooklyn who both noted the town’s vibrancy, walkability, diversity, and relative affordability; the director of a major medical institution who came from San Francisco; and empty nesters from more rural Farmington Valley towns.

“We have a diverse group of residents that desire what West Hartford has to offer – safety, great schools, amenities, a well-run town, and vibrancy,” Cantor said, citing the many awards and accolades that the town has won in recent years.

Change is necessary for innovation, creativity, and improvement, she said. “We need the courage and foresight to manage the change that is inevitable.”

Cantor’s speech was so detailed that there were no questions from the audience, but as she concluded there was a rousing round of applause and a standing ovation.

West Hartford Community Television streamed the speech, and it can also be viewed on their website by clicking here. 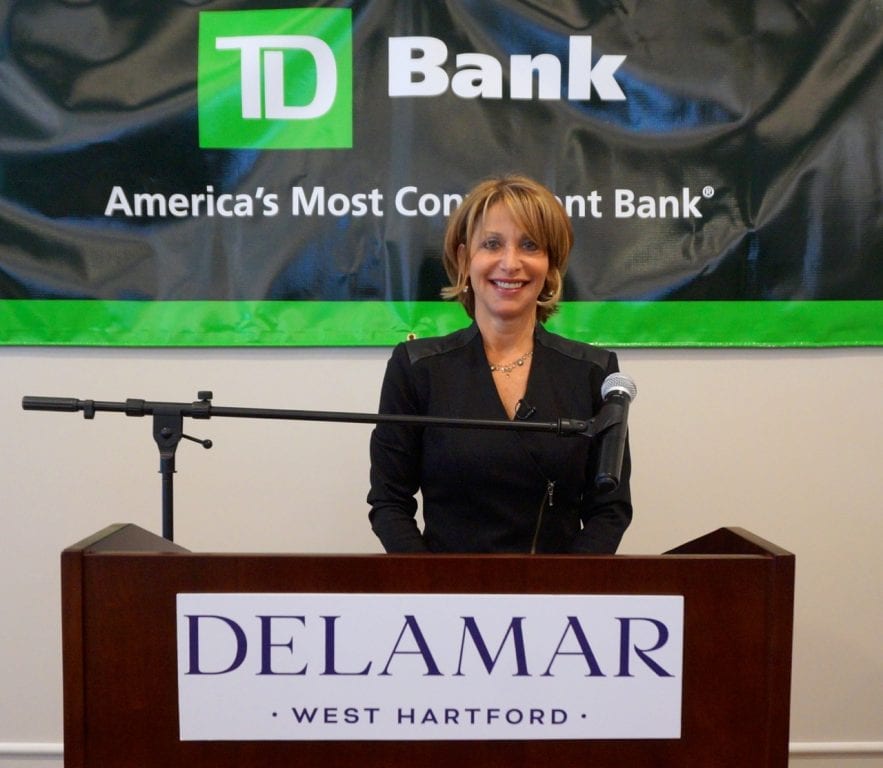 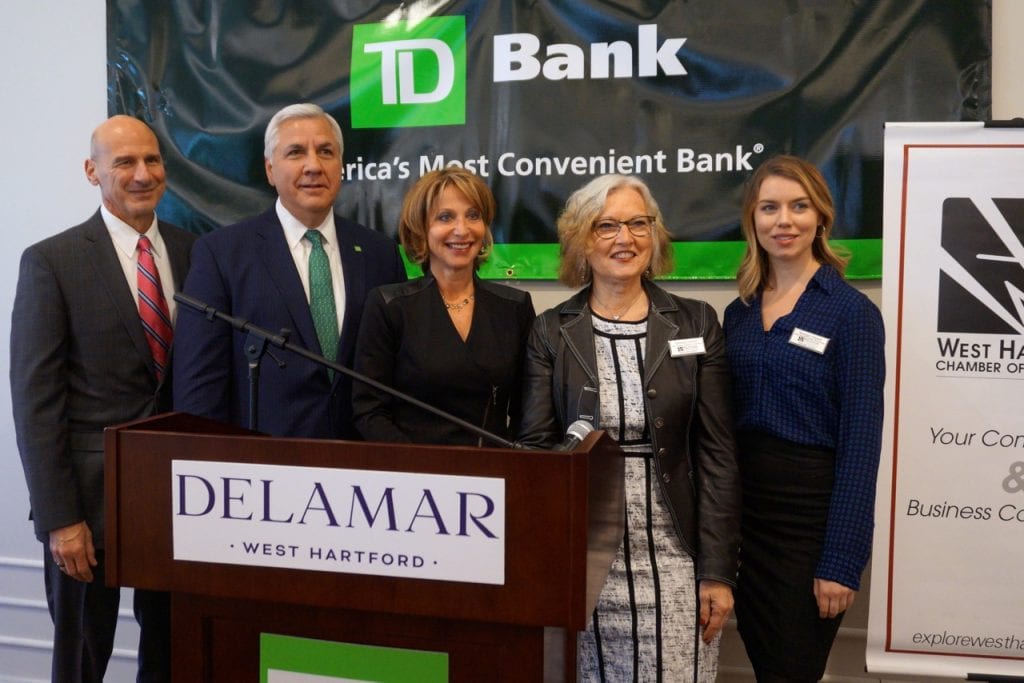 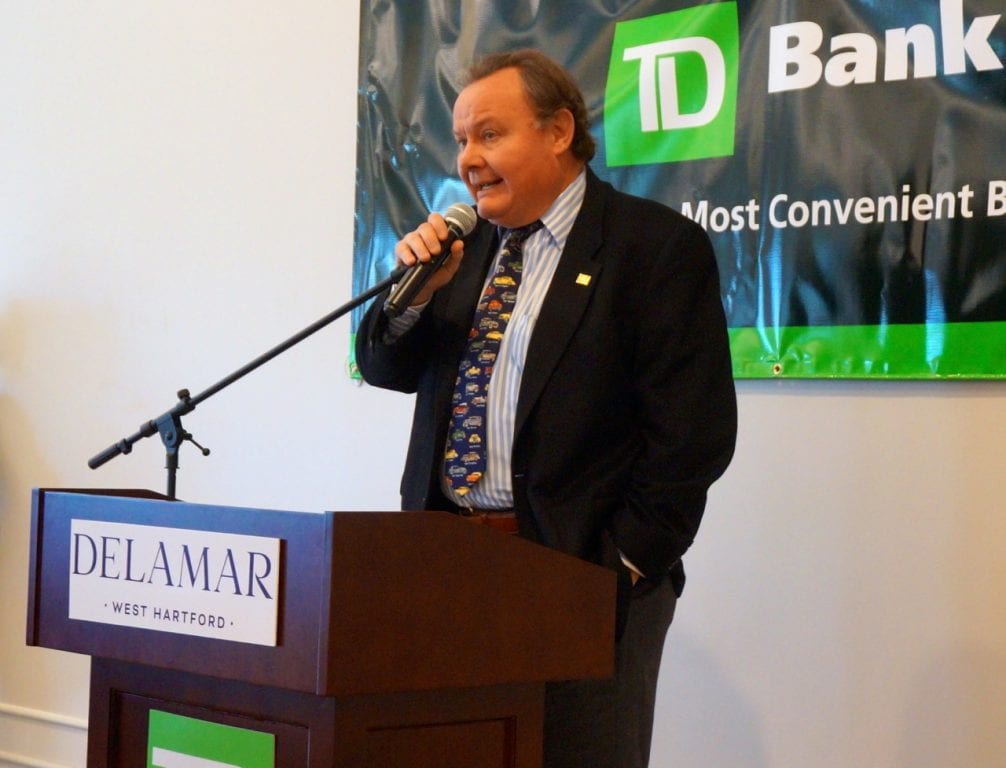