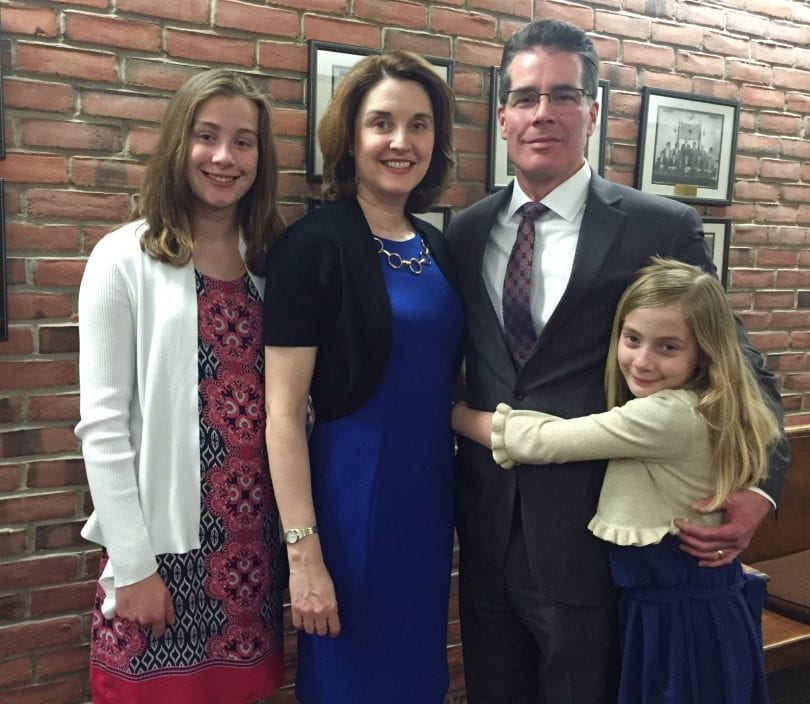 The Town Council announced last week that Hart, 52, the current Mansfield town manager, had been chosen to succeed West Hartford Town Manager Ron Van Winkle who announced in November that he would retire at the end of June after 30 years of employment with the town.

Hart attended Monday’s meeting with his wife, Kara, and daughters Sophie (13) and Claire (10). Also in the audience were Hart’s in-laws, John and Anne Walsh, who are already West Hartford residents. 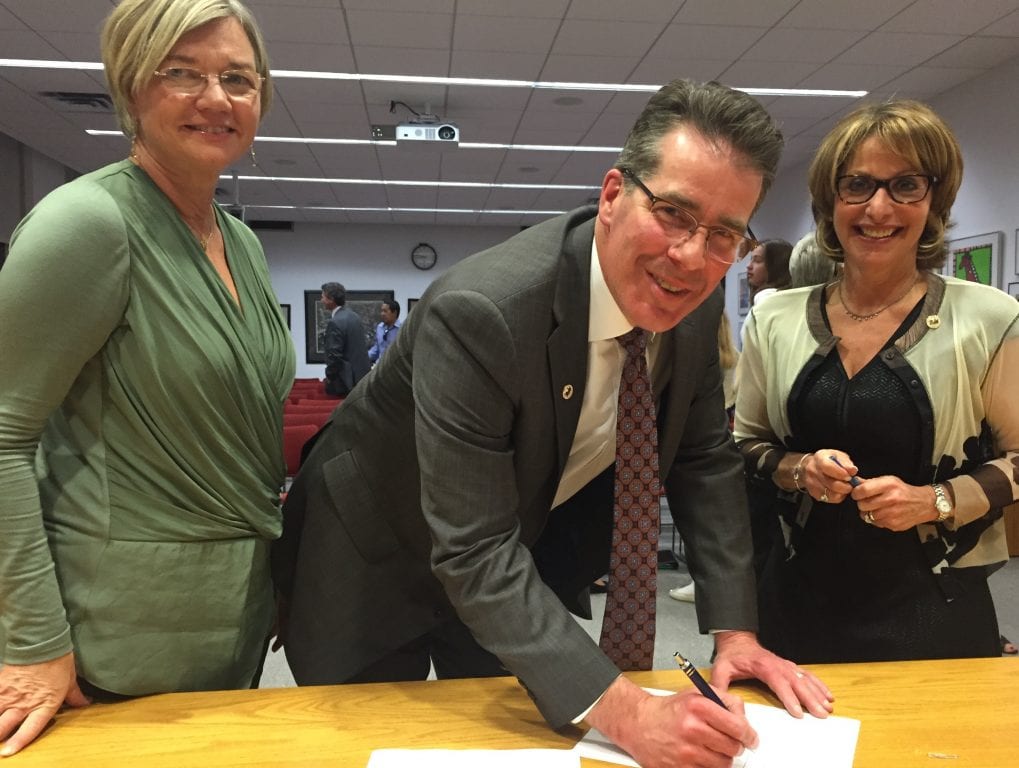 Following the vote, Hart addressed the Council and the audience, thanking them for having confidence in him. “I do realize that this is a challenging time to work in state or local government in Connecticut and that the Town of West Hartford certainly has its own set of issues and challenges to address. However, with its diversity, its strong financial base and local economy, its talented local staff, and its engaged elected officials and community members, I think we are very well positioned to meet and address these challenges,” Hart said.

Hart said he really loves his profession, and local government. “I clearly feel that you are Connecticut’s premier suburb and premier local government and it’s really those things that drew me to this position.”

Not in every profession can you say you have the opportunity every day “to make the community a better place to live in, to work in, to learn in, and to play in,” Hart said.

Hart said as he prepares to take on his new role on July 31, he plans to reach out to get to know key  stakeholders and get up to speed on all issues. When he begins his job, Hart said he plans to solicit input to set new goals and objectives.

What he sees as priorities are: building a strong working relationship and maintaining open lines of communication to work in a non-partisan manner; working to manage the community’s assets – people as well as financial – “in a truly responsible and sustainable way” with responsible budgets; building on the legacy of Town Manager Ron Van Winkle and his predecessors Jim Francis and Barry Feldman “to promote a culture that emphasizes innovation, that emphasizes best practices, that emphasizes a return on investment for our residents and for our taxpayers”; and “always work[ing] to vigorously uphold the town’s code of ethics and your commitment to diversity.”

Before the Town Council made it official with a vote, Mayor Shari Cantor outlined the process by which Hart was chosen, and Council members also shared their thoughts.

Cantor thanked Assistant Director of Human Resources Pat Morowsky for her incredibly hard and professional work in helping West Hartford undertake the first nationwide search for a town manager in more than 30 years, as well as Public Relations Specialist Renée McCue for her work in developing the town’s profile. 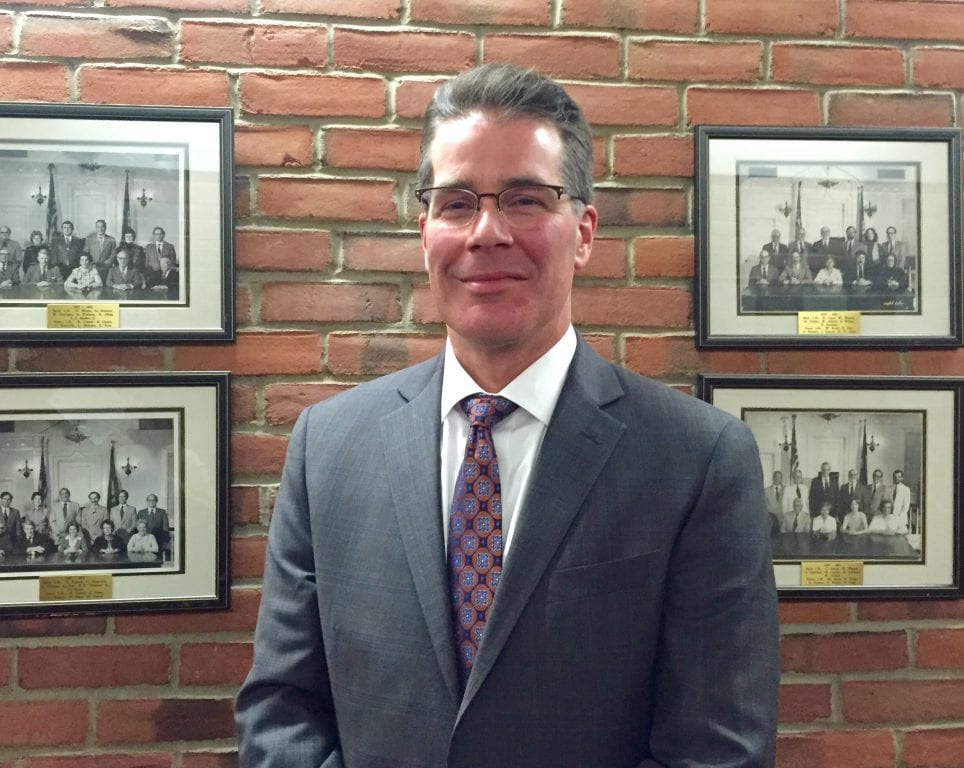 The job was posted on multiple state, regional, national, and international sites, and ultimately 25 applications were received – from 22 men and three women, from 13 different states, Cantor said. Follow-ups were done with eight of the candidates, and five were interviewed.

“There was one candidate that really checked all of our boxes,” Cantor said, referring to Hart. She said he was incredibly prepared for the interview, had done his research, and was always thinking one step ahead.

Hart has been town manager in Mansfield, CT, which has a population 26,453, since 2006. He began his employment with Mansfield in 2000 as assistant to the town manager and was promoted to assistant town manager in 2002 before being chosen for the lead role after a national search to replace Martin Berliner, who retired after 27 years in the position.

Prior to that, Hart worked as assistant to the Windsor, CT town manager from 1997-2000. He also has private sector experience and is a veteran of the U.S. Army (1987-90) and U.S. Army National Guard (1990-94). He is one of only 12 credentialed International City/County Management Association (ICMA) managers in the state, and has a bachelor’s degree in political science from the State University of New York at Pottsdam and both a JD and master’s in public affairs (MPA) from UConn.

Although Mansfield is a much smaller community, Cantor said the town that is also home to UConn’s main campus at Storrs faces many of the same demands, including diversity, balancing the demands of housing and nightlife, and traffic. Hart played a “critical role in the development of Storrs Center, a mixed-use, New Urbanism project” that is adjacent to the UConn campus, and has strengthened Mansfield’s financial position “through sound budgeting, capital planning, and debt management.”

Cantor also said that as she learned more about Hart, she was even more impressed by what people who had worked with him for a long time had to say. Words they used to describe Hart include “utmost professional,” “smart,” “ethical,” “always engaged,” “organized,” “trustworthy,” and “punctual.” He is also very keyed in to state issues, she said.

Key business leaders in West Hartford also had a chance to meet with Hart during the interview process. Cantor said that Rick Liftig, a West Hartford dentist who is president of the Elmwood Business Association, commented that the town needs a “town manager who is slightly ahead of the town but knows not to get too far ahead, and I think Matt is that person.”

According to Cantor, West Hartford Chamber of Commerce Executive Director Barbara Lerner said that while West Hartford and Mansfield are different in some ways, “they share the same values: education, public safety, economic development, and community engagement,” and Hart will be able to preserve those values but bring a fresh perspective.

“I think we have the best candidate for the job to meet West Hartford’s needs,” Cantor said.

Hall said that while the Town Council sets the policy, it’s the town manager’s job to implement it and trust is key. There are a lot of things that have been going well in West Hartford, but also many challenges in what is a 24/7 job.

Hall said that although the search was national in scope, it became clear to her that it was important to have someone in the town manager role who understood Connecticut. “Matt not only understood but was proposing solutions,” she said.

The Town Council’s unique mission – to find the town manager for the next generation, could not fail because it was too important, Davidoff said. “I would say that the job of being West Hartford’s town manager is the hardest job in West Hartford,” he said, because it means answering to not only the nine Council members but also the more than 60,000 residents who, while largely professional and reasonable, want a truthful answer in a reasonable amount of time.

Council member Judy Casperson, who attended the meeting via phone from Dublin, praised the selection process. “I really feel that the choice we have made for our town and the future is one that you will all be proud of.”

Republican Council member Chris Barnes said that while he completely concurred that Hart was a great hire, he had concerns about the compensation package being a huge investment for the town at a time when there are major budget concerns.

Barnes said it was important “that changes were made from prior contracts, including the elimination of an annual buy-out for up to 20 vacation days per year, the elimination of sick day buy-out for up to 75 days at contract termination, and includes participation in a defined contribution pension plan …  in the end, the compensation package is competitive to our neighboring communities and includes changes we can use in future contract negotiations.”

Hart will earn an annual salary of $165,000. Details of his compensation package can be found in his 25-page employment contract now posted on the town’s website.

Council members extended a warm welcome to Hart as well as his family. Chris Williams specifically addressed Hart’s daughters, telling them that one of the most important facts about West Hartford is how many pizza places there are. “You should focus on choosing your favorite,” he told the girls.

Williams also praised Hart’s commitment to being non-partisan, and the flat budgets he has achieved on several occasions, adding that West Hartford needs to work toward that goal.

Council member Beth Kerrigan told Hart’s family that it’s easy to make friends in West Hartford, and that the community is welcoming to all.

“It’s tough to fill Ron Van Winkle’s shoes, but when I talked to people who knew you … I could not find one person who had a bad thing to say about you,” she said to Hart.

Council member Dallas Dodge said the town manager’s job is really a CEO, and Hart will be in charge of 60,000 paying customers who expect access and answers. In a perilous time for Connecticut’s suburbs, Dodge said we “need someone who can hit the ground running and Matt is that person.”

Council member Ben Wenograd said he has known Hart for 17 years, when he was the “new young guy” working with Mansfield Town Manager Martin Berliner. He said he’s always considered Hart as “one of the good ones,” who could see the bigger picture and was always looking for solutions.

When he heard that Van Winkle was retiring, Wenograd was rooting for Hart to apply, and when he did, Wenograd said he was not surprised that Hart had prevailed.

And an even bigger challenge than choosing a favorite pizza place, he told the Hart family, will be deciding which side of town –  Conard or Hall – to live on.

“You made the right decision,”  Van Winkle told the Town Council. He said that Hart’s name came to him immediately as a candidate. “I’m glad to see you came to the same conclusion.”

Hart said he is looking forward to getting started. “I look forward to serving the community for many, many years to come.” 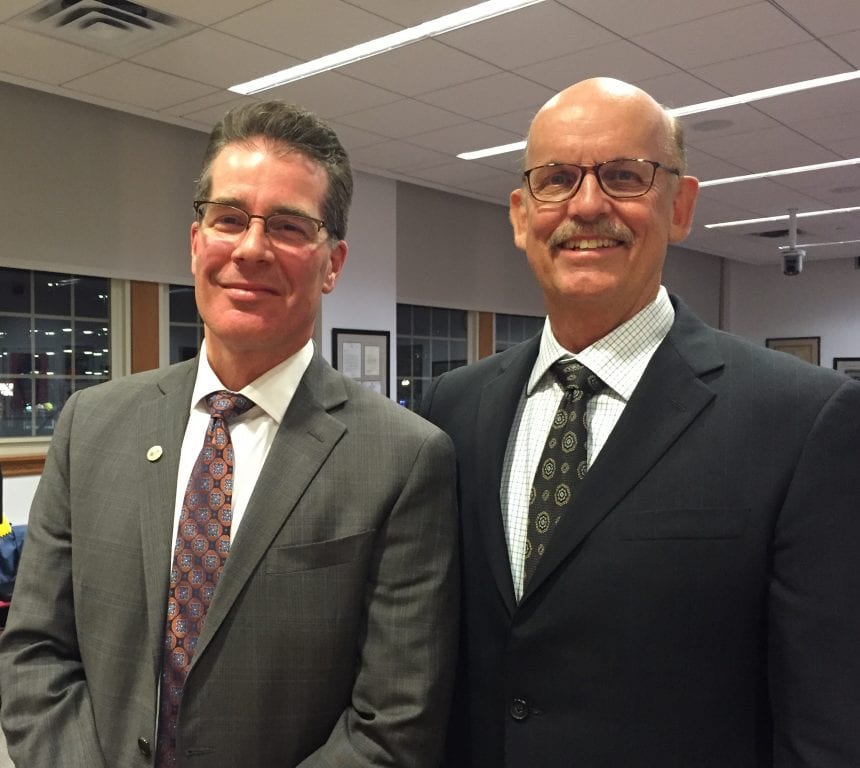