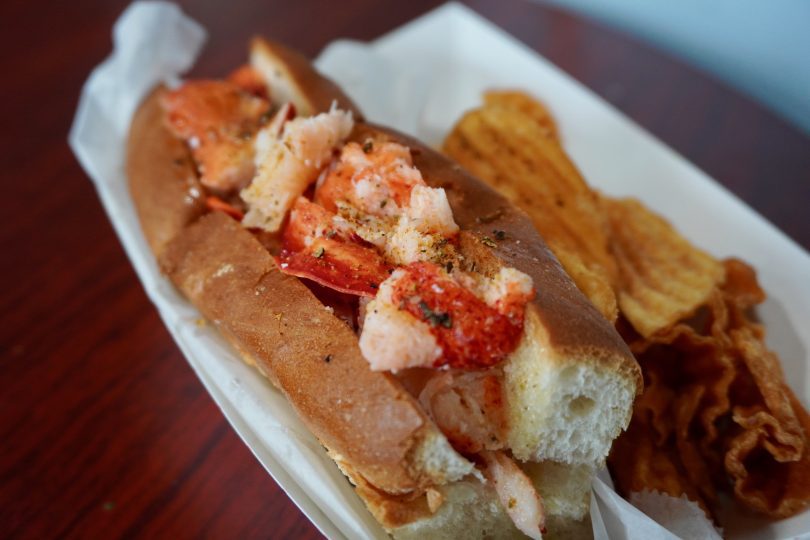 LobsterCraft officially opens at 981-A Farmington Ave. in West Hartford Center on Friday, Sept. 3, with a grand opening planned in several weeks. 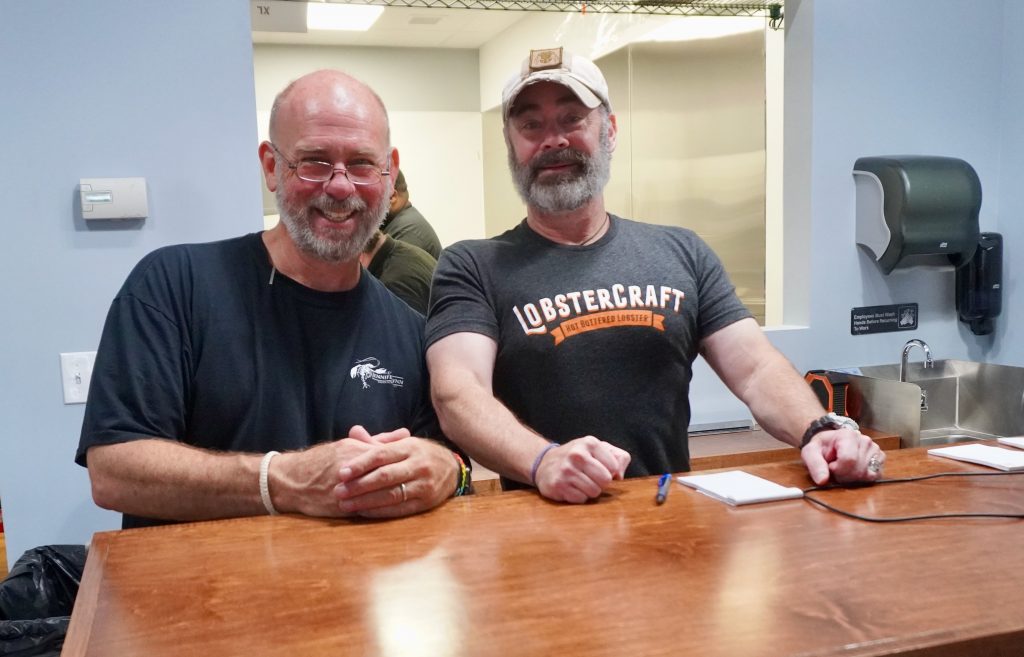 LobsterCraft’s owners pride themselves on quality, and the time they spent getting the West Hartford restaurant ready to open, like the efforts they take ensuring top-quality ingredients are used, are critical to the reputation that Michael Harden (aka “Captain Mike”) and Tommy Gordon have built for their business.

The two share duties at the helm of LobsterCraft, first spawned with a food truck in 2012 when Harden, a Coast Guard captain and licensed commercial lobsterman, was looking for an alternate way to make a living in the lobster industry. They announced plans to open on Farmington Avenue in West Hartford Center last October.

“We pride ourselves on using A-class lobster, on freshly-baked bread, with our own butter sauce,” said Gordon, a longtime friend of Captain Mike with a background on Wall Street and as a businessman in Asia. “That’s what differentiates us.”

LobsterCraft unlocked the door on Wednesday, opening very quietly as the remnants of what was originally Hurricane Ida began to rain down on the area. A few patrons wandered in, but staff is still training and Friday will be the official soft opening. 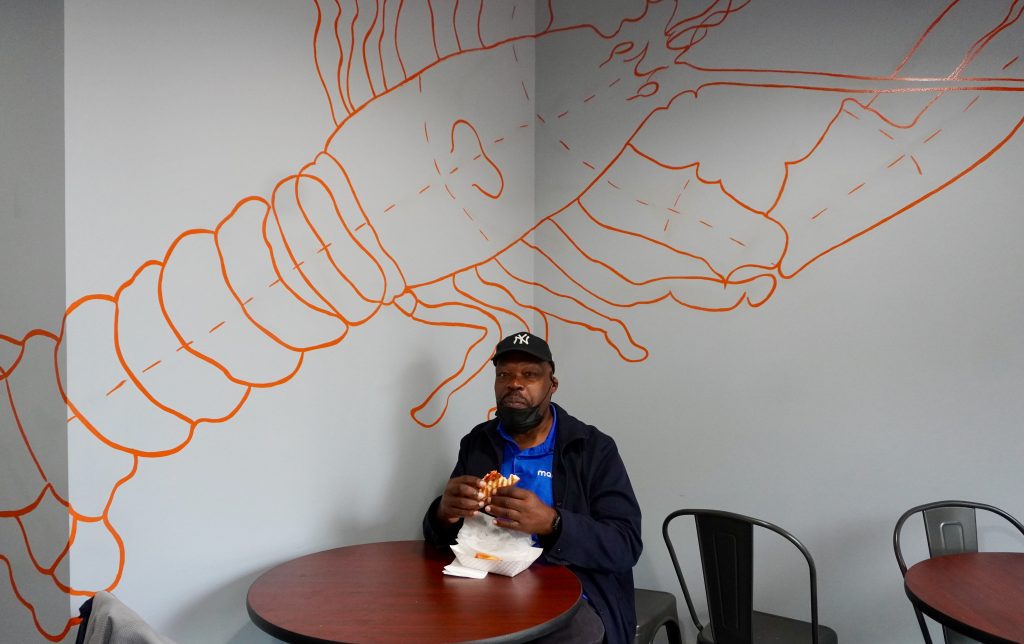 “It was fantastic,” said Michael Maughan, as he savored his lobster roll. Maughan recently moved from West Hartford to Hartford. A lobster aficionado, he said he spends the summer sampling lobster rolls throughout New England.

“Everything is very, very fresh,” said Matthew Cutrone, a chef for 25 years who is the manager of the West Hartford location. Cutrone, who started three weeks ago, is looking forward to growing his career as LobsterCraft expands.

The West Hartford space, at 981-A Farmington Ave. in the Center, is the third restaurant and fourth location for LobsterCraft, plus they still have food trucks, one of which has visited GastroPark in West Hartford on multiple occasions. The other brick and mortar locations are in Greenwich (107 Greenwich Ave.) and Fairfield (1814 Post Road), and the kitchen is in South Norwalk. 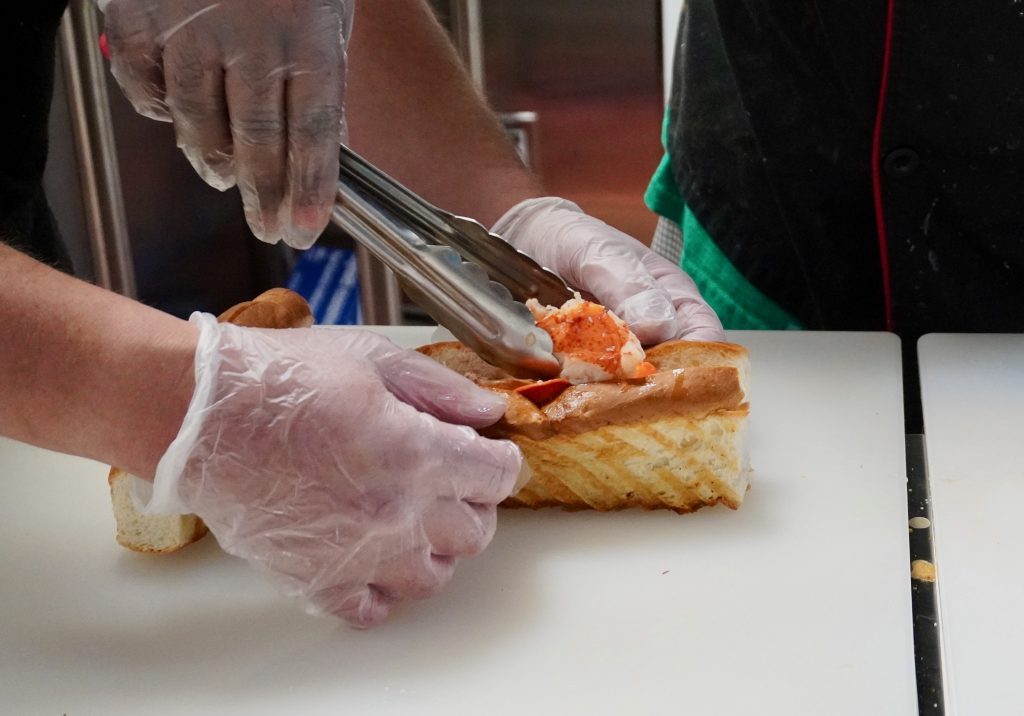 They’re planning to soon sign a lease in Sarasota, Florida, Captain Mike said, and will continue to expand the business.

Other than the sweet potato and regular fries, the cooking is all done in the South Norwalk kitchen and then transported to the restaurants where the final preparation is completed to order.

Captain Mike said the first lobster roll was invented in 1937, in Milford, and the hot and buttery rolls are Connecticut’s state sandwich. While the lobsters being served at LobsterCraft come from Maine, the Maine-style “cold salad” lobster roll was a later iteration of the dish. 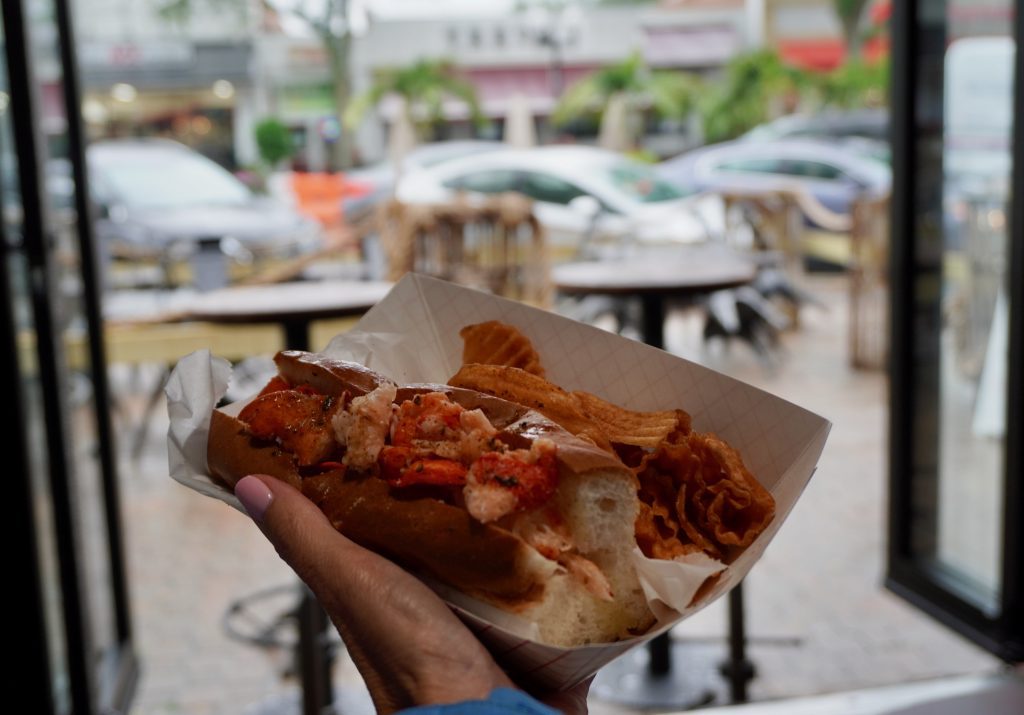 LobsterCraft’s “Coastal Roll” is the quintessential Connecticut classic – sweet lobster meet on a soft-toasted bun, topped with a drizzle of their signature ingredient, a proprietary seasoned butter sauce. It’s the lobster roll that has earned LobsterCraft accolades as the “Best CT Style Hot Buttered Lobster Roll” in the country from Food Network’s Flavored Nation.

Other menu options include:

Also on the menu are lobster tacos, lobster sliders (a trio that includes the Coastal, Heat Wave, and Dirty Maynard), mac and cheese (with our without lobster), lobster pot pie, grilled cheese (also with or without lobster), and scratch-made lobster bisque as well as New England clam chowder brimming with locally-sourced Copps Island clams. 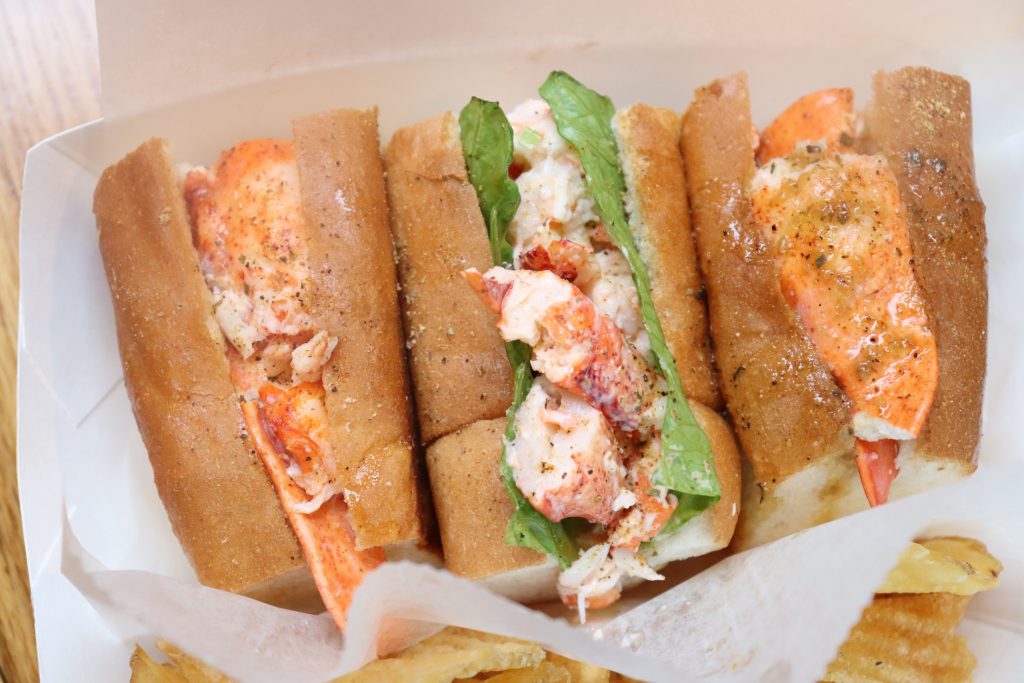 While the service may be fast, lobster rolls are not your inexpensive fast food, and changes in the lobster industry – as well as the restaurant industry as a whole – have led to price increases over the past few months. The Coastal Roll, which used to cost $21, is now $29, and that type of pricing is likely the “new normal,” said Captain Mike.

He said it’s not necessarily a bad thing, however, and the corporate structure allows the lobstermen to earn better wages. “I think it’s a good thing as long as everyone is tolerant of the prices, which they seem to be,” Captain Mike said.

He and Gordon are in the process of securing their own processing plant in the Portland, Maine area, and that will allow them to level out their pricing and be more vertical in their business model. “We hope to be up and running soon and processing our own,” Captain Mike said.

Right now some of the Maine lobsters they serve are obtained through a co-op of 18 boats, and others come from the larger lobster operations that work “out deep,” he said. 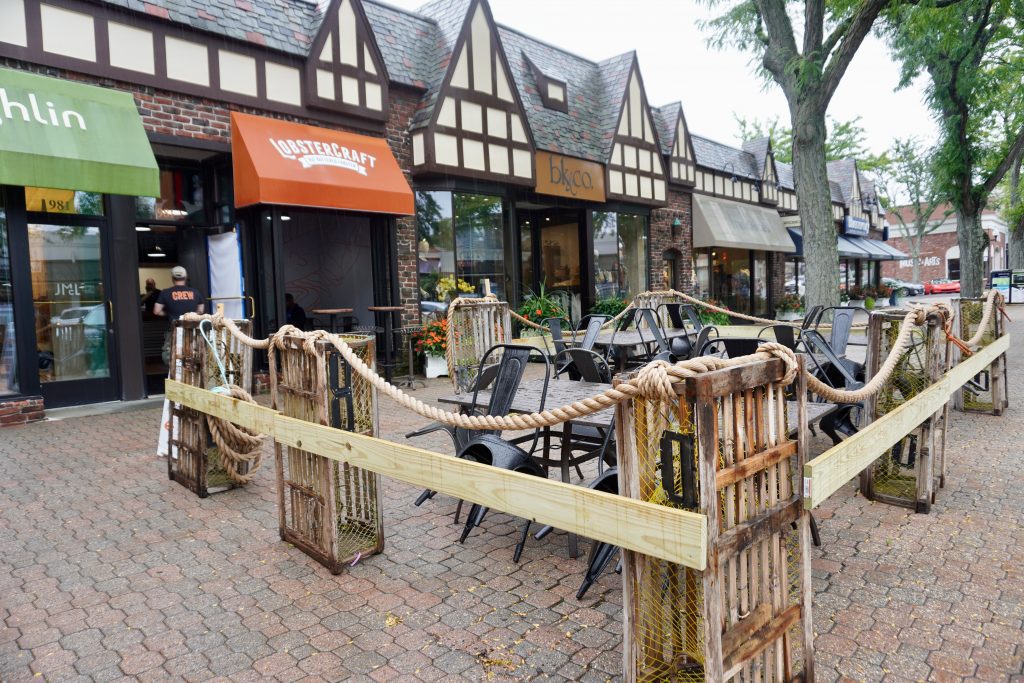 The decor at LobsterCraft, particularly the outdoor seating, can best be described as “lobster shack chic.” A dozen seats can be found inside, and the seasonal patio, enclosed by a coastal-themed rope and lobster-trap barrier, has seating for 24, including at two high-top tables where the interior window opens wide to seamlessly blend the inside and outside spaces.

Take-out will be a key part of the business as well, what Captain Mike previously described as “a luxury grab and go.”

They have perfected the delivery so LobsterCrafts lobster rolls can travel well. The meat, and a perfectly-toasted custom-baked roll, are packed in a box. The seasoned butter sauce is provided in a small cup, and can be easily heated when it’s time to eat. 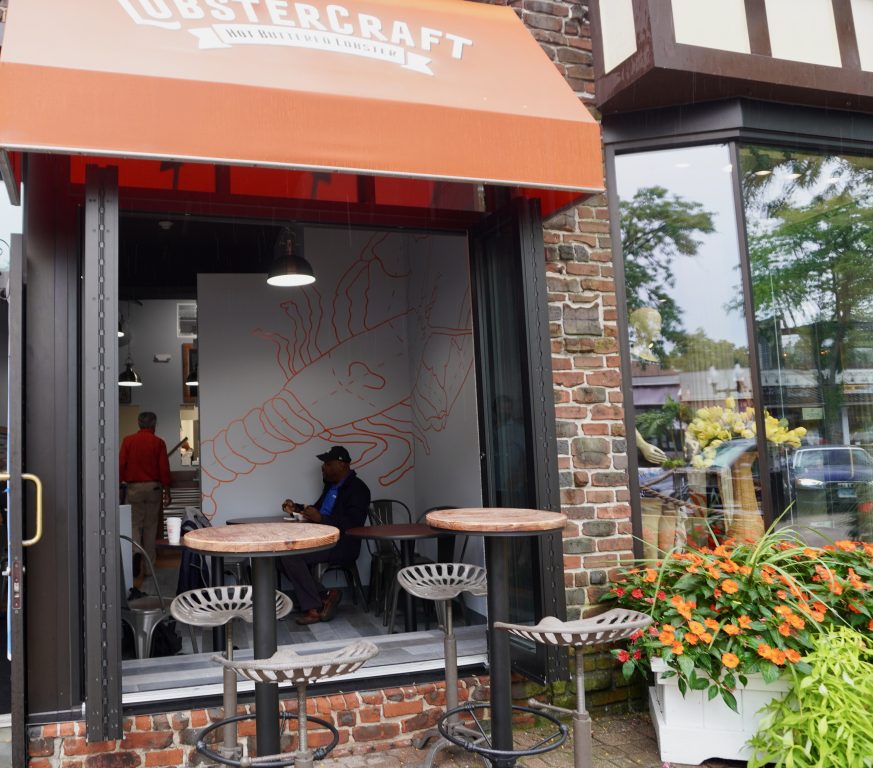 LobsterCraft, which is open from 11 a.m.-8 p.m. Tuesday through Sunday, will remain open during the winter months. “We will shift themes bit in the winter,” Gordon said, adding some more soups, pasta with lobster, and stews.

The beverage menu includes Hosmer Mountain sodas and other sodas and water. Gordon said beer, wine, and cocktails may follow in the future.

The buns (gluten-free is available as an option), and even the potato chips are made in-house, Gordon said. They’re eventually going to sell the potato chips in bags because they’ve been very popular.

“We are so excited to be open in West Hartford,” Gordon said. “We love the feel of the town and the people who have come in to visit us while we’ve been building have been nothing short of amazing.”

Captain Mike is also spending time in West Hartford and at the other locations, but at heart he’s still a lobsterman and dreams about being back out on the water. 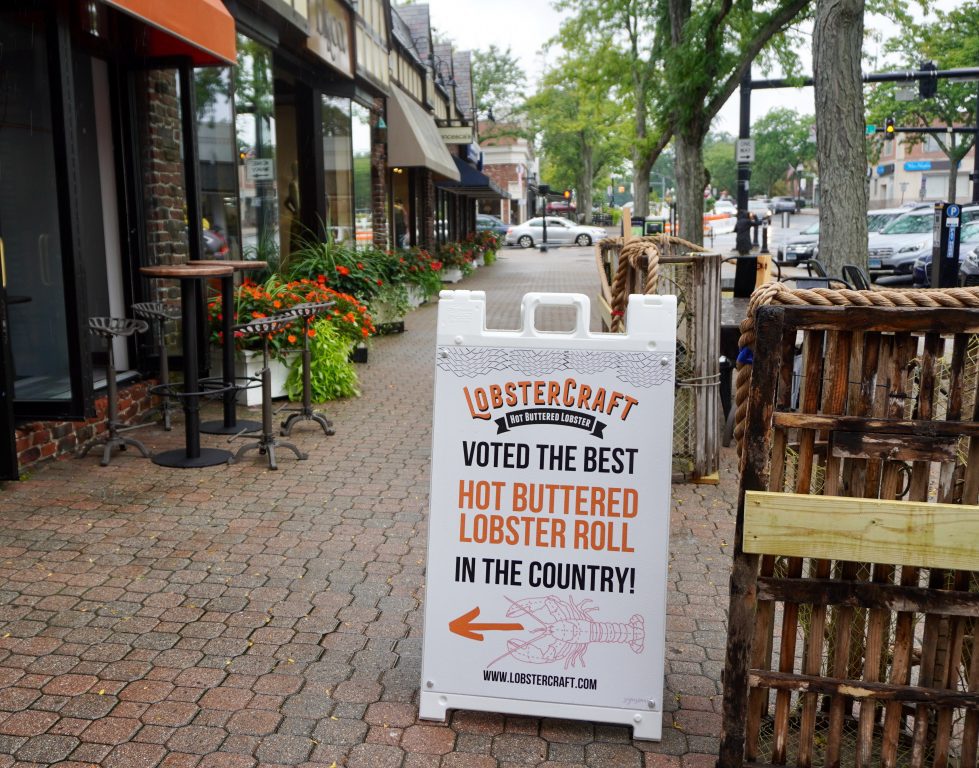 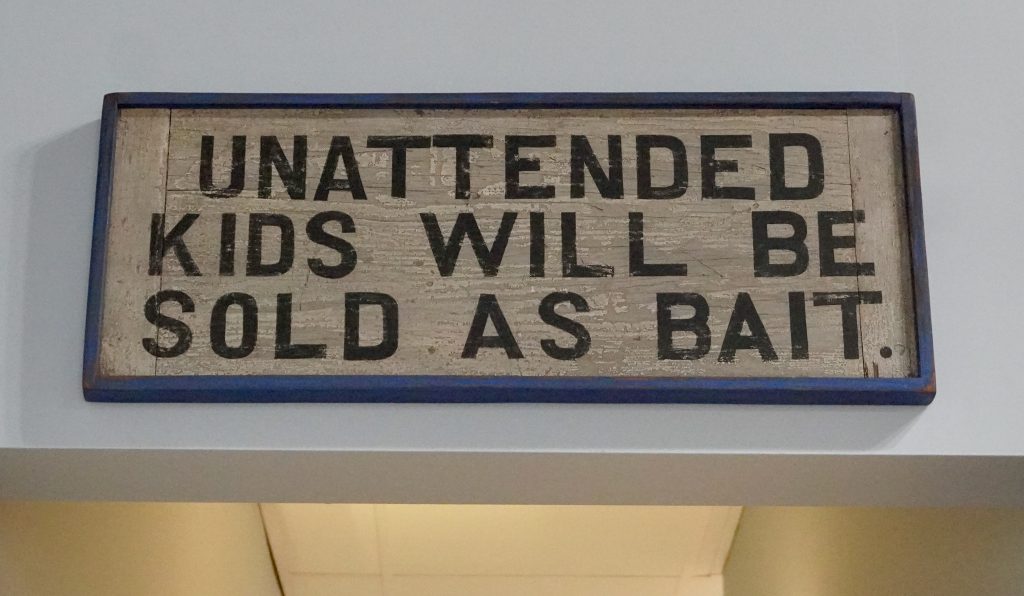 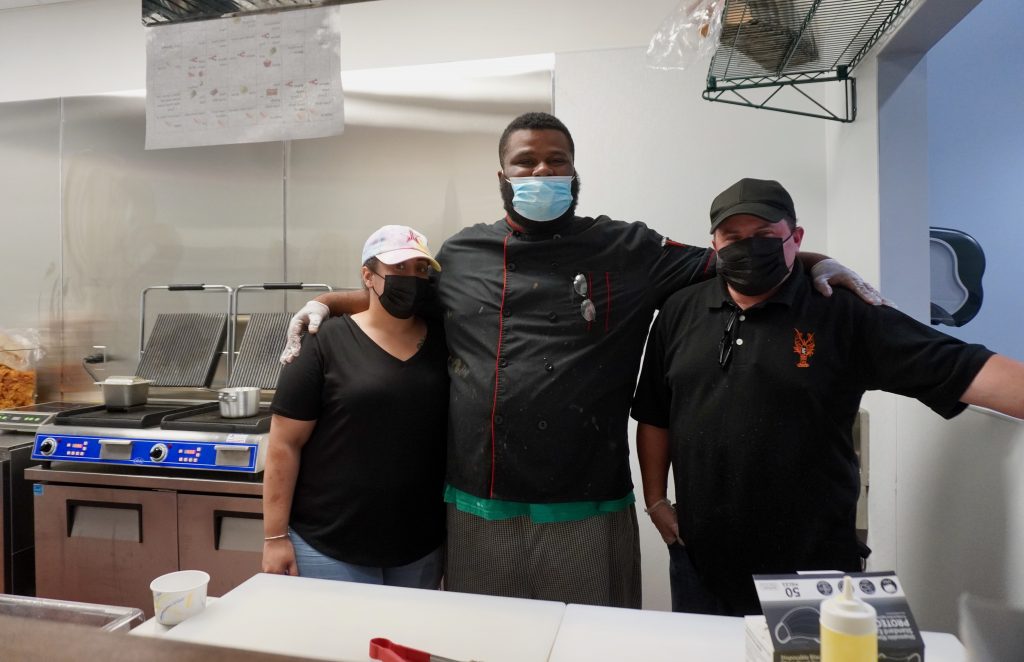