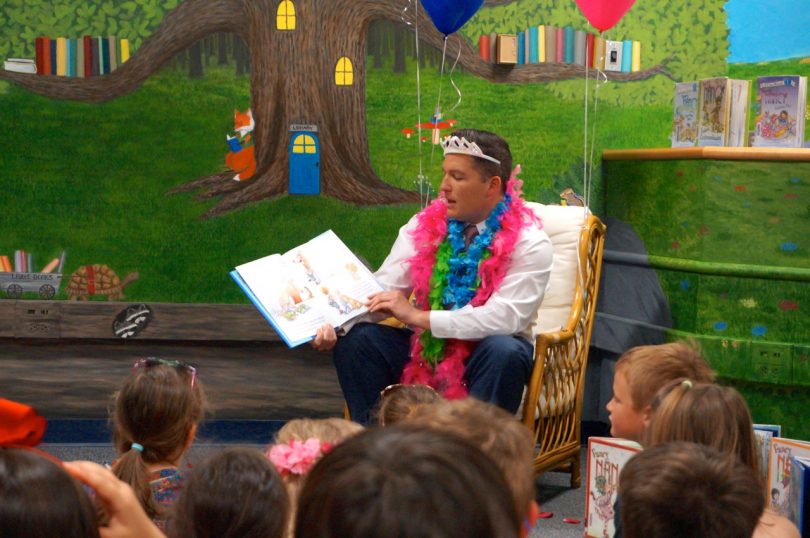 West Hartford’s Braeburn Elementary School proudly showed off the beautiful new reading corner in the library to students and a group of celebrity readers during the annual ‘Fancy Nancy’ Day.

By Ronni Newton and Gillian Hixson

Braeburn students – boys as well as girls – clad in glittery tiaras, boas, tutus, suits, and other “fancy” attire, streamed into the school’s library on Thursday to visit with a group of local celebrities who took turns reading from “Fancy Nancy” books in the brand new reading corner.

Library Media Specialist Claudine Lavoie said that “Fancy Nancy” Day has been a fixture at Braeburn for at least seven or eight years. It started when Jane O’Connor, the author of the best-selling “Fancy Nancy” series of children’s books, came out with a new book and Lavoie decided to introduce it as part of an event.

“We started inviting special guests,” she said, and in past years members of the fire and police departments have attended as special guest readers of Fancy Nancy books. “Even if I forgot about it the staff wouldn’t allow it,” she said.

This year, Lavoie invited some guest readers, like State Sen. Beth Bye and State Rep. Derek Slap, who were particularly supportive of the school libraries during the budget season.

The reading portion of the day is only for students in grades K-2, but Lavoie said that most of the older students and staff still dress up.

“For those students who may be struggling with their identity, this is day when they can do it – put on a tutu or a tie” and feel comfortable, Lavoie said.

The excitement about Fancy Nancy Day was augmented by its location – in the brand new reading corner of Braeburn’s library. Thursday was also the grand opening for the space which has been closed off for the past year.

Former Braeburn parent Jill Gavalis took a white wall and transformed it into an enchanted forest – a mural filled with children’s book characters and other whimsical creatures. No corner was left untouched, and even the columns were painted with characters.

There’s even a portrait of Justice, Perlstein’s 11-year-old mixed breed and a frequent Braeburn visitor, on one of the columns.

“I came up with the sketches after Claudine [Lavoie] suggested an enchanted forest,” Gavalis said. She estimated it took her 350 hours to paint, and the former music teacher said that although she had sketches, the painting was all done freehand.

One of her favorite vignettes in the mural, Gavalis said, is of the three bears. “They’re gender neutral,” she said of the large, medium, and small bears who are shown sitting on a blanket. The small bear is wearing a blue Braeburn t-shirt, but none are clearly male or female so that students from all kinds of families can relate to the scene.

“It was a labor of love. I love this school. It’s so fulfilling to me,” Gavalis said of the mural and her other project for the library. She did all the work as a volunteer – as was the case when she built the puppet theater and “reading porch” which also grace Braeburn’s library.

Gavalis said that when she built the puppet theater and porch she enlisted the help of her father, who has a wood shop, but she did all of the mural painting herself. For all of the projects, she worked closely with Plant Services Director Bob Palmer, she said, to ensure that everything was done safely and to code.

“Whenever I walk into a West Hartford Public School and go to an event like this I think this town is just amazing,” Bye said after finishing reading to Marta Weidel’s first grade class.

Bye said she loved that everyone was in character – including the staff – and that it really encourages the kids to read. “It’s the little things they do that matter.”

Before he started reading, Slap asked the young students if they had any good ideas that he could help turn into laws at the state capitol.

“No littering,” said one girl. “No being fresh, saying ‘shut up’ or ‘stupid,'” suggested another student. Slap told the students that those were some very good ideas.

Hanrahan was appearing as a celebrity guest reader at Braeburn’s Fancy Nancy Day for the second year in a row, though he admitted he had never heard of Fancy Nancy before his invitation to last year’s event.

One student in Silvia Lopes’ first grade class helped choose a tiara and some boas to “fancy” up the shirt and tie combination that Hanrahan was wearing for his regular role as a TV meteorologist.

“It is awesome to see all the kids get excited about reading,” Hanrahan said. He said he tries to attend events like this one at as many schools as possible, in West Hartford as well as throughout the region.

Hanrahan told the students that he knew he wanted to be a meteorologist – that’s a “fancy word for weatherman,” he said – since he was three or four years old, and enjoys these opportunities to read books and talk about weather.

The kids visibly fed off his passion and excitement, asking, “What’s the weather on Saturday going to be?”

“What about June 2nd (the birthday of a particularly spunky and forthcoming girl)?”

Hanrahan said that Saturday will be sunny but cooler, and as for the important dates in June, he said that “sunny and warm” would be likely. 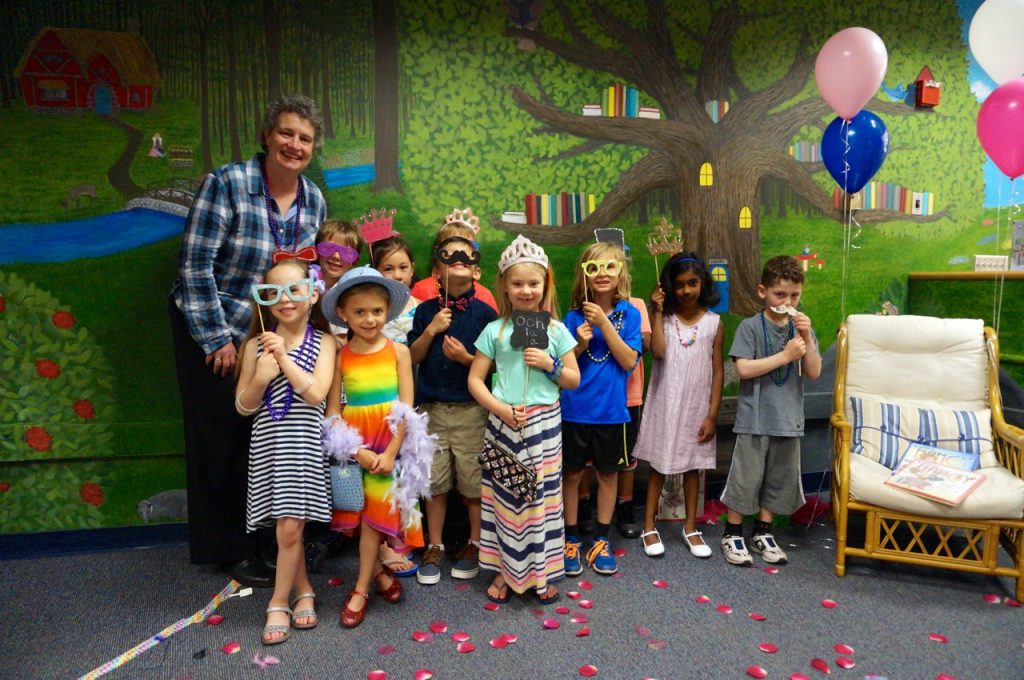 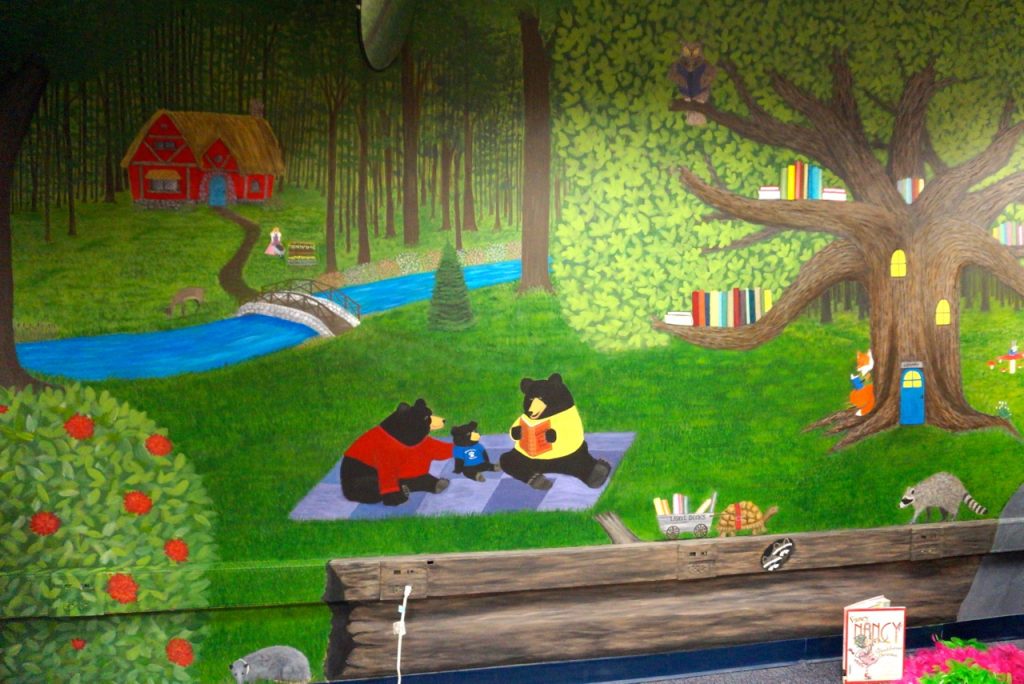 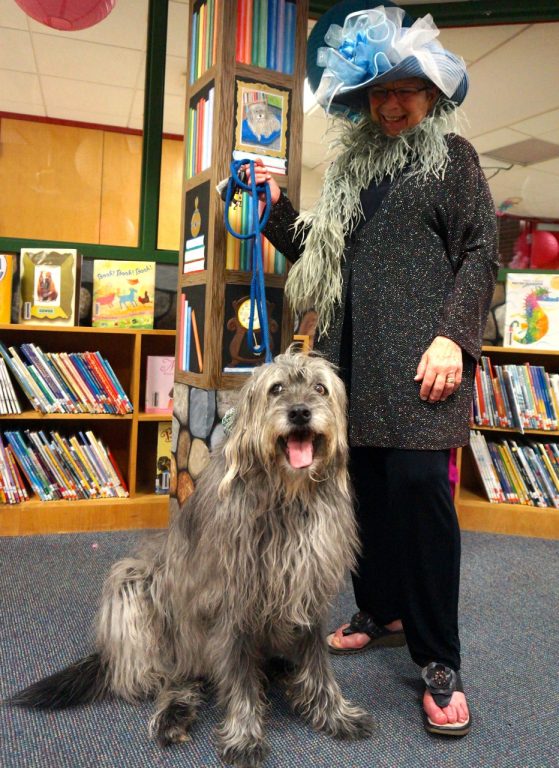 ‘Reading dog’ Justice and his owner Marla Perlstein pose in front of a portrait of Justice that was painted by Jill Gavalis onto one of the library’s pillars. Photo credit: Ronni Newton 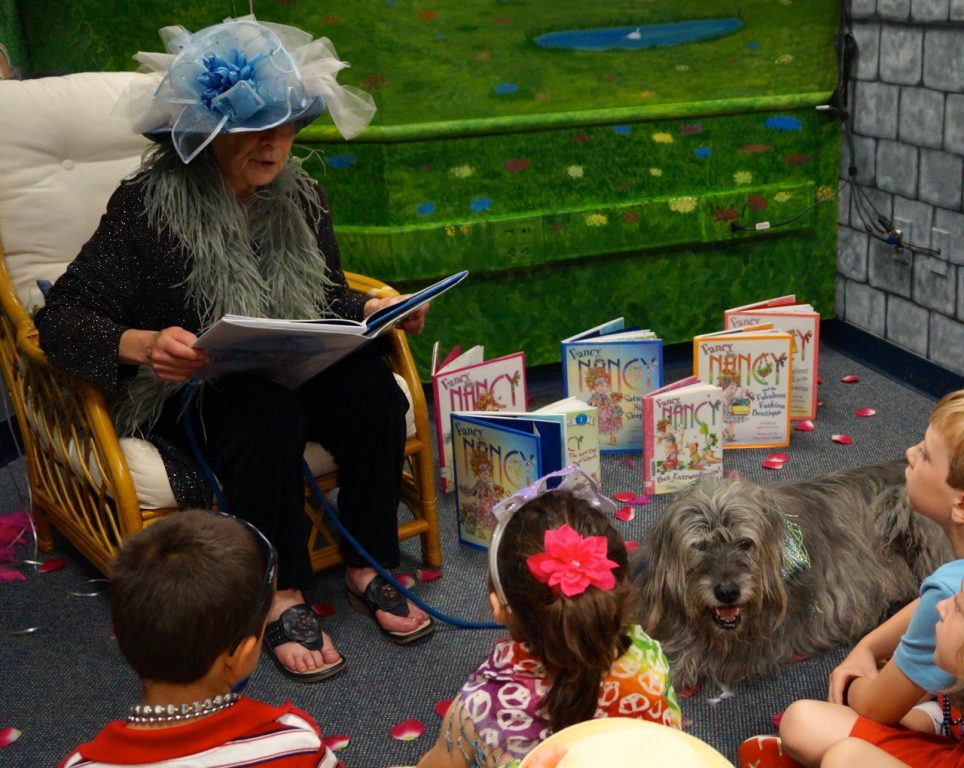 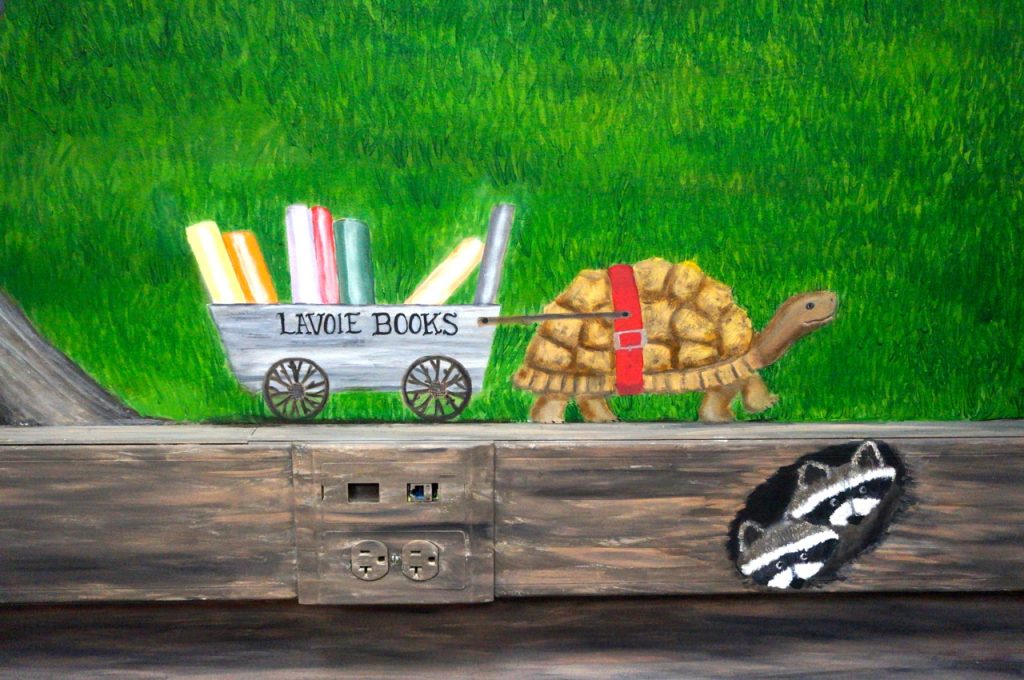 No corner or surface is left untouched in the enchanted forest mural painted by Jill Gavalis – even the electrical outlets are painted. Photo credit: Ronni Newton 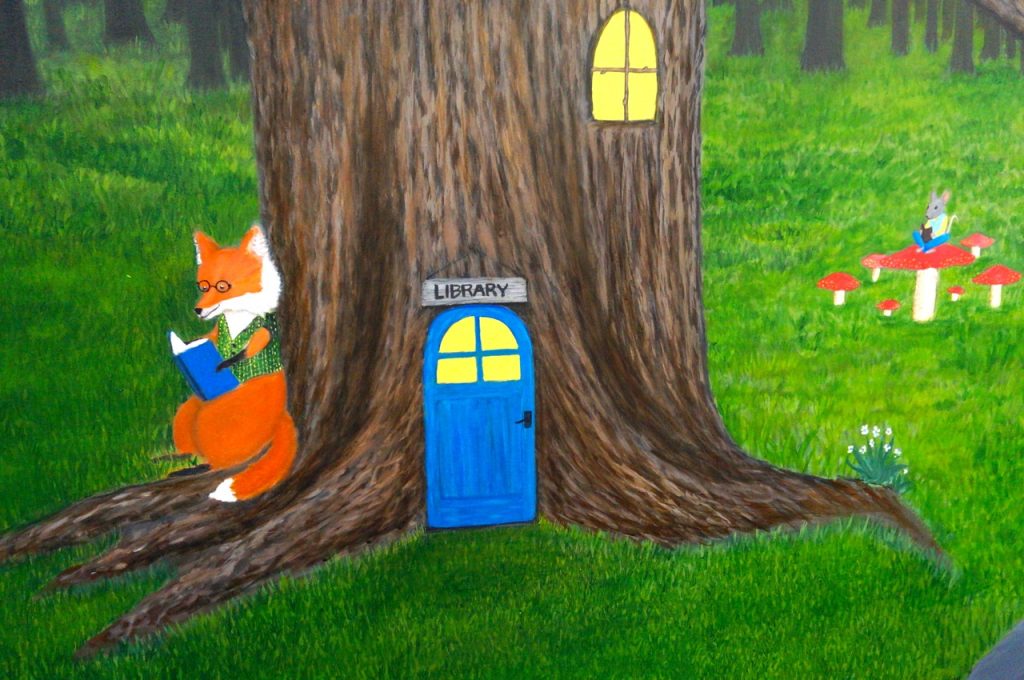 Close up of a section of the mural. Photo credit: Ronni Newton 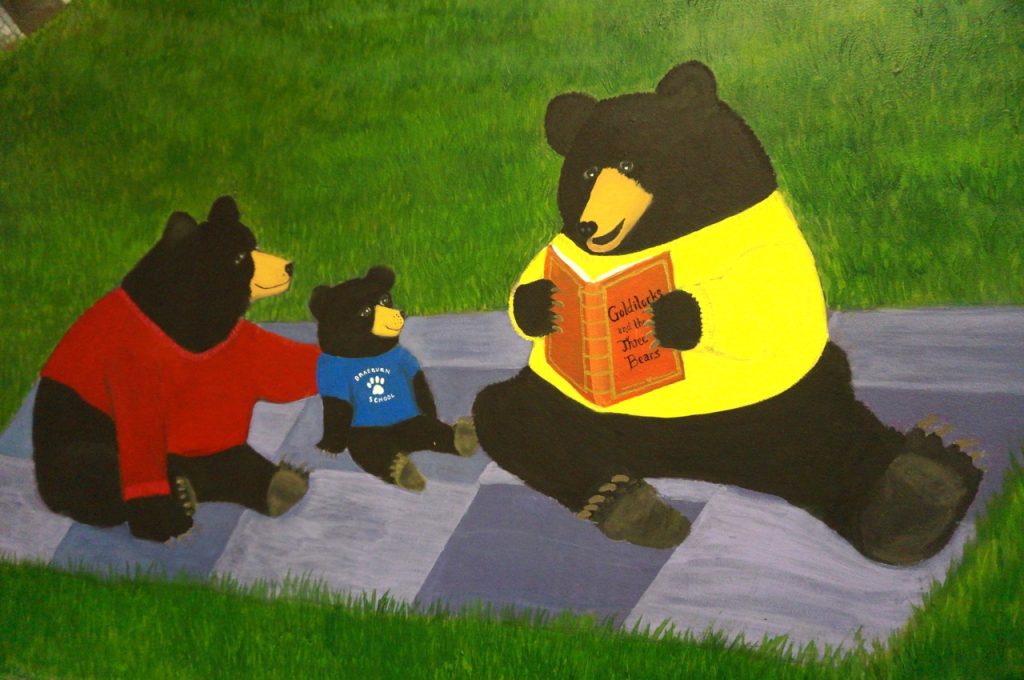 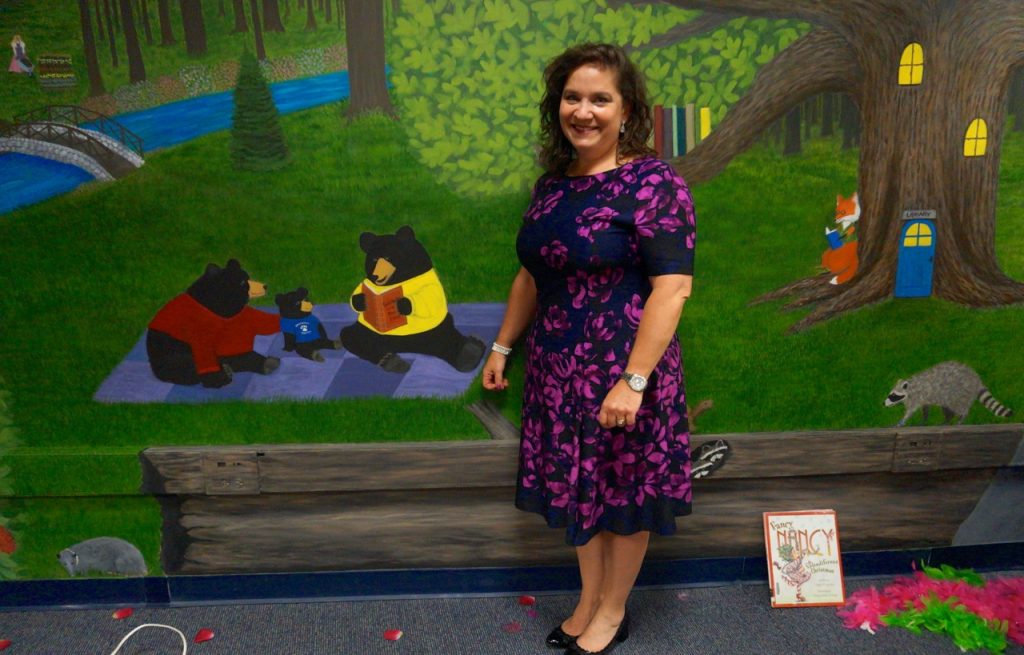 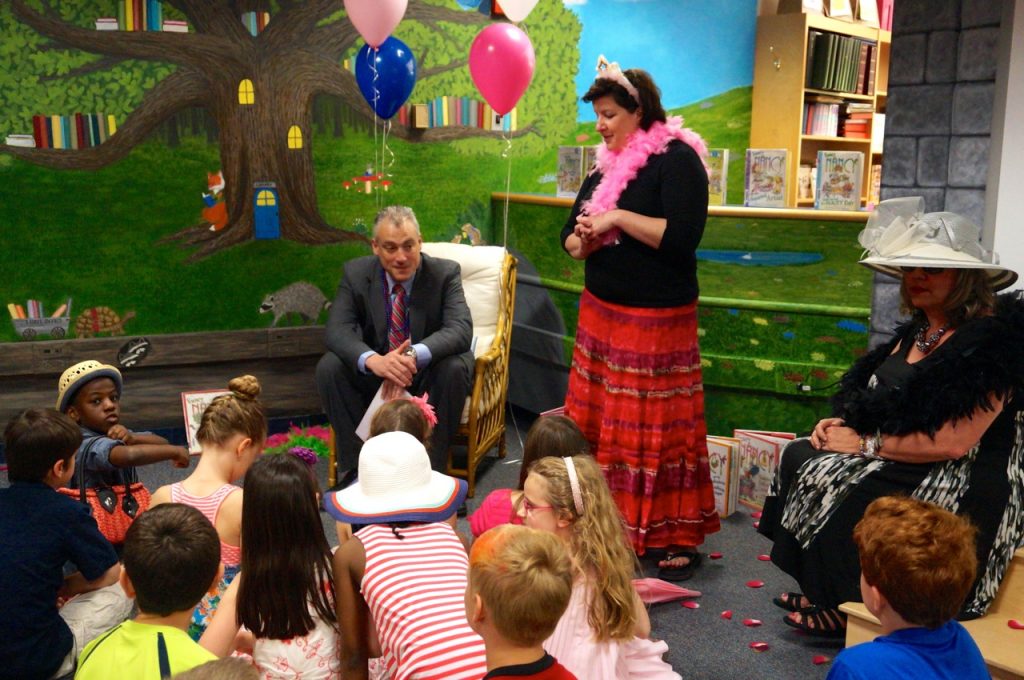 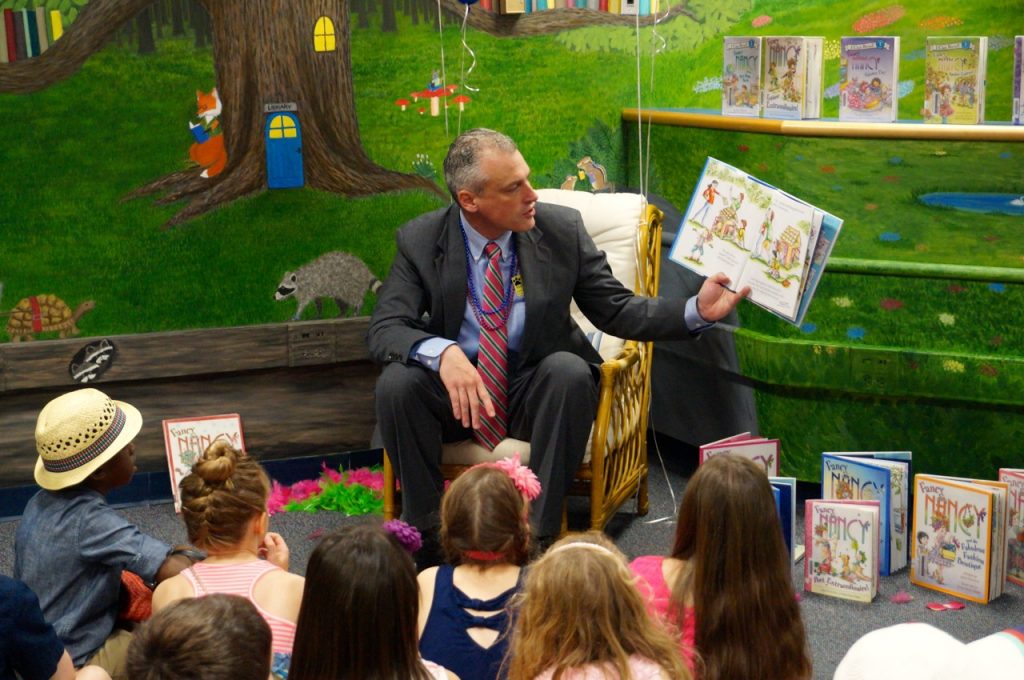 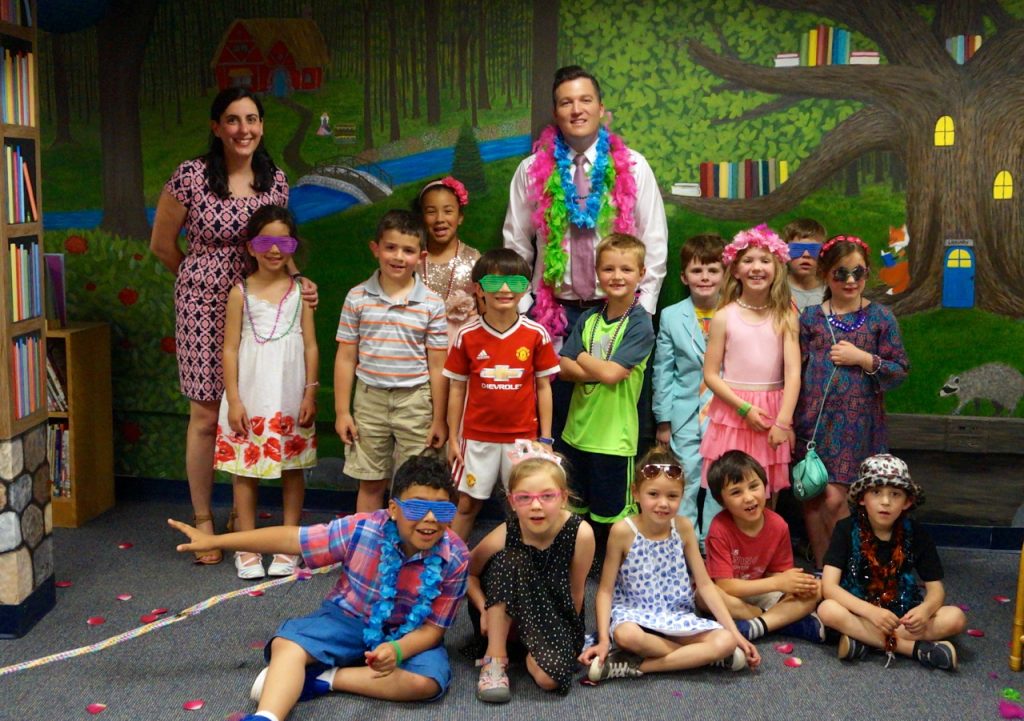 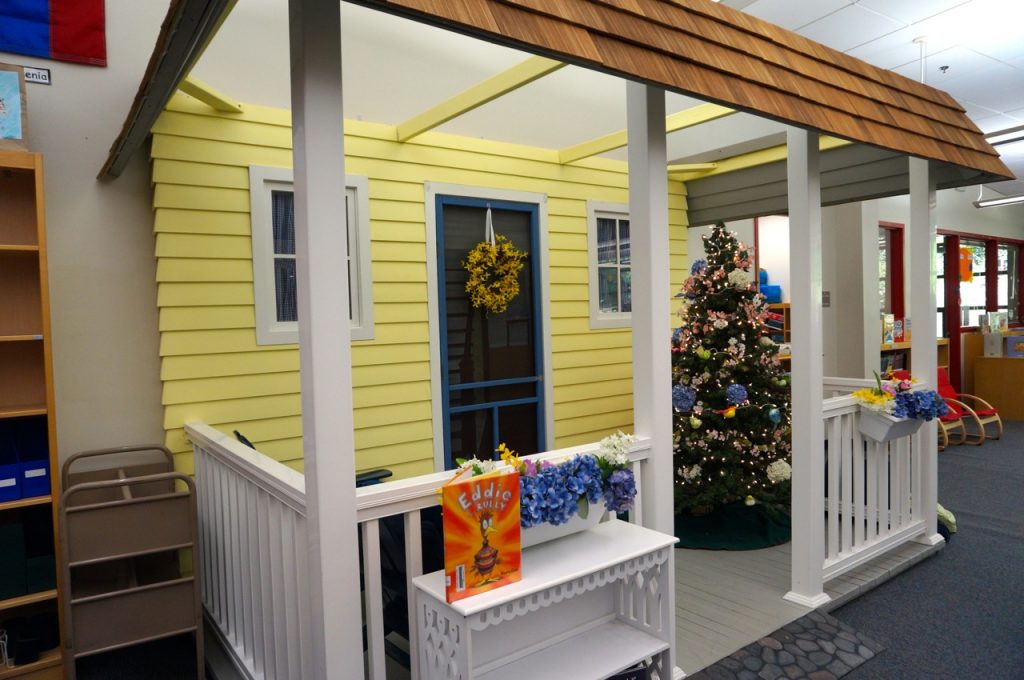 With the help of her dad, Jill Gavalis created this reading porch for the Braeburn library. Photo credit: Ronni Newton 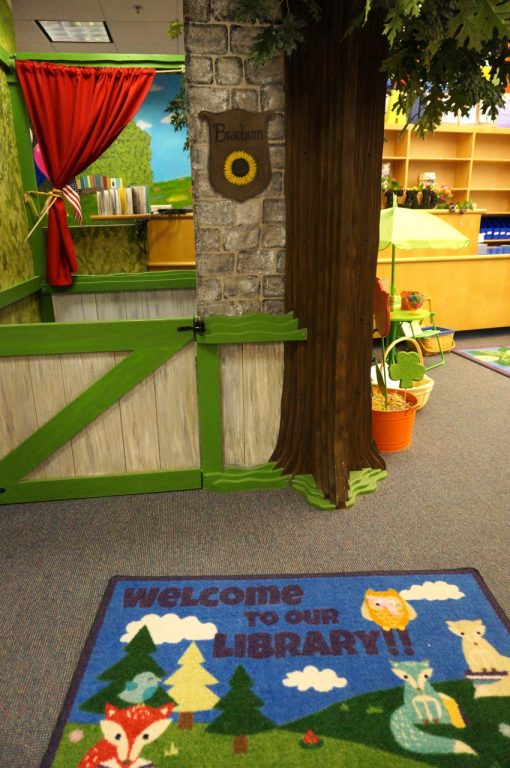