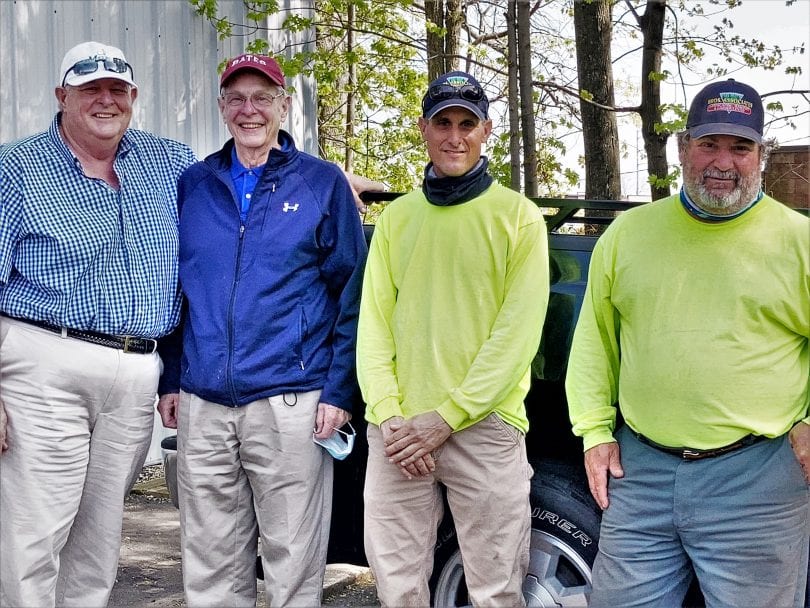 After three generations of ownership by one West Hartford family, Peterson Landscaping has transitioned to ownership by another local family.

David Peterson grew up playing in the sand piles of his grandfather’s greenhouse. He still remembers the pansies in the plant nursery, and how his grandfather sold Christmas trees and wreaths.

“I was like my grandfather’s shadow,” said Peterson, who has proudly carried on his grandfather’s legacy by running the family business, Peterson Landscaping Services.

Now, after more than 40 years of serving the West Hartford community, Peterson has passed the torch and merged Peterson Landscaping Services with Brothers Associates Landscaping.

“I’m very, very pleased with the transition to the brothers,” Peterson said. “That’s like a dream come true to me, that they can carry on. That’s what my family would want.”

Peterson’s Landscaping Services on Grassmere Avenue was a long-standing staple in the West Hartford community. It was started by Peterson’s grandfather, Gustave, who came to the United States from Sweden in 1899. Gustave first worked for his brother’s business, the greenhouses on Whiting Lane that are now part of Whiting Lane School, and also as a gardener to Elizabeth Park and the town’s wealthy.

In 1929, Gustave went off on his own and formed Peterson’s Flower Shop. It expanded and became Peterson Landscaping Services in 1962 when Gustave’s son, Peterson’s father, took over. Peterson and his brother worked summers.

When Peterson graduated from college in 1973, the business was once again passed down a generation, this time to him. He used his economics and business degree to grow Peterson Landscaping further and to adapt it to changing times.

“I actually think that I’ve held the reins longer than any of the others [in my family]. Although as long as my father was alive, he was still the boss,” Peterson said, laughing.

But a family business needs family to keep going, and with the next generations of Petersons taking different career paths, Peterson had to look elsewhere.

Half-brothers Gary Santos and Eddie Salvador of Brothers Associates Landscaping were the obvious choice. Peterson said that because they’re family friends of 40 years and great landscapers, Santos and Salvador were the best fit.

“My wife and David’s wife, they know each other and we hang out and go out to dinner,” Salvador said.

The brothers were happy to take over Peterson’s customer base and staff, as they’ve looked up to the work Peterson and his father did ever since they met at Connecticut Groundskeeper Association meetings.

“We hold the same standards that [David’s] father and the generations before him did,” Santos said.

After Peterson’s customers saw that the Brothers Associates’ work upholds Peterson’s quality, Salvador said they were pleased with the shift.

“We haven’t had any resistance at all. Everything’s been pretty smooth,” he said.

The transition took place at the start of the year. But even with the business now under Santos and Salvador, Peterson isn’t slowing down in his retirement. He’s on the Dean’s Advisory Board at the College of Agriculture, Health and Natural Resources at the University of Connecticut. He’s also Connecticut’s representative to the National Council for Agricultural Research, Extension, and Teaching.

Peterson said he can now comfortably focus on these obligations. He knows Peterson Landscaping Services’ customer base and help will be in good hands with Santos and Salvador.

“It’s been a blessing. [My father] would be so happy that these two guys were willing to accept the legacy that he left in his lifetime,” Peterson said.

Brothers Associates Landscaping is located at 2281 Albany Ave., West Hartford and can be reached at 860-232-9794. Visit their website for more information.