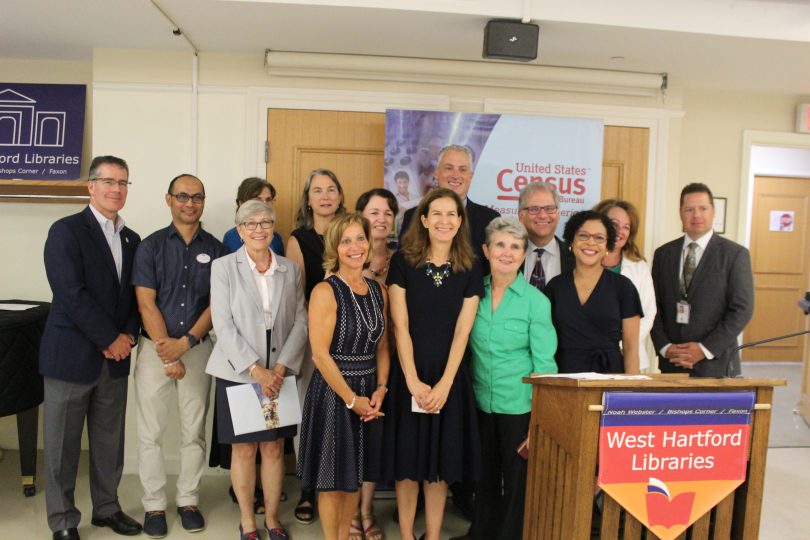 West Hartford officials joined Lt. Gov. Susan Bysiewicz Tuesday at the public library to launch an outreach effort to ensure West Hartford’s and the state’s populations are counted in the 2020 census. 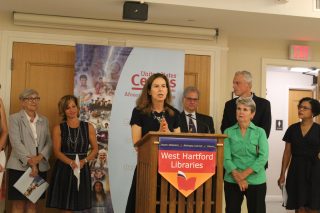 Bysiewicz and Mayor Shari Cantor announced the kickoff of the West Hartford Complete Count Committee for highlighted the importance of a complete count for the state.

The town’s complete count committee is an advisory panel of community leaders who represent diverse populations from across the town in an effort to reach all populations and demographics.

At issue, according to Bysiewicz and Cantor, is billions of dollars of revenue that flow into the state from the federal government based on census data.

“It is extremely important to every community to make sure that every person is counted,” Mayor Shari Cantor said.

Cantor noted that 70 different languages are spoken in West Hartford homes, and about 22 percent of the students in West Hartford speak a language at home other than English. Those statistics, according to Cantor, make the complete count committee particularly important to ensure all residents are counted in the census.

“We are going the extra mile to reach each and everyone in our town so they can be counted,” she said.  “Today is the first step in bringing awareness to this important national event.”

Bysiewicz said West Hartford was her 27th stop in the state to ensure every municipality creates a complete count committee. She and Gov. Ned Lamont launched the Connecticut Complete Count Committee initiative in February with the goal to count every individual in the state for the census. Bysiewicz said dozens of towns and cities in the state have joined the effort by forming their own local complete count committees, which reflect the municipalities’ respective diverse populations.

“[T]his is a critical effort for Connecticut because nearly $11 billion came to our state last year based on our census count,” she said, including funds for Medicare, SNAP, Head Start, the federal school lunch program, the community development block grant monies, energy assistance, road and construction programs, among others.

Bysiewicz also highlighted another reason why an accurate count is so important.

“We’re a donor state,” she said. “We give the most federal dollars and … I think we’re No. 48 among all the states in terms of what we get back versus what we give. So we really need to get this count right.”

Bysiewicz cited three challenges to getting an accurate count. The first, Bysiewicz said, is the “digital divide” – not everyone has access to the internet in their home, hence why the kickoff was in the public library.

This is the first census, Bysiewicz said, in which questions can be answered online and over the phone, in addition to mailing in forms.

“If you don’t do any of those things, call, fill out forms online, or by mail, an enumerator will be knocking on your door next May,” she said.

The second issue is mid-size towns and cities like West Hartford, which are considered hard-to-count areas because of the numerous multi-family housing units and apartments.

Finally, Bysiewicz said the controversy over the citizenship question, even though the Supreme Court ruled it couldn’t be included on the census.

“There’s a lot of misinformation about that,” she said. “There’s a lot of concern about it in our immigrant communities. … We need our trusted partners to get the message out that the census is safe, that none of the information that is collected on it can be used by federal law enforcement, and Gov. Lamont and I will make sure that local and state law enforcement agencies will not use it, either.”

State Rep. Tammy Exum also stressed the importance of the census and urged residents who do not have access to the internet in their homes to utilize the library.

“The library is such a wonderful resource,” she said. “We know it is a trusted place. There is a dedicated kiosk to fill out the census form. If you need assistance in filling out the form, this is the place to come.”

Exum noted not only the economic impact of the census, but also how it affects districting for the House of Representatives.

Slap turned the discussion to President Donald Trump, his administration and how the census is more than just about dollars and cents.

“It’s a fascinating time, because on the one hand we have the census that is run by the federal government and the mission is to count everybody, because we believe everybody counts,” Slap said. “At the same time we have the president right now – yes I’m going to go there – who is making it harder to ensure that everybody is counted. The administration is striking fear in immigrants by conducting raids across the country. His use of rhetoric in demonizing immigrants and even the administration talking about reimagining the message by the Statue of Liberty.

U.S. Census Bureau media strategist Keith Goralski said there are numerous, mostly temporary jobs that the bureau is looking to fill. Anyone interested in employment, or in learning more about the census should visit the census site, Goralski said.