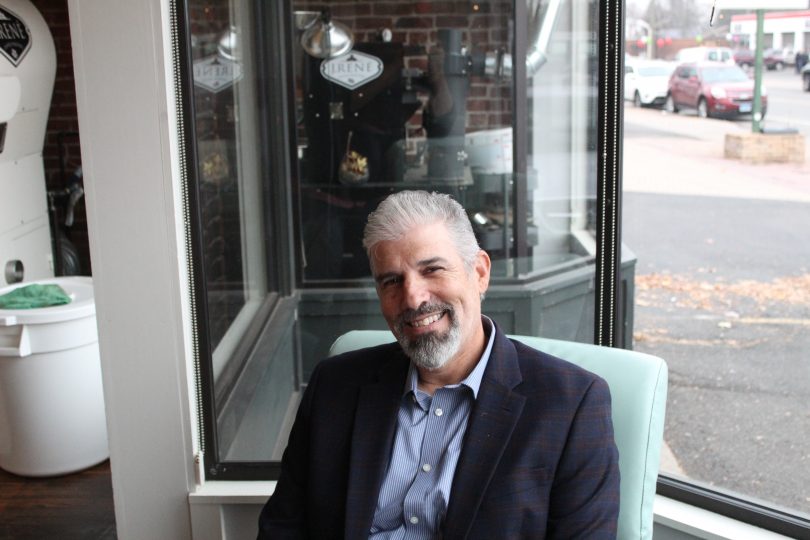 Matthew Warshauer, a history professor at Central Connecticut State University, is perhaps best known for his Halloween display on North Main Street in West Hartford. He is currently working on a book on the impact of 9/11 on the United States. Photo credit: Ted Glanzer

West Hartford resident and history buff Matt Warshauer, known to many residents for the elaborate Halloween scenes he creates in front of his North Main Street home, discusses how he chose the path to academia.

The sliding doors moment for West Hartford resident and Central Connecticut State University history professor Matthew Warshauer came while he was in graduate school at St. Louis University in 1997.

He either could pursue a job in academia, or he could have taught martial arts and self-defense, as well as worked some in real estate.

“I prepared an entire career in that, if things had not gone the way they had,” Warshauer said in a recent interview. “I had an LLC set up, I had jobs set up if I hadn’t gotten a job in academia, and I was going to go into house flipping. I’m a handy guy. I can build just about anything.

“I never went into academia to become a professor. I went because of intellectual curiosity.”

Warshauer never had to fall back on his backup plan. The one-year teaching position at CCSU, recommended by legendary CCSU history professor Norton Mezvinsky in the summer of 1997, was a tenure-track position that got his foot in the door, Warshauer said.

“I jumped at the opportunity.”

Not that it’s something that anyone could have predicted when he was growing up, which was, by his admission, “all over the place.”

He was born in Houston and he and his family bounced all over the U.S., from New Jersey to Pennsylvania to Illinois to California, and back to Illinois before finally settling in Westport.

Staples High was his third high school in four years and, by then, he wasn’t much of a student.

“I showed up in combat boots and on a motorcycle,” he said. “I was the first punk rock kid they’d ever seen. It was rough.”

(About five years ago, Warshauer was talking to a group of educators, and a woman asked him to do some professional development for Staples’ teachers. “I started laughing,” he said. “She asked, ‘What’s so funny?’ I said,‘I graduated from Staples and when I graduated, no one was planning on inviting me back.’”)

After graduating from Staples in 1984, Warshauer’s parents “forced” him to go to Western Connecticut State University to meet one-on-one with a faculty adviser.

“So I went back. I was still living at my parents, working at a deli, slicing meat and dishing out potato salad.”

But the deal was that he had to go to college, at least for a little bit. So Warshauer took some courses at Norwalk Community College. Three semesters there, including two marketing and one law class, led Warshauer to change his mind about academia.

“I found it more engaging and more interesting,” he said. “I found high school a waste of time. I was bored with it.”

He later transferred to Central as a marketing major, where he met two professors that changed his life: professor of English Barry Leeds and Mezvinsky, who is now 86.

That’s where his fiery passion for history was stoked.

“The thing that interests me the most about American society is what I call the American Paradox,” Warshauer said. “How we can espouse these world-changing ideals and yet often not live up to them in our most basic practices? That’s where America is right now in many ways.

“The concept of America is very real and has in fact changed the world. I think we often forget about it and take it for granted. We changed the world in the last 243 years – on the whole for the better. But always we have more work to do when we forget those ideals. That’s when we run into trouble.”

Which is where Warshauer is in his work these days. His first two books were on Andrew Jackson, including “Andrew Jackson and the Politics of Martial Law: Nationalism, Civil Liberties, and Partisanship,” a 2006 work that examines the first time martial law was declared in the United States. The New Yorker magazine did a lengthy review of the book and it was well received.

“It’s something most legal experts know nothing about,” Warshauer said. “It changed the definition of martial law in the United States.”

The second, shorter book, “Andrew Jackson in Context,” was published in 2009.

In 2011, the sesquicentennial of the Civil War, Warshauer helped put together a 150th anniversary commemoration.

“We did as much or more than any other state,” save for Virginia, which had $2 million for historical tourism to invest, Warshauer said.

“Everyone assumes Connecticut is this great abolitionist state, and I proved that wasn’t the case,” Warshauer said, noting there was plenty of anti-war dissent and people were divided over the cause.

He also has edited a book on Connecticut and the Civil War written by then-graduate students.

“That is the catalyst for America’s biggest change in going in the wrong direction,” he said.

Warshauer said he got the idea of looking into the subject when he saw a banner outside the Southington Library that said “9/11, 10th anniversary, we will never forget.”

“I’m talking to a crowd of people about the memory and meaning of the Civil War,” he said. “I looked at the banner and said, Oh yeah? Think you’re going to remember that forever?”

Three years ago he began teaching a course on 9/11 at Central, which is extremely popular.

“9/11 fits within the American paradox,” he said. “What we do in the name of freedom. My big argument in this book is a 9/11 Generation exists, whom we call post-millennial and Generation Z. It’s the post-9/11 generation. There are those who remember it, who are old enough to remember it, who were 10 or 12 years old. Those kids have a collective memory of exactly what happened on that day. But the younger kids, it’s not the same.

“9/11 is the most watched event in world history. An upwards of 2 billion people watched the second plane going into Tower 2 live. There was a collective gasp. It was involuntary. Then with the exhale came terrorism, war, fear, catastrophe. But that’s not the memory the younger kids have. Their memory is being pulled out of school, teachers freaking out, crying, announcements over the PA system, that happened all over the country. It is the singular, collective experience in world history.”

The people he meets now who were younger than 10 or so, he says he can tell them what they remember: that their parents came and picked them up at school with all of the attendant fear, anxiety and uncertainty. They’re not Millennials, Warshauer says. They are the 9/11 Generation.

“An entire world was shaped by this event and, more importantly, the U.S. reaction to it,” Warshauer said. “It’s when soccer moms became security moms. Parents, society, culture-infused chaos,instability and fear that is just overriding everything. What you have goes with all of this. You have the economic collapse, political chaos, inability for government to solve problems, never-ending war comes in the aftermath of this event. That’s the world these kids have grown up in. You wonder why 2013, 2014, we start seeing a massive rise of ‘We need more councilors, serious psychological distress.’ This generation is filled with anxiety all because of this event. It is a defining moment for the U.S.”

Warshauer says he has the research to back it up, such as small children who view something again and again who don’t have the spatial capacity to know they are watching a rerun. They relive it over and over.

He also has research about long-term trauma and cortisol levels that backs up his thesis. Not that he is reaching a conclusion of doom and gloom, however.

“My point is it’s defining a generation,” he said. “What do we do in the aftermath. With 9/11, the Twin Towers fall across the road to the 21st century. The U.S. has a choice of going one way or another. The road we have taken is fundamentally the wrong road that calls into question the Declaration of Independence, calls into question the commitment to the Constitution. Calls into question our commitment to human rights and liberal democracy. Everything that’s gone on in the world right now. Europe is experiencing the largest refugee crisis since WWII. All of that is connected to the invasion of Iraq, which is connected to 9/11. And it didn’t need to happen. We did not need to go this way. The decision to go into Iraq was a choice. 9/11 says a lot about American society. My hope is this generation, they don’t know this history. I end the first chapter by saying we should remember. But that’s impossible. They can only learn. The obvious question is what should they be taught. I have hope for this generation.”

Pretty heavy stuff from the guy who is best known outside of academia for being the author of the Halloween House on North Main Street, which seems to have grown more elaborate and more political every year. In 2018 he built a wall scrawled with messages taking aim at the Trump administration. In years past he’s created an elaborate pirate ship and a crashed helicopter.

“For some people it is my legacy,” he said. “I’m OK with that. I find it to be super fun. I’m obviously poking fun. I’m engaging the absurd. Because things are so absurd. … What’s your choice? Stay home and cry? Pull out a gun and start shooting people? Which is where we’re going. … I get lots of hate mail and hate phone calls. OK, I can handle that. It’s my duty as a citizen to say what I want to say. But I’m not spewing hate. I’m not hurting anybody. I’m asking questions more than anything else. What’s kind of cool is it is a legacy of some kind. There’s kids who’ve grown up in town who remember it from a young age. This year a guy came by and said he grew up around the corner and he knew it was going to be October. He said, ‘I wanted to show my wife.’ That to me is so freaking cool.”