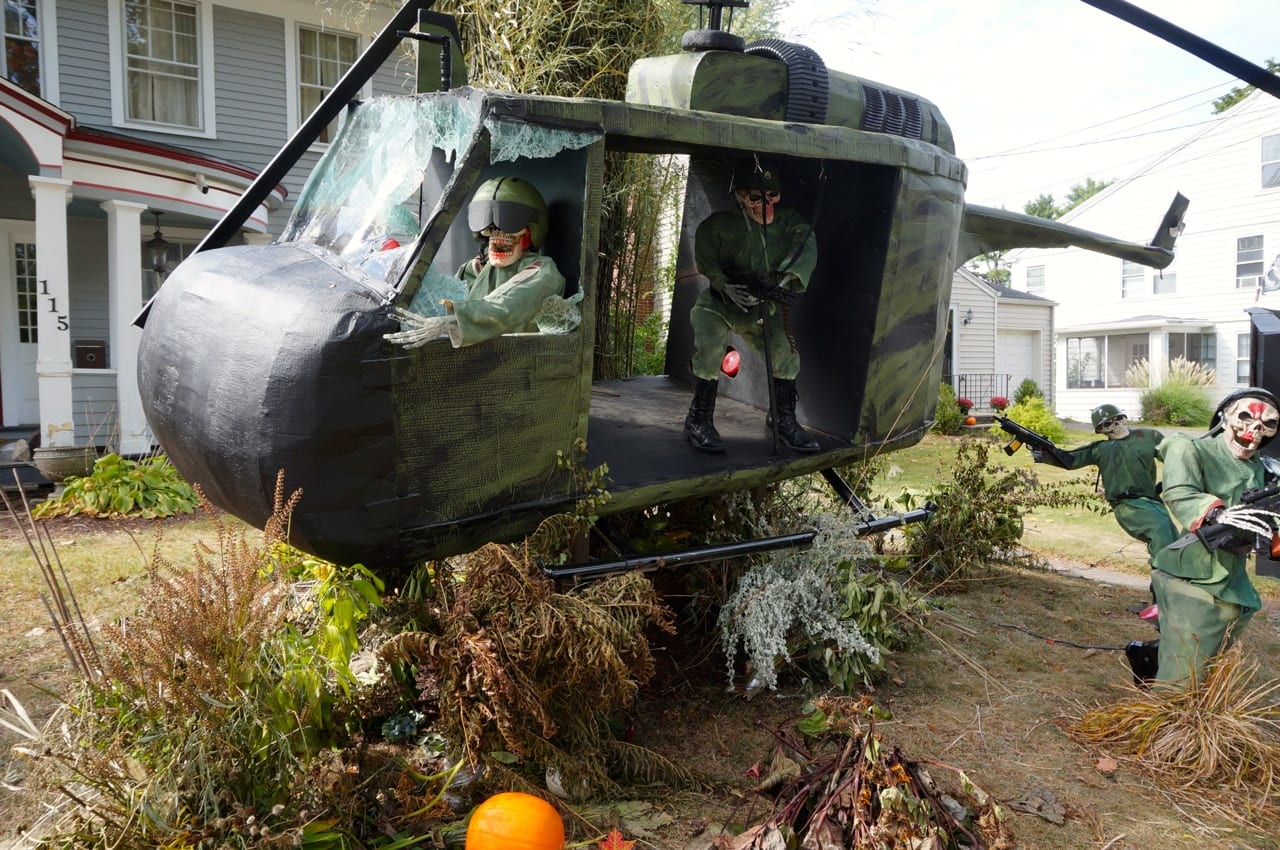 The annual Halloween scene on the front lawn of West Hartford resident Matt Warshauer’s home includes a historical message about the Vietnam War. 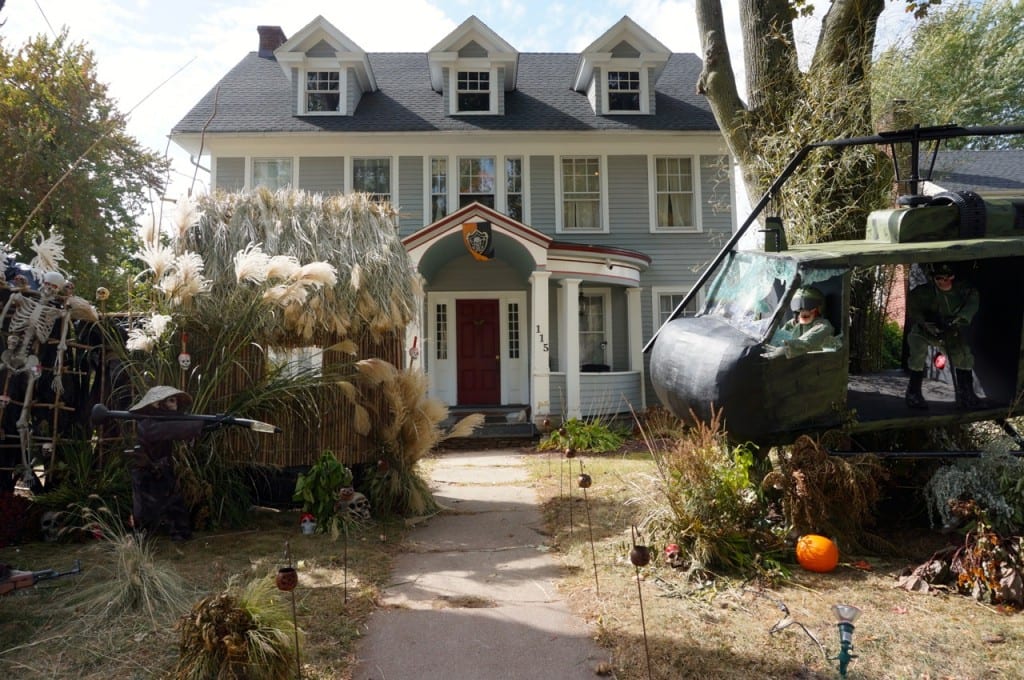 Motorists driving along North Main Street in West Hartford will probably do a double-take when they catch site of a downed Huey helicopter on the front lawn of a home just north of Fern Street, but what homeowner Matt Warshauer hopes they will do is stop and contemplate his annual Halloween display, which this year focuses on the Vietnam War and the issue of America’s treatment of its veterans.

“It’s not as ‘overtly’ political this year,” Warshauer said, but for nearly a year he has been thinking about this year’s theme and crafting his plans for the display in the context of the 50th anniversary of the United States’ involvement in Vietnam. Last year’s display, depicting the Fall of Rome complete with a replica of the Colosseum, made a much more obvious dig at the state of the American political system, he said.

Warshauer included his three daughters in the planning for this year. “We talked about how political we wanted to go, and decided on something a little more subliminal and thought-provoking.” His daughters – Emma (nearly 16 and a junior at Hall), Samantha (14, a freshman at Hall), and Jess (11, a sixth-grader at King Philip) are now all active participants in creating the display. “For this year they mainly did execution, but they helped me a lot,” Warshauer said.

The display has several major elements: a replica of a downed Huey helicopter – an aircraft Warshauer said is “the classic symbol of Vietnam,” the Vietnam Veteran’s Memorial, and a collection of bamboo huts. Sprinkled throughout are Halloween-esque “soldiers” dressed in camouflage, touting weapons and wearing Asian conical hats on their ghoulish skull heads. 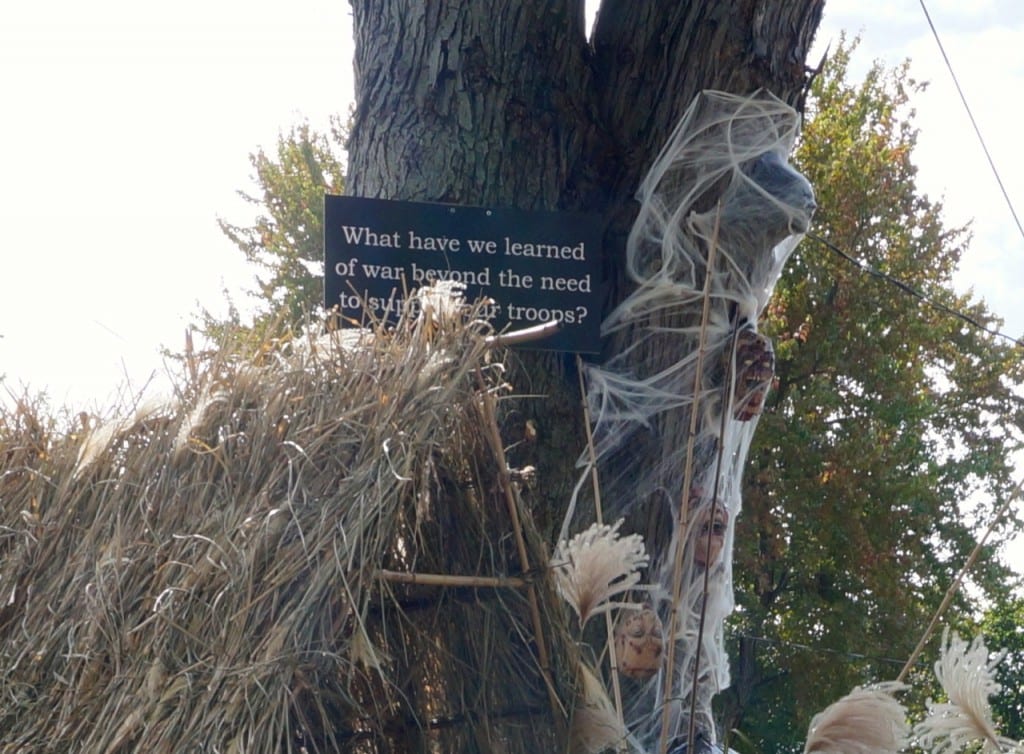 The major message of the display, Warshauer said, is written on a sign nailed to the large tree: “What have we learned of war beyond the need to support our troops?” It’s a question that Americans have failed to come to grips with, he said.

Soldiers went to Vietnam and served their country, but were not warmly welcomed when they returned home, he said. Then, with the Gulf and Iraq wars, it was all about “support our troops,” said Warshauer. But there are still major issues facing veterans including lack of funding for many of their needs. “What does supporting our veterans really mean?” he said.

“If I can call for more support, even with a trivial Halloween display” that’s at least doing something, said Warshauer, a history professor at Central Connecticut State University who has lived at 115 North Main St. in West Hartford for more than 15 years.

As for the building of this year’s display, including the helicopter, Warshauer said it was far less complicated than it appears.

“It’s built the same way I build everything – with a light-frame wooden structure, cardboard, and a lot of screws, a lot of caulk.” Cardboard is actually very durable when it’s painted on both sides, and can be cut and shaped just like wood, he said. When it’s painted thoroughly on both sides, and caulked, it can easily last a month even when it rains. The cardboard gets wet and soggy, but when it dries it’s just as strong as it was previously, he said.

Warshauer gets all of his cardboard from a local furniture warehouse, from “John the box guy” – a source he has cultivated over the years. He purchases tubes of caulk, screws, and washers. The wood is all scrap wood. “This year I bought some PVC pipe and a gallon of paint.” He figures that he spent about $100 for the entire display.

Warshauer said he wandered around Home Depot looking for something “cool” to turn into the Huey’s engine. A wall vent ($5) and piece of gutter ($6) did the trick.

The helicopter isn’t nearly as heavy as it looks either. Warshauer said it weighs only 50-60 pounds, and wasn’t very difficult to move from its staging area behind his house where he built most of it over Labor Day Weekend. He said one of his daughter’s friends was sure it was metal he had welded when it’s actually cardboard that he cut as he worked.

The toughest item to obtain this year was the cracked windshield. Warshauer said he finally found a junkyard in Newington that said they would call him when they accidentally broke a windshield while removing it from a car. They did, and he got the windshield at no cost.

Since Warshauer has been creating a display for year many of the items are reused, including the skeletal creatures which provide the human – or not-so-human – elements in the display. Their uniforms are karate outfits that have been used in past years, now dyed and spray-painted.

The bamboo huts are framed with wooden stilts he reuses and stores under a neighbor’s deck. The bamboo grows in his backyard. “As the bamboo dies, I cut it and made poles. I stored it on the side of my yard,” Warshauer said. He used twine to clove-hitch the poles together.

The roofs of the bamboo huts and the plantings are all ornamental grasses from Warshauer’s yard. His youngest daughter and four of her friends, working in teams, cut the plants and used clear packing tape to hold them together and form shapes and clusters.

Warshauer said that his wife, who gets a bit stressed and is not as excited about the displays as he is, especially when they are overtly political, was pleased with the use of the plantings. She came out and said, “Wow, that’s a clever way to use yard waste.”

The display was completely set up on Saturday, Sept. 26. Warshauer said he always stages it in advance and then takes off the Friday of the last weekend in September. “I try to put everything up as fast as I can. It’s kind of the Disney effect – you don’t want to see it in progress.”

It didn’t take long before the display began to create a buzz around town. Warshauer isn’t on Facebook, but friends and family told him about a post dedicated to his display that started with “What is it???” and garnered 60 comments. Most were positive, he said. “As for the comments about the guns being inappropriate for children, every single one of them was bought in the toy section.”

“For a long time I didn’t think what I was doing was public art, but then I came to the realization that it was,” Warshauer said. Making a statement through art, or a cartoon, will often make people contemplate the message rather than just shutting it out, he said.

“I want to provoke a reaction – not to tell you what to think but to help you realize what you think,” he said.

As a political historian, Warshauer realizes that in a lot of countries he would be “thrown into jail for something like this.”

One person commented on Facebook that the display was “disgusting.” “What I would love to know is why that person thought it was disgusting,” said Warshauer. “If it’s a political statement, I would love to discuss it,” he said.

“‘What have we learned about war?’ is not a Republican or Democratic issue, it’s an American issue,” he said.

The reference to “Apocalypse Now” made in one of the comments was very accurate, he said. “That’s what I was going for.” Warshauer said to listen for music featured in the movie – “Flight of the Valkyries” – to be playing outside 115 North Main quite soon. 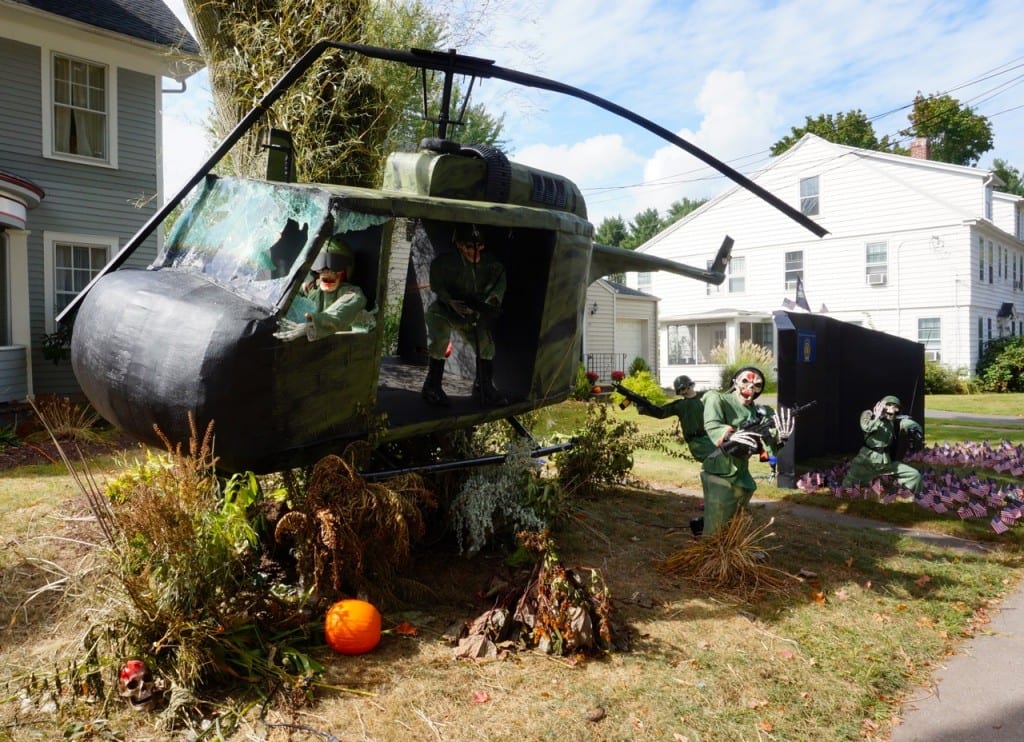 Matt Warshauer’s 2015 Halloween display at his North Main Street home in West Hartford includes a Huey helicopter replica. To the north is a replica of the Vietnam Veteran’s Memorial Photo credit: Ronni Newton 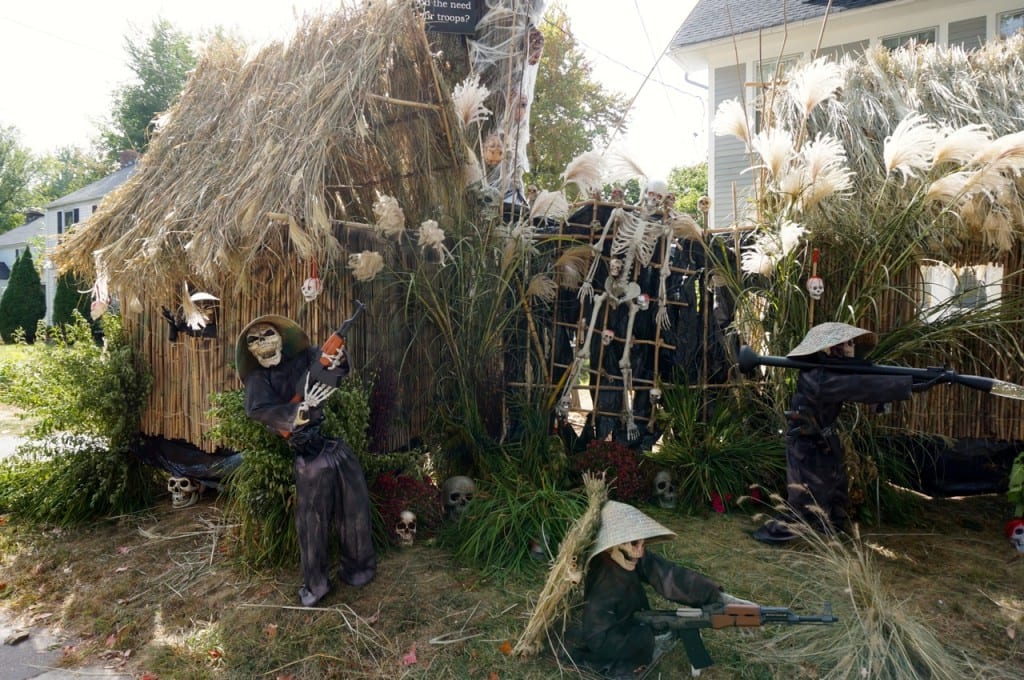 The huts are made of wooden stilts and bamboo cut from Warshauer’s backyard. Photo credit: Ronni Newton 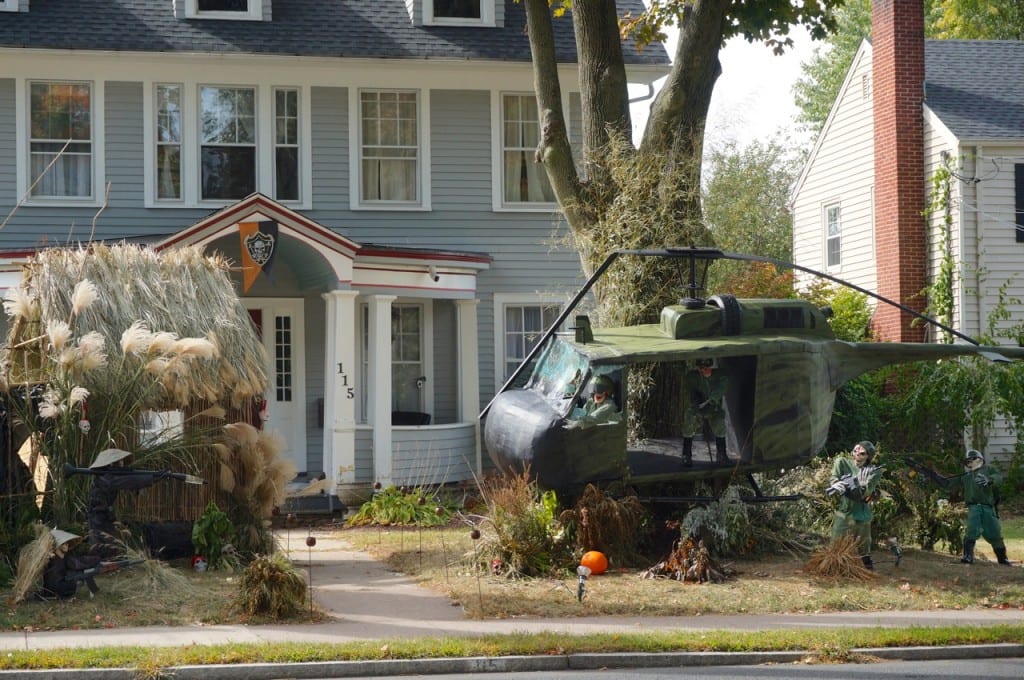 One side of Matt Warshauer’s home features a downed Huey helicopter while ghoulish soldiers surround bamboo huts on the other side. Photo credit: Ronni Newton 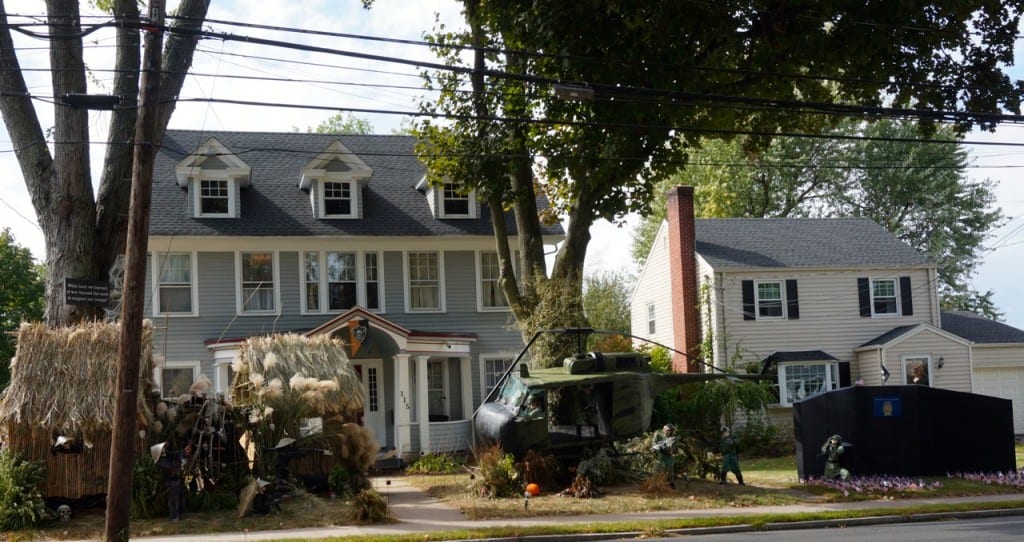 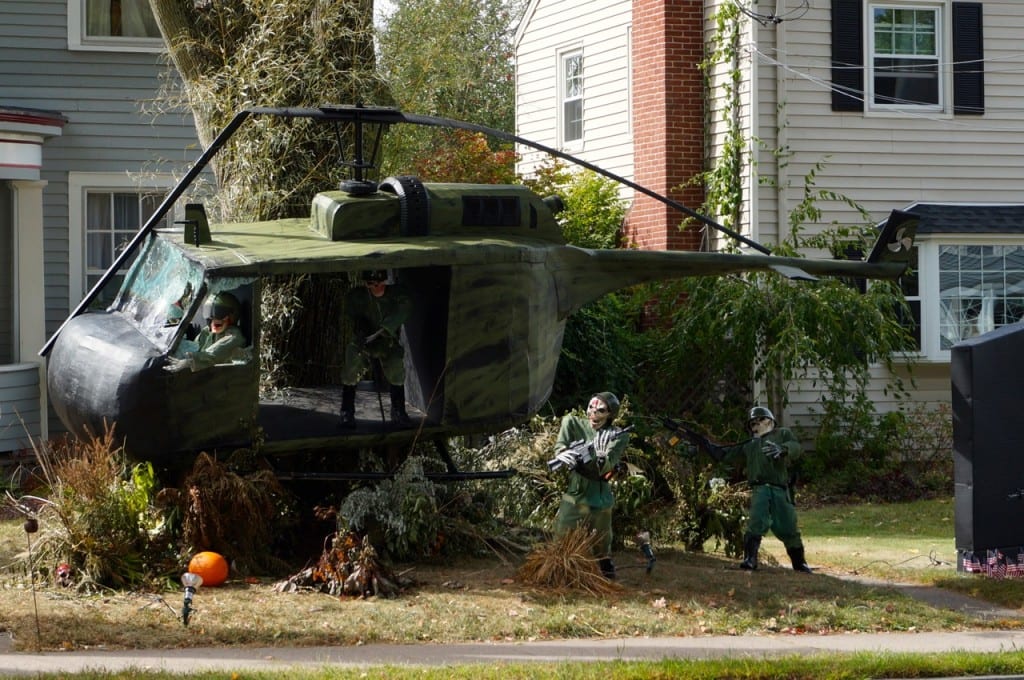 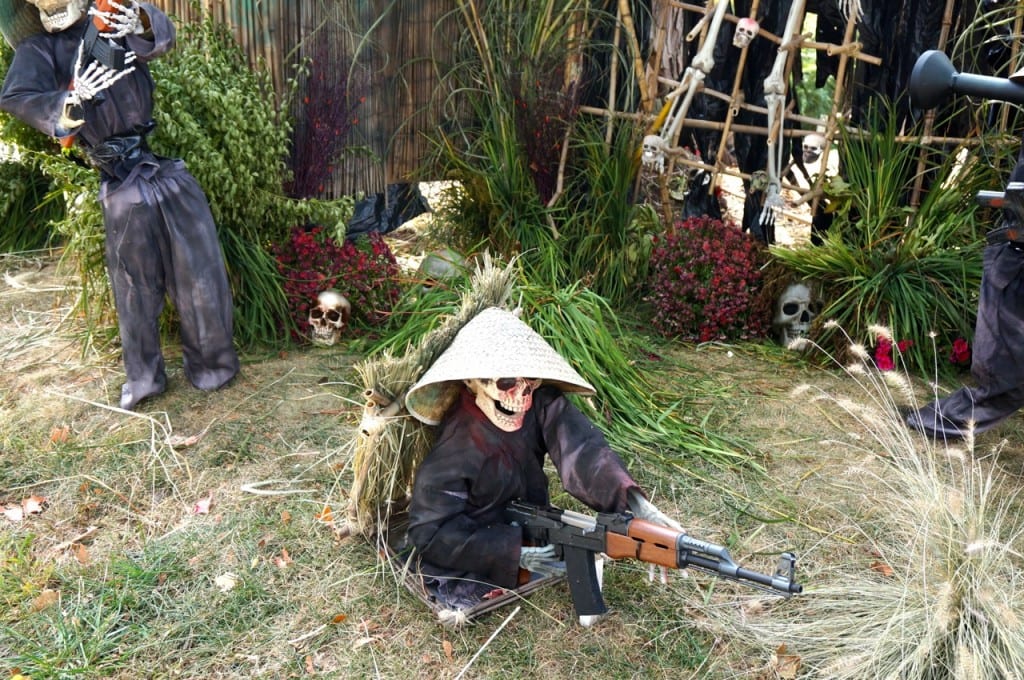 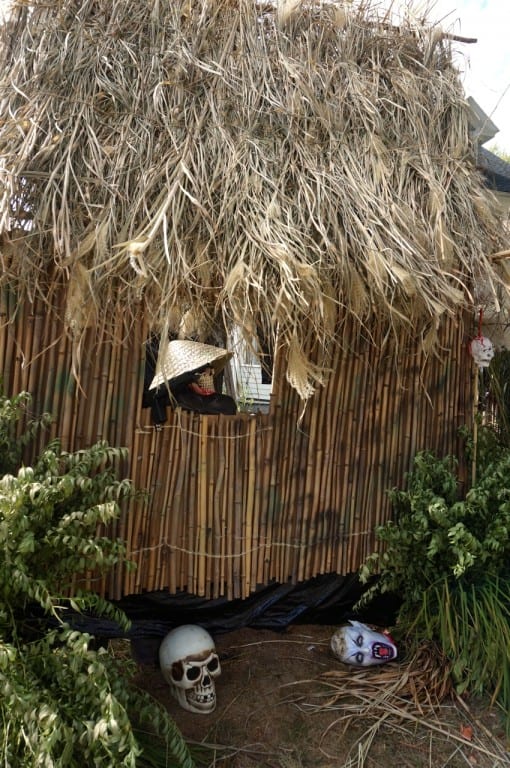 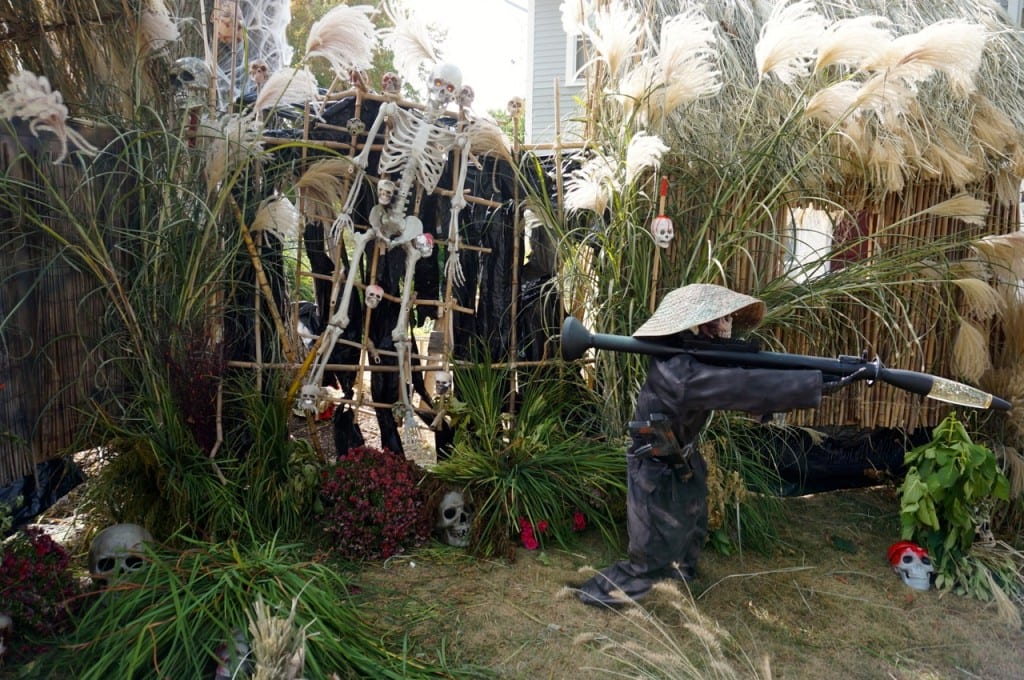 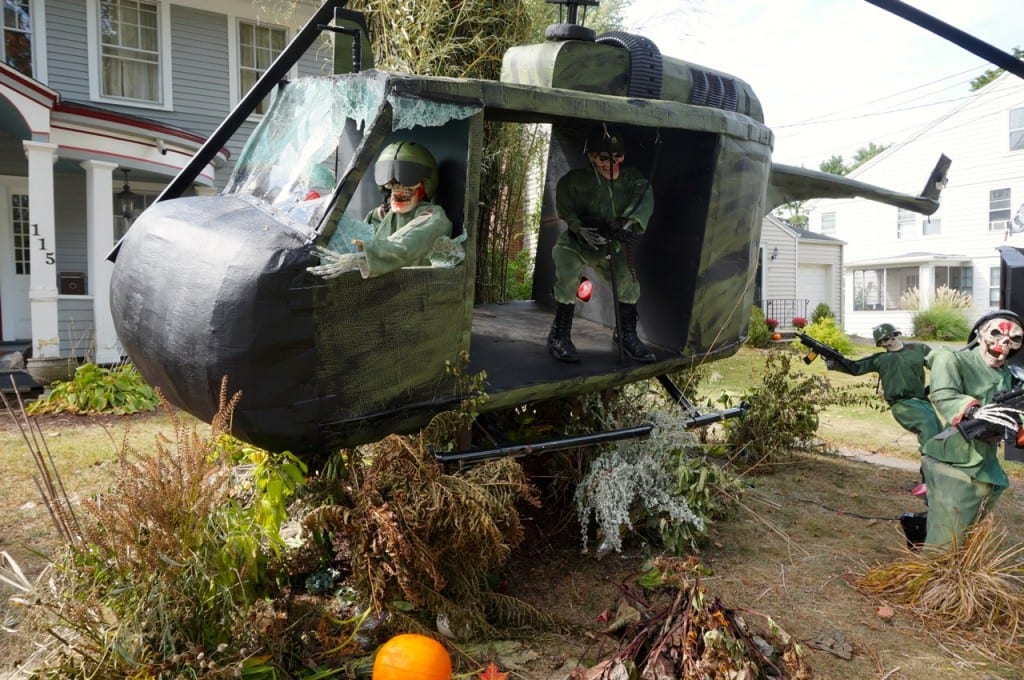 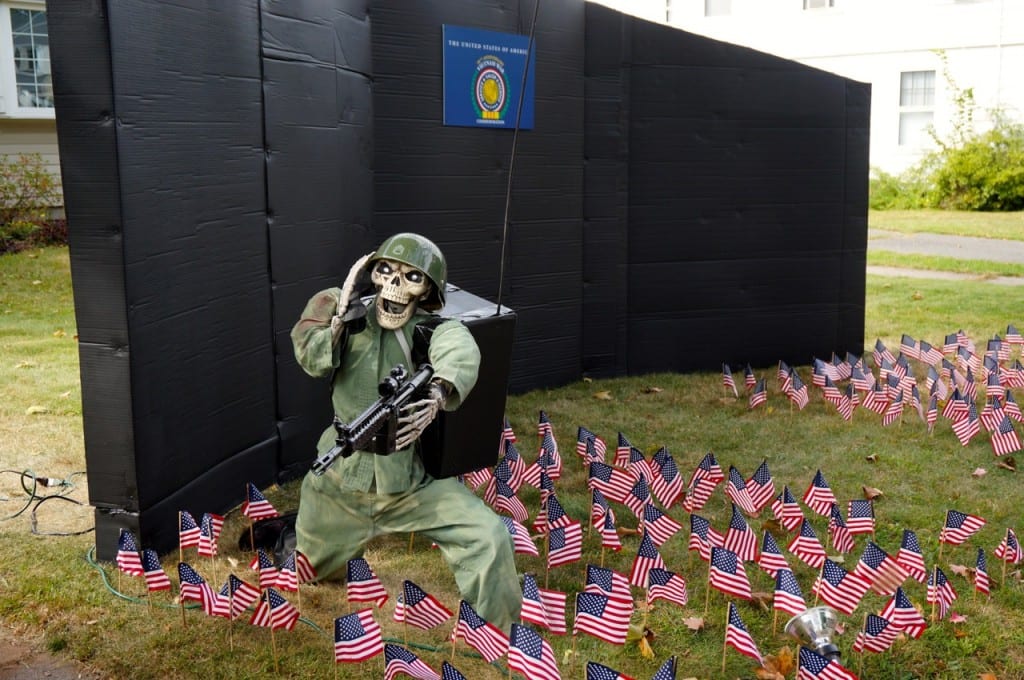