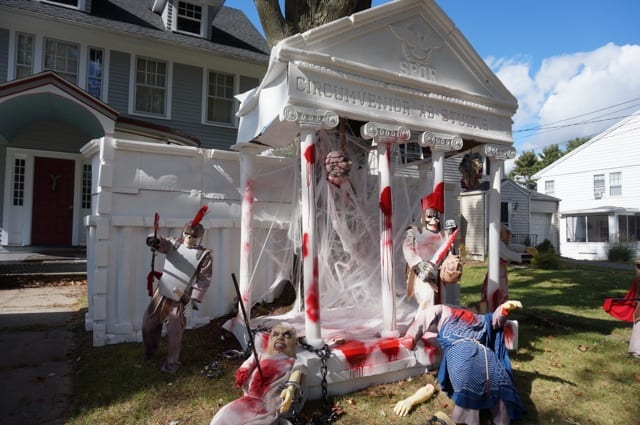 The Halloween display at Matt Warshauer’s North Main Street house in West Hartford is more elaborate than ever, but you need to understand the Latin phrases to really comprehend his covert political statement. 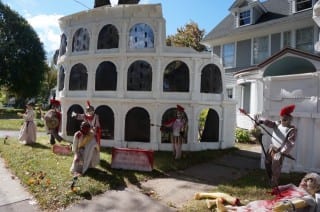 While many of us place some ghoulish decorations and/or a jack-o-lantern on the lawn in early October, it’s typically no more of a production than finding the box of Halloween items in the attic or selecting just the right pumpkin.

Warshauer, a history professor at Central Connecticut State University, has lived in West Hartford for more than 15 years and has always liked decorating for Halloween, but said that his displays became more and more elaborate and “outwardly politically aggressive” during the past 10 years, especially during the presidency of George W. Bush.

“I’ve embraced the idea that it’s public art, it’s a statement,” he said.

This year’s display depicts the Fall of Rome, complete with a replica of the Colosseum. There are also zombies, devil ears, skulls, and amputated body parts, but they aren’t included just to add a Halloween flavor to the tablueau – they’re part of the political statement. You really need to understand the Latin phrases that are engraved throughout the display to get the complete message. [See gallery below for photos of the display.]

“With what’s going on in our government right now, the political leaders are unable to get something done,” said Warshauer. “For them to not be able to act, or to choose not to act is, I think, a deep challenge to the American experiment of self-government.”

As a professor, Warshauer focuses in part on the development of American political parties and the political system. “I’ve never been more disconcerted about the direction our nation is going,” he said. “Ask historians, and look at the fall of empires – the ingredients rarely change.”

Once Warshauer decided to use the Fall of Rome as this year’s Halloween theme, and to include Latin phrases, he spent a lot of time doing research. His daughter Emma, who is taking Honors Latin at Hall High School, was fascinated with the idea and really helpful designing the Roman “skeleton” soldier uniforms and togas for the politicians, as well as working on the phrases, Warshauer said.

Google did a fairly good job translating the Latin, but Warshauer offered greater insight. “W MISIT NOS IN ABYSSUM” reads one monument. Knowing Warshauer’s opinion of George “W” Bush helps understand why the “W” precedes “sent us into the abyss.”

“PANEM ET CIRCENSES” translated literally to “bread and circuses.” That’s a really important one, Warshauer said. “While Rome was falling and the political and social scene was in chaos, Caesar made sure people had food and entertainment as distraction,” he said. “That’s where our population is now; we don’t pay enough attention.”

Warshauer doesn’t provide the Latin translation as part of his display. “This year they’ll have to research it. That’s the professor in me,” he laughed.

Warshauer said that this year’s display was the most elaborate ever, and he credits his friend’s son, Tanner Hoelzel, as the “mastermind behind figuring out all the math for the design, making sure that each level was slightly shorter in size than the others so that it has the same visual effect as the real colosseum in Rome.” Warshauer built prefab pieces in his garage workshop, stored it on the driveway under tarps, and staged it all in his backyard before spending three days putting it all up on the front lawn during the last weekend in September. As always, it will be removed right after Halloween.

His three daughters – Emma, Samantha, and Jessica – are all helpful creating the annual display. As for his wife, Warshauer said, “If I get too politically risqué, she’ll make sure she comes in through the back door.”

Warshauer said he was told several years ago that 12,000 cars per day drive by his North Main Street house, that is located just north of Fern Street, so the display certainly gets plenty of visibility. “Some people know it’s going to be there, but some are surprised.” This year he has fog machines that helps make the display really look cool at night.

Visitors are welcome to walk through the display, Warshauer said, but you aren’t able to park on North Main Street. Parking is available on Hilltop Drive which is just north of his home.

People really appreciate it, and it’s really fun, said Warshauer. A fire truck went by the other day and they all yelled, “Happy Halloween!”

See if you can decipher the meaning of the other Latin phrases found in the display:

Let us know in the comments if you figure them out!