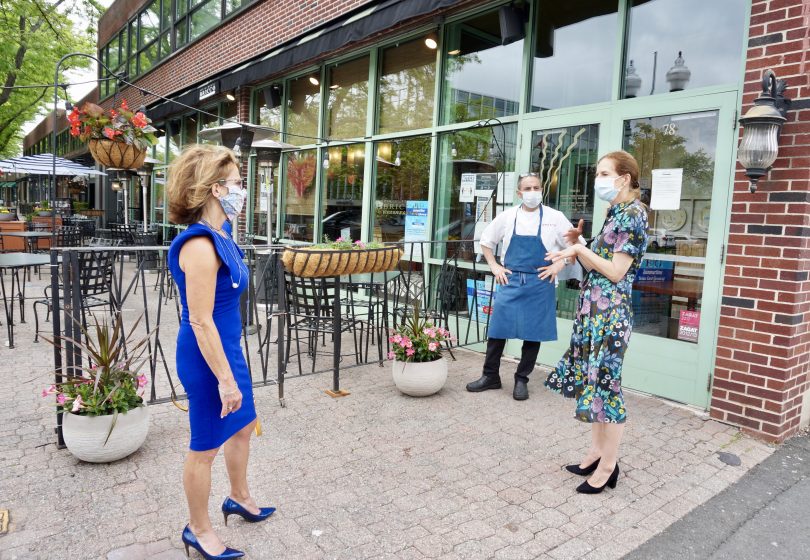 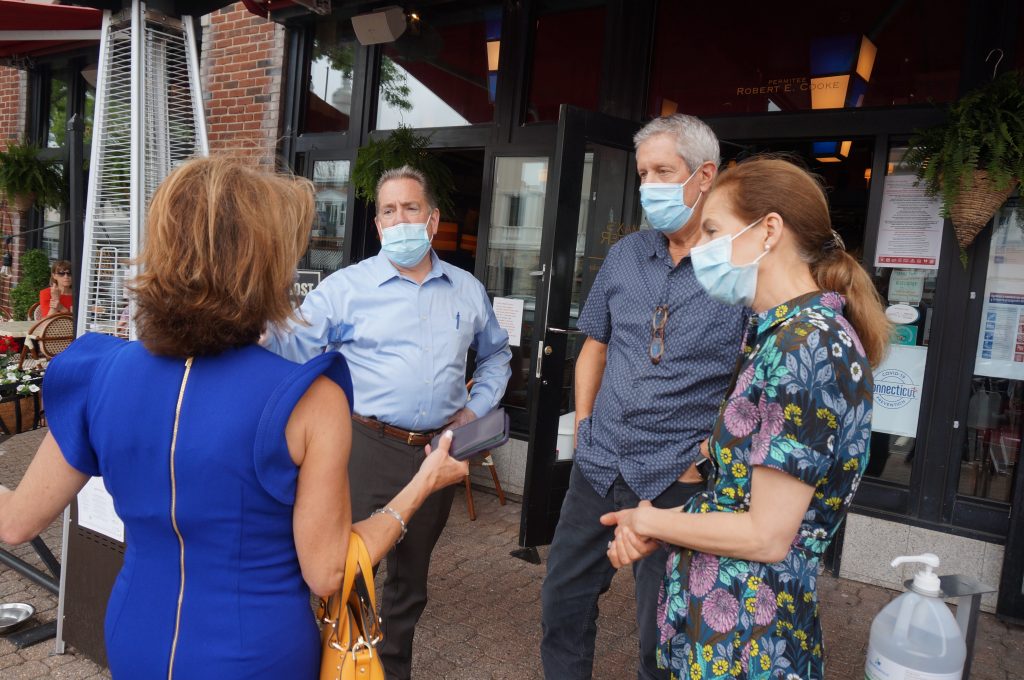 A number of West Hartford restaurants have opened up outdoor seating to the public since May 20, when Phase 1 of Reopen Connecticut took effect, and at lunchtime on a beautiful Thursday in West Hartford Center many establishments were open and serving customers.

However, it became clear as West Hartford Mayor Shari Cantor and Connecticut Lt. Gov.Susan Bysiewicz conversed with several local restaurant operators that the outdoor re-openings hadn’t done much to restore revenues to pre-COVID-19 crisis levels, and that further action is still needed to help businesses cover costs and bring employees back to work.

Billy Grant, chef and owner of Restaurant Bricco; Dorjan Puka, CEO of DORO Restaurant Group, which operates Treva, Àvert, and Zohara; and Richard Rosenthal, president of Max Restaurant Group, were among the local restaurateurs asking Cantor, and in particular urging Bysiewicz, to exert influence to accelerate the reopening of indoor dining rooms. Each asserted that they could provide safe service that complies with social distancing regulations.

Grant was the first to speak with the mayor and lieutenant governor, and, albeit remaining upbeat, acknowledged the significant financial issues the COVID-19 crisis had created for his restaurant group. Overall revenue at Restaurant Bricco is down 70% from pre-coronavirus figures, and outdoor service hasn’t done much to help those figures.

In fact, he said it’s had the opposite effect. “It’s down even more since I opened the patio,” Grant said.

The restaurant’s revenues have slipped since outdoor dining rooms opened, as in-person sales failed to offset a steep decline in the volume of takeout orders.

The same was true at Hartford Baking Company, owner Scott Kluger told Cantor and Bysiewicz when they stopped by the Farmington Avenue location. 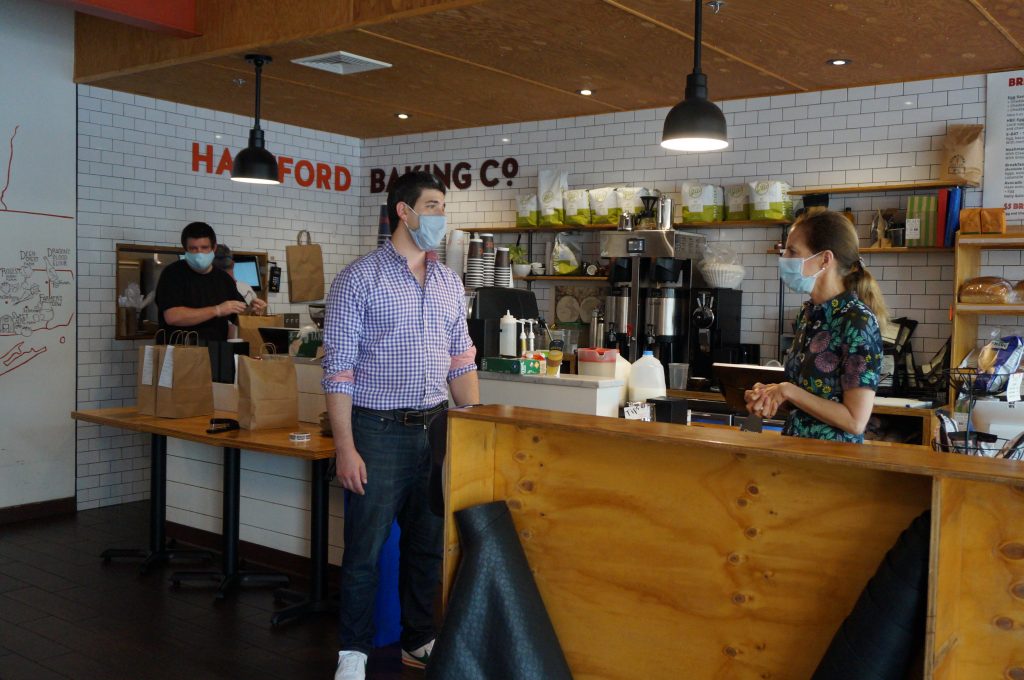 Cantor suggested that West Hartford’s consumers might have erroneously assumed that restaurants no longer needed the same kind of support following the opening of outdoor dining rooms, contributing to the decline in takeout orders. That’s very much not true for Grant and Restaurant Bricco, with Grant acknowledging that even though he has operated his restaurant in the Center for 25 years, “when you start losing week after week, month after month, it doesn’t take long,” he said, implying that restaurants could go out of business without additional financial support.

Such support could come in the form of an extension of paycheck protection program (PPP) loans, which the government has provided to small businesses during the COVID-19 crisis. To this point, small businesses have been able to borrow 2.5 times the amount of pre-crisis payroll, of which 75% had to be used to pay employees. As of today, however, that figure has been amended to 60%, which may provide more flexibility to businesses struggling to keep up with variable costs.

As restaurants wait to see if additional funds become available, both the local and state government have been getting creative in an attempt to support local restaurants. For instance, the town is about to implement a plan – the final version of which was presented to the Town Council’s Special Advisory Committee on Economic and Workforce Recovery Thursday night – to convert LaSalle Road into a one-way road, with restaurants expanding their outdoor seating onto sidewalks and into corrals on the street to take advantage of additional space. Additional dining corrals will be created on Farmington Avenue as well as an area of the western side of South Main Street just south of Farmington Avenue. (See PDF below)

This measure will help many of the Center restaurants, but will only go so far to help restore revenues. 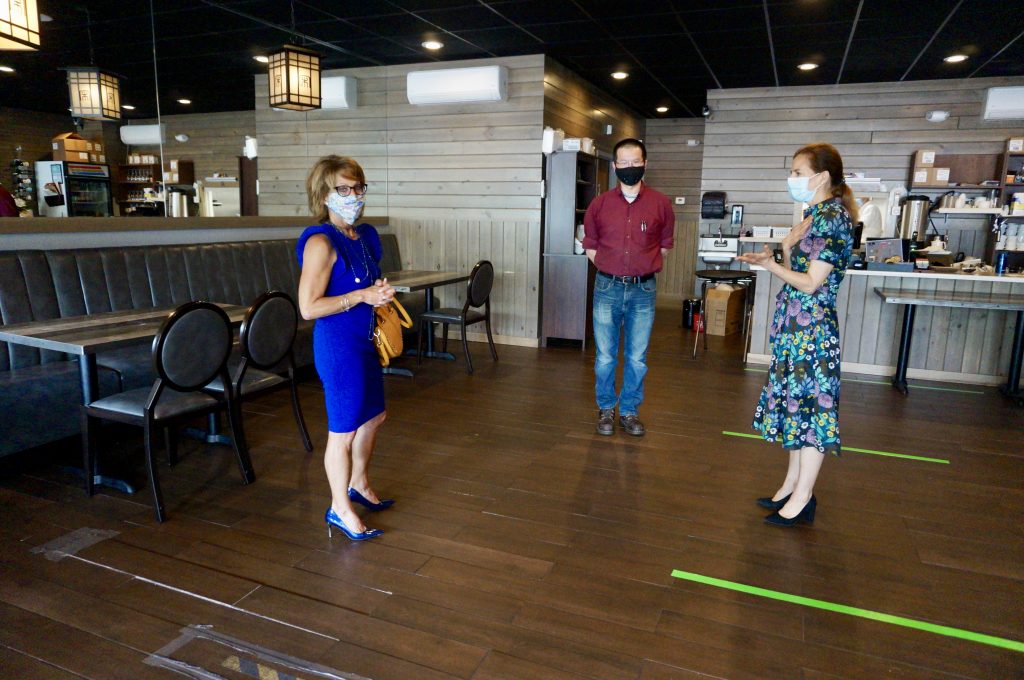 A manager at Song, another LaSalle Road eatery, told Cantor and Bysiewicz that they’d thought they would be able to add just three tables outside as a result of the extended space, and expressed concerns that the measure, which reduces the amount of parking available on the street, would bring about another drop in takeout volume.

The restaurant owners and operators were unanimous in their support for any kind of measure that would open indoor dining rooms before June 20, the date when they’d be allowed to do so under the state’s current reopening plan.

“I speak for the majority … we need the help to open inside,” said Puka, who despite having a large patio and robust take-out business said he’s seen Zohara’s revenues slip by 20% as a result of the coronavirus crisis – evidence of a troubling trend for local restaurants. 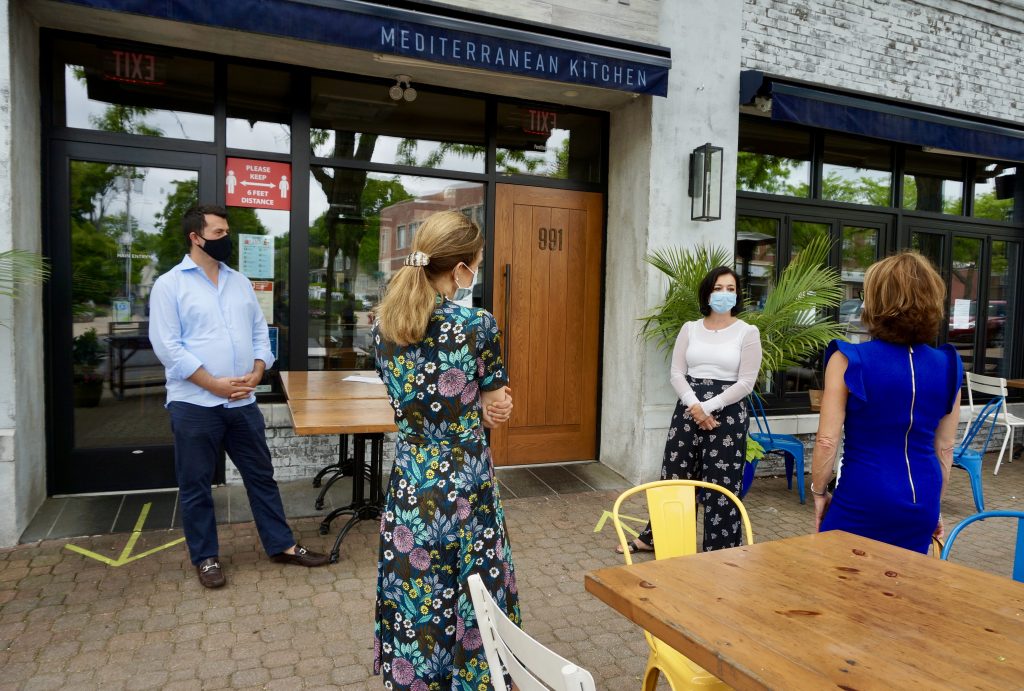 Puka, like Grant, said he could open indoors at 50% capacity and still adhere to statewide social distancing restrictions, a move that would allow him to bring back a good chunk of his workforce. All but four servers are currently furloughed, and factoring in reduced volume and lower tip amounts, many are making more money collecting unemployment benefits than they would be at work.

“Congress had a good idea to help people but they didn’t anticipate some of the consequences,” Bysiewicz acknowledged when speaking about the increased unemployment benefits.

Puka was sympathetic to the plight of his employees, and told the mayor and lieutenant governor that “we don’t want to force anyone back,” with regard to returning staff.

Puka was also in agreement with his fellow restaurant owners on the issue of PPP, and asserted that “an extension of PPP is a must” to help aid struggling small businesses.

Rosenthal, standing outside Max’s Oyster Bar with Managing Partner Bob Cooke, also lobbied the mayor and lieutenant governor to open indoor seating at restaurants, pointing to policy in Florida, where Max Restaurant Group runs Cooper, an upscale eatery, as a potential blueprint for Connecticut. There, restaurants have been able to operate at 25% capacity indoors for several weeks, which has worked out “magnificently,” according to Rosenthal.

Rosenthal even proposed a date by which he hoped the state would enact this policy: “25% by June 2nd,” he said to the mayor and lieutenant governor.

“I don’t think we should rush it, but I don’t think 25% is rushing it,” he added, noting that Rhode Island is introducing indoor dining next week. June 2 is the date the Connecticut Restaurant Association has been pushing for to allow some indoor dining, but Gov. Ned Lamont has held fast to plans to wait for Phase 2 of reopening, which is scheduled for June 20.

Moving business inside would enable restaurant owners to avoid being at mercy to the whims of the weather. Rain is in the forecast for this weekend, and the restaurant operators expressed concern that inclement weather would deal a serious hit to business.

Bysiewicz and Cantor seemed receptive to the suggestions that were made by the restaurant operators, and the former preached the importance of the restaurant industry in the context of the greater economy.

“We think the restaurant sector is a big part of the economy, and it employs over 10% of the workforce here in Connecticut,” remarked Bysiewicz. She also promised to bring Rosenthal’s “25% by June 2nd” proposal to the governor.

Cantor reinforced Bysiewicz’s points, and concluded her tour of West Hartford center with a call to action for all residents.

“Support your local restaurants. They’re our friends. … Support the local stores. They will not be here without your support.” 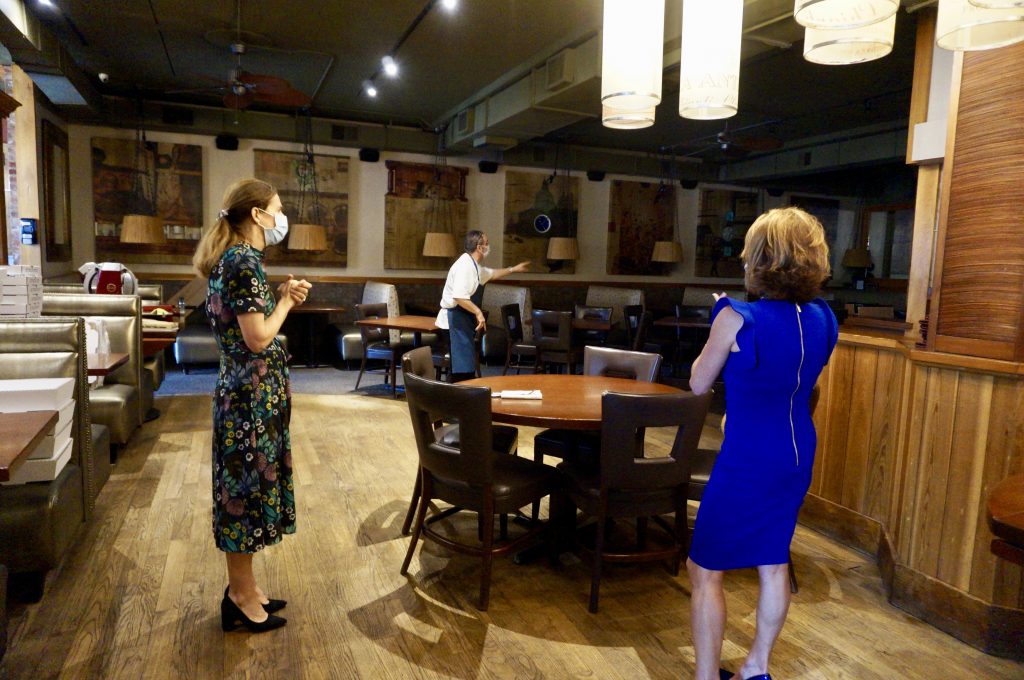